The Sports Gene, by David Epstein

Of course you don't, you believe in free will, that people turn out the way they do because of the choices they make and the impact their environment has on them and not because they were made that way. To believe anything else, you say, would be stupid.

Do you believe that great sports stars are born great or do they get to the top by virtue of hard work?

Share All sharing options for: The Sports Gene, by David Epstein 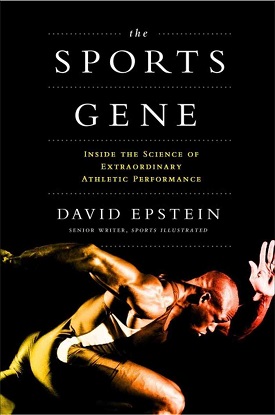 Title: The Sports Gene - Inside the Science of Extraordinary Athletic Performance
Author: David Epstein
Publisher: Current
Year: 2013
Pages: 338
Order: Penguin
What it is: A look at where genetics is currently at in terms of solving the nature versus nurture conundrum.
Strengths: Comprehensible science that doesn't treat you like a dummy.
Weaknesses: Don't expect simple - or simplistic - answers.

Wind the clock back to the rebirth of the Olympics at the end of the nineteenth century and the people competing generally tended to look like everyone else. The ideal physical type for athletes was the average physical type. If you'd popped down to the Olympic Village in London last year, you would have seen the extremes of the physical type. In the century and more between the two Games, the sports world changed. There was what Kevin Norton and Tim Olds call a Big Bang of Body Types:

"As the customer base for viewing extraordinary athletic performances expanded, fame and financial rewards slanted toward the slim upper echelon of the performance pyramid. As those rewards have increased and become concentrated at the top level, the performers who win have gotten faster, stronger, and more skilled."

Some of what has happened in sport is down to more and better training. As sport attracts more and more money, so its participants can invest more in their preparation. They can shed weight from the wrong places and pile on muscle in the right. But the manner in which sport selects its participants has also changed. Take basketball in America as a good example of this.

Something in the region of 68% of Americans are between 5'7" and 6'1" in height. Barely 5% are taller than 6'3". But the average height of a basketball player in the NBA is 6'7". Even more interesting, in 1946 the NBA had no players taller than 7'0". By the early 1980s that had inched up to 5%. Then in 1983 the NBA introduced revenue sharing and the players became partners in the league. That's when basketball's Big Bang of Body Types really took off. In just three years the proportion of seven-footers in the NBA rocketed up to 11%, which is in or around where it's at today.

The focus on height in the above example suggests that it is a key determinant when it comes to becoming a basketball player. Height, it turns out, is about 80% genetics and 20% environment (certainly in first world societies). Enough of it is down to genetics for you to say that if you aren't born with the gene for height, you're unlikely to be playing basketball (actually that should be genes plural: scientists know there's a genetic cause, but can't isolate a single gene as being responsible).

And, of course, if you happen to watch any basketball game the odds are you're going to see someone of average height in among all those beanstalks. One reason for that comes down to arm span. Most people have an arm span equal to their height. In basketball, a player who is 6'7" will likely as not have an arm span of 7'0". Nat Robinson, a basketball player who topped out just below 5'8" has an arm span of 6'1". Reach can make up for height. And, even if both your arm span and height aren't above average, you might still make the NBA if you can jump and dunk. And jumping, it turns out, can be trained.

One of the stories David Epstein tells in The Sports Gene concerns Stefan Holm, whose sport was the high jump. The high jump's route through the Big Bang Of Body Types was radically altered by Dick Fosbury, the guy who figured flopping backward over the bar offered a competitive advantage over traditional feet-forward techniques. In the eight years between the Rome Olympics, where Fosbury took away gold, and Montreal the average height of high-jumpers shot up by four inches, the flop offering an advantage to jumpers who have a high centre of gravity. When Stefan Holm got interested in the high jump one of his heroes was Patrik Sjöberg, a Swedish jumper who topped out at 6'7". The problem for Holm was that he topped out at 5'11". In the world of high jumpers, Holm was a dwarf.

But Holm was a persistent dwarf. He trained. And he trained. And he trained. And he got there. Inch by inch, year by year, Holm improved his jumping heights. He ended up being Swedish national champion eleven years in a row. At the Athens Games he took home a gold medal. Holm, it turns out, perfectly fits the model of the ten thousand hours athlete popularised by the bubble-permed pop-cult sociology gadfly Malcolm Gladwell in his Outliers.

Practice at something for ten thousand hours, Gladwell said, and you become an expert at it. Holm himself points to Outliers and the ten thousand hours theory as an explanation for his success. What Holm's ten thousand hours of effort gave him was a super strong Achilles tendon in his left leg, the one he launched off, enabling him to propel himself higher than his taller rivals. What he wasn't born with he compensated for by hard work. In the nature versus nurture debate ten thousand hours of nurturing KOs nature.

Except of course that talent - being born that way - is not enough. We all know this. You need a mix of talent and dedication in order to make the most of what you've got. The less you have of the former the more you need of the latter. For everyone the mix of the two will be different. Even the most apparently louche of sports stars - the likes of George Best, James Hunt, Shane Warne - all bolstered their innate talent with hours and hours of unseen practice. (And, to complicate things further, it turns out that trainability - the ability to respond to training - itself might actually be an innate talent, in some.)

But even with that mix of talent and dedication you still have yet to enter the real lottery at work in most sports: the opportunity to play. Take something obvious within cycling: the current renaissance in the fortunes of British cycling. Without John Major opening up the strings of the Lottery purse, it probably wouldn't have happened. And without it having happened the odds are that someone like Laura Trott - who, as everyone by now knows, only thought to try out at cycling as a way of getting out of math - wouldn't have got the chance to make the most of her talent and discipline.

Somewhere out there could be the perfect cyclist, someone blessed with all the right genes to be a campionissimo. They've got the perfect sized lungs, the right sized limbs, the right type and density of fast- and slow-twitch muscles, whatever all the right physical factors that go to making up a great cyclist are. But unless that person gets an opportunity to express themselves on a bike, all those genes aren't going to matter an awful lot. In the nature versus nurture argument certain environmental factors are always needed in order to allow innate talent to flourish.

Epstein himself doesn't tend toward cycling examples in The Sports Gene. His main focus is track and field, with a smattering of references to American ball sports. But all the stories he tells offer lessons that can be applied to multiple sports, our own included. The more you yourself can bring to the table when reading a book like The Sports Gene the more you are likely to get out of it.

Perhaps the most interesting thing in almost all of Epstein's case studies is that they all start with an athlete and ask if there is a genetic explanation for their athleticism, ask whether there is a sports gene. But this is like starting one of those maze puzzles at the end and working outward. How about doing it the other way around? Well, genetics simply isn't that advanced yet. It can help tell us why sports stars are great, but it can't yet tell us whether individuals will become great sports stars.

The fact that there are so many variables at play in these things - both within an individual's genetic make-up and between nature and nurture - makes The Sports Gene a challenging read. There is, obviously, no sports gene. For every sport you have to work out what genes are present that give specific advantages. Then you have to allow that there are numerous possible advantages that can be exploited in a single sport (most all cycling fans by now know that sprinters tend toward fast-twitch muscles while those specialising in endurance tend toward slow-twitch). So not only is there no sports gene, there's no cycling gene, no baseball gene, no athletics gene. There's no specific gene for specific sports.

Epstein looks at different points where sports and genetics meet by looking at numerous case studies. These allow him to put a human face on virtually all the hard science bits, making it all seem easy. So, for a science book, The Sports Gene is accessible, in the realm of books by the likes of Malcolm Gladwell or his Freakonomics counterparts Stephen Dubner and Steven Levitt. But it is also a somewhat aimless book, taking a rather meandering path through issues that don't always offer clear answers and don't always seem to come to a clear and concise point.

That The Sports Gene is challenging isn't a criticism. What Epstein is doing is showing how science itself progresses, following one theory, building up more evidence, and maybe finding that a different theory fits better. Epstein is simplifying a complex subject without dumbing it down. And the area of science that Epstein is looking at - genetics - has been going through a period of radical change in the decade or so since the mapping of the human genome was completed. Ultimately what this means is that while The Sports Gene is low on specific answers - we're only slowly beginning to realise we've maybe been asking the wrong questions - it is high on insight and challenges you to consider alternative ways of looking at some familiar questions. Questions which are increasingly being asked in cycling as we slowly move away from the era of Gen-EPO.