The Curse of the Rainbow Jersey, by Graham Healy

Share All sharing options for: The Curse of the Rainbow Jersey, by Graham Healy 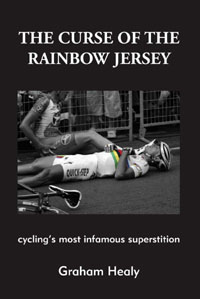 Title: The Curse of the Rainbow Jersey: Cycling's Most Infamous Superstition
Author: Graham Healy
Publisher: Breakaway Books
Year: 2013
Pages: 189
Order: Breakaway Books
What it is: A look at the more famous cases linked to the curse of the rainbow jersey
Strengths: Fans of Les Woodland's Crooked Path to Victory will appreciate this collection of Worlds-themed cycling anecdotes.
Weaknesses: It's a book that wants to have its cake and eat it, at the one moment celebrating the curse and at the other pointing out it is mere superstition.

There are certain cycling superstitions that seem quaint and are worth defending, such as the way some riders choose the wear the thirteen dossard upside down. Equally, some people like the way certain riders carry good luck tokens with them, such a child's soother, because we all know how cute this looks if that rider wins the stage and takes it out. And, of course, the sight of riders blessing themselves before the off simply warms the cockles of our hearts and reminds us that cycling is a very, very Catholic sport.

The curse of the rainbow jersey is simply one of those pieces of Polyfill cycling fans and writers use to fill the dull bits of the season. It's August, there's nothing to write about and the reigning world champion isn't having a great season? Let's talk about the curse of the rainbow jersey! (Were the Tour a few weeks longer and in desperate need of stories to fill the dull bits the curse of the yellow jersey might actually take off as a similar piece of Polyfill.) Or you use the curse as a way to analyse the current world champion's season without actually having to do any analysis of the current world champion's season. All you need do is wither on and on and on about the usual handful of names most closely associated with the curse and ignore all the obvious reasons for one season not being as successful as another for a rider. And you especially ignore the fact that, the world championships apart, the current champion is probably having a season pretty much like his previous one.

The curse of the rainbow jersey, it's one of those things to talk about when you don't really want to talk about anything but feel the need to make some noise.

Not being a fan of the curse of the rainbow jersey and believing that most people who wither on about it need to be whacked upside the head with a rolled up copy of L'Équipe is, you could say, something of a handicap when it comes to reviewing a book about the curse, especially when that book is actually called The Curse of the Rainbow Jersey. And you'd be right. It's a major handicap. Which I'm sure you'll bear in mind between now and the end of this as I try and park my prejudices and whiz through an outline of the book's contents.

Graham Healy - author of Shay Elliott: The Life and Death of Ireland's First Yellow Jersey - opens The Curse of the Rainbow Jersey with a brief history of the Worlds. The first official world championships, as we all know, were held in Chicago in 1893, shortly after the creation of the International Cycling Association, the precursor of today's UCI (there had been any number of unofficial world championships before that, too many to think about). These first Worlds were track events, and limited to amateurs. Professionals got their own Worlds in 1895, but they were still limited to track riders. It was 1921 before a road Worlds was created. That, though, was restricted to amateurs and it was 1927 before the professional road Worlds came along and official history begins.

While we all know the origin stories for the maillot jaune and the maglia rosa, no one seems quite sure of the origin of the maillot arc en ciel. The colours are said to represent the five continents, the same as in the Olympic rings, but the sequence differs from that of the Games. No one seems to know whose bright idea the jersey was. Everyone seems to say that Alfredo Binda, winner of the first professional road Worlds, was the first wearer of the jersey. How - or even whether - previous world champions in other disciplines were rewarded is not noted. Nor does anyone ever seem to address the question of whether the rainbow jersey was immediately used by other disciplines or only adopted later. Such things we just don't know. And still don't know even after reading a book about the rainbow jersey.

After that brief history lesson we move on to the meat and two veg of the Curse of the Rainbow Jersey, some stories of those who have worn the arc en ciel, fourteen in all. The first seven of these cover the years 1955 through 1987, Stan Ockers to Stephen Roche by way of Benoni Beheyt, Tom Simpson, Harm Ottenbros, Jean-Pierre Monseré and Freddy Maertens.

Ockers, the 1955 world champion, died in a crash in the autumn of 1956, after his stint in the rainbow jersey was over, "and in doing so became the first cyclist linked with the curse of the rainbow jersey." Beheyt is the guy who pulled a fast one on Rik van Looy in the 1963 Worlds and was subsequently frozen out of the peloton by a pissed-off - but powerful - Rik II and quit the sport in 1968. Tom Simpson was world champion in 1965 and immediately won the Giro di Lombardia while wearing the maillot arc en ciel. He died in 1967. Harm Ottenbros is one of those riders who shows that the Worlds can be a bit of a lottery, he being a competent round-the-houses rider who put himself in the right spot on the day of the 1969 Worlds but never really managed to find that spot again. Jean-Pierre Monseré is - I think - the only reigning road champion to die while actually wearing his rainbow jersey, he having won in 1970 and then been killed in a pre-Primavera leg-loosener, the Grote Jaarmarktprijs, in March 1971. Freddy Maertens is a contradictory story, he having won in 1976 and then gone on to have a brilliant season in 1977, but when he then won again in 1981 that was pretty much the last important win of his troubled career. Stephen Roche is the guy who went through a series of on-again off-again seasons, scoring big in one on-again season before hitting the snooze button after that.

The next seven stories come from the years 1990 through 2007, Rudy Dhanens to Paolo Bettini by way of Luc Leblanc, Laurent Brochard, Igor Astorloa and Isaac Gálvez. Dhanens was another one of those unexpected world champions. Leblanc - the 1994 champion - had the misfortune to sign for Le Groupement (as did a lot of non-world champions). Brochard won in 1997 and was caught up in the following year's Festina affaire while Astorloa won the year before he was caught up in the Cofidis affaire. If you don't know who Gálvez is don't worry, he really shouldn't be in a book about the road Worlds given he raced on the track. As for Bettini, well a few days after he won his rainbow jersey his brother died. He then went on to win the Giro di Lombardia and the following year became only the fifth rider to achieve back-to-back Worlds wins (after Ronsse, Van Steenbergen, Van Looy, and Bugno).

These second seven stories do give The Curse of the Rainbow Jersey the feel of one of those Channel 4 'Great British Sitcom' programmes where the public is asked to name the best sitcom of all time and half the series' they come up with were made in the last five years. Or one of those memory-challenged book lists where only stuff published in the last eighteen months gets recalled, along with the obligatory three or four genuine classics. Or any Golden Oldies radio station that lists the top one hundred songs of all time but somehow fills the top ten with hits from the last five years. Somehow we managed to get through the first three decades of the world championships before getting to one worth recalling - Ockers - and yet we end with seven pulled from the last two decades: a case of goldfish memory syndrome perhaps?

These fourteen capsule biographies are rounded out with a chapter which runs through other possible candidates for the curse, such as Ercole Baldini (1958), Eddy Merckx (his first few rainbow jerseys came without a curse, but not the last in 1974), Joop Zoetemelk (1985, like Maertens, practically a pensioner when he won), Maurizio Fondriest (yet another unlikely world champion, in 1988), Greg LeMond (1983 and 1989 - I love that LeMond is included in lists of the cursed, given his accident happened in between stints in the jersey), Gianni Bugno (after his back-to-back wins in 1991 and 1992), Lance Armstrong (struck down by cancer three years after his 1993 victory), Johan Meseeuw (1996), Romāns Vainšteins (2000), Óscar Freire (1999, 2001 and 2004) and Alessandro Ballan (2008).

And then there's the winners who can't be linked to the curse: "it appears at a quick glance that as many cyclists enjoy success during their year in the rainbow jersey as difficulties. However, the successful cyclists are often overlooked - they just don't align well with the hypothesis favoured by journalists writing articles on the curse." (Or, for that matter, with the hypothesis of authors writing books about it.)

The final three chapters of The Curse of the Rainbow Jersey look briefly at cycling superstitions, other sports that are prone to irrational fears and, finally, an explanation that the curse is all down to confirmation bias, the nocebo effect or the distorting filter of the media lens. Essentially, after a hundred and seventy pages bigging up the curse, you're told there is no curse. Which, frankly, seems a bit like an even bigger con job than the curse itself.

Really what the Curse of the Rainbow Jersey seems to want to be is a small selection of Worlds stories - A Brief History of the Worlds - that includes a discussion of the curse, rather than be a book that is about the curse itself. Were it actually this - and included some of the less talked about Worlds episodes alongside the staples - it would be a more interesting read, similar to, say, Les Woodland's recent Paris-Roubaix history. The Worlds is a race crying out for someone to tell its story. The Worlds is the race that rips bare the deceit at the heart of cycling, shines a spotlight on the quintessential dichotomy at the heart of our sport, the struggle between the team and the individual. It's a race that's full of stories, only some of which have yet been told.

As it is, The Curse of the Rainbow Jersey is more like Woodland's earlier The Crooked Path to Victory, a light romp through some darker tales from cycling's past that packs plenty of anecdotes within its couple of hundred pages and will serve for many as a useful introductory guide to the Worlds' wealth of tales.