Inside Team Sky, by David Walsh

Share All sharing options for: Inside Team Sky, by David Walsh 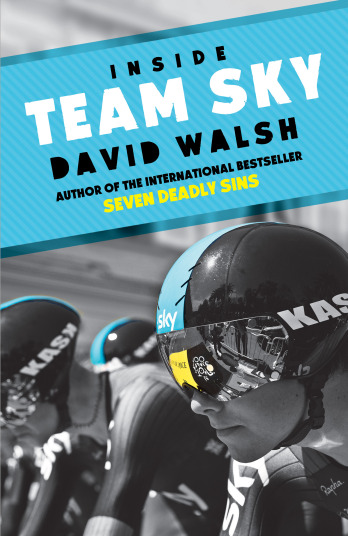 Title: Inside Team Sky - The Inside Story of Team Sky and Their Challenge for the 2013 Tour de France
Author: David Walsh
Publisher: Simon & Schuster
Pages: 337
Year: 2013
Order: Simon & Schuster
What it is: David Walsh goes inside Team Sky
Strengths: It's David Walsh, the big bad Irish wolfhound, the Torquemada of the Armstrong Inquisition.
Weaknesses: Walsh's need to believe blinds him to deficiencies in his argument.

"It may transpire in years to come that some of these things which you believe to be true are actually true. I don't think they will, but it would be derelict today for any journalist not to ask questions. Yet to close the mind off to the possibility that this is an interesting man, a man with a great story and an outlier in his sport - that would be to let Lance Armstrong win twice. That would be to let Lance's toxic cynicism enter your skin and your system like the waterborne parasite that you say Chris so conveniently suffers from. You once loved this sport and when Lance turned out to be a phoney it hurt. So now you feel safer believing in nothing than believing anything. So Lance wins again."

The ghost of Lance Armstrong doesn't just haunt Inside Team Sky, it possesses it. And, whatever happens, whatever unfolds, the spectre must not be allowed to win. Life must go on after Armstrong as life went on before Armstrong. We must forget all about Armstrong and the evils of his era. We must believe, with all our hearts, that all is changed. We must not doubt. We must not question.

Personally, I wasn't aware that the only people asking questions of Team Sky were those whose belief in Lance Armstrong had led them to feeling hurt and unwilling to give freely of their faith. But, time and again, Walsh makes clear his belief that this is at the heart of the problem faced by Dave Brailsford's team.

"A lot of people who got fooled and refuse to get fooled again didn't want to know back then. A lot of those same people don't want to know now when there are rational arguments for not pointing the finger at every exceptional performance."

Personally, I have long believed that scepticism is a good default position when it comes to cycling, that one should approach every team and every rider without belief one way or the other and let their words and deeds sway you, base your belief one way or the other on evidence. But in Walsh's view all who ask questions of Team Sky are cynics. Well, all bar one. In all of Inside Team Sky I noted just one sole instance where scepticism was acknowledged as a legitimate position. That sole sceptic was none other than the author himself.

"I'm not just entitled to my scepticism, it is my job to have it with me at all times. We've all been fooled, duped and suckered by this race. 'For years they fucked us,' Jean Michel Rout, a colleague at L'Équipe once said. I never forgot that."

It strikes me as funny that even Armstrong, in his speech from the podium in 2005, acknowledged that there were cynics and sceptics assailing him, while Walsh - sceptic-in-chief in those years - sees only cynics assailing Team Sky. But then it also strikes me as funny that Walsh has chosen to replace Armstrong's army of trolls with his own mob. The words change, but the argument remains the same: if you're not with me, you're against me.

"For Rod Ellingworth, Team Sky's master planner, the road book is the bible. So on the day he gets it, he riffles through the pages, checking the details that underpin his planning. He gets to page 46 with its photo of Virenque and it disgusts and confuses him. Ellingworth can be diplomatic, understated and restrained when talking about most things. Doping is different and in his eyes Virenque has stood for everything he despises about the sport. He stops at page 46, turns the page over to check there's nothing too important on the other side, and tears Richard from the book and bins him."

It's certainly a picture that would renew your faith in Sky's much vaunted zero tolerance policy, no man who hates dopers so much that he could tear a page from the bible could possibly work for a team that is itself doping. However it is also a picture that should be contrasted with another: that of Ellingworth preparing for Project Rainbow with a celebration of the life and achievements of another infamous doper, Tom Simpson. There are good dopers and there are bad dopers. All doping is not evil. Needless to say, Walsh is blind to this. In Walsh's black and white world of cynics and the faithful - them and us - there is no room for the questions such shades of grey raise.

As if the weakness of Walsh's arguments, added to Inside Team Sky really being about Armstrong, is not annoying enough, you have also got to contend with the author's self-satisfaction. Written at the height of his Seven Deadly Sins victory tour, Walsh is in full-on self-congratulatory mode throughout, so full of himself that the smugness flows over into the book, staining its pages.

"I sit silently, letting two of the best brains in the business air their thoughts, hopes and nerves without interruption. As I look out upon Auvergne's hills and pastures, post-stage analysis as my sound-track, I am acutely aware of the access I am enjoying. Other journalists will now return to their hotels for another round of dinner, sleep and breakfast with only their speculations to cling on to between stages and press events. Instead, I live among the riders, coaches, managers, mechanics and carers that keep this team in the yellow jersey, following the Tour from inside Team Sky."

From time to time, embedded journalists have produced good cycling books, even when they have surrendered their objectivity at the door. Jeff Connor's Wide-Eyed and Legless (and his more recent Field of Fire) comes to mind here. Inside Team Sky falls somewhere between Daniel Coyle's Lance Armstrong's War and Bill Strickland's Tour de Lance, Walsh being a journalist who seems to be searching to get his mojo back and wants to believe the story being sold (although, in fairness, Coyle probably made a bigger effort to at least look like he was being balanced and objective). Strip the book of its Armstrong content and Inside Team Sky bears a close resemblance to Walsh's earlier Inside the Tour de France, telling its story by telling stories about people. Back then, Walsh wrote lovingly of men like Nicolas Terrados, today it is Alan Farrell. What it isn't is Richard Moore's Sky's the Limit, Walsh preferring to tell where Moore tried to show.

In the book's finale, Walsh notes that the invitation to embed himself within the team for eight weeks left him in two minds. On the one hand he was "keen to fall in love with the sport again." On the other, "to see the sport screwing its people all over again would have been too much." At the end of his two months as an embed, Walsh believes he has found a new hope, proof of Sky's integrity, met people he can believe in. The team makes mistakes - Gert Leinders, Jonathan Tiernan-Locke, the feud between Bradley Wiggins and Chris Froome - but they make an effort to learn from those mistakes. But Walsh's faith is such that he doesn't want to just present the facts and the feelings he based his judgement upon and leave the reader to make up their own mind, to judge for themselves. His new found faith is so strong that he must insist that his reader believe too, deny his reader the room for the doubt he himself felt was justified.

It may transpire in years to come that Walsh's faith in Team Sky is proven to have been fully justified, that the years in which our sport was a pharmacy on wheels are firmly behind us and Sky's medicine cabinet contains nothing more than Lemsip and Neurofen. Hopefully by then it won't all be about Armstrong and we will have realised he is not the alpha and omega of doping, the beginning and end of doubt and the sole reason some people choose to ask questions.