Share All sharing options for: Sport in Capitalist Society, by Tony Collins 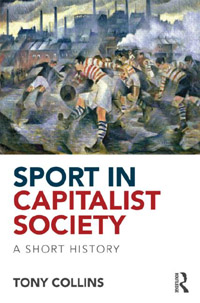 Title: Sport in Capitalist Society - A Short History
Author: Tony Collins
Publisher: Routledge
Year: 2013
Pages: 178
Order: Routledge
What it is: An attempt to explain how the emergence of modern sport around the world is as much a product of capitalism as the factory, the stock exchange or the unemployment line.
Strengths: It used to be that books such as this were written by people - whether they be of the left or right - who hated sport. Collins is very firmly not in this camp.
Weaknesses: If you believe that sport and politics exist in two distinct spheres, this isn't the sort of book that's going to please you.

It is a fact universally acknowledged that it were all a lot better when me dad were a lad. This is particularly true where sport is concerned. Our sporting world today has been taken over by corporate interests, has lost touch with its roots, we have sold the heritage our fathers left us for a pocketful of TV rights. Everyone knows this to be true. Everyone believes this to be true. But in Sport in Capitalist Society Tony Collins paints a different picture:

"The idea that sport has been hijacked by team owners or commodified by corporate interests fails to understand that modern sport is itself a creation of capitalism. There was no prelapsarian era in which football, baseball or any other modern sport was played by people purely for enjoyment."

A professor of history at De Montfort University in Leicester, in Sport in Capitalist Society Collins traces the history of modern sport, linking that history at all times to economic history and focusing on the major trends that have shaped the modern sporting world. Central to Collins' picture is the argument that modern sport emerged first in Britain and from there - through trade and empire - spread around the world. Borrowing from Spinoza, Collins says that the goal of Sport in Capitalist Society "is neither to cheer nor to jeer sport, but to understand it."

The idea that sport is capitalist construction is bound to offend some. There's something about the c-word that just gets people's backs up. But Collins' history shows that modern sport, from the get go, was linked to trade, a product of trade. That modern sport developed first in Great Britain is equally likely to offend some. All societies have always had a sporting aspect, their people have always played games. But the argument made by Collins - that the position Great Britain found itself in at the end of the eighteenth and early into the nineteenth century created a fertile breeding group for modern sport to develop and grow - is worth paying attention to.

The modern sports Collins is talking of - in particular horse racing, boxing, football but also, indirectly, baseball and basketball - must be seen as being separate and distinct from the games of yore. The development of a capitalist society drove out the games of old and - even though not all captains of industry saw value in sport - the modern variety of sport was able to prosper by being adaptable to changes in society and the social order. This it was able to do by being able to portray itself as having something to offer society's changing needs.

The games of old can be differentiated from modern sport by the fact that "they were not generally codified, organised on a commercial basis nor seen as separate from everyday life." Through the eighteenth century (around about the 1750s) three sports in Great Britain - horse racing, boxing and cricket - became commodities "which one might pay to watch, be paid to play or upon which one could gamble significantly large amounts of money." That commercial development led to the codification of rules. Modern, rule-based sports didn't arise as part of some 'civilising' process - as many contend - but rather out of the drive for profit.

Of course, for modern sport to have developed the way it did, it needed a number of factors running in its favour. One of these was the rising belief - probably best expressed by Thomas Hobbes in Leviathan - that "the natural state of humanity was a 'war of all against all.'"

"Sport, an activity that was by its very nature a competitive win-lose binary, therefore underwent a social amplification of its importance. Man against man (women were rarely considered), whether in the prize-fighting ring, on the race course or in the cricket team, was no longer merely a recreational pleasure. It was now also a metaphor for, and a reflection of, everyday life in capitalist society."

Related to this is another important factor, the rise of the popular press:

"Indeed, sport would not and could not have been commercialised or codified without the simultaneous development of newspapers and magazines. This would become an iron law of sport. As we shall see, in eighteenth century Britain, nineteenth-century USA and twentieth century France and Japan, the press was both the driver of commercial sport and also its beneficiary - as would be the case for radio and television in the twentieth century. Even in the first half of the eighteenth century newspapers raised revenue from sport through advertising, but also generated significant column inches from report on sport. Conversely, sport received publicity for events but also just as importantly, became an everyday discourse."

(This point most cycling fans understand perhaps better than fans of other sports, given our knowledge of the roles played by newspapers from Le Vélocipède Illustré to Véloce Sport and Le Petit Journal, through L'Auto, La Gazzetta dello Sport and Informaciones, in the creation of bike races. Furthermore, it was a group of newspapers clubbing together in 1948 to create a cohesive European road-racing calendar - the Challenge Desgrange-Colombo - which laid the foundations for today's World Tour (via the Super Pernod Trophy, the World Cup and the ProTour). It was a newspaper - L'Équipe - that developed the sport's current globalisation strategy (being French they naturally had their own word for it, mondialisation). Bike racing, cycling fans know, has always been a media-driven business, always been about generating profit for media companies.)

The business roots of modern sport Collins deals with in the first of Sport in Capitalist Society's fifteen chapters and through the rest of the book he looks at how sport developed from those early roots to the become the system we know today. Along the way Collins looks at things like nationalism and amateurism, the role of women, racial politics and the manner in which sport has been used to both push forward and push back in the area of civil liberties. While sport may have changed a lot in the last two or three hundred years, it has managed to stay remarkably true to its capitalist roots:

"the global mega-sports event has come to be a passion play of celebration of and deference before the world capitalist order. And sport, like its capitalist progenitor, has established itself 'over the entire surface of the globe. It must nestle everywhere, settle everywhere, establish connexions everywhere.' In the first decade of the twenty-first century, the bond between sport and capitalism that was established in the eighteenth century had never been stronger nor more apparent."

Why should cycling fans care about the capitalist roots of sport in general given we are only all too aware of the capitalist roots of our own sport? Because cycling does not exist in a vacuum. It influences the world it inhabits and is in turn influenced by that world. Most books looking at the history of cycling - with a few notable exceptions - tend to see cycling in isolation. When trying to understand where the sport came from and how it developed this approach tends to hide more than it reveals. Every now and then, it's worth stepping back and trying to see how cycling fits into the wider world of sports. The riders' protest at Valence-d'Agen in the 1978 Tour de France, for instance, can be seen in a different light if you set it against the agitation that had been going on in tennis, baseball and soccer over the previous decade to bring about fair pay. From George Eastham in 1963 though Billie Jean King in 1967, on to Curt Flood in 1969 and Eamonn Dunphy in 1976, 'labour' was organising itself more and more in other sports, while cycling was late - very, very late - to the game.

And, of course, Collins' concluding chapter - What Future For Sport? - is, perhaps, its most important for cycling fans in an era in which the governing body is hell bent on globalisation and team owners are trying to portray themselves as the oppressed of the earth, demanding of race organisers a seat at the feast and not just crumbs from the table and threatening to withhold their labour if their basic human rights - fair pay for fair play - are not honoured. While cycling has never stood still, has been constantly evolving, it is perhaps fair to argue that it is today undergoing a period of change equal to, if not in excess of, that which it underwent in the 1980s. Understanding the past, across a broad range of sports, might help us understand our own future.

The future for sport in general, Collins suggests, will repeat much of what we have already seen in the past. Media and nationalism will continue to play major roles in both the funding and promotion of sport and sport will retain its essential conservatism. Perhaps the biggest, unpredictable factor in sport's future is the nature of society's attitude to capitalism itself. Maybe lessons will be learnt from recent economic history and that relationship will change, unleashing further change on sport. Whatever does change though, sport - despite all the perceived ills it carries in its capitalist genes - is unlikely to disappear:

"sport is unlikely to lose its appeal, even in a society where unceasing competition has been replaced by cooperation. Its ability to offer the emotional experience of triumph and tragedy to participants and spectators is too potent."