Tour of Flanders: The Inside Story, by Les Woodland

A brief history of the race they call the Ronde.

Share All sharing options for: Tour of Flanders: The Inside Story, by Les Woodland 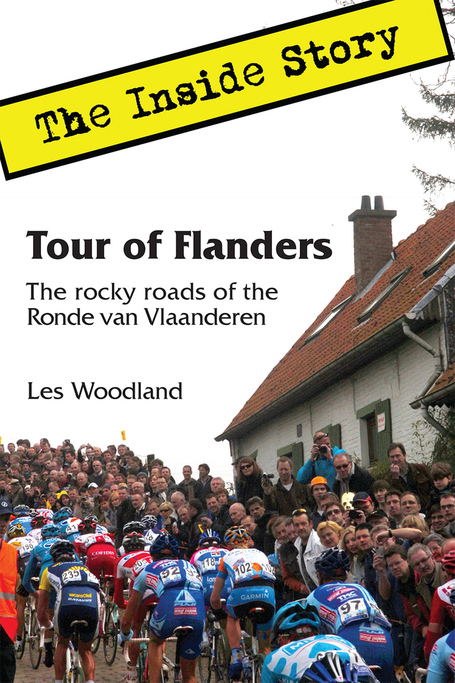 Title: The Tour of Flanders: The Inside Story - The Rocky Roads of the Ronde van Vlaanderen
Author: Les Woodland
Publisher: McGann Publishing
Year: 2014
Pages: 155
Order: BikeRaceInfo.com
What it is: a history of the race they call the Ronde
Strengths: It's a feast of cycling anecdotes that help tell the story of the Ronde.
Weaknesses: Personally, I would have liked a few more facts about the hills that make the Ronde the race it is.

Michele Acquarone, the deposed head of RCS Sport, said recently that there are only four races that actually matter: the Tour de France; the Giro d'Italia; Paris-Roubaix; and the Ronde van Vlaanderen. How the Tour and the Giro came to have the fame they have is a story well told, as is that of Paris-Roubaix. The Ronde though... well there's a race with a history many cycling fans have yet to fully grasp. To help rectify that, Les Woodland follows up his recent Paris-Roubaix: The Inside Story with Tour of Flanders: The Inside Story.

At the heart of today's Ronde is the Flemish Ardennes, a tiny area of a tiny part of a tiny country, stretching 30 kilometres east (Ninove) to west (Kluisbergen) and 20 kilometres north (Oudenaarde) to south (Renaix). And within the Flemish Ardennes is the beating heart of Belgian cycling, little hills - air-bubbles on the pancake-flat landscape - that rarely climb more than a hundred metres into the sky but are to the Ronde what the Alps, the Pyrénées and the Dolomites are to the Tour, the Vuelta and the Giro. These are the hellingen: bergs and mûrs, koppen and bergen, short, sharp, shocking little hills, roughly surfaced and horrible to ride. Marvellous.

The koppen and bergen - like the Pyrénées and the Alps at the Tour - were not originally part of the Ronde's formula. Woodland notes that, in reports of the first two editions of the race (1913 and 1914), there is no mention of any hills whatsoever. They only began to appear when the race resumed in 1919 after the Great War, and even then weren't a major feature of the race, encompassing then only the Tigemberg and the Kwaremount. The Kruisberg appeared at the end of the twenties and became a fixture in the thirties, but right through to the end of the forties, the Ronde only took in three or four hills. No, for the first few decades of the race's history, the real stars of the race were the rough roads and the wind.

As with Paris-Roubaix - which early Ronde's imitated and prepared riders for - the character of the race really began to change in the years after the Second World War when the cobbled roads began to disappear. The Ronde had used these roads simply because they were there, they were what roads were like, it hadn't been a conscious decision to make cobbles part of the race. But when the cobbles began to go away, then they really became a part of the race. You can see the effect of their loss in the race winner's speed, rising, rising, rising, through the fifties and sixties until Jo de Roo covered the race's 272 kilometres in 1965 in a time of 5h47'29", which works out at an impressive 47 kilometres an hour (the previous year Peter Post had clocked 45 kph winning Paris-Roubaix).

Today, were someone to ride like De Roo did that Sunday in April in 1965, we'd all be looking at one and other and winking: "We know what you're riding on." Back then they knew too: asphalt. As with the Queen of the Classics, the organisers of the Ronde had an answer: hills. Well, actually, the answer was the same as Paris-Roubaix's, cobbles, but in Flanders the best place to find those cobbles was on out-of-the-way hills used only by farmers. And so the Ronde we know today - the Ronde the fans love and the riders fear - was born, the hellingen children of necessity.

Woodland's telling of the Ronde's story doesn't take in the story of every single Ronde (and, frankly, given how unimportant early editions of the race were, for this we should be grateful) but rather tries to tell the bigger story, that of the race itself, cherry-picking the bits that best fit the narrative. The Ronde only began to attain importance, gradually, in the twenties and thirties and then quickly in the forties and fifties when it was a feature of the Challenge Desgrange-Colombo (the first step on the road to today's World Tour). You only need to know the big steps here.

There are parts of this narrative approach that are a weakness: I, for instance, would have liked to have learned more about the rise of the hellingen, maybe learn a bit more about each of them and the roles they have played within the race, when they became a fixture of the race, instead of just having Woodland offer the generalisation of few hills before the thirties and lots of hills after the mid-sixties. (Woodland does tell when some hills disappear, such as the Koppenberg after a race vehicle drove over Jesper Skibby's bike in 1987 and he still strapped in to its pedals. But the completist within me, my inner anorak, really wanted to know about the less well known hills too.)

The advantage of the narrative approach, though, is the way it can be a highlights reel, the Ronde's best bits. Take the story of the 1977 race. Eddy Merckx was in decline and Freddy Maertens looked ready to step up to the plate, at least when it came to winning one day races and bagging stages and sprinters' jerseys in the Grand Tours. If you go to the Ronde's museum in Oudenaarde, where bricks record the name of every winner, you'll find two bricks for the 1977 Ronde, one for Roger de Vlaeminck and another for Maertens, who is credited with being the moral victor in a race he actually managed to lose twice.

How can you lose the one race twice? For the first defeat let's blame the Koppenberg. It was a relatively new addition to the race route (Woodland tells us it had been added the year before) and, being markedly more difficult than the hills which preceded and followed it, it created the problem of too many riders swapping bikes before and after it just to have the right gearing to get over the top. You have to remember here that these were ancient times, dark days when our ancestors had to strap themselves into their pedals, when brake cables rose up over the handlebars like McDonalds's arches and when gear changers were on the bike frame, worked by friction and - oh lord! how did they ever cope? - offered you only a selection of five cogs on your rear block. The ability to change bikes to get a really low gear probably made our ancestors feel civilised in comparison to their ancestors who had to flip a wheel to change gear. But the Ronde organisers, having already pushed back the civilising tide of asphalt, pushed back here too: there were special rules about not changing bikes before the Koppenberg.

Maertens was riding in the rainbow jersey of World Champion, and for the powerhouse Flandria squad, to which normal rules did not apply (or so they believed, anyway). And so he changed bikes before the Koppenberg. And then him and De Vlaeminck (riding in the colours of the Brooklyn chewing gum company) got away from the rest and two-upped to the finish. Well, actually (and even De Vlaeminck acknowledges this) they didn't two-up it: Maertens towed De Vlaeminck the 70 kilometres to the finish in Oudenaarde.

The illegal bike change was problematic, for it hadn't gone unnoticed. Whether a commissar saw it or whether it was brought to a commissar's attention by another team manager doesn't seem to be clear, but a race official did drive up to Maertens and gave him a bit of a bollicking for having done it. But the commissar didn't pull him from the race. And so Maertens and De Vlaeminck tandemed on, Maertens doing all the stoking, De Vlaeminck sucked along in his slipstream. Three hundred metres from the line De Vlaeminck came round Maertens - who was going to be disqualified anyway for the illegal bike change - and saluted the victory he would otherwise merely have inherited. Plus there was the 150,000 francs he'd agreed to pay Maertens for doing all the hard work. For that price of course you'd want to revel in the applause of the crowd.

That's how Maertens lost the race once. And became its moral victor, robbed of victory by a silly rule about not changing bikes. The second time he lost it came in the anti-doping control that followed: Maertens got busted for using Stimul, an amphetamine (or, as everyone who believes the pop-guns versus howitzers doping narrative likes to call it, a mild amphetamine, thus excusing its abuse). This was the year the Belgian anti-doping authorities pulled a real fast one, not letting the riders know they could test for Stimul until after they'd carried out a load of tests. Maertens himself managed to get three strikes that Classics season - Het Volk (March 5th), the Ronde (April 3rd) and the Flèche Wallonne (April 7th). Willy Planckaert, third across the line in the Ronde, second after Maertens was disqualified for the illegal bike change, also got busted. Others to fall that season included Michel Pollentier, Joaquim Agostinho and even Eddy Merckx himself (Merckx said that the tests didn't work and many believed him, even David Walsh was trotting out Merckx's claim when he tried to write-off Sean Kelly's Stimul bust in the 1980s). It was one hell of an anti-doping coup. 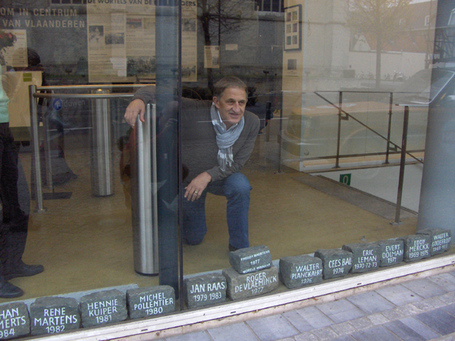 Woodland's selection of stories told is one of Tour of Flanders: The Inside Story's selling points. This is, after all, a book of cycling anecdotes and if you've read any of Woodland's other books you'll know he can take these stories far and wide, tell tales of World Championships or the Tour de France, while still telling the story of the Ronde. Within Tour of Flanders: The Inside Story's covers is a feast of tall tales, many of them actually true, some of them so unbelievable you wish they really were true.

For me, the best story told is that of the man who gave birth to the Ronde, Karel Stayert, who wrote under the pen-name Karel van Wijnendaele and was, in so many ways, the spitting image of Henri Desgrange himself (both were clerks, both dabbled briefly with riding, both wrote about the sport and both created important races and nurtured them through years of challenge and adversity). Stayert/Van Wijnendaele is one of the true characters of cycling in the early years of the twentieth century who - along with men like Victor Breyer, Alphonse Baugé and Eberado Pavesi - is often lost in the long shadow cast by the father of the Tour. The light that Woodland shines on Stayert/Van Wijnendaele's story alone is worth the price of admission and more than a good enough reason to read Tour of Flanders: The Inside Story.