A brief history of British cycling, where it came from and how it got to where it is today. 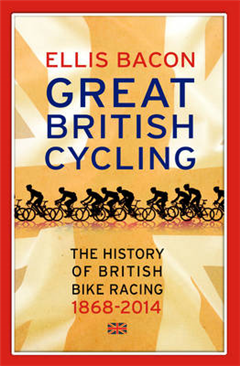 Title: Great British Cycling - The History of British Bike Racing 1868-2014
Author: Ellis Bacon (with a foreword by Brian Cookson)
Publisher: Transworld
Year: 2014
Pages: 318
Order: Random House
What it is: A brief history of British cycling, from James Moore to Chris Froome
Strengths: Doesn't try to tell the full story but rather offers up what Bacon considers to be important pieces of the jigsaw puzzle
Weaknesses: One of the curses of current British cycling journalism is the need by too many writers to place themselves into the story - to make the story about them - and Bacon here has served up a very personal history of British cycling

By now, a certain narrative has been established about recent British cycling success, one in which Dave Brailsford and Peter Keen are responsible for the national pride all the Lottery funded bangles and baubles have bought for Britain. Sometimes, the role will be noted of Doug Dailey. Often times Chris Boardman will get a very big slap on the back. The riders of the Foreign Legion and the Pioneer eras will get due credit, if they rode the Tour. And, of course, most people know that the history of British cycling began with the history of cycling itself and that first race in Parc St Cloud, when James Moore (may or may not have) won the first ever bike race, with George Pilkington Mills and Arthur Linton following in his wheel-tracks at Bordeaux-Paris (not just one of the first Classics, but a race which sometimes got called a Monument, before its demise in the 1980s). The point here is, all the key milestones in the history of British cycling are pretty well marked at this stage.

There are, though, many milestones that get overlooked in the telling of British cycling's story. Take, for instance, a favourite of mine: Teddy Hale, the Englishman who won the 1896 Madison Square Garden International Six Day Race while masquerading as an Irishman. Having covered a distance of 3,075 kilometres in those six days, that's quite an achievement. But few in the UK ever acknowledge Hale, even when talking about Six Day racing having been invented in England.

Or how about Alan Rushton?

"Alan Rushton was very much Britain's 'Mr Cycling' in the 1980s and '90s, responsible as he was for running, and securing television coverage for events like the Kellogg's city-centre cycling series (or the Kellogg's Cycling Championships, as it was officially called) in the mid-1980s, and the Kellogg's Tour of Britain in the late 1980s and early '90s, and for bringing the Tour de France to Britain in 1994."

As well as bringing the Tour to the UK in 1994, he and his business partner Pat McQuaid were also instrumental in bringing the big boucle to Ireland four years later. But it is for things many have overlooked that Rushton deserves most credit, such as his role in getting BMX tracks built in the 1980s (Chris Hoy, one of the stars of Britain's cycling renaissance, started out as a BMX bandit).

It may seem a bit apocalyptic to suggest that those criteriums Rushton helped popularise are where the sport is heading today but in one very important sense it is actually true: TV was front and centre of Rushton's mind when planning them, it was not something that was bolted on after:

"'And television, when you get to know it, is full of technical guys who are always looking to put a camera where a camera's never been before,' laughs Rushton. 'I knew that already, and I also knew that the best pictures for bike racing came from a motorbike. But you couldn't really put a motorbike in a criterium, as it would take everybody off, so we came up with the idea of a "film lane", which was a coned lane inside the criterium barriers, with the riders on one side and the camera bike on the other.' Next, Rushton got ex-riders to pilot the motorbikes, as they were capable of reading the race and would be able to guide the cameramen as to what was likely to happen and when. 'So it was a case of, "Watch Sid Barras!" or "Look out for Phil Bayton!" - something like that,' explains Rushton, 'which meant you could get the "lion leaping", so to speak. We got some great footage, really close-up.'"

The city-centre series grew over the years and eventually led to the Kellogg's Tour: a professional take on the Milk Race which, after many ups and downs, gaps, and changes in promoter - eventually - became today's Tour of Britain. And led - indirectly - to the creation of the Friend's Life Women's Tour. Now Rushton himself can't be given credit for that - no more than James Moore can be credited with leading to Bradley Wiggins and Chris Froome winning the Tour de France for Great Britain - but his role in its genesis shouldn't be overlooked.

For another of those overlooked milestones, how about a woman who helped create the Tour Fém, Millie Robinson? While she - like Hale - isn't actually in Great British Cycling - Eileen Gray is and it is debatable as to what Robinson might have achieved if Gray had not paved the way for her:

"Eileen Gray was already an accomplished track rider when in 1946 she was invited to take part in a women's race at the Ordrup track in Copenhagen, as part of a three-woman British team: Britain's first ever women's national squad. The race was just one in a programme otherwise made up of men's events - just a bit of a novelty, it turned out - but Joan Simmons, Stella Farrell and Gray took it as an opportunity not to be missed, thrashing the opposition."

That small race in Copenhagen (after many years of fighting their corner) eventually paved the way for women to compete at World Championships, for the UCI to recognise records set by female riders and - in the 1980s, by which time Gray was in charge of the British Cycling Federation - eventually for women to be allowed race at the Olympics. Some of the politics Gray had to put up with will be familiar to many today:

"Gray spent much of her career battling against [the opposition to women's cycling]. She became president of the Women's Cycle Racing Association in 1963, and [Beryl] Burton remembers her fighting the WCRA's corner when it came to finances after it had been discovered that invitations to the women's national team were simply being made to disappear at the BCF headquarters in the 1960s. 'Any team would, of course, have had to meet its own travelling expenses and, no doubt, the BCF felt unwilling to meet such expenditure,' Burton wrote in her autobiography. 'As it was one of the poor relations of the sporting life of this country, this was understandable but, as the WCRA would probably have been willing to go a long way to finding the cash, it would have been nice if we had been given the chance, at least, to do something about it.'"

Gray - along with Eileen Sheridan and Beryl Burton - is one of three women discussed in Great British Cycling. Absent is Yvonne McGregor (she is mentioned in passing, but not in detail), who for some strange reason the whole of the British cycling establishment seems to like to forget about, even though she was one of Peter Keen's guinea pigs and a holder of the Hour record. Of Nicole Cooke - heir to the thrones of Burton and McGregor - Bacon has this to day:

"For all that Cooke was a big part of the 'magical time' described by Jamie Staff [ie the Beijing Games], her achievements may never get the recognition they deserve; if women's cycling in Britain today is about to boom, and begin to get more coverage, then Cooke, who retired in 2013, might unjustly end up having been just a few years ahead of her time."

Such lacunae, though, need to be accepted, for Great British Cycling is not the history of British cycling, from James Moore to Chris Froome, but rather Ellis Bacon's pick of a few dozen people whose roles in travelling from Parc St Cloud to the Champs-Élysées deserve to be recognised. Rather than attempting to show the whole picture, what Bacon does in Great British Cycling is to pick a few pieces from the jigsaw puzzle and look at them in detail. And what Bacon does particularly well is to pick some pieces that others tend to overlook, such as the examples above, or telling the stories of the Dave Rayner Fund and the Braveheart Fund, two grass-roots funders of cycling in the UK, reaching parts that the Lottery money just can't.

As well as being a somewhat episodic look at the history of British cycling Great British Cycling is a curiously personal history, with Bacon inserting himself into the story, as a fan, as a would-be Olympian, as a journalist. As a rule, I quite like this kind of writing, but the frequency with which British cycling writers have turning to it is becoming a pain in the posterior. If you pick up a book promising to tell the history of GB cycling, do you really need to read about the author's time trial experiences, or what posters he had on his bedroom wall as a kid? Done as a complete personal history - such as by Tim Hilton in One More Kilometre And We're In The Showers - it can work, you get the story of both the sport and the person. But in a book that sells itself as being about the history of the sport, it just seems out of place. And when you consider all the milestones Bacon has necessarily had to overlook - all the Hales and Robinsons etc who can't even be name-checked - it just seems wasteful, a distraction from the bigger story.

There being at this stage rather a lot of literature about the history of British cycling - I've done the list before - where does Great British Cycling fit? Well, while covering even familiar ground - James Moore, Brian Robinson etc - Bacon does try to add something, with new interviews wherever possible (even with something as ancient as James Moore, that is actually possible: Moore's grandson, for instance, tells some of the story of the man who first set the wheel spinning for British cycling). What Bacon doesn't offer, though, is any real criticism of any of those involved in the story. Tony Doyle, for instance, even finds himself rehabilitated in Bacon's telling of his role in the history of British cycling. And I can't recall reading any criticism of the direction British cycling is currently being pushed. For the most part, Bacon is offering a pat on the back to all involved, perhaps taking the view that the current successes - two Grand Tours, a World Championship, and more Olympic bangles and baubles than you can shake a stick at - justify everything else. The fact, though, that Bacon is looking at less well celebrated aspects of British cycling history is what really differentiates Great British Cycling from much of the rest of the recent crop of similar books and is justification enough for reading it.