One Less Car, by Zack Furness

Share All sharing options for: One Less Car, by Zack Furness 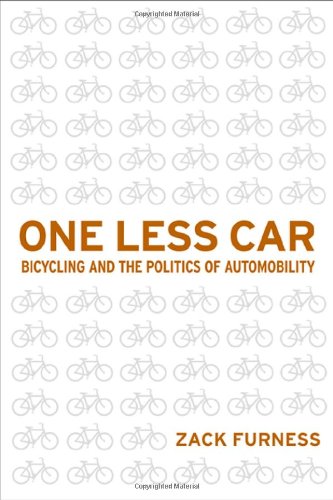 Title: One Less Car - Bicycling And The Politics Of Automobility
Author: Zack Furness
Publisher: Temple University Press
Year: 2010
Pages: 348
Order: Temple University Press
What it is: What it means historically, culturally, socioeconomically, and politically to be a bicycle transportation advocate/activist in the US
Strengths: The broader social and historical tidbits detailed by Furness make One Less Car worth reading regardless of where you stand on cycling advocacy
Weaknesses: US-centric

In Peddling the Bicycle and the Development of Mass Marketing Ross Petty argued that the bicycle "was the first expensive, durable, luxury item marketed in the United States." Through the 1890s bicycle manufacturers in the US were spending between $4 and $9 million per year on marketing, with retailers adding another $1 million. This wasn't just down to the arrival of a new product - the safety cycle - and trying to inform the public about it (the market itself exploded, from 150,000 cyclists in 1890 to four million by 1896). This was also about the competition among the many manufacturers, each needing to differentiate their product. Petty cites the case of Monarch Bicycles, who in 1893 sold 1,300 bikes on a limited marketing budget. The next year, $20,000 was spent on marketing and sales rose to 5,000. Then $75,000 was spent and sales rose to 20,000. $125,000 spent in 1896 saw the company sell 50,000 bikes. From Madison Square Garden to Madison Avenue, it would seem that cycling was there at the start of it all.

This bicycle revolution of the 1890s also saw the advent of the production line, something normally attributed to Henry Ford. Glenn Norcliffe's Popeism and Fordism: Examining the Roots of Mass Production finds continuities between the production processes of Albert Pope's bicycle factories and Ford's automobile plants. And, of course, there is the role played by the bicycle industry - through the League of American Wheelmen (LAW), the governing body it created - in lobbying for new roads and traffic legislation (laws which impacted harshly on those who rode horses). The humble bicycle, the signifier of all things simple and pure, may even have played a role in the birth of suburbia, a point made by Sylvester Baxter in Economic and Social Influences of the Bicycle, early cyclists using their new mode of transport as a way of escaping the masses.

For Zack Furness, all this hidden history suggests that far from creating a culture of automobility out of nothing, the motor industry took such a culture from the cycling industry and merely built upon it. And, along the way, did to the bicycle what the bicycle did to the horse. So how did we get from then to now, from a position in which cyclists gave way to the car but are now trying to drive those cars off the roads?

"As automobility became exclusively refined and repackaged around the car, the cyclists who played a crucial role in constructing this multifaceted system were either eager to get behind the wheel or eager to get out of its way. Small groups of bicyclists in Europe, Canada, and the United States eventually grew weary of this reductive binary in the 1960s and 1970s, choosing instead to position the bicycle as the centrepiece of an emerging critique of the automobile and car culture. This eclectic assortment of environmentalists, political activists, cyclist enthusiasts, urban planners, and utilitarian commuters appropriated the bicycle as a symbol of resistance and a tool for thinking through the prospects of non-motorized transportation and pedal-powered mobility. These vélorutionaries do not subscribe to a singular vision of the role bicycling can or should play in society, but what they share is a collective disposition that sees bicycle transportation as part of a substantive, even radical vision of cultural and political transformation."

While some bicycle activists demand unreasonable outcomes - a Planet of the Bikes approach in which cars are wiped from the earth - Furness uses One Less Car to argue for a more modest goal: "using bicycles and other pedal-powered technologies as part of a strategy to eliminate all of the very short trips (one mile or less), most of the short trips (75 per cent reduction of trips between one and two miles), and half of the longer ones (two to five miles) currently made by car."

Such modest goals make Furness's One Less Car more intelligent than the average 'boo-ya! to cars, hurrah! to bicycles affair' normally served up by pro-cycling lobbyists. Furness is even one of the few activists I have read who bothers to critique the cycling industry and dare question just how green bicycles are, or how much respect the industry has for labour regulations:

"bicycle advocates and professional cycling organizations that profess an honest interest in creating a healthier, more sustainable world through bicycle transportation must begin to offer more substantive explanations for how those objectives square with the realities of a globalized bicycle industry in which ownership is concentrated into a corporate oligopoly and the overall commitment to workers' rights and environmental regulations is at best sketchy."

One of the more interesting aspects of Furness's approach to making his argument is the manner in which he makes his case, laying out the history of the bicycle and highlighting some of the ways the bicycle fell out of favour (in the US). Consider, as a for instance, this one concerning the representation of cyclists in US media:

"Representations of utilitarian cycling are now all but absent from mass media in the United States, and it is particularly rare for television and film audiences to see an adult character using a bicycle as a normal, everyday mode of transportation. In the few cases where adult bicyclists are featured in US entertainment media, they are generally portrayed as being far outside the mainstream; most are depicted as childish men, eccentrics, sexually odd characters, geeks, and/or financial failures. Negative perceptions of cycling are one of the many reasons why bicycles are widely considered a 'forgotten mode' of transportation in the United States."

Furness suggests that America's most famous (silver screen) cyclist is Pee-wee Herman (Pee-wee's Big Adventure is Tim Burton's take on The Bicycle Thief). He notes Frank Oz's In and Out (in which a teacher is 'outed' by one of his former pupils) and the Steve Carrell vehicle The 40 Year Old Virgin as two of the few mainstream American movies with central characters who ride bikes. And then, of course, there's Quicksilver, the Kevin Bacon film in which a high-flying stock broker falls so far he has to become a cycle courier. Other films noted include I Heart Huckabees and You, Me and Dupree, as well as the comedy series Arrested Development. In all of them, Furness argues, cycling is used as a representation of oddness.

"The virtual absence of female cyclists in these and other films and TV programs illustrates the extent to which the anxiety over mobility is very much an anxiety about heterosexual masculinity itself. Without a car, it is presumed that men on bicycles are incapable of adequately performing their masculinity for other women, or each other, thereby running the risking of becoming toy-collecting eccentrics, thirty-year-old paperboys, or forty-year-old virgins."

Or, perhaps, consider the auto-erotic outlines of Schwinns, bikes that aped the sleek lines of automobiles. The cycling industry itself, it would seem, bought the line that bikes were for children and cars were for adults:

"For one to become an adult in the techno-spatial context of suburbia means that one naturally has to become a driver, so bicycling essentially serves as a youthful preview of adult mobility - a set of training wheels for one's real experiences as a driver. This theme is rehearsed not only in the bicycle advertisements and entertainment media of the 1950s and 1960s but also in the design of the bicycle itself. Manufacturers like Elgin, Shelby, and Mercury were among the companies to pioneer lavish art deco-style bicycles in the 1930s, largely mirroring the sleek lines, large frames, chrome highlights, and whitewall balloon tires found on automobiles of the same period. Yet it was Schwinn and Murray who propelled auto-detailed bicycles to an iconic status in 1950s American culture as kids traversed the suburban landscape on their candy coloured cruiser bicycles that for all intents and purposes served as mobile signifiers of the automobile itself - visual icons forecasting an eventual, and inevitable, transition to adult automobility."

The use of such historical and social arguments to explain how we got to where we are today make - for me - One Less Car a very rewarding read, Furness showing that the cycling industry in the US sowed the seeds of its own demise and suggesting (perhaps) that, rather than gathering once a month to reclaim the streets, more effort needs to me made to reclaim the media. The basic argument in favour of the bicycle, and for a reduction in the use of motor cars - the large gains to be made from small reductions in car use - does, to my mind, make sense, and is made reasonably. Whether you buy the argument being made - and just because you ride a bike that does not mean you automatically buy all pro-cycling arguments - or not, One Less Car is worth reading, especially for the story of how cyclists in the US got to where they are today.