Life inside and outside the women's peloton.

Share All sharing options for: The Road Less Taken, by Kathryn Bertine 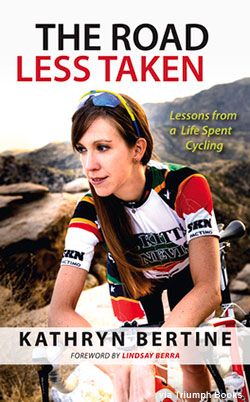 Title: The Road Less Taken - Lessons From A Life Spent Cycling
Author: Kathryn Bertine (with a foreword by Lindsay Berra)
Publisher: Triumph Books
Year: 2014
Pages: 234
Order: Triumph
What it is: A collection of essays and articles about Kathryn Bertine's attempts to make it in the pro peloton, and to the London Olympics
Strengths: Bertine can be quite funny, and has some important things to say about the state of women's cycling today
Weaknesses: Me, I could do without the life lessons being pointed out

In 2006 Kathryn Bertine - a thirty-something triathlete who had graduated from figure skating and rowing - was writing part-time for ESPN (somewhere along the road of a career in sports she'd earned an MFA in creative writing) when she was given the perfect assignment: write about being an Olympian by becoming one. Having tried a couple of sports Bertine settled on cycling as being the one most likely to get her to Beijing. In the end it didn't, a story that's told in As Good As Gold (ESPN Books, 2010). Which book followed Bertine's earlier skating memoir, All The Sundays Yet To Come (Little Brown, 2003). With Beijing behind her, Bertine was supposed to hang up her bike and get back to real life. Only she chose not to. She chose to keep on pedalling, and this time to see if maybe she couldn't pedal into the professional ranks. And, maybe, this time make it all the way to the five ring circus due to set up its big top in London in 2012:

"I knew exactly what I was up against, physically and emotionally. Roads less taken are terrific in many regards but hardly synonymous with continuity or ease. I learned that struggle most often arrives under two circumstances: when we can't see our path, or when we choose to stray from the one we're truly meant to follow. No path is clear the whole time; there is rarely smooth pavement along the road less traveled. That would be a given. This new goal of cycling toward the pro ranks would bring victory and devastation, difficulty and enlightenment, and yet another detour from the predictions of a life most traveled."

While The Road Less Taken has a lot to say about cycling - especially the women's side of the sport - Bertine would argue that it isn't really a book specifically for cyclists. It's a book for anyone taking on a new challenge. File under Self Improvement, not Sport. What this means is that the various stories often come with little life lessons, sort of like the final 45 seconds of your typical Modern Family episode. Consider as a for instance the following story related by Bertine. The set up involves her being in Belgium for a block of training and heading out one day to do some intervals when she comes across a snelheidsmeter, a speed-sensor that flashes a smiley face if you're under the limit and a frown if you're over. So Bertine set about turning that smile upside down:

"Old snelly and I battled it out for frown control. While the road was flat, the robust Belgian headwind kept the challenge lively-39 kph, 42 kph, then, on my final sprint...63 kph! Snelly finally frowns, I finally smile! Wow, 63 kph? I'd really improved. Only I hadn't...a Fiat sped by, and likely triggered the frown while I sprinted. I frown, snelly smiles. Do over. I lost track of the intervals, going above and beyond the necessary number my coach prescribed. I made it all the way up to 48 kph on my last attempt in the wind but couldn't quite convert the mood of the happy speed meter. My mood, however, altered tremendously-a great reminder of the power of perspective and the joy of breaking routines and how to go about finding a little inspiration in unexpected places. Sometimes trying to frown is a step in the right direction."

I will be honest and say that, perhaps, The Road Less Taken is a little bit too saccharine for my tastes - such tastes frequently involving me switching off Modern Family before the moral of the story is hammered home - but, at the same time, it's the sort of thing I can learn to live with. And the fact is I actually enjoyed The Road Less Taken. I smiled reading it. Maybe even laughed once or twice. Bertine knows enough to see the ridiculousness around her. I value that. (Writing about some proposal for women boxers to wear skits, Bertine says this: "Personally, it throws me off when I see a woman running in a skirt. My reaction is to wonder who's chasing her. Someone with a weapon? Maybe a briefcase? Still, these skirts are a choice, not a rule.")

For the non-cycling audience, the life lessons are the key thrust of the book, but for cyclists Bertine has a lot to say about the state of the distaff side of our sport:

"As I've raced internationally for St. Kitts and Nevis during the past four years, I've competed in a lot of remote places and seen a lot of eye-opening behaviors. I've witnessed course-cutting cheaters, sketchy race directors, touchy-feely creepy coaches, commissaries with a penchant for posting rather creative race results, and routes laden with precarious pot-holes and uncovered sewer openings. The sport has its obstacles, but the one obstacle we must overcome is speaking out on issues of fairness and growth for women's cycling."

Speaking out on those issues is not something Bertine shies away from. Included in The Road Less Taken are a number of articles that have previously appeared in VeloNews and on ESPN, including a story about Brazil that - in light of the recent spate of positives reported there - still seems relevant. In it Bertine talks about the Brazilian coach Antonio Silvestre who, in 2012, dared to note that doping was commonplace in cycling. Worse, he'd questioned the cleanliness of Brazil's best and brightest:

"I speak as the coach of the Brazilian federation, about athletes that live a fantastic period, racing for their clubs, and when they come to the selection to race outside the country, their results diminish. Why? Because they quit training? No, much to the contrary. When they go to the selection, they train 15, 20 days. They train more, and when they come to international events, they drop [back or out]. Therefore, what do you say? Why? One word: it is doping."

Unsurprisingly, Silvestre quickly lost his job. (Perhaps here it is worth noting that the biggest thing in South America that seems to have grabbed attention in Aigle recently has not been the spate of doping positives but rather the issue of whether one particular team's kit was "unacceptable by any standard of decency.")

Perhaps most pertinently, Bertine also has quite a bit to say getting race organisers to put on events for women alongside events for men (Bertine is one of the founding members of Le Tour Entier, whose lobbying encourage the Tour de France organisers to add a criterium for women - La Course - on the last day of the grand boucle). In one essay Bertine talks of Nicole Wangsgard - who, as well as being a rather good sprinter on the US circuit is also a professor at Southern Utah University - who turned down an offer to become involved with the Tour of Utah because of the lack of a race for women:

"Here I was, about to go tell all these kids and teachers about the joys of cycling and how fantastic the Tour of Utah is, but when they ask when I'm racing, I'll have to tell them I can't. It just didn't sit well with me, having to tell young children that women aren't allowed in the race. It's great that 150 of the best pro men come through town, but it simultaneously sends the message that women are not allowed to do this event."

The Tour adding La Course to its itinerary was important in terms of profile for women's racing, but the Tour organisers were actually playing catch-up with other race organisers, in particular AEG in the US, whose Tour of California has included an invite-only women's time trial for several years now:

"Long touted as the 'biggest dog' of U.S. stage races in terms of media coverage, the Amgen Tour draws both praise and backlash over the inclusion of its women's time trial. Some feel the women's event is a good start to narrowing the equality gap, while others argue that the one-day, invite-only competition is merely a band-aid solution to giving the women their due."

AEG VP of communications Michael Roth suggested to Bertine that one way forward (in the US) would be for the other major men's races - Utah and Colorado - to also add one-day women's races, with the three of them then being packaged for TV:

"If Colorado and Utah also hosted a televised time trial for pro women, it could be a series people tune in to watch...almost like American Idol. If Tour of Utah and USA Pro Challenge could meet our commitment, then we've got something to take to sponsors and TV stations. Then what if we got Redlands, Cascade, Gila to commit to one-day TV coverage for a women's race, too? Then we've got a platform."

Hopefully that's not where La Course and the newly announced race at the Vuelta will also head, a sort of XX Factor.