How To Be A Cyclist, by John Deering and Phil Ashley

Share All sharing options for: How To Be A Cyclist, by John Deering and Phil Ashley

Title: How To Be A Cyclist - An A-Z Of Life On Two Wheels
Authors: John Deering and Phil Ashley
Publisher: Arena Sports
Year: 2014
Pages: 220
Order: Birlinn
What it is: A guide to the important things in cycling, like how to ride in a group and what are the rare occasions when you're allowed to drink coffee that isn't black
Strengths: A pleasant balance of wit and wisdom, served up with some high production values and gorgeous photography
Weaknesses: It's laddish - women want to know how to be cyclists too 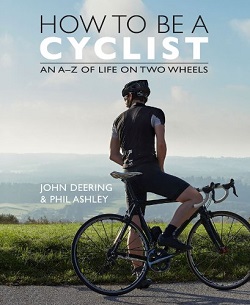 The English, they love their A to Z. What other nation on earth could reduce something as elegant, something as beautiful, as a map to an A to Z? And then they make it ubiquitous, the Gideon bible of books, the one book you can count on most all of your friends owning. Having done that, everything else has been repackaged alphabetically. In How To Be A Cyclist we get John Deering and Phil Ashley - last seen bantering away in Twelve Months In The Saddle - turning cycling into an A to Z, twenty-six important lessons in cycling.

Some people think that all there is to being a cyclist is not falling off, and that's something even an adult who's never been on a bike can learn in about an hour. But, of course, we know there's a lot more to it than that. You may be able to teach yourself not to fall off, but who's going to teach you all the really important things in a cyclist's life, like coffee, socks and cycling lore?

Pause. Coffee? Socks? Cycling lore? This is The Rules all over again, only with laddish banter, right? Yes and no. The Velominati, their rules are curated by The Keepers of the Cog, Deering and Ashley, they present their guide as a dialogue between (appropriately) the Guide (Deering) and an aspiring cyclist, referred to as the Pilgrim (you have to think John Wayne and not Garth Ennis). Picture Kwai Chang Caine and Master Po, if you will. Or if that's too old for you, try Yoda and Luke, only without the muppetry. The big difference between the Keepers of the Cog and the Guide and the Pilgrim is that the Velominati tend to act like they're too cool for school, while Deering and Ashley are more like freshly minted teachers (they still believe in the power of education). Or, more pithily, even when they're saying the same things (HTFU), where the Velominati offer diktats, How To Be A Cyclist serves up dictums.

But who actually needs this stuff? Never turning your bike upside down, even when fixing a puncture, that's the sort of advice you pick up the first time you're out with a club and someone flats - why would you need a book to tell you something like that? Herein lies the problem - in our atomised society, no one rides with a club anymore:

I'm not so sure. I still see a long line of kids without coats on queuing for Dusk in Guildford on Sunday nights. I think that's the one where Cheryl Cole belted the lady in the toilets, but they've changed the name now.

Of course, sorry. And it might not have been that one anyway, there's two or three.

Look at me. I'm ignoring you. In the old days, you had to be in a cycling club. You just had to. You had to be in one if you wanted to race, effectively. OK, there were ways around it, but the whole thing was secretive and mysterious. That was because racing on the road was illegal in the UK for most of the bicycle's existence, and even when it was legalised, the participants found it best to sneak around in black jackets and give the courses codenames. The E72, for goodness sake. It's already got a codename: the A12. How many codenames does a road need?

It's different now though?

Very much so. [...] You see, the clubs were fantastic places to learn how to ride a bike. I'm not talking about when your dad takes your stabilisers off, I'm talking about the stuff you need to know to ride properly. How to sit right. How to pedal nicely. How to go around corners. How to stay out of the wind. How to ride in a bunch.

Down in Australia, the authorities are actually having to deal with this as it's causing problems. Here's Scott McGrory of Cycling Victoria, talking to ABC recently:

"It's dangerous - the crashes that are happening and the crashes we've been seeing, the increased number, have been because of the less skilful cyclists that are new to the sport. [...] We've had this boom in recreational cycling, and then the need has come with the fact that there's the extra riders out there that haven't actually come through the traditional method of cycling clubs to learn bunch etiquette, safety and all the dos and don'ts you should be doing on the road to keep yourself safe and the riders you're with safe."

Cycling Victoria want to introduce safety and etiquette training. How To Be A Cyclist offers just that, or the theory side of just that anyway. It's not the book you may want to read but the chances are you know someone who should read it (that said, even though you're a master-level know it all, How To Be A Cyclist is a fun read). Consider it a training manual for MAMILs. Or LILs - Lads In Lycra (they must exist, mustn't they, what with Halfords flogging all those Pinarellos?). Lads? Because like Twelve Months In The Saddle before it, How To Be A Cyclist is a little bit laddish. But in the nice sort of way, not the scary Dapper Laughs way. Irreverent. Opinionated. On trend. Just a little bit sweary.

But. It is for the men in MAMILs (and the lads in LILs):

Pilgrim, do you know what a MAMIL is?

Yes, it's a middle-aged man in Lycra.

That's right, a middle-aged man in Lycra. Ladies aren't sad and deluded enough to think of spending the equivalent of a mid-size South American republic's GDP on carbon fibre, Assos and Castelli will make them better people. Women riding bikes just aren't as tragic as you. They go bike riding cause it's fun. But for you, Pilgrim - a devotee, an acolyte - it's so much more, isn't it?

This is the reality of the way cycling is sold today. If women want to learn the tricks of the trade, they're expected to read something like Cathy Bussey's The Girl's Guide To Life On Two Wheels or one of the other cycling guides that comes with a picture of a woman riding a bike on its cover. (And this is no new trend: it's been happening since the bike was young and taller than its rider: look at Lady Cycling.) And so How To Be A Cyclist is aimed squarely at men. Women who have an opinion on when it is permissible to drink coffee that isn't black, why you should never - ever - mismatch front and rear tyres and whether there is such a thing as a good ride that doesn't involve climbing, well they can still read How To Be A Cyclist. But they might feel just a little bit excluded (as will any man reading The Girl's Guide To Life On Two Wheels).

So what's covered in How To Be A Cyclist? Let's quickly run through the alphabet: A is for attitude ("HTFU"); B is for bike ("never sacrifice style for speed"); C is for café ("life is too short to drink shit coffee"); D is for drugs ("if it's available from the bar, it's allowed"); E is for etiquette ("don't be that guy"); F is for fit ("the cheap bike that fits you will always beat the expensive one that doesn't"); G is for gears ("you don't have to prove what a big man you are, but no triples"); H is for hills ("there are no great flat bike rides"); I is for Italiano ("some people have just got it, some people are absolutely full of it"); J is for job ("stick to what you know and leave the rest to us"); K is for kit ("there's no such thing as enough kit"); L is for legs ("don't be ashamed, be ashaved"); M is for mileage ("there's no such thing as enough mileage"); N is for no ("if you have to ask, you know the answer"); O is for objectives ("be the best you can be"); P is for peloton ("it's not all about you"); Q is for quackery ("only if the pros do it"); R is for racing ("the single malt of bike riding"); S is for socks ("if you can't get these right, give up"); T is for technology ("they're handlebars, not computerbars"); U is for unlucky ("when an unstoppable force meets an immovable object"); V is for vulcanised ("you can't have a nice bike with shit wheels"); W is for winter ("an opportunity to wear all of that nice stuff you bought"); X is for existentialism ("yes, it's stupid, life is stupid, ride your bike"); Y is for yarns ("you can't beat a good story"); and Z is for Zeitgeist ("it's meant to be fun").

What that listing doesn't do is demonstrate the practicality of the advice offered in How To Be A Cyclist. So take something like energy gels. These, the reader is told, are for carrying in the bottom of your jersey pocket and should never, ever be used until you really, really have to (sort of like the way hill walkers always have a manky bar of Kendal Mint Cake in the bottom of their rucksack - it's comfort food, you feel comfortable knowing it's there). Not only will advice like that save you from gut rot, you'll also save a fortune in over-priced energy gels.

And not all the advice is about being too cool to care. Some of it is about teaching people to be nice. Consider the case of the casual wave - the millimetre nod of the head, the flick of even one finger off your handlebars - good cyclists know to offer to other road users:

Should I say hello to everybody?

As a rule, yes. I suppose there must be a tipping point, a critical mass where it is no longer practical. I mean, if you had a car in Edwardian times, you'd probably have waved at other drivers. You'd look a bit of a cock trying to greet everybody coming the other way on the M6 these days. If you're riding to work, say, on one of Boris's blue superhighways, there is unlikely to be much time to converse with your fellow wage monkeys. If, however, you are trundling around the lanes at the weekend and you see a like-minded fellow passing the other way, it still feels grossly impolite to the Guide if you don't acknowledge each other's presence in some way.

As with Twelve Months In The Saddle, How To Be A Cyclist is only partly about the words and a good half of the book is taken up with Phil Ashley's photos, which nicely illustrate the text but also remind the reader of why they should be a cyclist.