The fifth volume of the cycling magazine-cum-book 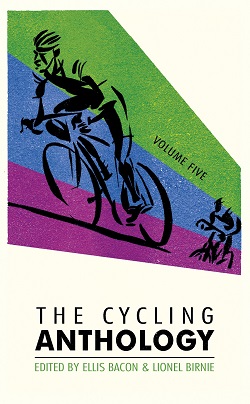 Before getting into this fifth volume of the Ellis Bacon and Lionel Birnie edited cycling magazine-cum-book, something I said when last reviewing this series needs revisiting. Back then I noted that out of fifty-three articles from twenty-seven writers across the first four volumes the editors had found only one woman capable of joining a few words together. This issue was taken up recently on Twitter, where it was pointed out by Birnie that "in two years two women have pitched a piece to us and we've published one", that for the first volume "a woman journalist we asked politely declined" and that, really, the gender imbalance was down to a lack of female writers covering the sport and pitching the editors. A case of them not seeking out the opportunity open to them, and not a case of no one seeking them out.

This fifth volume then is, like three of the previous four, an all male affair with the articles coming from editors Bacon and Birnie as well as Matt Beaudin, Daniel Friebe, Brendan Gallagher, Andy McGrath, Matt McGeehan, Edward Pickering, François Thomazeau, and Jeremy Whittle.

So what are the stand-out stories in this volume, the ones that justify the cover price? There's Jeremy Whittle on panache. There's François Thomazeau on the mondialisation of the Tour. There's Edward Pickering on Superbagnères. And there's Daniel Friebe on Jean-François Naquet-Radiguet.

"In France, Laurent Fignon was the last of the latter-day saints of panache, a rider so concerned about his image that he lost the 1989 Tour de France because he wore his hair in a ponytail. There hasn't been a French rider with such panache - that cocktail of arrogance, insularity and rage - since Fignon."

If panache could be described simply as a cocktail of arrogance, insularity and rage, life would be easy, both for the riders who get told they lack panache (particularly recent Tour winners Bradley Wiggins and Chris Froome) as well as for the fans and the media who do that telling. But panache doesn't seem to offer itself to any definition ("It is, it seems, very much in the eye of the beholder"). Ultimately, Jeremy Whittle comes down to the fact that panache isn't just about how you are on the bike, it's about who you are off it too. So even if Hugo Koblet, Jacques Anquetil, and Luis Ocaña all had pharmacy bills as big as Alexander Vinokourov's, they - through their actions off the bike - are still the quintessence of panache while Vino (like most of the children of Gen-EPO) will only ever be "a rider [who] specialised in 'faux' panache."

Whittle accuses Vino of having killed panache. Others have accused Vino's ilk of worse:

"Former Tour de France director Jean-Marie Leblanc, who sent an open letter to denounce the dangers of EPO in 1996, once confessed to me that in his mind the arrival of Eastern riders into the peloton had marked the beginning of the end of cycling as he knew and loved it."

So notes veteran French journalist François Thomazeau when looking back at his time on the Tour and how the race has changed over the last three decades. The internationalisation that has happened at the Tour, part of it was planned, part of it just happened. The westward push - the arrival of the Americans - that was what got Félix Lévitan fired in 1987, that dream of a globalised sport he pursued for so long and at such a high cost. But the push east - the arrival of riders from the former Soviet states - that was largely an accident, one that began before the fall of the Wall and the rusting away of the Iron Curtain but reached terminal velocity once all restrictions were removed.

As well as witnessing the rise of riders from the former Soviet states and hearing the lingua franca of the Tour change from French to English, Thomazeau's Tour career has seen the media's interactions with riders change - through the advent of team buses and the protective cocoon they offer riders - without really changing at all:

"My baptism of fire was an ominous one. Rushing out of the press room after watching the last kilometres of the stage [to Superbagnères in the 1986 Tour] on television, I found myself face to face with Bernard Hinault, the yellow jersey on his back, trying to get away from the media as he had just gambled and lost to LeMond on a dramatic stage in Superbagnères. I did what I still do on the finish line: I ran behind the man shouting his name. He looked back in anger and pushed me out of the way as I was reaching him."

Three years later the Tour returned to Superbagnères. But in the quarter century since 1989 the big buckle has shunned that summit where Hinault crumbled and LeMond rose victorious. Which, for Edward Pickering, only adds to the allure of a mountain that has seen Jacques Anquetil, Tom Simpson, Eddy Merckx, Jean-René Bernaudeau, Bernard Hinault and Greg LeMond all climb it in yellow:

"Superbagnères is unsullied by the EPO years - you can run your finger down the list of stage winners there and not speculate about the viscosity of their blood, nor wonder about who the first clean rider was. While some out of Imerio Massignan. Federico Bahamontes, José-Manuel Fuente, Bernard Hinault, Greg LeMond and Robert Millar may or may not have played according to the rules and ethics of their time, none need an asterisk by their name."

The Pyrenean ski-resort's début at the Tour (in 1961) saw Jacques Goddet denounce the riders as dwarves of the road ("awful dwarves, impotent, resigned and satisfied with their own mediocrity") but the summit finish was back the following year, and for another four times after that, each of which Pickering looks at (including the Tour's shortest road stage (19 kilometres in 1971) and the 1979 Tour's brutal opening in the Pyrénées). Since 1989, though, the mayors of Bagnères-de-Luchon - above which Superbagnères rises - have preferred to spend their money getting the Tour to finish in the town itself (as they did this year, where Mick Rogers took the victory salute) and so the mountain itself has been shunned and only the memories remain.

The Tour's last visit to Superbagnères coincided with the the ending of a very tumultuous period in the history of the Tour's organisers (back then the Société du Tour de France, ASO not arriving on the scene until 1992). Between 1903 and 1987 just three men had run the Tour (Henri Desgrange, Jacques Goddet and Félix Lévitan). Across eighteen months in 1987 and 1988 another three men were given the chance to to impose their will on the race, and the first of these - Jean-François Naquet-Radiguet - is the subject of Daniel Friebe's contribution to this volume of The Cycling Anthology.

While Naquet-Radiguet's exact contribution to the Tour is often disputed - his tenure barely lasted a year, hardly time to get his feet under his desk - few deny that it was he who helped usher the Tour into the modern era, professionalise what up to them had been something of an aged and amateur operation. Jean-Pierre Courcol (briefly) and Jean-Marie Leblanc (more lastingly) picked up the baton plucked from Naquet-Radiguet's hands (with the baton now being carried by Leblanc's successor Christian Prudhomme) but if you look hard enough his fingerprints can still be seen on it.

"Naquet-Radiguet's laconic self-assessment is that he merely 'went into a stuffy environment and opened the windows and doors.' More impartial judges maintain that he dragged the Tour kicking and screaming towards the twenty-first century."

The main, lasting legacy Naquet-Radiguet left the Tour is the village départ, where all the cool riders used to hang out, drinking coffee, reading newspapers and watching the girls go by before the start of a day's labour. The other legacy was his role in Laurent Fignon losing the 1989 Tour. And that alone might just be reason enough for you to read volume five of The Cycling Anthology.