Top tips on what it takes to go faster.

Share All sharing options for: Faster, by Michael Hutchinson 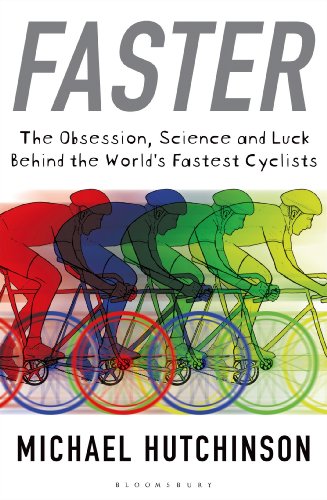 Title: Faster - The Obsession, Science and Luck Behind the World's Fastest Cyclists
Author: Michael Hutchinson
Publisher: Bloomsbury
Year: 2014
Pages: 220
Order: Bloomsbury
What it is: An autobiographical self-help manual of sorts for cyclists who want to go faster.
Strengths: Spoonfuls of anecdotal sugar help the science bits go down
Weaknesses: Hutchinson does tend to come across as a bit of a whiney "Why wasn't I an Olympian" moaner

The difficulty lies not in the new ideas, but in escaping from the old ones.
~ John Maynard Keynes

Somewhere toward the end of Michael Hutchinson's Faster, the man with more British (and Irish) time trial records than he can count says this:

"The idea of natural talent has taken a bit of a hammering in the last few years, in sport most notably from Matthew Syed in the book Bounce. The pleasingly simple essence of Syed's book is that it's all about practice. He buys into the suggestions of Malcolm Gladwell in Outliers that 10,000 hours of practice is a key factor in success in any field. Most probably that comes as ten years of 1,000 hours a year. That's what it takes to reach the top, and normally what looks like 'natural talent' can be explained by the fact that those who apparently have it also did a lot more practising as well."

Practice is important to Hutchinson. Very, very, very important. It is, you could say, most of what Faster is about. For, reduced to its essence, Faster is another self-help training manual for helpless cyclists. Now Faster isn't quite being sold as a training manual but - since it is one man's account of his own quest for speed told partly through anecdotes from other people in search of the same thing - well anyone reading it is likely to mine Faster for lessons they can apply to their own efforts at going faster. So whether or not written as a self-help manual, that's just the way it'll be used.

Basically, Faster rounds up various fashions and fads in cycling - looking at the roles played by things like nutrition, physiology, psychology, technology and genetics - and dumbs each down to a single chapter, with a few of those chapters containing the thoughts and actions of a few people involved with British Cycling or Team Sky on the relevant topic (so we get Steve Peters on monkeys, or Chris Boardman on squirrels, that sort of thing).

Nutrition is, perhaps, the most faddish of the various go-fast ideas in cycling. Every other year the world seems to get tilted on its axis and you get sold the new new thinking on how to fuel your engine. The volume of different fuel types seems to go up and down with hem lines, while the mix just never seems to settle: one day you're being told to eat more carbs, the next it'll be all about protein. And then there's stuff like extract of beetroot juice, or whatever the vegetable of the month is down in your local Innocent juice bar. It all comes, it all goes, and it's all supposed to make you go faster.

Of course, compared to technology, food is easy. And - even if you're loading up on super-sized tubs of supplements - it's (usually) cheaper than most of the technology advantages you can buy. Hutchinson calls technological tricks designed to make you go faster free speed, in that they're stuff that would allow even a club-footed camel with a weight problem to go faster without pedalling harder. That they will potentially bankrupt you - and, if the UCI's promised technology free-for-all goes ahead, the whole sport too - well that's just the price you have to pay: there's no such thing as a free lunch. The various technologies considered here by Hutchinson encompass pretty much everything from go-faster clothing (skin suits with exposed seams to deflect air better in a wind tunnel but which may not work quite that way in the real world) to all the parts of the bike that can be made make you save seconds and gain watts (again, in wind tunnels). All come with eloquent promises of the gains you'll make. But do you ever really get what you're promised?

"Not long ago, I sat down and added up all the free speed I reckoned I'd gained over the last ten years or so. I had to guess some bits here and there, but overall I felt I had a decent grasp on the big leaps forwards. I have made four major position changes during that time, for example, and all of them were based on reasonably solid evidence. Skinsuits I've tested in the tunnel and on the road. Helmets, ditto, bikes, ditto, wheels, ditto. I didn't make any wild assumptions about how much I might have gained from one or two things I'd never really tested properly. I was realistic, perhaps even a little pessimistic. It was a nice, sober, exercise to while away a quiet winter evening.

"The problem was that when I added it all up, I should have gained about ten minutes over a 40km time trial. In reality I've probably gained more like two, maybe two and a half, and that's after I've made allowance for the fact I don't have as much raw grunt as I did ten years ago. Something over seven minutes has escaped."

The problem? "Everything interacts with everything else." Those new go-faster wheels you bought - what effect do they have on your go-faster forks, will they still go as fast or will your new wheels actually slow them down? Much of this lesson, I thought, the nerds had learned after Lance Armstrong's abandoned F1 project, when the Texan told his kit sponsors to work together to find, for instance, a pair of sunglasses that can actually be worn with an aero helmet. But, even from anecdotes Hutchinson relates from Boardman's squirrelling, it seems not to have been the case. Either than or every couple of seasons cycling has to relearn the same lessons.

If you can get over things like Hutchinson praising Syed's sub-Malcolm Gladwell witherings (and relegating David Epstein's The Sports Gene to a footnote, even though Eptsein pretty much rips the 10,000 hours meme a new one and has a pretty clear response to Hutchinson's fears of genetic determinism) Faster is a handy round up of current thinking on the different parts of the go-fast equation. Hutchinson may not provide any answers but he does raise some interesting questions.