A rich repository of Tour lore.

Share All sharing options for: 100 Tours, 100 Tales, by Suze Clemitson 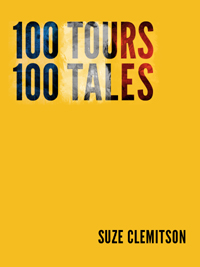 Not many grande boucle books open by suggesting that the hirsute appearance of early Tour riders was anything more than just a personal grooming preference. But Suze Clemitson's 100 Tours, 100 Tales does just that, hinting that - for some - the decision to sport a 'tache might have been as much to do with a desire to tickle a woman's fancy. As in, literally tickle. This is that kind of book, one which sees the Tour the way most fans do: something to be admired, something to be respected and - sometimes - something to poke fun at and laugh and joke about.

Clemitson may be better known to some by her Twitter handle, @FestinaGirl, and 100 Tours, 100 Tales was originally meant to be a self-published e-book - elements of it originally appeared in blog form - but it was then taken up by the folks at Velocast. In her introduction to the book Clemitson makes clear what the book is, and is not:

"This is not a history of the Tour de France. At least not in the conventional sense. It's a collection of tales - many apocryphal or taken from hyperbolic newspaper accounts - that together give a picture of what remains the greatest free sporting spectacle in the world. It's entirely personal, somewhat opinionated and, ultimately, a love letter to the riders that have filled my summers for the last 28 years with joy, despair and frustration as they weave their kitschy, dazzling way around the roads of France."

The personal nature of this quixotic history of the Tour also stretches to the author's own appearances in the story. I have elsewhere been critical in the past of journalists placing themselves front and centre of the story - it has seemed to be a particularly common occurrence in the past twelve months, with far too many stories about the Tour really being about the journalists writing them - but the whole point of 100 Tours is that is a fan's notes. As a taster, here's Clemitson at the last stage of 2003 Tour, a time trial Jan Ullrich needed to be faster than Lance Armstrong in:

"And then the riders arrive and we forget the rain, the discomfort, the way the clothes are sticking to our skin as if we stepped into a power shower fully clad. You never get a buzz like seeing the Tour come to town - the diffused glare of the motards headlights, the expectant roar of the crowd. But I've never been on a roadside with such a sense of expectation, where what might happen mattered quite as much as during that time trial. David Millar powered through, clearly on an exceptional ride even in those conditions. But it was the ‘match' we were waiting for - the straight fight between Armstrong and Ullrich - a duel to be played out in properly apocalyptic conditions, on slick roads, through roaring crowds.

"I remember the way Ullrich's Bianchi jersey glowed in the murk, the way every muscle was tensed and straining with the effort. Was he making time on Armstrong? About a minute later we had our answer. A great roar went up on the road ahead - half excited, half shocked - I ran to the nearest group of men (always men) clustered round a radio. What happened? Chute! A crash - Ullrich, it's Ullrich, Ullrich has crashed!

"I didn't wait to see the last rider on the road. I turned my back on him. 5 years after I'd sat with my American friend in a little town sweltering under the canicule I had no desire to see the Yellow Jersey. I denied my mum the opportunity to yell ‘dopeur' at Lance Armstrong one last time. We moved back to England the following year and our roadside adventures at the Tour de France were over."

The personal aspect of the book is what differentiates 100 Tours, 100 Tales from the many other books that repeat Tour legend and lore but at its heart it is still the myths of the Tour that are its strongest selling point. In this regard one of the problems with a lot of Tour books is that they have a tendency to mine and refine the same raw material: Pierre Chany borrows from someone and becomes a source for Les Woodland who then becomes a source for Geoffrey Wheatcroft who then becomes a source for someone else, and all the while the story gets more and more twisted and turned in the retellings. But something Italo Calvino wrote in one of the stories in Invisible Cities is true of the Tour: "everything previously said of Aglaura imprisons your words and obliges you to repeat rather than say." Almost everyone who attempts to write about the Tour is, in some way, imprisoned by what has been written before.

Here, though, is where 100 Tours, 100 Tales is better than the average Tour book: it draws from a wide variety of sources - creates for itself a more expansive prison cell - and considers characters and incidents that are often overlooked elsewhere in the hurly-burly of trying to squeeze so many races into such little space. Consider, if you will, Alphonse Baugé.

Few today know Baugé's name but he is the most successful directeur sportif in the Tour's history, having bossed the winners of all the Tours between 1909 and 1922 (from François Faber through the years of La Sportive and Odile Lambert - better even than Cyrille Guimard's record or that claimed by Johan Bruyneel). In 1907, while still earning his DS spurs with the under-funded Labor squad, Baugé wrote daily dispatches from the Tour to his boss, which L'Auto later collected in book form, Lettres à mon Directeur. This book has become a source for some stories told by Clemitson.

An advocate of Choppy Warburton's training techniques - Baugé published a book on the subject - his letters speak of life behind the scenes in the Tour, making it a valuable resource for stories not of champions, but of the other men of the Tour. Here he is in Grenoble, the fifth stage of the 1907 Tour (which Tour Lucien Petit-Breton would go on  to win), talking about his Labor riders:

"The trips out without me hardly make me happy. Left to their own devices, and with this heat, I imagine citronnade, quarts of stout and halves of lager disappearing down their throats. And after the secret of Choppy: you must take nothing between meals. It's hard work, I admit, but it is vital.

"I gave my great ‘lion' [François] Faber a lesson in tactics, recommending that he stick to Petit-Breton's wheel like a leech. I also didn't forget to advise him to deliver the killer blow as hard as he could, if the latter should lose contact. It's not very likely, but you never know."

The real charm of 100 Tales is that it is in thrall to the overblown beauty, majesty and romance of the Tour. Take this passage about Luis Ocaña (soon to be the subject of a new biography by Alasdair Fotheringham):

"The Tour de France is given to pseudo religious imagery, but never was it more appropriate than when describing Ocana. He had the face of an icon, the sad dark eyes of an El Greco Christ. He was exiled from his homeland, his father cast out by Franco. His career was too brief, marred by physical fragility between the glimpses of brilliance. He suffered with lung and heart problems. He tested positive towards the end of his career. He retired to his vineyard. Like so many ex-riders before him business ventures failed. Then came the depression. Then came the cancer. Then came the bullet.

"Luis Ocana shot himself in the head at the age of 49 after a lifetime of hardships and success, of ill health and bad luck, of the achieved and that which remained ultimately, tantalisingly, unachieved.

"But in the 1973 Tour the heavens laid before him a cloth of gold as he ascended towards his longed for consecration."

Charming as the book is, there is no getting away from one major flaw: it is riddled with typos, which come early and often. All books contain typos and I in particular am in no position to complain about them, given the frequency with which they occur in these Bookshelf pieces but, even so, here they do catch the eye. This does seem to be a particularly common complaint with self-published books, where the author has no editor giving the finished product the once over. As an e-published book, it's to be hoped that these can be rectified in future editions.

That quibble aside, 100 Tours, 100 Tales is a rich repository of Tour lore and well worth reading by anyone with an interest in the big buckle.