From last to first - a history of the lanterne rouge.

Share All sharing options for: Lanterne Rouge, by Max Leonard 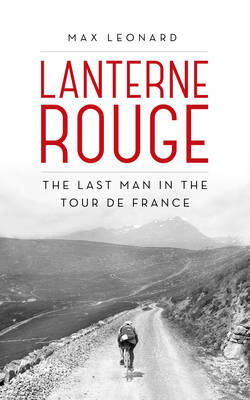 Title: Lanterne Rouge - The Last Man In The Tour De France
Author: Max Leonard
Publisher: Yellow Jersey Press
Year: 2014
Pages: 264
Order: Random House
What it is: A history of the Tour de France's lanterne rouge
Strengths: Leonard doesn't try to tell the story of every rider who finished last but instead focuses on a few key episodes - backed up by exhaustive research and original interviews - and in so doing captures the conflicting emotions the lanterne rouge engenders in riders and among fans
Weaknesses: My favourite lanterne rouge, Edwig van Hooydonck, doesn't feature large enough

On the morning of Saturday July 5th this year, the 198 riders in the 101st Tour de France will line up outside the 19th century Town Hall in the city of Leeds, England. Of those 198 riders, perhaps one each from six, maybe seven of the twenty-two teams will have genuine hopes of winning the final maillot jaune. For three, maybe four other teams, the focus will be on winning the maillot vert. All twenty-two teams will be aiming to come away from the race with at least one stage win. A couple or three teams may have the ambition of winning the maillot á poids rouges. Maybe one, maybe two will focus on winning the team prize. The maillot blanc will be the ambition of a handful of riders. Nobody taking the start that Saturday - not one of those 198 riders - will be aiming to win the lanterne rouge.

Officially, the subject of Max Leonard's Lanterne Rouge - the last man home in the Tour de France - does not exist as far as the people at the Amaury Sport Organisation (ASO, the Tour's organisers) are concerned. The official Guide Historique produced annually by Jacques Augendre stopped listing the lanterne rouge after 2009. But for fans of the sport - and journalists in search of quirky copy - the lanterne rouge will always exist, its winner will always be honoured. We fans know that there is no dishonour in finishing last for we know that the lanterne rouge is really the last rider who did not fall along the way, not the rider who finished last. As such he represents for us all those who did not make it back to Paris.

We are a romantic bunch, we cycling fans, even those of us dismissed by some as cynics. And for us the lanterne rouge is the last great romance of the Tour. It is an honour that has never been corrupted by marketing, brought to you in association with this, that or some other title sponsor (the French cycling federation actually forbids the awarding of prizes for coming last, not as a means of protecting the honour of the lanterne rouge but because of other concerns). There is no over-priced replica lanterne rouge jersey for you to buy from Rapha. It is something that the fans of the sport have always had more ownership over than have the race organisers or the media or the replica kit resellers. It is ours.

It is ours and yet when you really think about it we know so very little about the lanternes rouges down through the one hundred editions of the Tour. One of the problems in telling stories about the Tour's lanternes rouges is that, often, very little is known about those riders, particularly the further back you go in time. Because they are at the back of the race they are rarely mentioned in dispatches. In the early Tours you can't even be sure of tracing their stories through the daily results printed in L'Auto, for the last man home may have arrived well after the paper went to press. Take the tale of the first to finish last:

"I was pretty sure that Millochau had been born in Champseru, near Chartres in north-western France, in 1867, but couldn't be quite sure of his name: many sources had it as 'Millocheau' with an 'e'. Old Arsène was a shadowy figure, almost coquettish in his reluctance to let himself be known, and I had been drawn into the chase. I'd been sending out fruitless enquiries in Internet forums, and missives via obscure genealogy sites, but the bibliothèque was the place where I hoped a few scrappy facts might be saved from the waster-paper basket of history. As the old L'Auto's unspooled in front of me so too did the first Tour, as if happening for the first time. And Arsène's role gradually came into focus. Unfortunately for him that role predominantly involved bringing up the rear."

Despite the fact that Millochau was barely noticed by L'Auto in the first Tour Leonard eventually discovered more about the first lanterne rouge - a great-grand-nephew providing some information and a French journalist unearthing a 1947 Miroir Sprint article that added more colour (and even a couple of photos) - and can claim to have given fresh life to a rider long since forgotten by most Tour historians.

When the lanterne rouge first came to be celebrated is unclear. It was only in 1908 that the Tour officially began to recognise all who finished as being géants de la route (another phrase of unclear parentage, most crediting it to a book Victor Breyer and Robert Coquelle published in 1899 although I have recently seen it in use before then). Some credit the coinage to Albert Londres, in one of his articles from the 1924 Tour (in his report published in Le Petit Parisien on July 13 he wrote: "Voici la lanterne rouge. C'est le nom que l'on donne au dernier. C'est Rho, dit toujours d'Annunzio. Il est difficile de dire si Rho est plus maigre qu'obstiné.") but I have seen it in use in La Pédale the year before that so, as with many things said about Londres, that's clearly bunkum. Leonard goes better than 1923 and finds reference to the lanterne rouge in a 1919 issue of L'Auto (somewhat poetically the same year as the maillot jaune was officially inaugurated: the first and the last being lauded in one Tour). That being the first Tour after the Great War it seems not unlikely that it was in use earlier than that. When, though, well that is not known.

By the 1920s the Tour was receiving widespread coverage beyond the sporting press and journalists in search of fresh angles were looking beyond the race for first place and turned their attentions to the also-rans, including those bringing up the rear. In the 1930s, the lanterne rouge took another step forward when the race was reorganised into national and regional teams and new rules came into force: certainly the gulf between the performance of the first and last rider diminished and you could really believe the two were actually in the same race (whereas in the days of the isolés and touristes routiers it did seem sometimes that the lanterne rouge was just riding to finish). But where the lanterne rouge really came into its own was in the years after the Second World War when the critérium circuit exploded - and being last in the Tour was deemed worthy of a guest spot on that circuit - and agents like Daniel Dousset and (later) Roger Piel began to have a major influence on the sport and the stories told about it.

Having found in his search for the history of the lanterne rouge the story of a forgotten rider (Millochau) Leonard goes on to find a fresh angle on a well-worn tale from these post-War Tours: that of Abdel-Kader Zaaf (lanterne rouge in 1951), he of the infamous snooze under a tree in 1950:

"I'd come to Abdel-Kader Zaaf sceptical about the wine incident and hoping to dig into the political situation, to write about discrimination against the backdrop of the impending anti-colonial war, the brutality of which ravaged Algeria and would almost bring France to her knees. And, while that's all true, it's impossible to keep this jack in that box. Zaaf was a complex figure, both popular and likeable and mercenary and untrustworthy, and far cleverer than the usual tale gives him credit for. The French have a wonderful phrase for an unruly bunch of riders: un panier de crabes - a basket of crabs - which seems to me to perfectly describe the volatility, bad temper and self-interest of a ten-man breakaway, say, ten kilometres from the finish, in which everyone is fighting their own battle to win and be damned with the rest. Zaaf was a basket of crabs, all by himself."

After Zaaf, Leonard's tales of lanternes rouges turn to riders better able to tell him themselves what it meant to finish last, and how and why they achieved that feat. Here Leonard talks to riders like Tony Hoar (lanterne rouge in 1955), Aad van den Hoek (1976), Gerhard Schönbacher (1979 and 1980), Jacky Durand (1999), Jimmy Casper (2001 and 2004), the Flores brothers Igor and Iker (winners in 2002 and 2005, the only brothers to have won the lanterne rouge) and Wim Vansevenant (2006, 2007 and 2008, the only three-time lanterne rouge). Their stories free that of the lanterne rouge from the myth and mysticism of hyperbolic journalism and try and explain the reality of finishing last in the Tour de France. Their stories capture the complexity of the lanterne rouge and are the true heart of Leonard's tale, stripping away the romance we like to attach to the Tour's last man home and finding the real tale underneath.

I should, in the spirit of full disclosure, probably note here that, in the acknowledgements section Leonard credits an article I wrote for this site - Raise High The Red Lantern, Cyclists - in which, among other things, I compared the average speeds of the various tail-end Charlies between 1903 and 2010. But as with Suze Clemitson's 100 Tours, 100 Tails (in the review of which I neglected to mention that one chapter utilised some research I had done on the Tour and World War One, which I later provided to Clemitson) I really don't see this as being important: it doesn't impact on my opinion of the book one way or the other and nor should it impact on yours.

And my view is that this is a delightful book about a wonderful subject, one that - while it is an annual staple of Tour coverage - has heretofore received less attention than it merits. As an annual staple of Tour coverage you might like to think you already know a fair bit about this subject but Leonard's Lanterne Rouge finds much that is new and presents a fresh angle on familiar stories. And, perhaps most importantly, I think it captures why we as fans care about an award that the Tour's organisers seem ever more determined to try and forget about.