Share All sharing options for: 27 Stages, by Kimberly Menozzi 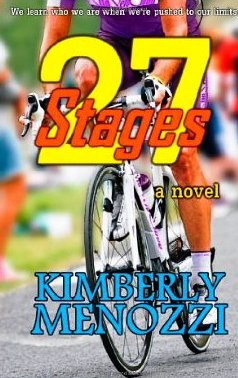 Meet Federico 'Ciccio' Renard, 'The Face of the Tour', according to Grand Tours Magazine, the Tour being the Tour d'Europa, 27 stages of racing over 31 days, taking the riders from Portugal through Spain and into France by way of Andorra, thence into Italy, Switzerland, Germany, the Netherlands, Luxembourg and finally back into France for a finish in Paris on the Champs-Élysées:

"My nickname is 'Ciccio.' In some regions of Italy, it's a term of endearment, which also means 'chubby.' I hate it. Always have; always will. And that's precisely why Jerzy used it rather than 'Chicco' - a proper nickname for 'Federico.' Subtle differences mean a lot. "

"I'd been his domestique for three years, sacrificing my own strength and potential stage wins so that he, as team leader, could take the points, the titles - and often the entire competition. It was my job and I had done it without complaint, as Rom now did for me, because I knew my time would come.

"Brunn had been in a major car accident in the off-season nearly four years ago, along with Jerzy and two other riders, one of whom died, the other rendered paraplegic. Both of Jerzy's legs had been broken. With a fractured pelvis, a cervical fracture and considerable damage to his knee, Brunn's initial diagnosis was that he'd never ride again. Then it was revised to say he'd never compete again. Then that changed to 'He'll never ride a Grand Tour'.

"Yet here we were, about to ride the biggest Grand Tour of all, the Tour d'Europa, and Brunn was our likely team leader. Again. Instead of me."

Brunn has been out of the sport since his career-ending carcrash but is now hot on the comeback trail:

"Don't get me wrong. Brunn is an incredible athlete - his showing in the Giro d'Italia was proof enough of that. Placing sixth after nearly four years away is outstanding for anyone - never mind that he'd recovered so quickly from his injuries.

"The manic publicity after Brunn joined the team again was nothing short of incredible. It was fitting and he deserved it, but that didn't erase the fact that I'd been short-changed. Until Brunn's decision to return to the sport, until he'd rejoined us, I had been Jerzy's focus. I'd been performing beyond my wildest dreams, riding extremely well, taking prizes and stages almost at will.

"And now, it meant nothing."

Meet Renard's fickle fiancée, Solange, a former podium girl with an interesting approach to adding spice to a relationship, fanning the flames of desire with ungentle indifference and ignoring her husband-to-be's phonecalls as he sets out on the greatest challenge of his life.

Meet Abigail White, a mid-life crisis made real, looking to kickstart the career in cycling photojournalism that stalled when she got married:

"I'd contacted a few sport magazines with a proposal for a photo journal called The Tour d'Europa, Day by Day. After a while I'd received a response from one saying they'd liked my portfolio and were interested. An added bonus: they'd agreed to reimburse me for equipment costs, as well.

"My dream of selling my photographs was coming true."

Meet Charles White, cold-hearted husband to Abigail and also suffering a mid-life crisis. While his body is with his wife trailing behind a bike race, his mind and libido are otherwise preoccupied.

From the first moment Renard and Abigail meet, fireworks are exploding, each seeing something in the other that becomes more and more of an obsession as the Tour d'Europa progresses and Ciccio rides in and out of the leader's jersey. Will Abigail find the courage to leave her husband? Will Renard reconcile with his fiancée? Or will he fall for the older woman hiding behind a camera lens?

Kimberly Menozzi's 27 Stages is, then, a cycling romance, a boy-meets-women (Abby is a decade older than the foxy Renard, who has certain Spartacus-like qualities when it comes to hottitude) story of love lost and found. As in any love story, the path of true love is not easy and the reader is left guessing right until the end whether this is just another May-to-September romance that will have run its course once the bike race is done.

27 Stages is also the story of a bike race, an ersatz Tour de France in which Renard must overcome his team-mate Brunn if he is to stand on the top step of the podium on the Champs Élysées wearing Royal, the Tour d'Europa's maillot jaune. For Renard-Brunn here think Contador-Armstrong - the young ingénue caught in the shadow of the veteran champion - more so than the bitter LeMond-Hinault rivalry, though with fewer and more fleeting references to the D-word.

The cycling action is a well described melodrama that - more often than not - rings if not true then certainly what you imagine the truth to be (with the major exception - obviously - of Renard battling for the win and the woman's heart at the same time). And you have the added find of imagining who certain riders might be based on (Team Maxxout's Jurgen Schlessinger, for instance, descends with all the grace and confidence of one of the Schlecks and is the only rider likely to challenge Brunn or Renard for the final victory).

Fitting somewhere between The Yellow Jersey and Cat - better written than the former and with a bigger cycling plot than the latter - 27 Stages offers an engaging read that captures some of the essence of our sport alongside it's love story. It may not be your cup of tea - it is a lyrca-and-love story - but it could be just be the type of book that helps explain the sport for others.