The Monuments, by Peter Cossins

One book, five races, hundreds of stories: Peter Cossins tells the stories of the five races known today as the Monuments.

Share All sharing options for: The Monuments, by Peter Cossins 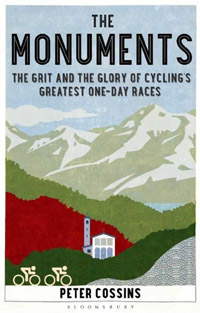 Title: The Monuments - The Grit and the Glory of Cycling's Greatest One-Day Races
Author: Peter Cossins
Publisher: Bloomsbury
Pages: 410
Year: 2014
Order: Bloomsbury
What it is: A history of the five Monuments
Strengths: A solid account of the origins of each of the five races, along with the major changes they have undergone down through the years
Weaknesses: The organisation of the book - each race's story told one at a time - does make for a degree of repetition when it comes to talking about riders

The five Monuments are the cream of the Classics, the five one-day races that should be on the Bucket List of every rider alive: Milan-Sanremo, the Ronde van Vlaanderen, Paris-Roubaix, Liège-Bastogne-Liège and Il Lombardia (and it is Il Lombardia: if you want to deny RCS the right to change the race's name from the Giro di Lombardia then let's have no half measures, let's demand they go back to the race's original name, Milan-Milan). How those five races that are today classed as the Monuments came into being is the story told in Peter Cossins's The Monuments - The Grit and the Glory of Cycling's Greatest One-Day Races.

Let's start with the last first: why Paris-Roubaix and not Bordeaux-Paris (for as we all know the original Paris-Roubaix was created with Bordeaux-Paris in mind and scheduled as a tune-up event for riders building their season toward the Derby of the Road)? Back before the opening m in the Monuments became capitalised, some considered Bordeaux-Paris to be part of that clan, a monument (before it became part of the UCI's official lexicon the word was bandied about with gay abandon and was as little understood as the word classic). But Bordeaux-Paris was a race out of time and, year by year, modernity overtook those who started out at silly o'clock of a Sunday night/Monday morning and raced in the slipstream of fat men on those funny little motorbikes. And so too did the race that was born in its shadow: Paris-Roubaix found a way to embrace its anachronistic nature, Bordeaux-Paris didn't.

Why Liège-Bastogne-Liège and not the Flèche Wallonne? That's a more complex question. If you turn the clock back before the Second World War you will find a cycling calendar that was poorly organised. This was something people complained about from time to time, that races came and races went and it was sometimes difficult to judge from year to year what were the real 'appointment' races. Post-War the owners of the most powerful sports papers in France, Italy and Belgium - L'Équipe in France, La Gazzetta dello Sport in Italy and Het Nieuwsblad-Sportwereld and Les Sports in Belgium - decided to collaborate in order to make their races more powerful by creating the first international season-long competition within the sport, the Challenge Desgrange-Colombo, named after Henri Desgrange and Émile Colombo, Fathers respectively of the Tour de France and the Giro d'Italia. This was a cartel of race organisers, teams told that if they wanted to ride this race they would also have to ride that.

The initial races included in the Challenge Desgrange-Colombo were Milan-Sanremo (La Gazzetta - 29/3/1948), Paris-Roubaix (L'Équipe - 4/4/1948), Paris-Brussels (L'Équipe - 11/4/1948), the Ronde van Vlaanderen (Het Nieuwsblad - 18/4/1948), the Flèche Wallonne (Les Sports - 21/4/1948), Paris-Tours (L'Équipe - 25/4/1948), the Giro d'Italia (La Gazzetta - 15/5/1948 to 6/6/1948), the Tour de France (L'Équipe - 30/6/1948 to 25/7/1948), and the Giro di Lombardia (La Gazzetta - 24/10/1948). As you can see, there was no space (initially) for Liège-Bastogne-Liège. That race didn't fall into Les Sports' possession until 1951. But, by that time, the Flèche Wallonne, though only created in 1936, had overtaken the race called La Doyenne (because of its advanced age, the first edition having taken place in 1892, though it wasn't until its revival in 1908 that Liège-Bastogne-Liège began to become an established fixture on the cycling calendar). Once the Challenge Desgrange-Colombo was launched the organisers of Liège-Bastogne-Liège - Pesant Club Liégois - seemed to realise pretty quickly which way the wind was blowing and immediately brought in Les Sports to help with the organisation (and, by extension, the promotion) of their race. Which Les Sports did by closely linking it to their own Flèche Wallonne in the Ardennes Weekend once they had brought it into the Challenge Desgrange-Colombo in 1951.

That first Ardennes Weekend shows that, from the off, the people at Les Sports seemed to prefer Liège-Bastogne-Liège over their own Flèche Wallonne, La Doyenne getting the Sunday slot in the Ardennes Weekend while the upstart Flèche Wallonne was fought out on the Saturday. And when the Challenge Desgrange-Colombo disappeared (the cartel of organising sports papers broke down after 1958) it was the Fléche Wallonne which suffered in the calendar by earning a weekday slot, at first after La Doyenne and then - from 1965 onwards - leading the old lady out.

We look at these five races and we want to believe that they are the best of the best, the oldest and the most beautiful five races on the calendar. That they have always been the oldest and the most beautiful races on the calendar. That, though, doesn't explain why Milan-Turin - the oldest classic - suffers a stuttering existence and an identity crisis, or why the arguably more beautiful Giro dell'Emilia can never extricate itself from the shadow of Il Lombardia. Nor does it explain why Paris-Tours - which used to be the sprinters' classic, before Milan-Sanremo took that tag - is left out in the cold, not a Monument, not even included in the heirs of the Challenge Desgrange-Colombo - the Pro Tour and today's WorldTour - since 2008.

The Monuments are, in reality, just a part of modern cycling's marketing myth, a way to elevate one group of races over others, maintain the power of the race organisers ASO, RCS Sports and Flanders Classics and crush the life or spirit out of rival races.

Four of them do help give shape to the cycling calendar, the Spring Classics season opening with Milan-Sanremo and closing with Liège-Bastogne-Liège, five weeks packed full of one-day races of varying age and status and a confusing array of combinations from the Cobbled Classics to the Ardennes ones (with, confusingly, the Omloop Het Nieuwsblad and Kuurne-Brussels-Kuurne served up weeks in advance of the season as appetizers). The Autumn Classics season, on the other hand, is left as an utter mess, Il Lombardia its sole Monument and it now throwing in its lot with the World Championships even as the UCI tries to extend cycling's global footprint with recently crafted Classics, the Grands Prix Montréal and Quebec, as they once did with the Japan Cup.

Nevertheless, we forgive these races. Yes, for everything. We pardon them for, in short, being themselves. For there is no doubting but that the five Monuments can match and even out do the limelight-hogging Tour de France with tales of daring do and chicanery and deserve more space on the bookshelves than they currently get (in the English language, anyway). The Ronde van Vlaanderen, it even has its own versions of Henri Desgrange and Géo Lefèvre, in the forms of Karel Steyaert - better known by his penname, Karel van Wijnendaele - and Leon van den Haute, the one lost in the shadow of the other and the other (Steyaert/Van Wijnendaele) a larger-than-life figure who was easily the equal of Desgrange in the way he tried to impose his own will on the sport.

When you look at the stories of the individual races, you have Eugène Christophe and the snow-blighted 1910 edition of Milan-Sanremo. You have Marc Madiot winning Paris-Roubaix as a junior (1979), a senior (1985 and 1991) and as a manager (1997). You have Freddy Maertens towing Roger de Vlaeminck around the Ronde van Vlaanderen in 1977. You have a group of half a dozen riders entering the tunnel into the Rocourt stadium at the end of the 1970 edition of Liège-Bastogne-Liège and one man emerging alone. What happened in that lightless passage those six men know but aren't telling. Whatever it was, though, was crucial in Roger de Vlaeminck being the man to emerge alone and his rival Eddy Merckx left looking for vengeance. And you have many stories from the race that used to be the Giro di Lombardia in which it wasn't just a win in the last major race of the season that was at stake as the leaves left the trees, but also victory in either the Challenge Desgrange-Colombo or its successor, the Super Prestige Pernod Trophy. You have five races packed full of characters and stories about them.

All of these stories - and more - are to be found in The Monuments, Cossins taking each race separately and leading the reader through its history, telling how the race came about and showing how it has evolved over time. Each race's story clips along at a fair pace, jumping between the men who made the race's famous and the elements of each race's parcours that have come to define each race, with a good balance between the two elements. Whatever you think you know about these races, The Monuments is a book you're going to want to read and a book that should be on every cyclist's bookshelf.