French Revolutions author Tim Moore pops into the Café for a chat about his new book, Gironimo!, for which he rode the route of the 1914 Giro d'Italia.

Podium Café: This was your third Grand Tour, counting the adventure you told in Continental Drifter:  is an ancient Rolls Royce easier to keep on the road than your antique Hirondelle?

Tim Moore: The Roller was a bit of a crock, and had a terrifyingly vast engine which would have looked more at home behind the propeller of a Spitfire. I figured this guaranteed all sorts of hilarious encounters with gloating continental mechanics, but in the event it didn't break down even once.

The Hirondelle, on the other hand, had about seven moving parts - most of which bent or broke before I'd even set off for Italy. On my first full day out there, the saddle completely snapped in two. Honestly, you'd have thought that bike was 100 years old or something. 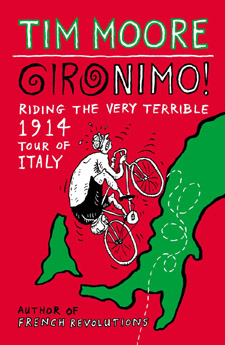 PdC: When you did French Revolutions you barely knew how to fix a puncture. I was shocked in the early pages of Gironimo! by how much you've changed - you know what a cotter pin is (I don't - and don't want to) and can wax lyrical on the relative merits of bottom bracket types. What the hell happened to corrupt you so?

TM: I probably just got older and more boring. Plus I did a crash-course on Sheldon Brown's encyclopaedic online bike-fixing archive, and sought the input of people who knew what they were talking about.

I'd like to boast that I'm now one of those people, but a couple of months ago I took the Hirondelle to Bath in the boot of my car for a literary festival, and when I got there the bloke who was chairing the event had to come out and put it back together for me.

PdC: A lot of the story you tell in Gironimo! is about laughing at your pratfalls and the pitfalls of riding a bike with wooden rims and wine corks for brakes, but you did actually enjoy yourself, didn't you? The cycling was actually fun, in between all the not fun - but actually quite funny - bits?

TM: Of course! As Dr Johnson meant to say: If a man is tired of cycling through the rural Italian summer, he needs a terminal shoeing.

Even awful days - getting soaked/sideswiped/lost/a rusty saddle bolt up my jacksie - always seemed like tremendous adventures when I relived them in the evening, with the map across the restaurant table and a half-empty bottle next to it.

At the same time I had to be on permanent guard against the ‘holiday tendency' - the temptation to pootle about sightseeing with an ice-cream wedged between my bidons. 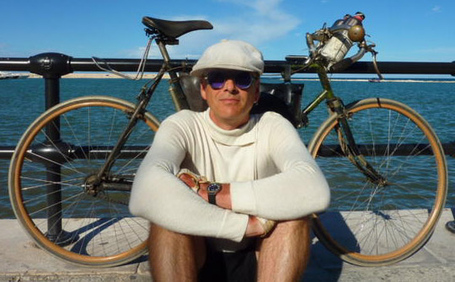 PdC: For Rouleur-reading Raphanistas, your woollen jersey and blue goggles are the height of hipster fashion - how did they go down in the ultra-fashionable fleshpots of über-chic Italy?

TM: I don't want to shatter too many illusions, but the typical uniform of small-town Italy is a synthetic T-shirt with ‘Super Sexy Jeans Box' printed across the front in Comic Sans.

Old men outside cafés sometimes understood what my outfit was about (if I had a euro for every time I was hailed with a frail cry of ‘Fausto Coppi!', I would have four euros). Young women would gather their children close to their skirts until the weirdo had gone away.

PdC: Linking in another of your earlier books, cycling's eroica phase is similar to the retromania you explored in I Believe in Yesterday. This eroica thing, how much of that do you think is a fashion thing and how much is that a lifestyle choice among its adherents?

TM: I think there's a bit of an ongoing reaction against the whole all-the-gear-no-idea MAMIL phenomenon. Plus a possibly related backlash against hi-tech, low-sweat Generation Armstrong - a desire to return to a simpler, nobler, harder age of cycling.

At the same time we can't deny that the burgeoning eroica phenomenon is at least partly fuelled by straightforward retro-hipster bell-endery.

I definitely felt some sort of inner zeitgeist guiding me towards the idea of an old-school challenge, both physical and mechanical. Every man of my dad's generation and before knew how to fix old stuff - these days people just buy new stuff. Cyclists used to be the masters of make-do-and-mend, but now they're worse than anyone. By finding some ancient old crock and getting it back on the road, I pretty much singlehandedly brought down the Age of Consumerism.

PdC: All your books tend to be described as comedy/travel, but at the heart of all of them is you exploring history, you telling people about the past. Is the history of these things the primary hook for you, your route in to the tasks you take on? Or is it something you only find out about along the way?

TM: Without wanting to get too academic about it, history is the study of actual stuff that actual people actually did. How can anyone not be interested in that?

The last book I did was a tour of all the worst places in Britain - a relentlessly dismal task were it not for their back-stories. Great Yarmouth in November seems much more fun when you've just read about the Victorian clown who was pulled down the Yare estuary in a barrel pulled by harnessed geese, inciting such commotion that 79 spectators fell off a bridge and drowned (on reflection perhaps ‘fun' was the wrong word).

Sometimes history draws me into a project - this new book, the living-history one of course, and the following-eccentric-dead-people pair. Sometimes history is a bonus discovery along the way: I didn't really know anything about cycling's past before setting off to ride the Tour de France route. And sometimes there just isn't much history at all, which may explain why my Eurovision book was such a thunderous failure. Nul Points by name and nature!

PdC: Alfonso Calzolari, he's a forgotten Giro winner, even among people who think they know their Giro history. You had Paolo Facchinetti's book as your guide both to his life and your Giro and I think it's clear from Gironimo! that you have a lot of respect for him, and enjoy telling people about what he did, as much as what you did?

TM: I think 1914 is just a bit too long ago now. Calzolari lived into his 90s, but when he died his story died with him. It's an honour to have done my bit to resurrect it: his is a stirring and truly transcendental tale of what an ordinary man can achieve through raw, long-suffering determination alone. Well, that and strychnine.

It just seemed so perfect that the most appalling race in history was won by a journeyman who'd only come first once before in his pro career, and never did so again. Pretty much the ideal sporting role-model for an unfit middle-aged man.

For purposes of competitive comparison I programmed his finishing time into my satnav. That was a mistake: he beat me back to Milan by just over 52 hours.

PdC: And Freddy Grubb - I know next to nothing is known about him, he's one of the forgotten pioneers of British cycling, even if his career on the continent only lasted eleven hours. Were you surprised when you found out there had been a Brit in that Giro?

TM: I knew the name - it was painted on a lot of road-bike frames until the 1970s - but I didn't know the man. And what a man he was! FH Grubb, double silver medallist at the 1912 Olympics, a teetotaller who rode in the colours of the Vegetarian Cycling Club, and the first Brit ever to tackle the Giro. If only briefly, as you say.

As a time-triallist he'd never ridden in a peloton, and failed to master the etiquette so impressively that rivals were soon queuing up to bully him off the road. ‘The continentals would stick their inflator in your spokes as soon as look at you,' he chuntered when he got home. He couldn't face another pro race, which meant that having sacrificed his amateur status he never rode competitively again. It would be another 54 years before another British rider felt up to riding the Giro.

PdC: Alberto Masi being impressed by the challenge you set yourself - even if you didn't fully realise who Masi was at the time, was that the biggest thrill about the whole trip, having someone so steeped in Italian cycling complimenting you on what you had just done?

TM: To be fair Signor Masi himself was more interested in the Hirondelle than what I'd done on it - he spent the entire time measuring the frame with his calipers. It was his assistant who expressed genuine astonishment at my ride: he genuinely could not believe I'd ridden the thing all round Italy. His faltering words of awe-struck admiration weren't just the biggest thrill of the trip - this was the high point of my entire life. (Sorry, kids.)

PdC: You've done the Tour de France and you've done the Giro d'Italia. You've done Spain on a donkey, so maybe you wouldn't want to take on riding a Vuelta a España route.  But do you think you could be tempted to ride again, maybe riding routes of one day races Britons have won, like Bordeaux-Paris, Milan-Sanremo or the Ronde van Vlaanderen?

TM: I'm not sure I could properly immerse myself in a quest to ride one-dayers, even a lot of them. As the only GT absent from my cv, the Vuelta seems the obvious choice. Too obvious? YOU decide. (No idea why I said that, because unless you're my editor you don't.)

You can find reviews of French Revolutions and Gironimo! on the Café Bookshelf.

Our thanks to Tim Moore for taking the time to participate in this interview.