Reading the Race, by Jamie Smith, with Chris Horner

Share All sharing options for: Reading the Race, by Jamie Smith, with Chris Horner 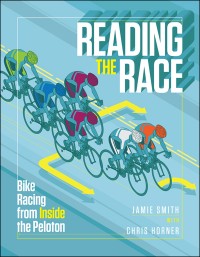 Title: Reading the Race - Bike Racing from Inside the Peloton
Authors: Jamie Smith, with Chris Horner
Publisher: VeloPress
Year: 2013
Pages: 268
Order: VeloPress
What it is: A tricks-of-the-trade training manual for those who want to know how cycling works
Strengths: Smith's writing is relaxed and humorous while Horner's anecdotes add colour
Weaknesses: It's aimed very much at the US racing scene, and so may not translate easily onto other roads

Science and technology win bike races. Fausto Coppi revolutionised the science side of the sport, with new ideas of training and nutrition. The Gitane-Renault teams were to the fore in introducing new technology, lightweight materials and aerodynamic frames. Jamie Smith - an American bike race announcer and author of Roadie - argues that:

"in the scientific rush forward, much of the nuance of bike racing has been lost. The subtleties of pack riding, bike handling and butt kicking have been usurped by wattage, functional threshold power, and kilojules."

Reading the Race is his response to this loss, a sort of back to basics 'How To' manual that talks tactics and techniques rather than training tricks (although, in truth, it does deal rather a lot with training tricks too).

While Smith and Horner talk about the European pro scene, Reading the Race is aimed at America's legion of weekend warriors:

"Though different form European racing and American professional racing, American amateur racing is still awesome. It's one of the coolest, most challenging recreational pursuits in the country."

As a rule, me and manuals don't get on. Blame my techie friends, who laugh at the idea of anyone actually reading a manual. You can figure out how something works by pressing buttons and things. And you can figure out how bike riding works by doing things. That, unfortunately, involves a lot of falling off and being shelled out the back. Both are character building but the first has the possibility of breaking bones and the second tends to break your spirit. Of course, you can also figure out how bike riding works by asking questions, but cyclists can be funny about questions and give the wrong answers. All of which, I guess, explains all the how-to training manuals in the world.

Now given my lack of experience with cycling manuals - I know I read one when I first took up the sport and I think I skimmed another a couple of years ago, but that's about it - I can't compare Reading the Race with anything else on the market. So I'll just tell you what's in it and let you decide for yourself.

The chapters in Reading the Race are structured as follows:

The titles themselves are pretty self explanatory and take you through some of the basics - like cornering or looking over your shoulder, both of which we'll come back to in a moment - through crafting strategies; reacting to common scenarios; making deals and combines; breaks, echelons and blocking; pack protocol; pissing on the move; and sharing the prize money.

Much of the book strikes me as being common sense, but oftentimes common sense can be the most uncommon thing. Take, as a for instance, how to corner, of which Smith tells us:

"If you lean over too far while pedaling, you will plant the pedal into the pavement, and the bike will buck like a bronco. You may get lucky and simply scrape your pedal on the pavement, which makes a distinctive sound that'll be followed by some sort of vocal reaction by those around you. Or you may get tossed to the ground."

Obvious stuff, says you, but tell that to the guy who decked it pedalling through the last corner of a major race. Or consider this anecdote from Horner about the simple art of looking over your shoulder:

"One year, when I was racing at the Fitchburg Longsjo Classic in Massachusetts, my old teammate Henk Vogels was just ahead of the field as we were coming down one of the fastest and roughest descents in domestic bike racing. I was on the front of the field, and Henk was at the back of the break that was just about to be caught. He looked back for just a moment to see what the gap was, and when he did, he overlapped wheels with the riders in front of him, who also happened to be an old teammate of mine. They were two of the most experienced guys in the field that day, but that didn't help them. We were easily doing 55 mph when Henk hit the deck hard."

Horner's role in Reading the Race is to offer anecdotes that illustrate the issues addressed by Smith. Here is offering the skinny on how a rider can use the medical car to get up hills, he pulling this stunt during the third stage of the 2006 Tour:

"Every good European pro knows that as long as the medical car is servicing you, you have permission to hold on to the car. As soon as the car pulled up, I asked the doctor to spray some numbing spray on my open wounds. After he attended to the wounds - and for the record, I pointed out every single open would I could find for him - I waited until he had put everything back into his medical bag before I asked him if he could please cover them up with bandages, too.

"By the time he had finished covering the open wounds we were almost to the top of the climb, but not quite there. I needed one last bit of help from the doc before the climb would finish. Once again, I waited until he put his entire medical bag away before I asked him fro some Advil. His expression was priceless, as he once again had to open his bag and unload all of the contents he had just put away in order to reach the Advil, which was of course at the bottom of the bag. He handed me a couple of tablets just as the climb was finishing. I thanked him, took a sling off the side mirror of the car, and rejoined the back of the group just as the climb finished."

Horner's anecdotes make Reading the Race a worthwhile read for those whose primary interest is the European pro peloton, but really the book isn't aimed at the armchair rider, it's a practical manual for those who want to learn the tricks of the trade. Particularly those familiar with the American racing scene.