Share All sharing options for: Amigo, by Pedro Horrillo and Nando Boers 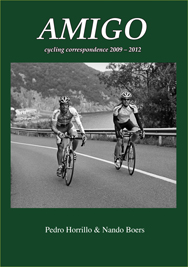 Title: Amigo - Cycling Correspondence 2009 - 2012
Authors: Pedro Horrillo and Nando Boers (translated by Aad Janssen and Adrian Bell and with photographs by Timm Kölln)
Publisher: Mousehold Press
Year: 2014
Pages: 225
Order: Mousehold
What it is: An epistolary dialogue between the Basque rider Pedro Horrillo and a Dutch journalist, Nando Boers
Strengths: It is a book you will want to read especially for the final two letters which are beautifully written (as are many of the others)
Weaknesses: At times Horrillo's responses can be as frustrating as they are illuminating, but that simply reflects the reality of the situation he found himself in

"I remained oblivious to that strange feeling of having journeyed through time until, unexpectedly, I saw my reflection in the mirror."

So writes Pedro Horrillo - the former professional cyclist who rode for Rabobank and, before that, Quick Step, Mapei and Vitalicio Seguros - early in Amigo, an epistolary dialogue between the Basque rider and a Dutch journalist, Nando Boers, in which the two planned to document a single cycling season, exchanging emails that would tell a story from inside the peloton and out.

"You find the book in the process of writing it. That's the adventure of the job. If it were all mapped out in advance, it wouldn't be very interesting."

That's a quote from Paul Auster, a writer both Horrillo and Boers have a certain liking for, contained - coincidentally - in a book of letters between the American post-modernist and the South African Booker prize winner JM Coetzee. It was quoted by Boers, he having found himself reading the book during the creation of Amigo. While Horrillo and Boers may have had their own ideas on how Amigo should begin and what direction it would travel in, their collaborative efforts were always destined to take them to places neither had imagined, and end who knew where.

Horrillo turned professional in 1998 and as he entered his dozenth season on the professional circuit he was beginning to realise that the end was drawing near:

"After eleven seasons as a professional, and now beginning my twelfth, I've begun to feel that this could well be my last year in this circus. And that's something really new for me, and you don't know just how painful it is. This year, for the first time, that idea began going round and round in my head after the first turn of the pedals in December."

Most professionals don't get to choose the time or manner of their exit from the sport. Only a few go out at the top, for many the end comes with the whimper of no contract for the following season. But for a lot of riders that is not the end of their time within the sport, many find work within a team, as a directeur sportif or in media or whatever. For many riders, then, even if they don't see the end of their cycling careers coming, they still see themselves staying part of the family. Horrillo, though, when he thought of the end of his career, he imagined something different:

"I had always thought that my future would break from my past in a traumatic way. A clean fracture from healthy to smashed in a single instant."

One day he would be part of the cycling family, the next he wouldn't.

It happened on the eighth stage of the 2009 Giro d'Italia. LPR's Danilo di Luca was in the maglia rosa but Horrillo's team leader Denis Menchov was still in contention, challenging for victory. As the peloton climbed the Culmine di San Pietro, 65 kilometres into a 200 kilometre stage, Horrillo was gapped and slipped out of the group containing Di Luca and Menchov. On the way down the Spaniard pushed to make up the time lost on the way up - a couple of dozen seconds, no more - as he could still be useful to his team leader on the run in to Bergamo, if he could rejoin the front-runners.

No one saw exactly what happened and Horrillo, well he doesn't remember. One moment he was in control of his descent, the next he was into a rust-spattered crash barrier guarding a left-hand bend on the descent and freefalling over the edge. A ledge, two metres by one metre, arrested his descent, 80 metres down. He had fractured his femur and his knee, broken ribs that pierced his lungs, and cracked vertebrae. This wasn't Bernard Hinault in the Critérium du Dauphiné Libéré, going over the edge and climbing back out to ride on. This was Wim van Est having to be hauled out of a ravine in the Tour de France. Or, worse, Roger Rivière, with his broken back.

No one saw exactly what happened, but the riders behind Horrillo saw his bike, parked up by the crash barrier, sitting there like its rider had just popped behind a boulder or a bush for a piss.

And so, just three months into their planned season-long correspondence, the letters from Horrillo stopped coming. In his last correspondence, written two days before his crash, the rider related a story to Boers about Immanuel Kant, and an ingenuous solution he found for resetting a stopped clock. In that same letter he talked about a passion of his:

"Ever since I've had a certain amount of spare cash I've had the desire to collect maps. Why? Because a map is the best adventure book you could ever read. Imagine my feelings the first time I got my hands on an atlas."

Cartography and philosophers. You could imagine yourself reading Paul Fournel ("Road maps are for me dream machines. I like to read them as if they're adventure stories.") and not the musings of a professional cyclist talking about life inside the peloton.

Boers had begun his correspondence with Horrillo with an observation about coincidence. At the Tour of California in February, Horrillo had finished the prologue in fifty-fourth place, with the 54 dossard pinned on his back:

"Is there such a thing as coincidence?"

Try a different coincidence. The Culmine di San Pietro. Culmine: a summit, a climax. Pietro: Peter, Pedro. The summit of Saint Peter, it's also Pedro's climax. Which it was that day in the 2009 Giro d'Italia, the culmination of Pedro Horrillo's life as a professional cyclist, the last day he raced among his peers. The clean break he'd earlier that year imagined his career ending in had come about in a way no one would have wished to imagine.

Or this one: the book Horrillo was reading during that Giro of 2009 was  Roberto Bolaño's 2666. On the morning of the stage that crossed the Culmine di San Pietro, Horrillo left his copy of the novel on his seat in the team bus. The page he was last reading was marked. This is from that:

"In the middle of November the body of another dead woman was found in the ravine of Podestá. She had multiple fractures to her skull, with a loss of brain matter. Some marks on her body indicated that she had put up a fight."

Following his crash, Horrillo took time to return to the world, to find his feet anew - to restart his own stopped clock - and the correspondence between the Spanish cyclist and the Dutch journalist became quite one-sided. Most of the rest of 2009 was written off as far as communication from Horrillo was concerned, as was much of 2010. If there was progress in 2011 it was set back by the death of Wouter Weylandt in the Giro, a death followed quickly by that of Xavi Tondo. For Horrillo, they brought up suppressed memories, memories he was not yet equipped to deal with:

"Two years ago, minus a few hours, six hours to be precise - it is documented that my leap into space happened around 14.10 - I set out on a long journey that took me to places I never imagined, a journey that was much more prolonged than any other; in fact it's a journey I'm still on and I still can't detect the point on the horizon where it will end. It's said that the best journeys are those that change you, those on which you arrive a different person from how you were when you set out, in spite of the mirror reflecting the same face, the only difference being the passage of time."

Horrillo did eventually negotiate a way past the blockage and respond to the many letters Boers had written but which had previously gone unanswered. With the replies coming a year, two years, even three late the responses lack the immediacy of the questions, but they are still revealing, in a different way. Many are about Horrillo dealing with the crash and its consequences, but there is a lot more in there besides, more about certain races and certain moments, and about cycling in general, the state of the sport. There are also certain themes that run across the whole correspondence - such as the issue of coincidence - and it may take multiple readings to fully tease these out, to find the hidden depths of the correspondence.

Also running across the whole collection is a journey Boers himself was also undertaking, one he had probably not expected to set out on: his passion for the sport dissipates as the doping tales mount. 2009 was the return of Lance Armstrong, and all that that entailed, from Floyd Landis beginning to speak out through to the USADA judgement. There was Alberto Contador's clenbuterol bust and all that that entailed. Closer to home - for Boers, a Dutch journalist - there was Thomas Dekker, there was the whole Rabobank saga, events which hit Dutch cycling hard. There was even the (alleged) mechanical doping of Fabian Cancellara's bike. All took their toll on Boers:

"I'm having a hard time of it, cycling can't go on like this much longer. I fear the day that I will turn away, disgusted with so much hypocritical behaviour, not just by riders, but also by sponsors, race directors, team managers, journalists and administrators who do nothing about this problem."

One of the more frustrating aspects of the epistolary approach is that Boers can - and often does - ask questions which Horrillo simply declines to answer, or chooses to answer in a less than full way. This is particularly true of some of the doping questions, although in time and over several letters - in some of which Horrillo includes passages from pieces he wrote for El País - Horrillo's position on that topic becomes clearer, in a roundabout sort of way.

Amigo closes with two quite lengthy letters from Horrillo, written in late 2012, in which he confronts the demons of his crash and these, along with some of the early correspondence, are the real gems of the book. The other letters are the digging away of the topsoil in order to get at what lay beneath: they are ultimately rewarding, but not as beautiful as the book's mother lode.

The first of those final letters concerns events in the hospital in Bergamo in the days after Horrillo's crash, is a letter which is intense and surreal and startlingly funny. Horrillo relates as fully as he can the dreams, the hallucinations he suffered in the days after the crash, dreams fuelled in part by that novel he had been reading, Bolaño's 2666, as well as by the medication he was on and the trauma of his accident. The second letter sees Horrillo return to the Culmine di San Pietro, undertaking a pilgrimage to the place where he was born again, where a professional cyclist passed and a new life began.

These final two letters are the reason you will want to read Amigo. While either would fit perfectly into a magazine like Rouleur - they are of that quality of writing - the correspondence leading up to them, which can be equally frustrating (reflecting the reality of the time) and illuminating, gives them extra meaning.