Perhaps more remembered for the Tour he lost (1971) than the Tour he won (1973), Luis Ocaña was described by Eddy Merckx as his "most dangerous rival." Alasdair Fotheringham tells his story in this new biography of the Spanish champion.

Share All sharing options for: Reckless, by Alasdair Fotheringham 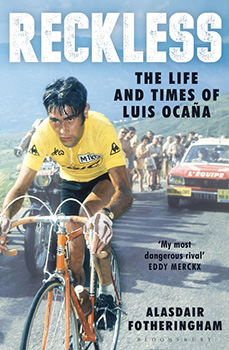 Title: Reckless - The Life And Times Of Luis Ocaña
Author: Alasdair Fotheringham
Publisher: Bloomsbury
Year: 2014
Pages: 296
Order: Bloomsbury
What it is: A biography of 1973 Tour de France winner Luis Ocaña, the man who made Eddy Merckx seem mortal at the 1971 Tour before revealing his own mortality
Strengths: The 1971 Tour is one of the best, the 1973 Tour somewhat underrated, Fotheringham gives you a fresh view of both
Weaknesses: An unconventional career probably needs more than a conventional biography

Monday, May 5th, 1969. The Vuelta a España. Having started in Bardajoz - away down in Extremadura, in the south-western corner of the Iberian peninsula - the Vuelta had travelled up and through Cáceres, Talavera de la Reina, Madrid, Alcázar de San Juan, Almansa, Nules, Benicasim, Reus, and Barcelona before arriving at Sant Feliú de Guíxols on the Costa Brava, from where the riders would be departing for the race's etappa reina. Behind them lay 1,960 kilometres of racing across eleven stages, ahead another seven stages and 944 kms. For Luis Ocaña (Fagor), this was where the real race was about to begin. He had tasted success in the opening prologue time trial, but had to share the glory with Antonio Gómez del Moral (KAS) - which caused the organisers to issue neither rider with a leader's jersey - and then had seen the lead pass through the hands of Michael Wright (Bic), Luigi Sgarbozza (Max Meyer), Raymond Steegmans (Goldor), and Ramón Sáez (Pepsi). Throughout, Ocaña had sat within striking distance of the top of the GC - starting the stage he was 1'22" behind the maillot amarillo - now it was time to seize his crown. All that lay between him and glory were the five cols and 151 kms to be raced along the road to Moyá. And at the end of it, there was glory. Of a sorts.

From the first climb onwards, Ocaña ripped the peloton to pieces, sending riders out the back, until only he and one other rider remained. But all his effort, it was wasted. Fifteen kilometres out from home, on the last climb of the day, that one rider who had stayed with Ocaña rode away from him. The chasers, who had been two minutes and more behind the break, swept Ocaña up and the best he could do was finish a minute behind them, 4'17" down on his erstwhile breakaway companion, Roger Pingeon (Peugeot), who had claimed the stage and the maillot amarillo. Add in the 39" advantage Pingeon had over Ocaña at the start of the stage and the Spaniard was nearly five minutes in arrears and as good as out of the running for overall victory.

Ramón Mendiburu: "It was a hilly stage to Moyá, cold and rainy. Ocaña had Pingeon on his wheel for about 30 kilometres, and he didn't even take one turn at the front. So when it came to the final climb, which was a really insignificant one, Luis cracked completely. He lost so much time that it didn't matter how much he pulled back [later in the race]."

Luis Ocaña: "[I] lost the Vuelta because I had made the mistake of telling Pingeon I was not in good shape. And Pingeon immediately realised that, in my one moment of weakness, this was the point to attack."

Mendiburu: "Had Ocaña not lost those three minutes in Moyá, with the two and a half he pulled back on Pingeon in the final time trials, he could have won it riding backwards."

Luis Puig: "We've lost the Vuelta, but found a champion."

Which is Luis Ocaña more famous for, winning the 1973 Tour de France or losing the 1971 one? The latter, surely? The win, that was achieved in the absence of Eddy Merckx and while Ocaña's victory was à la Merckx - half a dozen stages won, a sixteen minute advantage over his nearest rival, the yellow jersey taken and held since the end of the first week's racing - very few could tell you who he beat and how he beat them. The 1973 Tour, it's one of those overlooked races in the canon of cycling mythology. And the reason it is overlooked is that it lives in the shadow of 1971. It lives in the shadow of a Tour in which, over the course of four days - between the finishes at the Puy-de-Dôme and Orcières Merlette - Ocaña almost single-handedly dismantled Merckx's armour, and then over the course of the next four days Merckx showed that even without armour he was still a dangerous rival. Those eight days, they blot out everything else in the career of Spain's second winner of the grande boucle, they eclipse almost everything else in the career of Jesús Luis Ocaña Pernía.

You could, if you wish, analyse that day in the 1969 Vuelta, the day when Ocaña shone like the sun before being blotted out by clouds, and explain all the things the Spaniard did wrong, the juvenile errors he made. You would doubtlessly point out how he should have made Pingeon work, maybe that he should have worked to drop Pingeon, certainly that he should never have told Pingeon when he was weakening. But all of that, that would miss something fundamental about what Ocaña was doing that day. He wasn't riding for the win. Ocaña was riding to make a point: "He'd had a blazing row with everybody the night before at the team hotel in Barcelona," Jesús Aranzabal tells Alasdair Fotheringham. "He thought they weren't pulling their weight ... so he decided he'd ride everybody off his wheel."

In the legends of almost all the great champions you can find days when they threw caution to the wind and tactics with it and just went and did something, and it came off and their moment of madness became an exploit, a story passed on from one generation of cycling fans to the next. But those legends sit beside stories about those same riders in which they rode tactically, conservatively, carefully. Luis Ocaña, though, well it's not that he didn't seem to know how to do the latter, it's more that he just didn't seem to want to. As his widow, Josiane explains to Fotheringham, he only knew one way to ride:

"at the end of the day, my husband's biggest problem was that he never raced to win, it was purely because he liked the battle. He had to be in a fight of some kind, once the race had started, that was it - c'etait parti - and the sports director would say what he liked, he wouldn't listen, he just did whatever he wanted and, afterwards, that produced one result or another. He always used to say he didn't race for a palmarès. If he had done that, if he had thought things through beforehand then he would have a lot more victories to his name."

The central theme of Alasdair Fotheringham's latest biography of a Spanish champion - following on from his biography of Federico Bahamontes, The Eagle of Toledo - is given away in the book's title, Reckless. Working chronologically through Ocaña's career, Fotheringham shows example after example of Ocaña throwing caution to the wind and doing something because it was what he felt like doing, both on and off the bike, and damn the consequences. Sometimes those consequences were races won or lost, sometimes those consequences were bones broken or lives endangered. On the bike, that recklessness can be passed off as panache - and at the book's end Fotheringham makes a point of calling Ocaña Monsieur Panache - but off the bike such a trait is less laudatory, less something to be celebrated. On the bike, we can call it style, off the bike, it's some style of craziness.

Reckless not about putting Ocaña on the psychoanalyst's couch and identifying the root of whatever it was that drove him to be the man he was. Yes, some of it is explained away by reference to the Spaniard's childhood (he was born during the Years of Hunger that followed the Civil War) and by reference to a father who was somewhat overbearing. But, for the most part, Reckless is about Ocaña's cycling career. Fotheringham covers this efficiently and effectively. Through interviews with Ocaña's peers he builds up a picture of Ocaña the cyclist. The telling of the tale is conventional, chronological, cradle to grave, everything happening in the right order.

So why did I not warm to the book? I didn't dislike it, I just didn't warm to it. The fault here could be with me, the reader. Perhaps I had a problem with the thought that the book was somehow celebrating recklessness. Perhaps I just don't buy the line sold by Eddy Merckx that Ocaña was his most dangerous rival (it sounds too much like the perfect put down of everyone else who ever tried to challenge him). Perhaps, then, the problem is with my cynicism. On the other hand, perhaps the problem is that a conventional cycling biography is wrong for such an unconventional rider: the conventional cycling biography is built around certain victory peaks, typically at the Tour, there's an ebb and flow in the narrative, and that's not quite there in Ocaña's case. Ocaña lived his life to the beat of his own drum, and perhaps a biography of him needs to find a different beat, stray away from the formula and do something different.

Regardless of how warm Reckless made me feel, I would still recommend it to others. The way it deals with the 1971 and 1973 Tours - and some of the stories from other races - do make it a recommended read. And regardless of what I believe about the Merckx quote, there is no denying that Ocaña influenced others: Bernard Thévenet - the man Ocaña beat by nearly sixteen minutes in the 1973 Tour - saw him as a role model. Pedro Delgado says the Ocaña was a childhood hero (coincidentally, Bahamontes was a childhood hero for Ocaña - who does Contador offer as his childhood hero, Delgado or Miguel Indurain?). Thierry Cazeneueve - the man behind the Critérium du Dauphiné Libéré, which between 1970 and 1973 Ocaña enlivened - sees him as a reference point for all cycling journalists of that era. And he's still serving as a reference point, today for a generation that dreams of Marco Pantani, that dreams of panache.