Share All sharing options for: Lady Cycling, by FJ Erskine 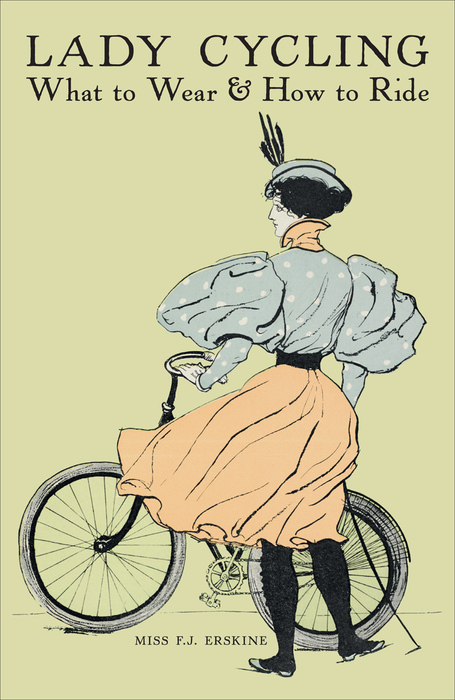 Title: Lady Cycling - What To Wear And How To Ride
Author: FJ Erskine
Publisher: British Library
Pages: 76
Year: 1897 (reissued 2014)
Order: British Library
What it is: A late nineteenth century guide to cycling, written for women
Strengths: You'll probably read it as if you're watching that Fast Show sketch that mocks the ideas of generations long gone and how - compared to today - the views seem marvellously antiquated
Weaknesses: If you're suffering from an irony deficiency, you may not get it

"The other day I came across an exhaustive paper on whether, from an hygienic point of view, ladies should cycle. 'Whether they should or not, ladies are cycling,' the author said, 'and so far the results seem to be extremely beneficial.' On no point, however, has a hotter controversy raged. Perhaps, like other things, the awful tales one heard had a certain very small kernel of truth wrapped up in a great deal of exaggeration. As a matter of fact, the question as to whether it is good or bad for women to ride simply lies in a nutshell. If they ride fifty miles where ten ought to be their limit - in short, if in cycling they cast reason and common sense to the four winds of heaven - then, beyond all doubt, cycling is harmful."

So opens Lady Cycling - What To Wear And How To Ride, an 1897 guide to cycling for ladies, written by FJ Erskine. Or, as the front cover insists on asserting, Miss FJ Erskine. This is an end-of-the-century cycling book for women, written by a woman.

A nineteenth-century guide to cycling surely has little value today, even if it is written for women by a woman, when there are contemporary versions by the likes of Helen Pidd or Cathy Bussey? But that would be to take Lady Cycling seriously when in fact it is a pleasant little triviality and an elegant little cultural curio. The publishers themselves, in the blurb for the book, don't recommend taking it seriously, noting that Erskine's "humorous advice evokes an age when cycling was a daring pursuit for the modern woman."

So what is that advice? Let's start with some thought for food. On the issue of nutrition, Erskine (who Jack Thurston - the Bicycle Show - reliably informs me was a columnist for the CTC gazette) has much advice to offer. Surprisingly, quite a bit of it involves alcohol. In passing, she offers the suggestion that "egg beaten up in milk, with a teaspoonful of whisky, is excellent when a ride is done up" and elsewhere that "it is best for riders to carry some brandy and Eau-de-Cologne - especially in hot weather - also a small box of vestas." Later, she goes into detail on the issue of feeding:

"cyclists, like horses, should be good feeders. They should start work with coffee and toast, and either an egg or two or ham - with both, if the latter is not too rich. Half-an-hour after this, but not later than nine o'clock AM, they should be en route until twelve. In the sultry days of July and August the wise rider will carry a good lunch - sandwiches, biscuits, claret, chocolate, raisins, and other oddments - and have a quiet picnic in the shade, with either a companion to chat to, or a favourite author to renew acquaintance with."

Having halted at twelve, the Lady Cyclist is supposed to rest until three, and then complete her journey, which should be done no later than six:

"A bath, change, and good plain dinner should follow, then either a stroll or a pleasant chat, and bed. The rider should sleep like a top, and be up by seven the next morning, fresh and bright."

But who should you ride with? Well not, according to Erskine, a club:

"women are not, as a rule, fitted for club life. They are not so broad-minded as men - they have an infinity of social rings, one within the other, and when in authority are apt to be arbitrary and tyrannical."

Of the sporting side of cycling, Erskine has little to say apart from this:

"women ought not to race, if they have the slightest regard for their own health; and if they do it is a suicidal policy, which is bound to end in disaster."

Cycling, for Erskine, should be purely a leisure pursuit, and taken quite leisurely. Preferably as an adjunct to something else:

"A hobby of some sort, either a sketch-book or camera, is a great help to taking an excursion easily. So also is a pursuit, such as archaeology, botany, photography."

Of these, sketching and painting are by far Erskine's favourite:

"There are so many pretty quaint bits get-at-able on the cycle, simply making one long to transfer them to the sketch-book, which is an agreeable reminder of past rides, as well as of absorbing present interest. The requisites either for oil or water colour are so easily carried, and the cycle is such a help, it is a wonder that more cycling sketching-clubs are not formed. [...] Every cyclist who can sketch should sketch. Either tripod or easel can be carried in a pair of metal handle-bar carriers, costing 1s 3d."

A shilling and thruppence for some handle-bar carriers? Well to give some perspective on that, let's consider the cost of a bike:

"The initial cost of a machine is certainly almost as high as that of a pony - but, then, that pony requires its own entourage, to say nothing of a large amount of thought to keep it in good working order. Then to a pony must be added a cart - another £25, harness £7, shoeing, feeding, clothing, and a groom; whereas the cycle does not require more than a careful fifteen minutes' cleaning, and fair handling."

The issue of ponies raises an aspect of nineteenth century cycling which had heretofore totally passed me by, cycling gymkhanas:

"The bicycle has come out in many curious lights, but not the least is the fact that it has initiated a new kind of entertainment for bazaars, garden fêtes, and other summer diversions. The East has joined hands with the West, and it has been found possible to have a very passable series of gymkhana sports by using cycles instead of ponies."

These are not, though, a match for the real thing:

"A pony, with its life and energy, is only feebly represented by the steel cycle. It may wobble and dance in a way distracting to its rider, if amusing to the looker on, but the thousand and one 'ways' of the smart polo pony heretofore used are missing."

As with anyone writing in the nineteenth century about cycling - and, to be honest, as with many who write about it today - Erskine perhaps over-eggs the pudding when talking about the revolution she sees cycling setting in train:

"The effects of this movement [toward cycling], in a social sense, are likely to be far-reaching. It is probable that its influence, as levelling up the different ranks of society, will be for good. Town people will see more of country folk, and get to have a more accurate idea of the vital interests of the people at large. A cycling senator, being incognito, will very likely be able to form a more just idea of country problems than from studying the mere routine work and reports of his own district."

Where Erskine's advice today seems most humorous is when she turns to the topic of dress and just what the Lady Cyclist should and should not wear. Try this:

"For park riding, we must have an artistically cut skirt, artfully arranged to hang in even portions on each side of the saddle; and fashion decrees, what common-sense does not, that a blouse of silk or cotton, belaced, and with huge puff sleeves, is en règle for our bodies to be arrayed in."

"Some wise people say that corsets should be discarded for cycling. This is not correct. There should be no approach to tight-lacing, but a pair of woollen-cased corsets afford great support; they keep the figure from going all abroad, and protect the vital parts from chills. Special woollen-cased corsets are made by at any rate two manufacturers, who have spared no pains to provide a safe and good corset for cyclists."

What Erskine would make of the present cycling fashion one shudders to think - though I'm willing to bet she could write at length about precisely why white shorts are a sin against God and nature.

While hindsight makes much of Erskine's advice seem quaint and funny, in some areas what she was saying is still true, to some extent. There's this:

"People are a great deal too apt to gauge the price of a machine by the beauty of its enamel and plating. In reality, the money value of the whole cycle lies in the bearings. The ball-bearings in cheap machines are so only in name."

"A very light machine is a great mistake. The American machines are excellent for park and easy wear, but for a rough road in the country they would be extremely uncomfortable, even if they stood the continued jolting. As I have said before, if a machine is light (26 lbs) it must be very well made."

"Saddles, also, are a weak point in a lady's machine. It is next to impossible to give reliable advice concerning them."

A century and more on since Erskine wrote her little guide for Lady Cyclists, some things haven't really changed all that much after all.