Legends of the Tour, by Jan Cleijne

The history of the Tour de France as you've never seen it before.

Share All sharing options for: Legends of the Tour, by Jan Cleijne 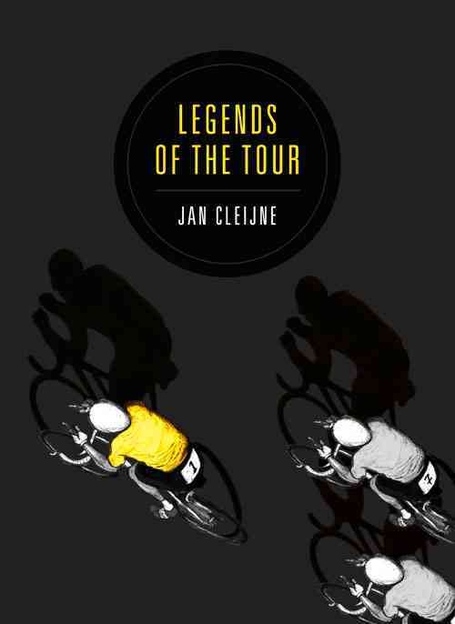 Title: Legends of the Tour
Author: Jan Cleijne (translated by Michele Hutchinson and Laura Watkinson)
Publisher: Head of Zeus
Year: 2014
Pages: 160
Order: Head of Zeus
What it is: A bande dessinée take on the history of the Tour de France, telling its story through a selection of the Tour's high and low points
Strengths: It's the history of the Tour as you've never seen it before, Jan Cleijne's hand-drawn images capturing the vitality of the race in a way few other books have managed
Weaknesses: So many stories, so little space

Let's begin with a picture: 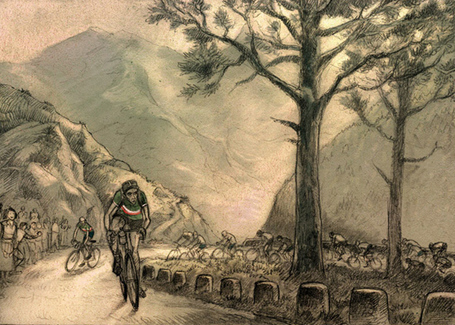 That's a scene from the 1949 Tour de France, as re-imagined by Jan Cleijne in Legends of the Tour. That's Fausto Coppi out front, with his Squadra Italia team-mate Gino Bartali giving chase behind, the two Italians distancing the fading peloton. This is the first move in a day on the Tour that has gone down in history.

Coppi - in his début Tour and with a victory in the Giro d'Italia weighing in his legs - he'd had his défaillance or whatever it was on the road to St-Malo, tossed his toys out of the pram and his Tour dreams in the dustbin. On this day, the day depicted by Cleijne, the day the Tour reached the Alps after having already crossed the Pyrénées, Coppi was 14'16" off the maillot jaune, which was being sported by his compatriot Fiorenzo Magni, leader of the Italian cadets' squad. Ahead of him, separating Coppi from yellow, were riders like Bartali (at 12'34") Belgium's Stan Ockers (at 11'29") and Switzerland's Ferdi Kübler (at 10'14"). Edourd Fachtleiner, who had finished second two years earlier and was now riding for the regional Sud-Est squad, he was just 2'10" off Magni's pace. At the end of this day, the day depicted by Cleijne, the day the Tour reached the Alps, Magni was 1'28" off yellow and Coppi was up to second overall, just 1'22" behind Bartali. He could have been in yellow, but this day, it was Gino Bartali's birthday, and he asked a gift of Coppi, the stage win, one more day in yellow. That gift, as much as the time the two Italians put into their rivals between the base of the Izoard where they simply rode away from everyone else - the moment depicted by Cleijne - and the finish in Briançon is why this stage is such a legend, two rivals who the polemica said hated one and other working together and able to ask and receive gifts. For all the venality you can find at the Tour, there was then - and there still is now - a certain sense of chivalry that, when heeded, makes you proud of this silly little sport we call cycling. 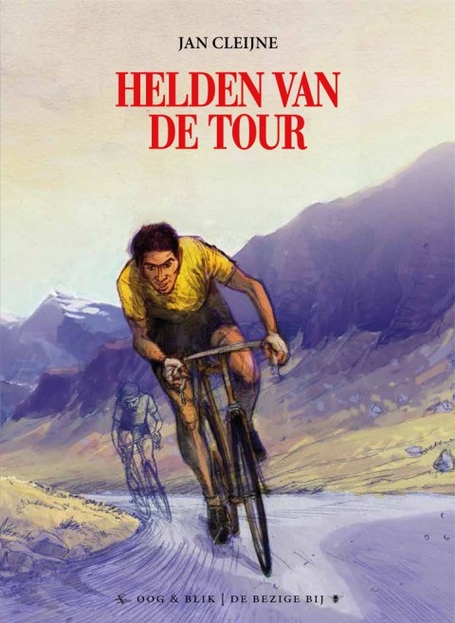 Legends of the Tour, then, is what it says it is on the cover, a collection of Tour de France legends. Maurice Garin. Parc des Prince. Pottier's mountain dance. The Pyrénées, Octave Lapize. Christophe in the forge. The First World War. The maillot jaune and Eugène Christophe once again. National teams on yellow bikes. Charles Pélissier. On and on and ... well I'm not going to list all the legends Cleijne addresses in this English translation of his 2013 Helden van de Tour, suffice to say there's a broad range of them.

An awful lot of the legend of the Tour de France has been told by photographers and there are any number of illustrated histories of the Tour. Most of them have their moments. But none of them are much more than coffee table clutter. And we must acknowledge that while, from its earliest days, cameras have told the story of the Tour, they have told a very incomplete version of the story. Many of the best moment's in the race's history have been missed by the Tour's legion of shutterbugs.

Take as an example one of the most legendary days in the Tour's history. Tuesday, July 6, 1926, stage ten of the twentieth Tour, the day the 76 riders left in the peloton had to cover the 323 kilometres separating Bayonne and Luchon, the Aubisque, Tourmalet, Aspin, and Peyresourde all standing in their way. A day when - as was normal in those days - the riders had to be on their bikes a little after midnight and couldn't expect to be off them until late in the afternoon. A day made epic by weather foul enough to equal all the stories told of meteorological madness in the Giro d'Italia. The roads - dirt-tracks at best - became seas of mud as rain poured down on the riders pretty much from the off in Bayonne, riders had to resort to pissing on their chains to clear the mud building up on them.This was a day when the first rider home took more than seventeen hours to reach Luchon, and the rest rolled in over the following five hours, with search parties having to be sent out to find them. Not a day suited to being captured by the photographers' lenses. But a perfect day to evoke by hand-drawn images, Cleijne spreading it out over seven pages - thirty-three frames - and capturing something which (in my experience) no other telling of it has been able to do.

Legends of the Tour is not the first time the big buckle has been done in strip form - some more can be found here - but it is (to the best of my knowledge) the first time anyone has taken something from the European bande dessinée tradition and put it out on the UK or American market. Within the realm of graphic novels - or, if you must, comics - Legends of the Tour sits on the non-fiction shelf, alongside the likes of Joe Sacco (Palestine, The Fixer) and Marjane Satrap (Persepolis). But really it is more akin to the work of the likes of Garth Ennis, Frank Millar or Alan Moore (Cleijne acknowledges Moebius - Jan Giraud - as the primary influence on his overall style). There's a vitality to it that you associate with traditional graphic novels - stories of superheroes - something which is not often found in more recent graphic non-fiction. 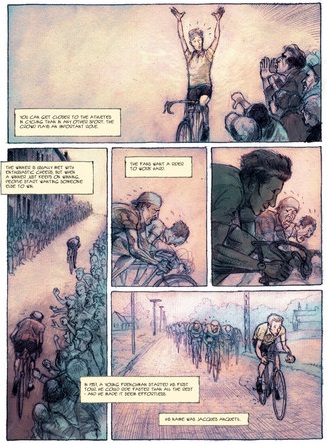 Some of the other BD-representations of the Tour's history have been ... well rather ordinary, indebted to the simplicity of image to be found in Tinitin or Asterix. Cleijne, though, is willing to take risks, to really try and let the images tell the story and not just illustrate it. The early Tours, they are depicted in sepia, real colour doesn't arrive until the story reaches the advent of the yellow jersey. Thereafter, the colours only slowly get more bright, more vibrant. 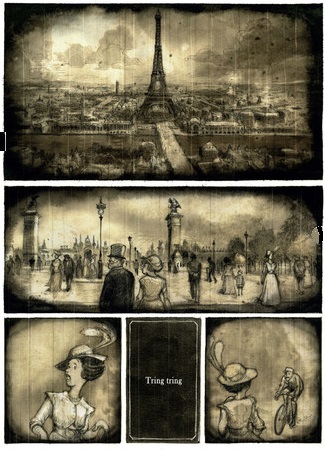 Cleijne also takes risks in the telling of the tale. In 1930, when national teams were introduced for the first time, France's André Leducq was looking set to deliver the first home win since Henri Pélissier in 1923 until he suffered a fall descending the Galibier. When his pedal then broke Leducq suffered what can only be described as a meltdown and it took the selflessness of his Équipe France team-mates to get him going again and secure his victory. Cleijne depicts that meltdown as a sort of out-of-body experience. 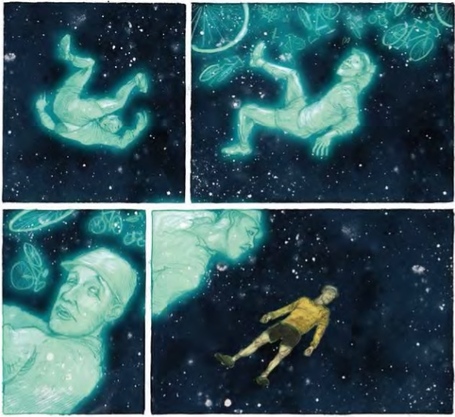 There's also humour in the way Cleijne tells the tale. The 1979 Tour was a crushing victory for Bernard Hinault over Joop Zoetemelk but it was still an exciting race, Zoetemelk refusing to bow down and die, even challenging Hinault on the last day, the ceremonial ride into Paris, the two ending up off the front of the peloton and the maillot jaune actually contesting - and winning - the sprint on the Champs Élysées. 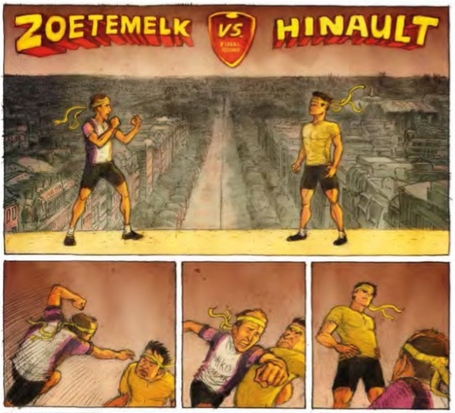 Legends of the Tour, then, is the history of the Tour as you have never seen it before. A fun, vibrant telling of the story that taps all the emotions and reminds you - if you needed reminding - just why this race has endured, despite all the times people have rushed to publish its death notice. 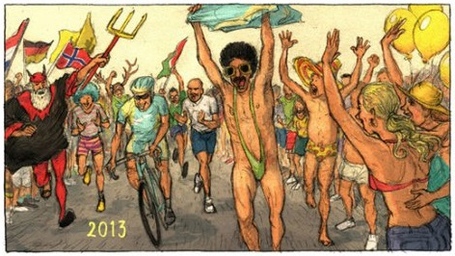