The Loyal Lieutenant, by George Hincapie

The autobiography of Big George, the most loyal of loyal lieutenants.

Share All sharing options for: The Loyal Lieutenant, by George Hincapie 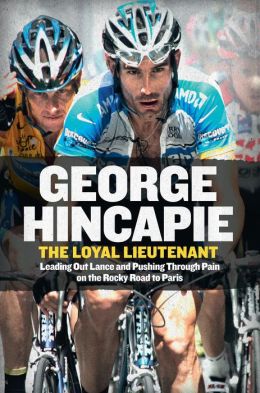 Title: The Loyal Lieutenant - My Story - Leading Out Lance and Pushing Through The Pain on the Rocky Road to Paris
Author: George Hincapie (with Craig Hummer)
Publisher: HarperSport
Year: 2014
Pages: 299
Order: HarperCollins
What it is: The autobiography of Big George
Strengths: It's Big George
Weaknesses: It's an autobiography that doesn't even capture the voice of the subject nor does it adequately explain the role doping played in his career

In Akira Kurosawa's Rashomon the same story is told multiple times, from different points of view, each time with key details different. Looking at my ever-growing pile of Lance Armstrong And My Part In His Downfall books recently I found it hard not to think of Kurosawa. The wife's story, that could be Seven Deadly Sins, from David Walsh, who certainly seemed to become joined at the hip to Armstrong. The other journalists' stories - Reed Albergotti and Vanessa O'Connell with Wheelmen and Juliet Macur and her Cycle of Lies - they could perhaps jointly be the woodcutter's tale. Tyler Hamilton and his The Secret Race, that would have to be the bandit's story. The Samurai's story - Armstrong's own version of events - is yet to arrive and, until it does, I figured we would have to rely on that other good soldier, George Hincapie, Armstrong's loyal lieutenant.

And then I actually read the book and realised that that is utter tosh, for The Loyal Lieutenant is even less about Lance Armstrong and the author's role in his downfall than Michael Barry's Shadows On The Road was. The doping of the Gen-EPO years is not really the story being told in The Loyal Lieutenant, Hincapie quickly moving on from his decision to dope to barely registering the fact that he was actually doping: "my drug use took on the significance of simply taking vitamins." And something that insignificant is not the type of thing you can expect to be told much about in an autobiography.

I could now spend the rest of this review criticising Hincapie for being less than forthcoming in respect of doping. Some probably expect me to do just that. But there's something more important that needs dealing with, and that's the book itself: this has got to be one of the most ineptly written cycling autobiographies it has been my misfortune to read in the four years I've been writing these Café Bookshelf pieces.

Let's start with some basics. When it comes to sporting autobiographies, most of us have low expectations. A couple of funny anecdotes and something that approximates the voice of the subject and bish bash bosh, Robert's your mother's brother, you've got a sporting autobiography that some numb-nut on the sport's pages will claim is brilliant. In fact, you can get away without the anecdotes, most people will settle for just getting the voice right, expectations really are that low when it's the name on the cover that's really selling the book, not the stuff within the covers.

In the best sporting autobiographies, the voice is practically pitch perfect. Consider something like Mark Cavendish's Boy Racer and At Speed, or Robbie McEwen's One Way Road, in which their ghosts - Daniel Friebe and Edward Pickering - were all but invisible, the voice of the rider coming through clearly, pulling you along. For The Loyal Lieutenant, though, Craig Hummer - Hincapie's ghost - has managed to all but drown out the real voice of George Hincapie with his own. Consider, if you will, lines like the following, and see if you can imagine Hincapie actually making these comments:

"I was unique in my dichotomous dedication to my yearly double duty."

"The first part of the day was dominated by mind-numbing, myriad manoeuvres."

"the first hour of racing is always a cornucopia of attacks"

If we move beyond Hummer putting words in Hincapie's mouth that just don't fit there - expanding his vocabulary, giving him a rather writerly tendency to alliterate - we find him turning the rider into a walking talking Wikipedia. One example for you: at one point, apropos of nothing, Hummer has Hincapie explaining the various jerseys of the Tour, and offering all sorts of irrelevant stats ("Merckx is the only cyclist in history to win the yellow, green and polka-dot jerseys in the same year (1969). [...] Six men who have won the white jersey have gone on to win the yellow jersey [...]. On four occasions, a cyclist has won the young rider classification and the general classification (yellow) in the same year"). Is that really the sort of thing Hincapie just rattles off when you sit him down and get him talking about the Tour de France?

As well as Hincapie himself, Hummer has gone and spoken to a lot of people who know him (Hummer would probably call them a cornucopia of myriad friends, family and former team-mates) and it's when we come to these guest voices that the real problem with The Loyal Lieutenant becomes clear. As well as the family - brother, mother, sister, father - and friends from his youth, Hummer has voices from the pro cycling ranks, the likes of René Wenzel, Jim Ochowicz, Lance Armstrong, Sean Yates, Frankie Andreu, Jonathan Vaughters, Michael Barry, Mark Cavendish, Cadel Evans, Tejay van Garderen and more. Each gets to regularly interrupt Hincapie's narrative with some comment or other, usually singing the praises of Big George, the most loyal of loyal lieutenants.

The idea of bringing other voices into an autobiography is something to be applauded. If you want to see it being done well check out Sean Yates's It's All About The Bike, where his ghost, John Deering, had Yates interacting with these guests, thus creating a convivial air of mates reminiscing. Hummer, his approach is colder, there's no interaction between Hincapie and his guests. What Hummer is actually doing is going back to his own broadcast roots: each guest voice reads like that part of a documentary script where you cut to a talking head adding extra colour to the pictures on screen. (One American journalist I turned to with a question about the book actually suggested I try reading the whole book as if it were being delivered to camera, and he was right, it almost works when you do that.)

These two things - the bad ventriloquism and the mishandled guest appearances - make The Loyal Lieutenant a bad read even before we get to the problem of the way doping is handled. And the problem with the way the doping is handled will only add to the frustration many will feel with The Loyal Lieutenant. Toward the end of the book Hummer-Hincapie tells us that he hopes "this book offers not an excuse but a deeper context of why things were done." Specifically with regard to doping, it doesn't. The context offered is that there was a lot of it going on, so Hincapie joined in, simple as that. (What the book does try to offer a deeper context on is why Hincapie testified against Armstrong, and it is that decision - more so than the decision to dope - that has hurt Hincapie's reputation, his reputation for loyalty.)

Once we get beyond the actual doping, Hummer-Hincapie has a lot to say about anti-doping, or Hincapie's role in cleaning the sport up. Essentially, Hummer-Hincapie is telling us that, in 2004, following the birth of his daughter and seeing Tyler Hamilton get busted, Hincapie decided to cut down on his doping, like a smoker dropping from a packet a day to only smoking when out with mates. He then decided to cut it out entirely in 2006 after having to dodge a test in order not to pop a positive. (It should be pointed out here that, like many, Hincapie seems to believe that doping equals EPO and blood bags, he claims he never doped before he took his first shot of EPO, not offering any comment on the documented use of cortisone or other drugs on the Motorola squad before they stepped up to EPO. If Hincapie believes that, then what does he really mean when he says that post 2006 he rode clean? Just that he stopped using EPO and blood bags? Or that he really rode clean?)

Once having made the decision to ride clean, Hummer-Hincapie tells us that he became "like an overeager, newly converted Hare Krishna you'd see at an airport." We're told that he convinced his Disco team-mates to pass on using blood bags during the 2006 Tour. We're told that he talked to other American riders about his decision to quit doping. We're told that he talked to Óscar Pereiro and Alejandro Valverde ... and there you have one of the hidden bombs in the way past dopers today talk about their doping: Pereiro was quick to defend himself when Floyd Landis called him a doper, will anyone ask him for a response to Hincapie's insinuation here? (Chris Horner may also face similar questioning, Hincapie saying Horner believed "he was just lucky he didn't have to testify" in the USADA investigation - as if Horner has anything to hide.)

In terms of reputation management, The Loyal Lieutenant will have to be judged a success. Hummer-Hincapie downplaying the doping and playing up the anti-doping, turning Captain America into a sort of Dark Knight of the professional peloton. We are told time and again what a nice person Hincapie is. We are shown time and again Hincapie laying it all on the line for others, especially so for Mark Cavendish in the Highroad years and Cadel Evans at BMC. And we are constantly reminded that, post 2006, Hincapie was to the fore in ushering cycling into a new, clean, dope-free future, leading by example.

Beyond the doping, what else is there? Well there's that Hincapie really is a wonderful person, the best brother, son, husband, friend, team-mate you could possibly imagine. There's that, sometimes, deals get done in bike racing: the 2006 Ronde van Vlaanderen story which Michael Barry told in Shadows On The Road - that a deal between Discovery Channel's Leif Hoste and Quick Step's Tom Boonen secured the win for Boonen and denied Hincapie a shout at the title - is more or less true, Hummer-Hincapie acknowledging that there was a bit of scripting in the way the outcome was decided. And we get that, beyond the bike, Hincapie and Armstrong weren't really all that close, and spent a lot of time not talking to one and other.

George Hincapie was and remains a hero to loads of cycling fans, particularly Americans. He is for them what Sean Yates was for British fans of an earlier generation. Nothing in The Loyal Lieutenant is going to take away from that, going to diminish Hincapie's popularity. Those who had blind faith in him throughout his career won't care that he has so little to say about doping itself. Nor will they care how ineptly Hummer has handled the task of telling his story. For them, all that matters is the name on the cover of the book. For the rest of us, though, The Loyal Lieutenant is yet another missed chance to properly paint the picture of the Gen-EPO years, to really explain what went on in those years. There's been so many of them at this stage that getting upset about another just seems utterly pointless.