A Clean Break, by Christophe Bassons

The story of a rider squeezed out of the sport for daring to not toe the company line.

Share All sharing options for: A Clean Break, by Christophe Bassons 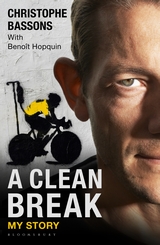 - What are you doing?
- I'm making the race, I'm attacking.
- You know, what you are saying to the journalists is not good for cycling.
- I'm simply saying what I think. I'm saying there is doping.
- If you're here to do that, it would be better for you to go home and find another job.
- I'm not leaving when I've not changed anything; if I have something to say, I will say it.
- Then get the hell out!

During his first season in the pro ranks Bassons met Pierre Chany at a race one day. It was at the Critérium International and Chany actually singled him out, had something he wanted to say to him:

- Christophe, I am proud to meet you. You've got the class of cycling's old school. Watching the way you race I can see something from another age. Continue like that. Try to remain distinctive.

The distinction that Chany saw in Bassons was the way he raced from the front, old school tête de la course style. What Chany didn't know was that Bassons was also doing it à l'eau claire, he was doing it without recourse to drugs. Not just the EPO that was rampant in the professional peloton when Bassons joined its ranks in 1996, but also without corticosteroids. And he was doing it without récup too, none of the then standard recovery products that dripped into your arm through an IV. What all that meant was that, as Bassons progressed and as EPO tightened its grip on the peloton, he was less and less able to ride off the front of the race, he was more and more struggling to hold pace at the back. The sport began to swallow him up.

In 1998, when the Festina affaire exploded, Bassons became distinctive again. He was one of three team-mates that Festina riders said rode clean. It is a sign of how perverse the sport had become at that point, when doped riders were considered commonplace, barely worth raising an eyebrow for, and the few clean riders were distinctive. But that is the way the cycling world was, topsy-turvy. The rider who didn't dope was distinctive.

Come the 1999 Tour and Le Parisien - sister paper to L'Équipe and the founding root of the Amaury empire, owners of the Tour de France - invited Bassons to contribute a daily diary to the paper, which ran with a preamble stating that Bassons was riding clean. This was 1999, this was the Tour of Renewal, and yet here was Le Parisien, part of the organising structure of the Tour, trumpeting one clean rider?

- When it comes to sporting spectacle, the most valuable commodity is being unique, exceptional, original. This is what distinguishes elite sport from mass-participation events. The most highly prized kind of singularity is obviously that of a champion, the winner, the one person seated up on their stratospheric podium. This allows them to amass fortunes. But within a peloton that had damaged public confidence, my originality, which was no longer hidden, also became a valuable commodity. Moreover, the proof of my probity, which had been sealed by the judiciary, offered excellent references from a marketing perspective for those wanting to restore the image of a brand. [...] In early 1999, I was a brand of washing powder: Bassons, with outstanding cleanliness, washes whiter. Guaranteed without chemicals, it works only with l'eau claire.

The Tour of Renewal? The whole thing was a farce, and everyone knew it, even before it got under way. And maybe that's why L'Équipe's sister paper Le Parisien wanted a Simon Pure it could promote. A clean rider, a clean Tour. But saying he was clean was never going to be enough for Bassons. He used the pulpit Le Parisien gave him to say that the sport was not clean, that the Tour was not clean. How this could have come as a surprise to anyone is beyond imagination. Jean-Cyril Robin had said the same thing earlier in the year, as had Cédric Vassuer. Events throughout the early part of the season had demonstrated it. Events at the Giro, surely, proved it?

Ah, but something had changed. The line was now being toed. By all except Bassons. Jean-Cyril Robin had learned to hold his tongue, but not Christophe Bassons. And so Bassons became an embarrassment. The peloton rounded on him: "After a week, hardly anyone would talk to me." And so a vicious cycle was established: the more his peers ignored him, the more Bassons spoke out, and his peers tried to ignore him even more.

On the day the Tour raced toward Alpe d'Huez Bassons decided to meet hostility with hostility. The riders were tired after the stage to Sestriere the day before and wanted to take things easy with the Croix de Fer to come before the Alpe. Bassons decided to make their life hard, by attacking. The attack was, inevitably, chased down. And when the peloton swallowed him up they "peppered me with insults. The invective came in all manner of languages." Only then did the conversation with Armstrong come about.

Bassons survived the next stage, to Saint-Étienne but abandoned before the start of the following stage, to Saint-Flour. Because of what Armstrong said? No, because of what his FDJ team boss Marc Madiot said, and what his team-mates did and did not say, and because of the way his peers in the peloton were treating him. No one man drove Bassons to quit. The sport squeezed him out. Martyred him.

- I am not an orator, nor am I a teacher. I am not a crusader, nor an inquisitor. On the contrary, I feel closer to the Cathars, who lived in my home region during the Middle Ages and were victims of intolerance. These men only wanted to live according to their religious principles. Their moral austerity was unbearable to the Church, which didn't tolerate any divergence. They were massacred.

1999 - and 1998 before it - is at the heart of A Clean Break, which is perhaps a little unfortunate as it means we're over the book's highpoint with still a third of the book to go. The original part of A Clean Break - Positif - is, even with the obvious updates, the best part of the book and the new chapters have a different feel to them. Throughout, Bassons - with whatever assistance is owed to his ghost, Benoît Hopquin and his translator Peter Cossins - is eloquent, but even eloquence is not enough to cover over the cracks which are obvious in the book's final chapters. One of the cracks is that Bassons is offering a relentlessly bleak picture, showing that there are some still involved with French cycling who would like to silence him, saying that when he looks at cycling today he has the impression history is repeating itself, reconciling with Armstrong but with no one else. And then there is that Bassons tries to create a manifesto of sorts from his own views.

Bassons is not simply saying that sport needs to get rid of drugs, he is saying that sport needs to lose the whole 'win at all costs' ethos that underpins it. He does not fall back on the wishy-washy bull of some, claim that it is the taking part that matters. What he believes is that the individual should seek to surpass themselves, not others. So getting faster, month by month or year by year, while actually losing position relative to your peers - being fourth at 20 minutes, then fifth at 15, sixth at 10, seventh at five - is something to be celebrated. It's a nice idea, but - personally - I'm not sure I can buy into it, not for top level sport.

Bleakness and a manifesto you don't fully buy into should not stop you from reading A Clean Break. The eloquence and the introspection of Bassons - particularly in the book's first two thirds - is definitely worth reading. And even though I disagree with those who have sought to beatify Bassons I do think his story is worth knowing, for the lessons it has to offer. For that reason, if you're interested in what happened in the Gen-EPO years - and wonder could it ever happen again - A Clean Break is a book you should read.