The Climb, by Chris Froome

The auobiography of Chris Froome.

Share All sharing options for: The Climb, by Chris Froome 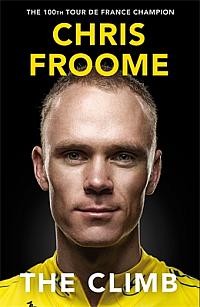 Can you judge a book by its cover? Well, of course you can't, we all know that. But the cover can inform. Consider the cover of The Climb, the first volume of autobiography from the pen of Chris Froome (as interpreted by his ghost, David Walsh). It's his name, the book's name, and a simple portrait photo of the man himself. With, topping it all, this blurb: "The 100th Tour de France Champion." The reason this is important? Because very few know who Chris Froome is. And even those who think they do are probably wrong. The Climb is Froome's first real opportunity to tell the world who he is, where he's come from and how he clawed his way up to the pinnacle of our sport.

Who, then, is Chris Froome? We could look at his palmarès and see what that tells us who Chris Froome, the cyclist, is:

Numbers, eh? They don't really tell you a lot unless you know their backstory. The main backstory of those numbers is that for his first season in the professional ranks (2007) Froome was riding for the Konica - Minolta team (and also for the UCI WCC squad) and then spent two years with the pro-continteal Barloworld outfit before joining Sky in 2010. The first couple of years with Sky he was simply riding as an équipier, a domestique whose job was to break wind and pass water for others.

What is there to know of Froome the man? Two things he wants you take away from The Climb are that he is meek ('Blessed are the meek' is a refrain repeated throughout the book) but also has a steely determination (is there a top level professional athlete who doesn't?). That steely determination, it's mostly been expressed privately, behind closed doors or on mammoth solo training rides. Froome, he loves his mammoth solo training rides:

"I can feel today that all this isn't necessarily that healthy for me. I don't think it's good for my body to push this hard, and this often. It can't be good in terms of health and longevity; I'm sure that the aggregate of all these marginal debts will have to be paid off the body sometime down the road. I know for now though that this is what is going to make me strong, fitter and tougher. It's what I need to do to be a racer, and what I need to do to be at the front of the next race."

Much of the basic biographical information is already well-trodden, covered in David Sharp's biography Va Va Froome and in all the media profiles you'll ever see or read of the Kenyan-born British Tour champ. Is the fact that Froome is (like several recent Tour champions from Bjarne Riis through Lance Armstrong, Cadel Evans and Bradley Wiggins) the product of a broken home (his parents divorced when he was young) significant? Or is there significance to be found in the fact that Froome is the youngest of three brothers, with seven and nine years separating him from his older siblings? How about Froome's dyslexia? All of these factors are certainly formative but it is left to the reader to decide their significance.

One anecdote from the book has been taken as being significant by others: some time after his two brothers were sent to England to complete their education at Rugby Froome had as pets two pythons. Initially he was able to feed them on mice, but as they grew in size so too did their dietary demands. Rats trapped in the wild became their new food source. As did baby rabbits stolen from a kindergarden near where Froome lived. The significance drawn from this is that any boy who can feed rabbits - cute, cuddly little rabbits - to his pet pythons must have a dangerous edge to him. (Did the model working-class cyclists of old have a dangerous edge because they had seen animals raised on the farm sent to slaughter or hunted with their father for food to put on the table? Or do you have to be a quiet, middle-class kid for such things to suggest danger?)

If you wish to draw significance from Froome's pets, then perhaps you would be better looking at those pets themselves and the manner in which they kill their prey: they don't strike hard and fast like a cobra, they slowly squeeze the life out of it. Which, if you stop and think about it, is exactly how Froome wins his races: by slowly squeezing the life out of his opponents. Maybe Python would make a good nickname for Froome? Perhaps not, for when you consider Froome's propensity for falling off (from Salzburg in 2007, through the back of a commissaire's car in Paris-Roubaix in 2008, past the flowerbed in Romandie in 2010 and on through a pedestrian in Switzerland in 2012 and past the neutral zone spill in Corsica in 2013 before getting to his Dauphiné and Tour spills in 2014) and his ability to do stupid things (riding the 2012 Tour prologue with cotton-wool up his nose, trying to drive a car with bikes on the roof into an underground carpark, etc) you know that Python would end up being preceded by Monty.

For me - having already suffered through Va Va Froome - the one true revelation from The Climb is that Froome has the mentality of an old school grimpeur. Forget the flash and panache of those crazy Italian mountain goats like Claudio Chiapaucci or Marco Pantani. I'm talking guys like Luis Ocaña and Charly Gaul, guys who we think of as climbing not for applause but as a way of exorcising some inner demon, climbers who could also translate their climbing ability into time trialling talent. (At one point Froome compares himself to that great French mountain goat René Vietto - Wiggins must be his Antonin Magne, Richie Porte he sees as his Apo Lazaridès - but the comparison is somewhat false, for Vietto sucked royally when racing against the clock.)

"I wanted to know what my potential was. I wanted to go as hard as I could in the mountains until I blew! I wanted to expend all my energy and have to crawl to the finish line one day. I wanted days when, instead of standing, I would have to sit down in the shower."

While The Climb does offer insight into Froome's mentality the more interesting parts of it are the insights Froome offers into Team Sky. The picture that emerges of Dave Brailsford is not particularly flattering, most of it centring on 2011 contract negotiations and the fact that Froome believes Brailsford committed to allowing him a tilt at the 2012 Tour only to renege on that commitment. (As well as that, I'm not sure Brailsford will appreciate Froome pointing out to the world that the Sky boss has a tell: "When he is worried his eyes get bigger than normal.")

Of Sky's Great Purge in 2012, Froome says it was "part of their ongoing zero-tolerance policy towards doping" and notes that Bobby Julich (Froome's personal coach within the Sky set-up) confessed his use of EPO because "he feared it would come out sooner or later and the damage would be bigger." There is just one thing missing from the picture Froome paints: its context, the fact that the Great Purge and Julich's confession were a result of the USADA Report, the fact that it was reactive, not (as painted by Froome) proactive.

Armstrong does merit a mention. Like his ghost (Walsh) Froome seems to believe that Sky's detractors all come from the same group: "I know that to a certain constituency, those hurt most by the Lance Armstrong business, there is no point in explaining what makes Sky different. They say they have heard it all before and they won't get fooled again." Armstrong, though, is not the alpha and omega of doping, the beginning and end of doubt and the sole reason some people choose to ask questions. It is not because of Armstrong that people question Sky's commitment to the ideals the team's management and riders espouse.

Doping - or Froome's lack of it - obviously features heavily in The Climb. Froome credits his mother with gifting him a moral compass that will always steer him clear of cycling's Dark Side:

"With Mum I don't remember ever being told, 'You can't do that,' or 'These are the rules.' She didn't believe that rules existed merely to be followed. 'Do it if you want to,' she'd say, 'and you can find out for yourself what it's like, what the cost is.' I really loved that philosophy, I still do. She made me think about how stupid it would be to do certain things, about how actions would hurt other people or hurt myself or betray the things I believed in. It was a sensible philosophy. Obeying rules just because they are rules isn't the same as having your own moral compass. Mum knew that character is what you do when nobody is watching. Mum instilled a sense of responsibility and good morals in me that I live by to this day, and I know that diverting from these would be a betrayal of her. Cheating would not be an option for me."

This story, it should be noted, is preceded by an anecdote in which Froome is tossed off a race in the Netherlands for riding on a roped-off cycle path when the actual race route took the rest of the peloton across a pavé sector. And is followed by his disqualification from the 2010 Giro d'Italia for hanging on to a motorbike. And followed later still by that illegal feed Froome indulged in while ascending Alpe d'Huez in the 2013 Tour. Clearly, there are rules and there are rules, there is cheating and there is cheating. Somewhat ironically, Froome then goes on to comment on Brailsford's use of language (during their 2011 contract negotiations), likening him to a character in Through the Looking Glass: "When I use a word, it means just what I choose it to mean - neither more nor less."

Talking of the way some fans react to him - the booing and the spitting he finds aimed in his direction on the road in some races - and talking of the way he has to field doping questions from the media, Froome has this to say:

"I'm clean. To be honest, I struggle to see how I could be any cleaner. I want a clean sport. I want us to be open and honest about what has happened in the past and I want the technology that proves I am clean."

Some weeks after The Climb was published, following his use of an asthma inhaler having been noticed in the TV transmissions of the Critérium du Dauphiné, Froome had to be open and honest about what is happening in the present and his use of asthma medicines, something he had overlooked throughout The Climb (where his regular coughing fits were mentioned and many other ailments were openly discussed but asthma never reared its head). Then, after that, a French newspaper - Le Journal du Dimanche - got word that Froome had raced, and won, the Tour du Romandie on a TUE for the corticosteroid prednisolone, the use of which would have required Froome withdrawing from racing had Sky been one of the eleven World Tour teams signed up to the MPCC's code of ethics. Sky, as a team, like to use failure as a learning experience and it is to be hoped that both these incidents will have been learning experiences for Froome, and he will realise that openness and honesty should not be restricted to the past, it must also be applied to the present.