Two Days In Yorkshire, by Peter Cossins and Andrew Denton

A photographic record of the Tour de France's Yorkshire start.

Share All sharing options for: Two Days In Yorkshire, by Peter Cossins and Andrew Denton 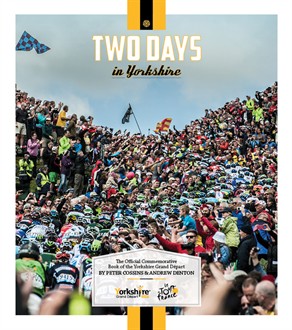 One of the good things about the current resurgence of cycling in the UK is that we are getting back to a point where some books are appearing in a timely fashion, we're not just getting old history told afresh. If you go back to the Foreign Legion era (1980s into the 1990s), there was (briefly) a season round-up annual, there were Sam Abt's books, there were the books that came out following Stephen Roche's treble. Cycling publishing wasn't just about history. Gradually we are returning to that. We've had Argyle Armada. We've had the various Sky-produced Giro and Tour annuals. We've got Balint Hamvas's 'cross annuals. We've had the likes of Bradley Wiggins's On Tour and David Walsh's Inside Team Sky. And now, barely two months after it happened, we have Two Days in Yorkshire,

Seven years after last starting in the UK, ASO once again decided to go west for the start of the 2014 Tour de France, opting for Yorkshire over Spain (who for a time didn't even look like they could afford to run the World Championships), Italy and - British Cycling's preferred home bidder - Scotland. Two years after Bradley Wiggins became the first Briton to reach Paris in yellow and a year after Sky made Chris Froome the second, ASO was able to honour Brian Robinson, Britain's first Tour stage winner and also honour Britain's most prolific stage-bagger Mark Cavendish (whose family has roots in the People's Republic). Being able to get the Tour to the UK so quickly after the successes of Wiggins and Froome was a bit of a coup for ASO, although the Tour has in the past been able to demonstrate alacrity in cashing in on successful riders, such as starting the 1969 race - in which Eddy Merckx made his début - in Belgium and having it pass through the Cannibal's home town. (In the future, look to seeing ASO attempting to cash in on the rise of talent like Marcel Kittel and John Degenkolb by returning to a Germany that may be getting over its disenchantment with cycling for a grand départ for the first time since 1987.) 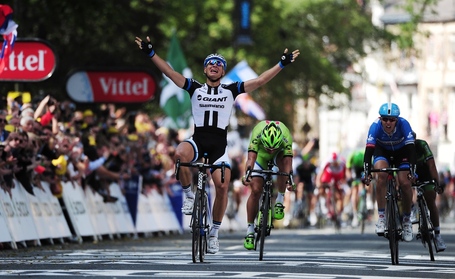 Marcel Kittel sprints to victory in the Tour's opening stage

As well as telling the story of those two days in Yorkshire, Cossins and Denton also tell the story of what led up to them, starting with a brief history of the Tour that focuses on Great Britain's participation and the race's international départs and utilises some marvellous colour photographs from the archives, particularly one of Brian Robinson in 1955 in his red Hercules jersey. From there we move on to an account - from Denton, who was Head of Media for the Yorkshire Grand Départ - of how Yorkshire became the Tour's twentieth international grand départ and Leeds the eighteenth city to host the Tour's start. Being an in-house product - though published by PAVÉ Two Days in Yorkshire carries the imprimatur of Yorkshire Grand Départ 2014 and Le Tour de France - this account doesn't consider the big issues, such as the actual cost of hosting the Tour, or whether the promised TV audience of billions ever actually materialised. Actually, it's all rather a lot of back-slapping and - let's be honest here - about as interesting as all the tax treaty stuff in the second round of the Star Wars movies (in other words, there's an audience for it, but it ain't me). But if you're paying the piper, I guess you get to choose what tunes gets played. 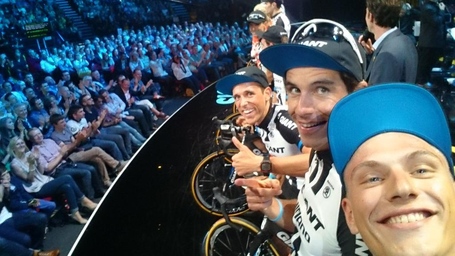 A Kittel-selfie no one complained about

That out of the way we are into the second third of the book, and the real meat and two veg of Two Days in Yorkshire - the two stages the Tour raced in God's Own Country. The story of which is told in photos. Photos - the thick end of 200 of them - which are the real reason you'll want to own a copy of this enjoyable little book.

Two months ahead of the Tour's UK grand départ British Cycling fans had had an opportunity to experience the Giro d'Italia's first UK grande partenza, with the corsa rosa turning Northern Ireland pink for the weeks leading up to the race. But while the Giro met with typically Irish weather - in Ireland the ice bucket challenge is simply called leaving the house - the sun shone on the Tour in Yorkshire, showing the yellow sheep in their best light and helping to bring out the crowds. And the crowds are probably the biggest thing in all the photographs included in Two Days in Yorkshire. 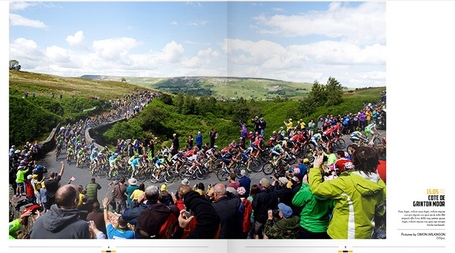 Out of the villages and towns, on the flat roads between habitations and hills, the fans may have been few and far between - the million and whatever who watched the race pass each day chose their vantage points carefully - but in those locales the greenery really takes over. There are, though, only a couple of such images, and most of the story told in Two Days in Yorkshire is of the crowds that came out, packing towns and hills.

The single, iconic photo of the Tour's two days in Yorkshire is of the peloton snaking over the crest of Buttertubs, the whole picture a kaleidoscope of colour, the peloton lost among the crowds which squeeze in from either side of the image. It's an image that takes the viewer back to the another era, when French victories were not rarer than hens' teeth and the home crowds would flock to Alpine and Pyrenean summits in vast numbers, whatever the weather. 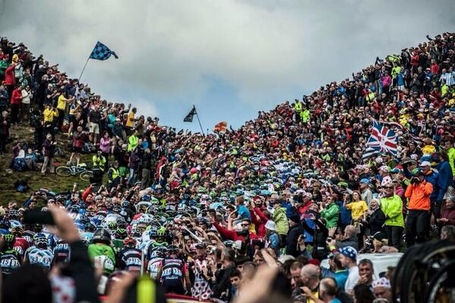 The sporting side of the story of the Tour's two days in Yorkshire is reduced to a couple of pages. This is sport as spectacle, the Tour's two English étapes done as events. Nor is there a follow up of what happened after Yorkshire, what impact those two days had on the race overall. This is a celebration of two days in which a million people each day stood on roadsides to watch a couple of hundred cyclists - and their sprawling entourage - whizz past in a blur of colour. 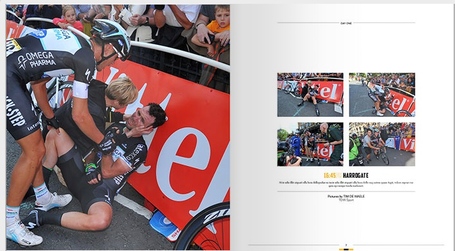 While the fans looking for the story of the race may be left disappointed, photography fans will appreciate a few pages given over to the shutterbugs, with James Maloney, Shaun Flannery, Garreth Copley, Tim de Waele and Jered and Ashley Gruber giving their take on their two days covering the Tour. 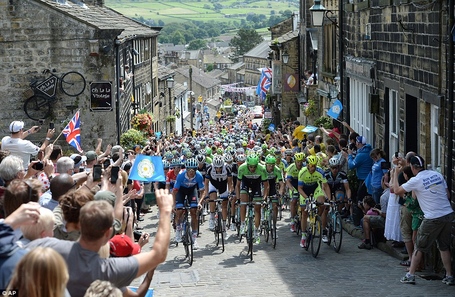 Two Days in Yorkshire makes for a great memento for any of the million or so fans who lined the roads on either or both of those two days in the People's Republic, or for the several hundred thousand in the UK who watched on TV, as well as for those looking for a slightly different way of looking at the first two days of what was a very, very eventful race. This is a book very much for them, very much about them, a celebration of the warmth with which the British fans greeted the Tour in 2014. 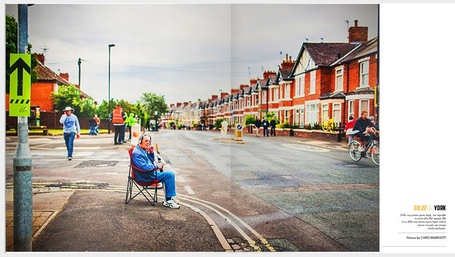 Staking out a spot early