Is the bicycle capable of saving the American economy?

Share All sharing options for: Bikenomics, by Elly Blue 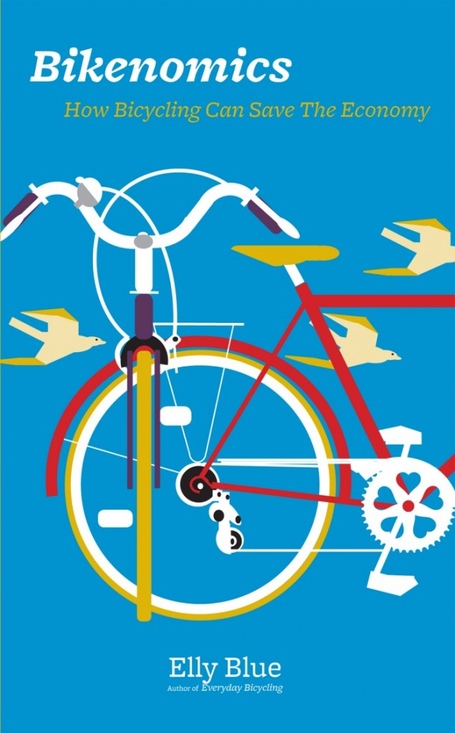 Title: Bikenomics - How Bicycling Can Save The Economy
Author: Elly Blue
Publisher: Microcosm Publishing
Year: 2013
Pages: 191
Order: MicrocosmPublishing.com
What it is: An attempt to make an economic argument in favour of cycling
Strengths: Blue's passion for her subject is hard to deny
Weaknesses: A little bit of economic rigour would have gone down a treat, instead of simply accepting figures at face value

In 2011, Sarah Noga, her husband and their three children moved from Alaska to rural Washington and the farming town of Arlington. Back in Alaska they had been a two-car family, but in Arlington they figured they could get away with one. This left them with an immediate saving of $621 every month in motoring costs. While shopping in a department store one day Noga had an epiphany when she turned down to bicycle aisle: "I looked at the members of my family, five strong, and then back at the bikes. There was a glimmer there, a playfulness waiting to be explored." For the princely sum of $735 she equipped the whole family with wheels and helmets. Once they started cycling, they found themselves using their one remaining car less and less, and eventually sold it.

Noga's is just one of the anecdotes related by Elly Blue in Bikenomics, an attempt to make the argument that cycling can save the American economy. The somewhat fashionable -nomics suffix in the title might lead you to think you're in for a headache-inducing dose of the dismal science, a bit of backwardation here, a drop of disequilibrium there, all served with a soupçon of sticky prices on top. But really, like with Steven Levitt and Stephen Dubner's Freakonomics franchise, Blue is more interested in sociology than economics. As with Levitt and Dubner, the economics is there - in Blue's case through an abundance of statistics - but really Bikenomics is an argument from the heart, made with lots of anecdotal evidence, much of it drawn from Blue's own life, all served with a passionate belief that not only is the current transport model doomed but that cycling is the best alternative to it.

Cyclists around the world face many of the same criticisms whenever they try to advocate for the inclusion of cycling in transport plans. The most common criticism is the hoary old perennial that motorists pay for the roads and cyclists free-load on them. Blue responds to that:

"What if I told you that by driving a car you become a freeloader, a drain on the economy? That people who bicycle instead are subsidising a road system that they are largely not welcome on? [...] Cars pay for about half the cost of our roads, all told. That's it. Half. So where does the rest of the road funding come from for all that asphalt? We all pay it - whether we drive or not."

Another is that cyclists actually make roads more dangerous:

As well as rebutting common complaints about cyclists, and using anecdotal evidence to show why cycling can be a good lifestyle choice, Blue considers some of the places in the US where cycling is being accepted as a viable transport choice, such as Portland, where she herself lives. In considering these, though, Blue acknowledges some of the problems with the way cycling is currently being embraced, particularly the manner in which it by-passes those at the lower end of the economic scale, particularly in the manner in which cycling infrastructure tends to go into areas that are being gentrified.

Generally, Blue is talking as one activist to others who are already willing to buy into cycling as a lifestyle choice, arming them with the arguments needed to make the pro-cycling case. Is Bikenomics likely to convince many motorists to reduce their reliance on their car, let alone forsake it totally? There I have my doubts. As with many pro-cycling activists, a lot of what Blue writes comes across as being anti-car, which in my experience is never a good starting point with motorists. And - for me at least - there is also a problem with the way Blue uses statistics to bolster her case. Rather than making a sound economic argument in favour of cycling - using the math to fulfil the promise of Bikenomics's sub-title and show how bicycling can save the economy - Blue seems to just cherry-pick numbers and throw them out there, without questioning their veracity.

One good example of this is the issue of just how much it actually costs to be a cyclist. The American Automobile Association produces an annual report telling members - and the media - just how much it costs to be a motorist in America today, a number that clocks in just shy of $9,000 (the poverty line in the US, Blue tells us, is set at $10,380, while someone working full-time at the federal minimum wage, we're told, would earn $15,000). Before we go any further, I think we can all agree that cycling is going to be an awful lot cheaper than $9,000 per annum, and would certainly offer those in the $10-$15,000 earnings bracket a major cost saving when compared to motoring. We don't need numbers to know this, we just know, it's that obvious. But if we are going to use numbers to prove this, I think we should get them right.

So just how much below the $9,000 annual cost of a car is the cost of a bike? Well one much cited figure (it can be found in the endnotes of Bikenomics) tells us that it is $308 a year. Regrettably, this is incorrect. For a start, the survey from which it is taken - A Survey of North American Bicycle Users, by William E Moritz at the University of Washington - was conducted in 1997. There are people today citing this $308 number who weren't even born in 1997. Secondly, Moritz himself noted that his study was "not a statistical or random sample of BCs [bicycle commuters]": while the study did have 2,374 valid respondents, the population was self-selecting and not very diverse due to the manner in which Moritz called for responses. Thirdly, the figure Moritz actually gave was not the $308 so many cite so often.

The circa-$300 figure, though, does have backing from others. Well, one other, cited by Blue in the text of Bikenomics, Todd Litman of the Canadian think-tank the Victoria Transport Policy Institute. Litman guesses a cost of $500 to $1,000 for the price of a bike, which is then assumed will last 10 years, and so only works out at $50 to $100 a year. He then adds another $50 to $200 a year in expenses - guesstimated at 5¢ to 15¢ per mile, with an estimate of 2,000 miles per year per rider (the car figure is based on 15,000 miles) - bringing the total for guess heaped upon estimate heaped upon number plucked out of thin air to $100 to $300.

There are those who might question Litman's numbers. Such as James D Schwartz (who I stumbled upon in the five minutes of Googling it took to find Moritz's study). Like Litman, Schwartz just plucked some numbers out of thin air, but the problem for some cycling activists is there's a wee bit more fat on Schwartz's numbers than on Litman's. Or, for that matter, Moritz's. Schwartz put the cost of a bike at $1,500 and gave it a life of five years, with no resale value at the end of that. That's a cost of $300 per year to begin with. Schwartz then added in $50 a year to run that bike, a number simply plucked out of the ether. Where Schwartz's number gets most interesting, though, is when you follow it down a rabbit hole introduced by Lloyd Alter: how much does it cost to actually fuel that bicycle? Alter takes a figure from Canadian cycle couriers, who are allowed claim $17 a day in food as a deductible and, based on an eight hour day, gives that as an hourly fuel cost of $2.125. From Moritz's (1997) survey Alter gets an average commute time of 26.4 minutes, or 52.8 minutes per day. Which, based on a 252-day working year, gives an annual fuel cost of $471.24. Bringing Schwartz's $350 figure up to $821.24.

Compared with the near $9,000 it costs to run a car every year, you might argue that there is no real difference between a figure of $300 and $821.24 as being the cost of riding a bike for 12 months. And, for sure, $500 between friends, it's not really an awful lot. But for me this highlights a major problem when it comes to considering the economics of cycling: an awful, awful, awful lot of it is totally bogus, numbers plucked out of thin air and then passed from one activist to another until repetition gives them the status of fact, no matter how fantastical they are.

Some may disagree with the math on this, and argue that the food figure introduced by Alter is the one that's bogus, not the the earlier $300. But even Blue acknowledges, in passing, that it has some basis in reality. In that Noga case study mentioned at the opening of this piece - a family of five that swapped cars for bikes - Blue notes the following:

"Their one major unexpected expense? Food. 'We do eat a lot more when we bike," she [Sarah Noga] said. "I usually treat my kids to Mexican vegan food when we make our big grocery trip by bike. The giant burritos may  cost more than we would have burned in fuel but I love eating a bunch of calories guilt-free...so count it as a bargain.' Compared with the $20,000 annual savings of no longer owning their two cars, it is a bargain indeed."

And here we again return to the fact that the difference between $300 and $800 is not that important, especially when you consider the number it's being compared to. But even the high-end Schwartz-Alter figure is low-balling reality. As well as plucking numbers out of thin air and relying on Moritz's 1997 study, it, for instance, makes no consideration of the additional transport costs incurred when you simply can't use your bike to commute: such as when it's pissing rain, you've got a sore knee and simply have to be somewhere and so splash the cash on a taxi. Or any of the other additional costs that pile upon you for being a cyclist.

Now don't get me wrong here, my gut instinct will always be that being a cyclist is going to be cheaper - and better for you - than being a motorist. But if we're going to make economic arguments in favour of one over the other, don't you think we should at least attempt to get the figures right and not rely on an argument that is more emotion than economics?

(As an aside, I should point out that since the birth of the bicycle people have been making the economic argument based a detailed accounting of the cost of alternatives and a very imprecise accounting of the actual cost of being a cyclist, and if you want evidence of that see the review of FJ Erskine's Lady Cycling.)

This lack of economic rigour - I offer one example but could offer more - means that Bikenomics fails at proving the case for cycling as the saviour of the American economy. But taken at a less ambitious level - as encouragement for those considering adopting cycling as a transport alternative and lifestyle choice - Blue does have much to say that is worth listening to.