Win The Race Against The Stasi

It's competition time again on the Café Bookshelf and this time you get a chance to win the latest book from Herbie Sykes, The Race Against the Stasi.

Share All sharing options for: Win The Race Against The Stasi 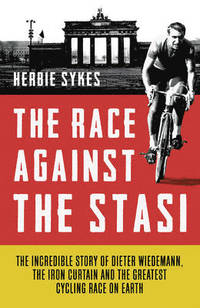 A couple of years ago Herbie Sykes emailed me one day to tell me about a book he had come across and which I might be interested in, Uwe Johhnson's The Third Book About Achim. He had come across it while researching the subject of cycling in the former East Germany, when looking at the story of the Peace Race. One fruit of Sykes's labours has now been published in book form and here on the Café Bookshelf we're giving you a chance to win a copy of it for yourself.

The Race Against The Stasi tells the story of Dieter Wiedemann, the Iron Curtain and the greatest cycling race on earth: the Peace Race.

"The Peace Race was an oasis, and through it we were able to dream. It was about different peoples, from different countries, crossing borders and coming together. It was about genuine fellowship, and that was its beauty and virtue. For two weeks a year it offered us a window on worlds we were denied access to. It was a huge paradox, obviously, but for me it remains something beautiful. It was the race of peace."

As a podium finisher in the Peace Race Dieter Wiedemann was a pin-up for the supremacy of socialism over capitalism. Unfortunately, he fell in love with someone from the other side of the Berlin Wall. In 1964, he defected to the West. In the years that followed, he got to ride the Tour de France while the Stasi sought to repatriate him. Fifty years after that defection, twenty-five years after the fall of the Wall. Wiedemann decided to tell his story, to Sykes.

The Race Against The Stasi mixes Wiedemann's testimony with newspaper reports, interviews with others and the contents of Wiedemann's Stasi file to produce something that - like Johnson's Third Book About Achim - is more than a story about cycling and one cyclist.

To win a copy of The Race Against The Stasi simply answer this question: Dieter Wiedemann finished third in the Peace Race in which of the following years: 1964, 1965 or 1966?

You can find reviews of Herbie Sykes previous books - The Eagle of the Canavesse, Maglia Rosa and Coppi - on the Café Bookshelf, along with a couple of interviews with the author.