P Is For Peloton, by Suze Clemitson and Mark Fairhurst

Share All sharing options for: P Is For Peloton, by Suze Clemitson and Mark Fairhurst 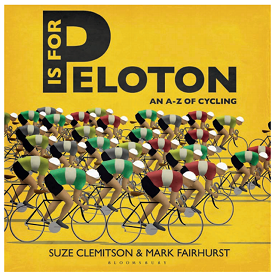 Title: P Is For Peloton - The A-Z of Cycling
Author: Suze Clemitson (words) and Mark Fairhurst (images), with an introduction by Dave Brailsford
Publisher: Bloomsbury
Year: 2015
Pages: 160
Order: Bloomsbury UK | US
What it is: An illustrated cycling lexicon
Strengths: Stylishly produced
Weaknesses: Why is Chris Hoy Chris Hoy and Eddy Merckx Eddy Merckx while Bradley Wiggins is Sir Bradley Wiggins - is Sir Bradley more deserving of his honorific than Sir Chris or the Baron Merckx? Or why is it the Giro di Lombardia but the Tour of Flanders? (Actually, why is it the Giro di Lombardia and not Il Lombardia)? And why is Henri Desgrange Desgranges?

Ordering things A to Z can be a real treat. Think of things like Morecambe and Wise singing "A: you're adorable. B: you're so beautiful. C: you're a cutie full of charms..." or the Jacksons singing "A, B, C, it's as easy as 1, 2, 3, as simple as do, re, mi...". Ok, so they're earworms that'll bore into your brain and you'll still be hearing them in your head even before you go to sleep tonight, but that just proves their effectiveness. They're simple. They're elegant. They're unforgettable. Just like A B C. But what about D E F, does anyone ever remember D E F? Or M N O? Or U V W? Isn't everything after A B C - with maybe the exception of X Y Z - instantly forgotten? Everything between A B C and X Y Z, surely that's just a waste of time and space if it's not going to be remembered? 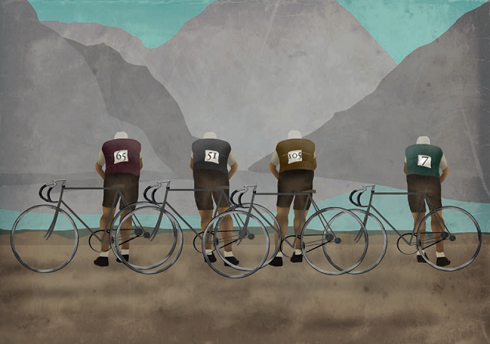 True as this may be, it has never stopped the publishing industry ordering things and putting out new A to Z books. Enter, stage right, P Is For Peloton from Suze Clemitson and Mark Fairhurst, which is (I think) the third cycling A to Z to be added to the Café Bookshelf, following John Deering's How To Be A Cyclist and William Fotheringham's Cyclopedia. Like Fotheringham's Cyclopedia before it P Is For Peloton is a cycling dictionary, of words, phrases and biographies. Abandon. Départ. Hors Délai. Bernard Hinault. Eddy Merckx. Marco Pantani. Gavia. Mortirolo. Stelvio. It's a hodge-podge collection that points out things you might want to learn more about or sums up things you're already well aware of. Think of it as being a bit like having Wikipedia in your pocket. Although you'd need a pretty big pocket to fit P Is For Peloton into. 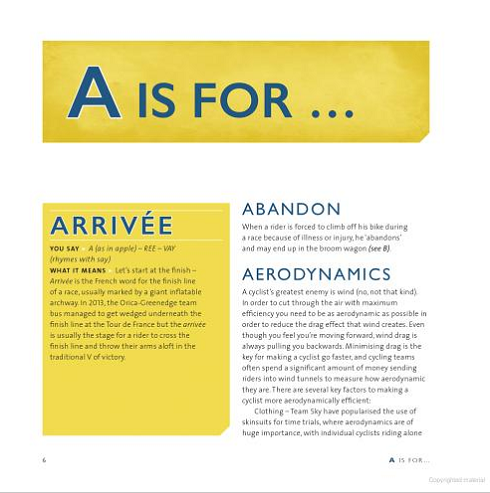 You'll also need a pretty big stocking, as stocking filler fare is really what P Is For Peloton is meant to be. Bearing that in mind, it's hard to justify being bothered by the lack of ambition in the book's contents, to give a toss that - by and large - Clemitson allows myth to take precedence over reality and that stories deserving of a critical eye instead get the unquestioning, rose tinted spectacles approach. Consider, if you will, two women who merit entries in P Is For Peloton: Alfonsina Strada and Marie Marvingt. 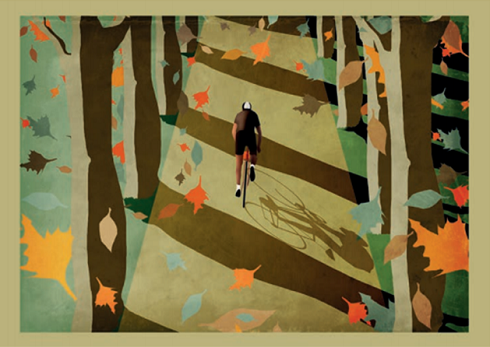 Strada, famously, started the 1924 Giro d'Italia. Rather than acknowledging that Strada was riding at the invitation of the organising journal, La Gazzetta dello Sport, as a way of compensating for the absence of star riders sitting the race out in a dispute over revenue sharing, P Is For Peloton opts to repeat the well worn - threadbare - line that Strada sneaked into the race under a man's name. 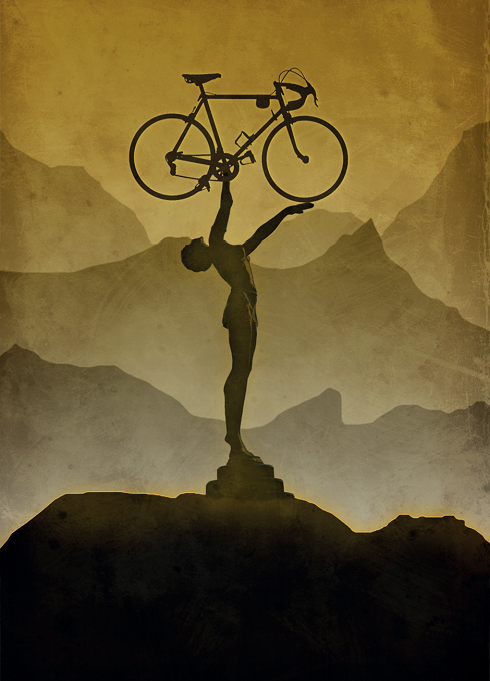 Less well known than Strada is Marvingt who - like pioneering cyclist Hélène Dutrieu (who, among other things, set paced Hour records in the 1890s) - was an aviation pioneer (she started off in balloons, moved on to planes and by the end of her life had graduated to helicopters). As well as her aeronautical pursuits, Marvingt was accomplished in many sports: swimming, shooting, bobsledding and other winter sports etc. The extensive list encompassed by etc includes cycling, Marvingt reportedly having ridden from her home in Nancy to Bordeaux in 1904, Milan in 1905 and Toulouse in 1906. But it is her reputed attempt to ride the Tour de France for which Marvingt is most remembered in cycling circles. Here's some of what P Is For Peloton has to say on this subject:

"In 1908, 110 men stood on the start line of the Tour de France in Paris. Twenty-seven days later, only 36 men finished the race ... and one woman - Marie Marvingt, danger's sweeetheart [...] she set off shortly after the men and rode the same 14-stage 4488 km route including the climbs of the Ballon d'Alsace, the Col de Porte and the Côte de Laffrey."

Remarkably, little is known about Marvingt's Tour. Though the story is much repeated - and much embellished with each telling, some claiming authoritatively that she set off each day just 15 minutes after the men, others that her cumulative time would have meant she finished second overall - finding a contemporary source for this story has proven difficult, to say the least. What does seem increasingly likely, though, is that as with Tim Moore's attempt to shadow ride the Tour in 2000 there was - contrary to what P Is For Peloton suggests - a gap of several weeks between Marvingt's exploit and the actual race. Further, as with Moore in 2000, there must also be a question mark over whether or not Marvingt stuck strictly to the Tour's course, covering every single metre of the official route, or abided by all of the race's draconian rules. Perhaps - at least until the facts are established - it is time we all stopped claiming Marvingt was the first woman to ride the Tour? Or perhaps we should just start claiming that Moore was the first to finish the 2000 edition of the race? 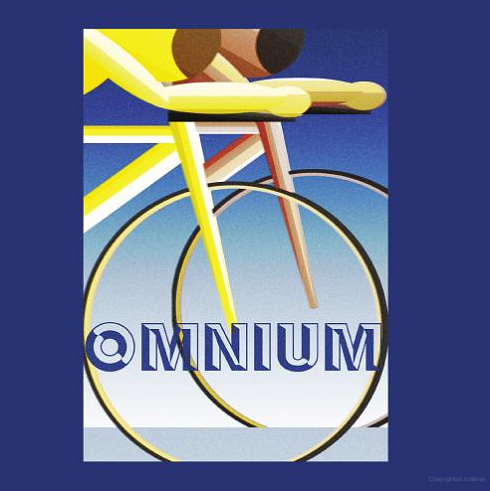 Of course, the real reason it's hard to be bothered by P Is For Peloton simply flogging myths is that the book isn't really about the words - as with Fotheringham's Cyclopedia I don't see this coming down off my bookshelf once it goes on it - it's about the pictures they come with, the book's 160 pages coming with 70 illustrations from Fairhurst, whose faux Deco style has found fans in Team Sky (which, to my mind, is appropriate, Fairhurst's art more often than not striking me as being cold and soulless, but that's just me and I don't expect anyone to share my tastes in art, or opinions on Sky). 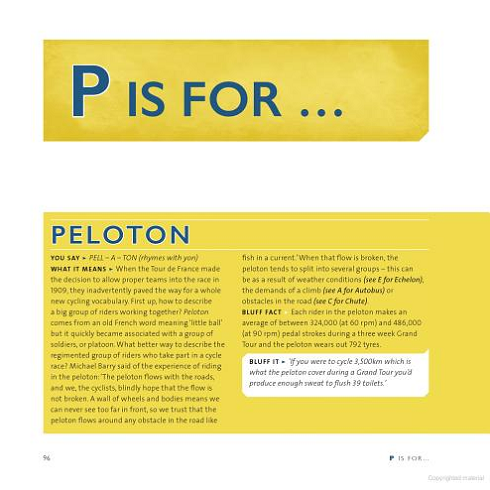 In the same way that Ed Ruscha found a celebrity booster in Lance Armstrong, two time Tour winner Chris Froome has become Fairhurst's most famous fan, his art adorning the endpapers of The Climb. And Froome's boss Dave Brailsford continues his career as a pen for hire by cycling writers - blurbs, puffs and intros, all available at bargain basement prices - by serving up an introduction to P Is For Peloton that can serve as the last word here:

"The beauty of cycling is that it knows no barriers. It's classless. [...] It inspires. Mark Fairhurst's art carries that inspiration. Humorous, thought provoking, encouraging; his work in this book is a joy to see and have." 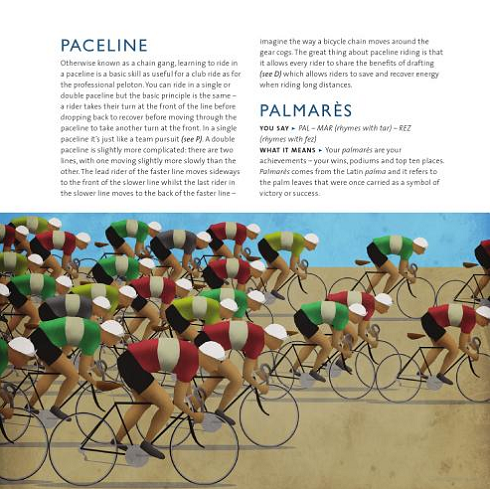