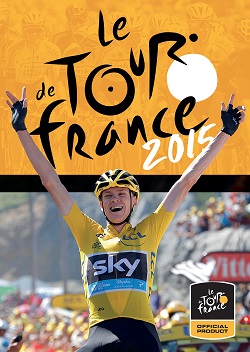 Once upon a long time ago, every year used to see a new (English-language) book about the most recent edition of the Tour de France. Back in the bye-gone days between the years of the Pioneers and the years of the Foreign Legion, these tended to be put out by Kennedy Brothers, small volumes that told the story of the Tour in words and pictures. Then came the years when it fell to Sam Abt to annually tell you the story of the race. Through the Lance Armstrong era, it was John Wilcockson who picked up the torch. In between there had been occasional offerings from the likes of Geoffrey Nicholson, David Walsh, Jeremy Whittle and others but, by and large, if you wanted someone you could count on, year in, year out, it fell to the Kennedys, Abt and Wilcockson. And then...and then it stopped. There was the briefest of revivals in 2012, with a bazillion books being put out telling the story of Bradley Wiggins's win, from the official Sky book to some e-published efforts that didn't even have the saving grace of being able to be used as toilet paper. But that flurry of fresh Tour annuals was short lived as a summer fly. Now, though, there is a glimmer of hope on the horizon, with Vision Sports Publishing (who previously brought us the Bjarne Riis autobiography) picking up the official ASO-produced Tour de France annual and making it available in English.

Written by Christian-Louis Éclimont - who has previously written about the Tour's chansons - Le Tour de France 2015 comes with the same production values we've come to expect of histories of the Tour such as those produced by Serge Laget for ASO, the book heavily weighted toward images, with each stage getting a page of text and three to five pages of images, with occasional interludes adding the perspective of history to the tale. Each stage comes with the day's profile, lists of the first fifteen riders on the stage and general classification as well as average speed for the stage, details of what riders abandoned on each stage, and the holders of the various jerseys. 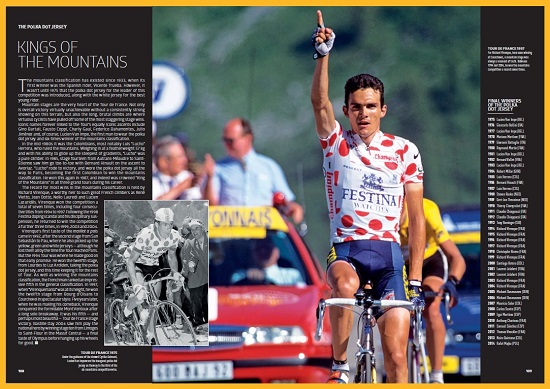 With the perspective of history, most everything can be forgiven, in time.

For Christian Prudhomme - who provides an introductory chapter - the 2015 Tour showed the many sides of Sky's Chris Froome:

"an anxious Froome who mounted his bike before the pavé stage to Cambrai; a slightly miffed Froome in Plumelec, where Sky had victory snatched from them by BMC by one second; a domineering Froome at La Pierre-Saint-Martin, where his show of strength stunned his rivals, yet didn't smother them; a focussed Froome who crossed the south of France; and finally a relieved Froome following an Alpine campaign marked by the clear erosion of his resources, despite his heading the general classification." 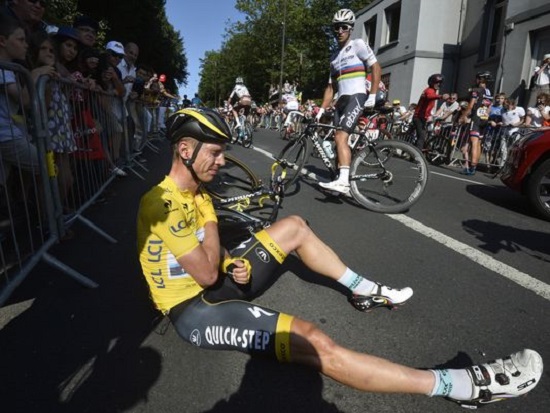 Tony Martin, the latest victim of the Curse of the Yellow Jersey

The 2015 Tour opened with an incident packed first week. Daniel Teklehaimanot (MTN) started the whole thing off, the Eritrean national champion the first rider to speed down the starting ramp for the Utrecht time trial (it was marginally too long to be called a prologue), which Rohan Dennis (BMC) won, restoring the link between the Tour and the Hour and setting a new top speed for a Tour TT (55.446 kph, bettering Chris Boardman's 55.152 kph set in 1994). There was the Zeeland raid on stage two, which saw Tinkoff and Etixx deliver a coup de bordure once the wind turned cross, ripping the peloton apart and consigning two of the four pre-race favourites - Vincenzo Nibali (Astana) and Nairo Quintana (Movistar) - to the rear echelons, along with French hopeful Thibaut Pinot (FDJ). There was the twenty-minute neutralisation of the race on stage three, where Fabian Cancellara's (brief) reign in the yellow jersey was cut short by time lost to a crash. There was Froome laying to rest the notion that he couldn't ride cobbles on an otherwise surprise-free day on the pavé on stage four. There was André Greipel (Lotto - Soudal) for the second time in the race taking the victory salute, on a crash punctuated stage five, and strengthening his claim to be the Tour's top sprinter. There was the Curse of the Yellow Jersey on stage six, race leader Tony Martin (Etixx) crashing out of the Tour within a few hundred metres of the line. And on the seventh day Mark Cavendish (Etixx) finally pocketed his first Tour stage win since 2013, on a day when the peloton rode without a yellow jersey for the first time since 2007. 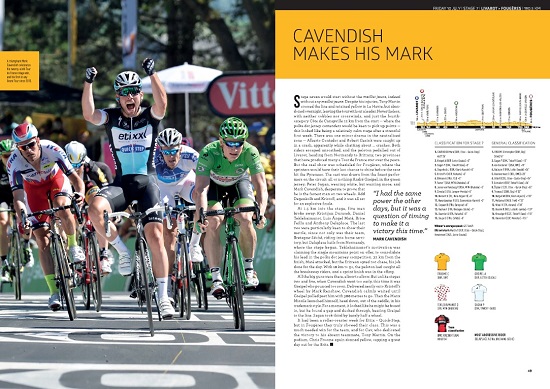 One step closer to the record...

Through the first week France's much vaunted nouvelle vague had been swept away, with Thibaut Pinot (FDJ) starting the second week with a six minute handicap. But in Brittany French honour was restored when Alexis Vuillermoz (AG2R) took the first stage victory for France on the Mûr-de-Bretagne at the end of stage eight. Stage nine saw the 22 injury-depleted teams tackle the team time trial and it was BMC who came out on top, strengthening the claim of team leader Tejay van Garderen that the Fantastic Four pre-race favourites should have been the Famous Five. But after a rest day in Pau Froome all but rendered that debate moot, storming to victory on the slopes of La Pierre-Saint-Martin on Bastille Day:

"Suddenly, as if deciding he'd simply had enough of his opponents' caprices, the maillot jaune attacked 6 km from the summit. As he flew up the road in his distinctive style, it was, as usual, impossible to tell from his contorted body and grimaces whether he was on the verge of exploding or imploding. Crossing the line solo, a beaming Froome raised his arms in celebration, the most expressive we've seen him in one and a half weeks. Behind him [team-mate] Richie Porte chased down Quintana for second place - a move intended to deny the Colombian his six-second bonus."

After such an opening Pyrenean offensive the second day in the Pyrénées was somewhat subdued while the third saw a lethargic peloton tackle the Plateau de Beille in rain that would take its toll on some as the race progressed. The first phase of high mountains was followed by four transition days leading up to the edge of the Alps and the second rest day, during which time Froome's lead went undiminished, Peter Sagan (Tinkoff) managed to bring his tally of second places to five and Greipel his tally of stage wins to three.

"There are those who bemoan modern cycling, a world obsessed with comparative performance indicators and power output curves. They cast a nostalgic gaze back to a not-so-distant past when man attacked mountain with nothing but a steel bicycle and true grit; when the only data available were the time-gaps shouted by spectators with stopwatches. They would say that Bernard Thévenet's devouring of The Cannibal, Eddy Merckx, on the overheated slopes of Pra-Loup in 1975 was a case in point. Thévenet would win the Tour. Merckx would never wear yellow again." 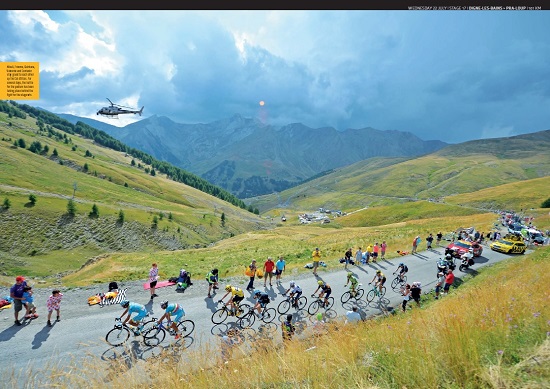 When the Tour resumed after its Gap day of rest, it was with a stage to one of the holiest of altars in cycling, Pra-Loup, where Merckx suffered a défaillance forty years before and the Cannibal's reign of terror was brought to an end. Anyone hoping for the same to happen to Froome was sorely disappointed, he ending the seventeenth stage with his grip on the Tour's throat tightening: Van Garderen DNFed, taken by the dreaded lurgy, and only Quintana lingered as any kind of threat, though with the clock ticking down and the mountains running out where he was going to find the three minutes and more he needed to take the maillot jaune was questionable. When again nothing changed on the eighteenth stage - where the race climbed the photogenic Lacets de Montvernier and Romain Bardet (AG2R) took France's second stage win - it seemed unclear whether Quintana's directeur sportif Eusebio Unzué was willing to gamble all for the glory of the maillot jaune or had already settled for the consolation prize of having two riders on the lower steps of the podium (his Colombian vedette and the ageing Spaniard Alejandro Valverde).

Three days out from Paris and on the penultimate day in the mountains, Froome and his Sky team-mates finally showed signs of weakness. Geraint Thomas - Froome's new Richie Port - cracked and tumbled down the GC and Quintana, for the first time in the whole Tour, managed to put time into Froome, though having left his attack until six kilometres from home he had to settle for little more than a pocketful of loose change, 30 seconds on the road and another two in bonifications. With only the Croix de Fer and Alpe d'Huez to climb on the Tour's final Saturday, the Colombian still needed more than two and a half minutes if he wanted to exchange his best young rider's white jersey for the yellow of overall victor. For defending champion Nibali - who had long since surrendered any hopes of back-to-back wins - it was a happy day, of sorts: not only did he win the stage but he added fuel to the fire burning between him and Froome, the Italian thumbing his nose at Tour etiquette and attacking when the Briton stopped briefly to remove a stone from his brakes.

And then came the grand finale, Alpe d'Huez, the Tour's Hollywood climb, where Quintana hoped Froome would be seeing stars after he delivered his knockout blow. When it came, Froome was left reeling, but the Movistar rider had left it too late and the bells of the Alpe's Église Notre Dame des Neiges tolled his doom, the Colombian only recovering half of his deficit, still 72 seconds shy of yellow as the real racing came to an end and the riders prepared for the victory parade that is the final stage of the Tour to the Champs-Élysées.

"It was a breathtaking end to a gripping race. Greipel claimed his fourth stage win of the Tour. Sagan won his fourth Green jersey competition. Quintana wore white and stood on the podium for the second time in his career, and Chris Froome sealed the deal on both the maillot jaune and the polka dot jersey. He had suffered in the way only a champion can, parrying attacks from his valiant opponents in the peloton, his critics in the press, and, unfortunately, from the occasional hooligan on the roadside. But Froome rose to every challenge, becoming the first British rider to win the Tour de France twice, and the ultimate victor of one of the greatest editions of the Grande Boucle ever raced." 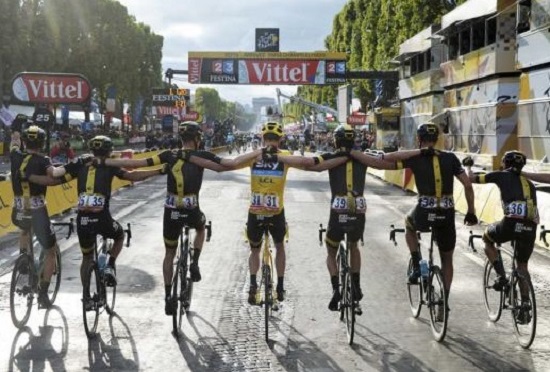 The hyperbole of that final paragraph aside - this is an official ASO production and, as with the Olympic Games, it is now the custom to claim the event's latest edition the greatest - Le Tour de France 2015 is an enjoyable romp through a Tour that, while it may not have been the greatest, didn't fail to entertain. Yes, a more forensic book would discuss events off the bike - not just Froome's "critics in the press" and "the occasional hooligan on the roadside" only briefly hinted at by Éclimont but the temper tantrums reputedly thrown by various riders and other such stories behind the story - but I don't really expect an annual like this to tell that side of the tale. This is a book you pick up primarily for the images with the words acting to jog your memory about the events they depict. This is a book that celebrates the Tour de France. A book that reminds you the Tour is worth celebrating.