Kings of the Road, by Robert Dineen

A potted history of British cycling mixed with the author's own attempt to ride the Étape du Tour.

Share All sharing options for: Kings of the Road, by Robert Dineen 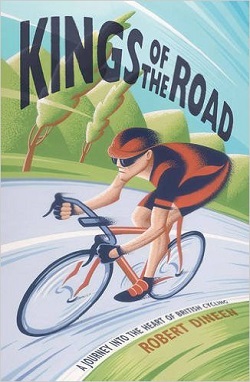 Robert Dineen's Kings of the Road is - in the words of the author - "a character-based and unashamedly idiosyncratic history" of British cycling, taking the story of the sport in Great Britain up to the turn of the millennium. Here's Dineen explaining the concept:

"But what about the heroes who competed before cycling's renaissance? Have all their stories been properly told? Aside from a few notable exceptions - Tom Simpson and Brian Robinson, for example - I think not, because I have spent the past year interviewing a selection of the most compelling and found that most of them had rarely, if ever, been asked to tell their tale in any depth. Though this seemed an oversight, I was glad to be given the opportunity to correct it because their stories were often fascinating."

Dineen's reign of Kings begins in the 1940s with Percy Stallard breaking away from the NCU to form the BLRC. Before the BLRC the only road racing (as opposed to grass and track racing) was time trialling. There had been road racing before that, a long, long, long time before that, there was James Moore who won "the first recorded bike race, around Parc St Cloud in Paris" and then Paris-Rouen (a race, Dineen tells us, whose "status has since been downgraded, after evidence emerged of other, lower-profile races preceding it"). And there was Jimmy Michael and Arthur Linton, the latter a man who "broke the world hour record" and then died two months after winning Bordeaux-Paris, a death many believe "was the first in cycling connected to doping."

Kings of the Road, then, is a book not unlike recent contributions from Chris Sidwells (The Long Race to Glory), Ned Boulting (On the Road Bike) and Ellis Bacon (Great British Cycling), potted histories of British cycling built around interviews with some far from unknown stars of the past. As with Bacon and Boulting, Dineen has decided that this on its own is insufficient and that the history of British cycling is best served up with a story about himself and his own cycling experiences. Or - as seems to be the favoured genre in Great Britain - his own cycling inexperience.

By this stage we're all all too familiar with the script for this tired and tiresome genre of travelogue. We get Dineen turning up fifteen minutes late for a sportive with a dismantled bike in the back of his car and decking it before even leaving the carpark. As with New Labour, you think that things can only get better. As with New Labour, they didn't. We follow Dineen as he seeks training advice, having set himself the target of riding the 2014 Étape du Tour (Pau - Hautacam) and then goes for an expensive bike fit with a firm of expensive bike fitters we've already read about in another recent cycling themed take on An Idiot Abroad. We find Dineen finding excuses not to go riding. We find Dineen asking his interviewees for training tips and preparing to ride his first century - two of them, in fact - in the week before his Pyrenean adventure. Finally we get to Dineen's Étape which, rather than being a simple day out in the hills on the Franco-Spanish border, turns into an Epic Adventure with rain on the Tourmalet seeing the author pulling up in Barèges on the descent off the mountain - with 23 kilometres of descent ahead of him before the final 14 kilometres haul up to the ski station at Hautacam - and going gear fondling in the local ski shop, exiting with new "mittens, an oversized fleece, thermal socks and balaclava."

"The Etape provided me with motivation to ride over the past six months or so. It helped me get fit and ensured that I improved my technical knowledge of the sport. It also meant that I spent a little more time with my closest friends than I might otherwise have done. But I cannot summon one good reason for subjecting myself to further punishment. I could quit now happy in the knowledge that I had scaled one of cycling's greatest peaks in the most formidable circumstances. In the fifty miles leading up to the Tourmalet I had experienced the thrill of riding on closed roads, too, with riders forming impressively disciplined groups and locals cheering you on.

"It is not as if quitting will affect anyone else. I do not know where my friends are. Andy split us up by attacking when I suffered a mechanical. In trying to catch him up I left the others behind, but they have probably overtaken me by now. I have been in the shop for half an hour."

Stage 18 of the 2014 Tour de France, Pau - Hautacam, which also formed the route of the Étape du Tour

If this whole genre of travelogue writing can be described as the descent of British cycling - all of the authors trying to outdo one and other with proudly told tales of their incompetence, insecurities and inability to fix even a puncture properly (in other words, Monty Python's Four Yorkshiremen sketch reimagined, without the humour) - the rest of Kings of the Road is about British cycling's ascent. Being a bitty, episodic history of the sport in the UK you don't really get to chart this ascent, to understand it, you just dip in and out and meet some of the characters who were part of (it's only with Tony Doyle and Peter King that you get some clear connection between the stories being told). This is not to dismiss these stories but Dineen's lack of an overarching narrative here - his own efforts to ride the Étape apparently having taken its place - do make for apparently aimless meandering.

The previously told stories being well enough known at this stage, let me single out one of the less well known stories Dineen tells, that of Reg Barnett. One of the sources for Dineen's last book - his biography of British track sprinter Reg Harris - Barnett was (like Harris) a track star who bagged national titles and represented his country at the Olympics and world championships. Somewhat unusually for a track sprinter, Barnett switched to the road, riding for British-sponsored teams, such as Holdsworth and Falcon and - most famously - TI-Raleigh in 1973 and 1974, right at the time it was switching from being the British-bossed team that couldn't to the Dutch-bossed team that could, Peter Post turning it into one of the powerhouses of the professional peloton. Barnett offers Dineen a story of doping and race fixing in British cycling, two diseases an awful lot of others (Dineen included in his Harris biography) like to pretend only afflicted foreigners.

Unusually honest about the darker side of the sport as Barnett's tale is, it is actually representative of several of the stories Dineen tells:

"Though he didn't realise it at the time, Reg's recklessness was linked to depression that would become so profound that he suffered several psychotic episodes and had to resist efforts to have him committed to a psychiatric hospital. Only when he met his wife Marina in the pub she worked at did he calm down. [...] He has spent time with the psychiatrist trying to identify the root of the depression. The psychiatrist thinks Reg's problems began when he accepted his first professional contract as a cyclist. 'He was convinced. He went back as far as when I was twenty-five, which must be about right. It's when I turned pro on the road and started really going for it.'"

Take Barnett's tale alongside tales of Beryl Burton (who, famously, had a troubled relationship with her daughter, once refusing to shake her hand after having been beaten in a race), Mandy Jones (who had a psychologically troubled relationship with her boyfriend-cum-coach) and Colin Sturgess (one of the shining lights of British cycling as the '80s moved into the '90s, only for his career to be derailed by mental health problems) and you get a rather dark portrait of British cyclists and British cycling. Curiously, though, Dineen fails to take this thread and go anywhere with it, simply leaves it out there, woven through the individual stories, hanging over Kings of the Road like a dark cloud.

So how do Dineen's Étape and his episodic history of the sport in the UK interact, what is the crossover between the two? In his closing words, Dineen suggests that doing the Étape earned him the respect of clubmates and gave him "a greater appreciation of the challenges faced by elite cyclists. It has been said before but I relate to them a little differently, especially those from decades past, the amateurs with little support and experience, and sometimes a day job to work around." Whether this will add to your appreciation of those riders, well that is for you to decide.