The 2014/15 'cross season, as seen through the lens of Balint Hamvas

Share All sharing options for: Cyclocross 2014/2015, by Balint Hamvas 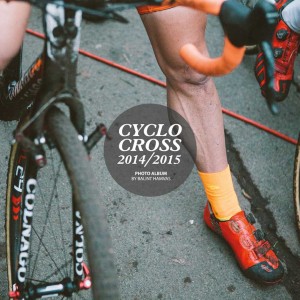 Title: Cyclocross 2014/2015 Photo Album
Author: Balint Hamvas (with contributions from Nicholas Lemke, John Coe, Caro Cardinaels, Paul Maunder, Simon Lamon, Dan Seaton, Nico Dick, Bill Schieken, Charlotte Elton and Mark Randall)
Publisher: Cycle Photos
Year: 2015
Pages: 233
Order: CyclePhotos.co.uk
What it is: The 2014/15 'cross season, as seen through the lens of Balint Hamvas
Strengths: You'll buy it for the quality of the photos, which mix race action with local colour, but the breadth of the writing shouldn't go without comment, passing beyond just the races themselves and touching upon important aspects of the sport, from the disparity in earnings between men and women to what makes a good pair of tyres
Weaknesses: Captioning in photo albums is always a hotly contested issue

Prufrock measured his life with coffee spoons. I've reached a point where I can measure my life on the Café Bookshelf with Balint Hamvas's cyclocross annuals. Once the leaves start falling from the trees, it's time to expect the arrival of another volume of 'cross photos. This one - the fourth during my time here - almost didn't arrive. Hamvas explains in his introduction how difficult the process of making and marketing can be, how trying the business side of it can be. With unsold copies of previous volumes still to hand, Hamvas had thought not to bother with another. Then came the Milton Keynes round of the World Cup:

"this event gave me the opportunity not only to finally meet many of you, the loyal readers, but my little team of helpers and I sold a lot of books, both old and new, Within a few days, all the old copies were gone and by the middle of December, miraculously, all the 13/14 books were sold - the first time ever." 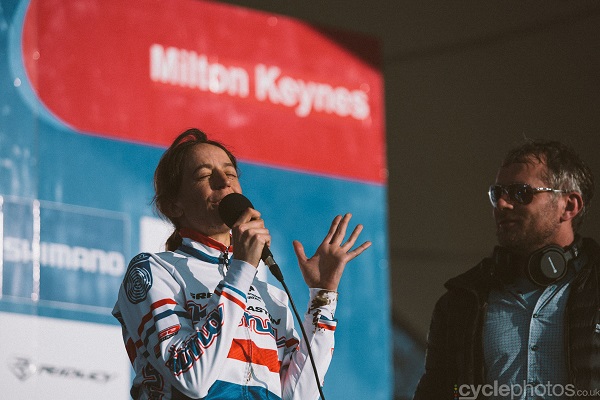 I have seen the moment of my greatness flicker 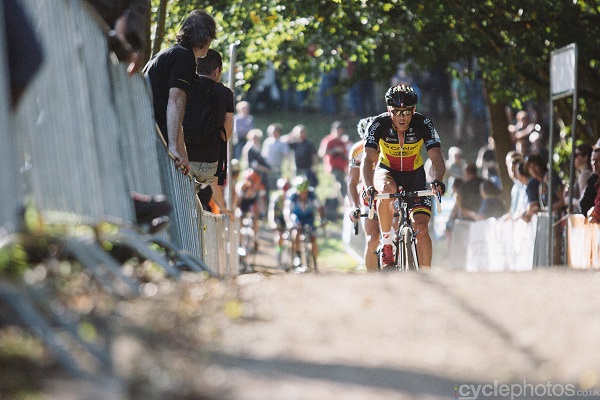 March 2016. The end of the world. Of Sven Nys. Two-time World Champion. Nine-time national champion. Thirteen Superprestige titles. Nine bpost bank trophies. Seven World Cup series victories. March 2016 is when he draws a line under it all and moves on. Through 2014/15 CX fans got a taste of things to come after the 2015/16 season, Nys adding few notches to his belt. Appropriately, Hamvas dedicates a chapter to Nys in Cyclocross 2014/15, Nico Dick offering an elegy of sorts to the falling champion, Nys himself offering some comment on the future:

"A question we would like to pose: Nys has thousands of fans. And as the 'ideal son-in-law' he conquered the hearts of neutral cycling and sports fans. What will happen at the start of the season in 2016? Will the Nys-fans keep coming to cyclocross as neutral fans, will they choose another idol, or will they lose interest and disappear? 'A very difficult question,' finds Sven Nys. 'I don't know the answer at all. It is a known fact that people want to witness a spectacle, that they support cyclists who give it their all and race "attractively". And not unimportantly: most fans expect that their idol has something to say."

Bill Schieken, elsewhere, takes a look at the two riders already filling the gap where Nys (and his own Banquo, Niels Albert) used to be: Mathieu van der Poel and Wout Van Aert, the new yin and yang - the van and Van - of cyclocross.

"Granted this rivalry is still in its infancy, but it has the potential to be one of the greatest in cyclocross history. Whether that potential is ever realised, however, is up in the air. Although Wout has proclaimed himself to be a cyclocrosser first and foremost, Mathieu is a huge talent on the road. Mathieu is committed to race cyclocross next year, but beyond that he may be lured to the road, following in the footsteps of countryman and former cyclocross world champion, Lars Boom. Regardless, this was without a doubt the year of the young guns and a great year at that."

Time to turn back and descend the stair 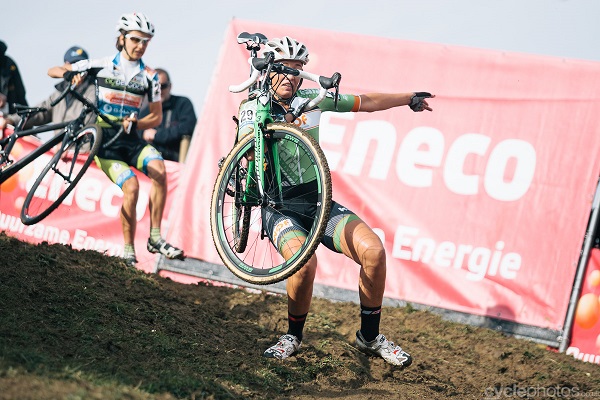 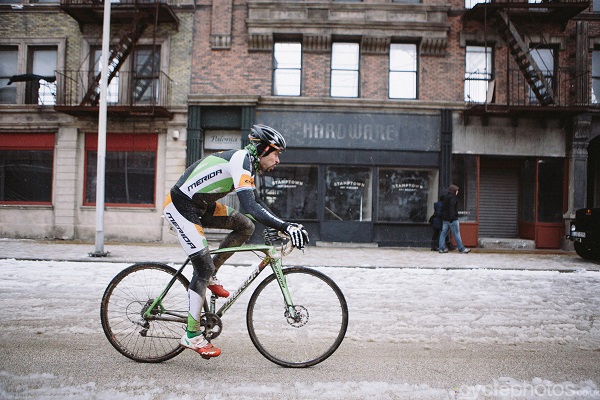 Twice during the 2015/15 'cross season Hamvas got to photograph 'home' races. The first, in his adopted home of Great Britain, the Milton Keynes round of the World Cup. The second was in his other home, Hungary, when the Korda film studio in Etyek, near Budapest, hosted a Volkswagen-sponsored 'cross race. Here's Hamvas:

"The course snaked through the set of two productions: the Borgias TV show and the movie Hellboy 2. This meant that each lap the riders started in contemporary New York and ended in Medieval Italy. I've shot races in prettier settings and races with far bigger crowds, but this was hands down the most special venue." 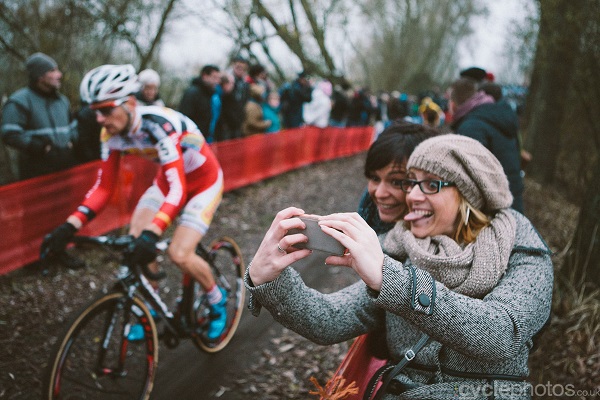 They will say: But how his arms and legs are thin! 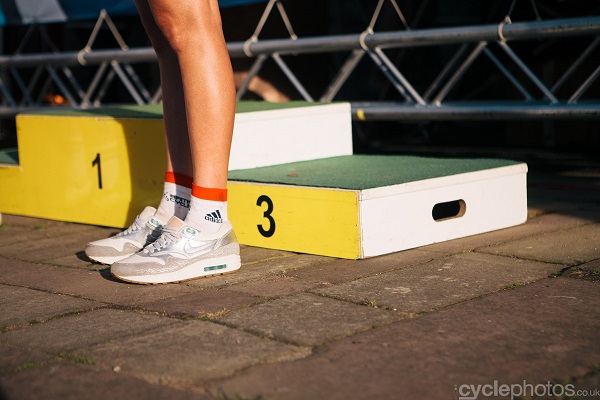 One of the stranger things I've grown to like in Hamvas's cyclocross annuals are the shots of riders legs. It's not that I have a particular fetish for legs. It's the challenge of the photos, trying to attach the rest of the body to the legs, identify the person they belong to. See how you get on with these three:

And this, and so much more? 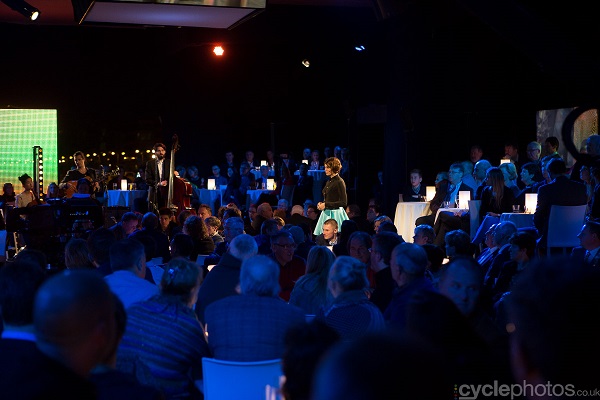 Were Cyclocross 2014/2015 just a collection of photos and race reports from the 2014/15 'cross season one might be tempted to judge the need to own a copy by the quality of the 'cross season whose story it tells. Being one of those interregnum years - for the men especially, but also for the women - it's tempting to just file it away for the moment and only revisit depending on how the future turns out. But there is a lot more to Cyclocross 2014/2015 than just the racing.

One of the joys of Hamvas's cross annuals has been that they look to the wider world of the sport, they don't just get starry eyed about riders and races. As well as sections on fans and volunteers, as well as the sections of Nys and Van der Poel and Van Aert, as well as the off kilter races like Etyek - and the core races of the World Cup, the bpost bank trofee, Superprestige and the World and European Championships, this time with results from each race and series - Hamvas and his team of writers discuss important things like the earnings gap between men and women (is it fair that top earning rider in the women's ranks, Sanne Cant, earned just €29,900 while her male counterpart, Kevin Pauwels, trousered €101,271?) and what it is that makes a good set of 'cross tyres (Hamvas visiting the Dugast factory, where tubulars are handmade, in the Netherlands). These extras, if you care about cross, even if you're only a little 'cross curious, they're the icing on the cake, they're the parts of Cyclocross 2014/2015 you will return to as we wait just to see just what sort of vintage the season turns out to have been. If you're thinking of waiting to buy a copy when you see how the 2014/15 season is ultimately remembered, they're the bits that should make you buy it immediately.