An illustrated history of one the UK's oldest cycling clubs, the Anfield Bicycle Club.

Share All sharing options for: Amazing Anfielders, by David Birchall 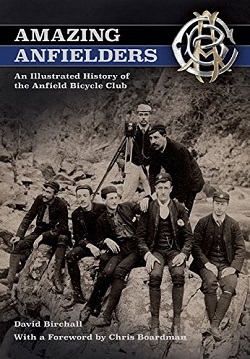 Title: Amazing Anfielders - An Illustrated History of the Anfield Bicycle Club
Author: David Birchall, with a foreword by Chris Boardman
Publisher: Amberley Publishing
Pages: 96
Year: 2015
Order: Amberley
What it is: A illustrated history of the Anfield Bicycle Club, one of the oldest of the UK's cycling clubs
Strengths: As well as being a fascinating collection of photographs and stories, it also serves as a guide to the club's extensive digital archive, the scale of which might otherwise seem daunting
Weaknesses: As Birchall notes, the book is really an illustrated companion to the earlier The Black Anfielders

In all that has been written about Great Britain's rise and rise as a cycling nation, very little has been said about the role played by cycling clubs, all the focus put on the individual, or the federation, British Cycling. But where would the sport be without its clubs? Consider, if you will, the case of one of the first heroes of British cycling, George Pilkington Mills, who - by now - you all know won the inaugural edition of Bordeaux-Paris in 1891. While you may know that Pilkington won riding a bike provided by the Humber bicycle company, what's less well known is that he rode as a member of the Anfield Bicycle Club. As did the man Mills beat by six hours at the end of the near 600 kilometres race, Monty Holbein.

Formed in March 1879 in the district of Liverpool that gave it its name, the Anfield Bicycle Club is one of the oldest of the UK's cycling clubs, created at a time when the high-wheeler ruled the roads and the diamond framed safety was yet to find a market. (Today, the word Anfield is synonymous with football, but even in that cycling played a small role. In 1892, the brewer - and, later, Tory mayor of Liverpool - John Houlding created a new football club after the tenants of the sports ground he owned at Anfield Road upped sticks and left in a dispute over rent and the general running of the club. That departing club was Everton FC and the club Houlding created in response to their exit was Liverpool FC. A well as his roles in Everton - he was president - and Liverpool, Houlding was also a member and past president of the Anfield Bicycle Club.)

In addition to the touring and social sides of the club, Anfielders gained for the club a reputation for setting long distance records. There were place-to-place records, such as Liverpool to London, or Liverpool to Edinburgh. There were time and distance records such as 50 and 100 miles, or 12 and 24 hours. And there was LEJOG: Land's End to John o' Groats. ABC members such as Lawrence Fletcher, 'Artie' Bennett, and 'Doc' Carlisle were to the fore in cementing the club's link with the End-to-End record. As was that man George Pilkington Mills.

Born in Paddington, London, in 1867 Mills became a Black Anfielder in 1884 (back in those days, the Anfielders were, informally, The Black Anfielders, a name given to them for their all black uniform: "Black coat, breeches and hose, black huntsman's cap with silver monogram, the captain to be distinguished by a gold monogram and gold lace band round cap, sub-captains a silver monogram, and silver lace band round cap. The uniform to be compulsory."). 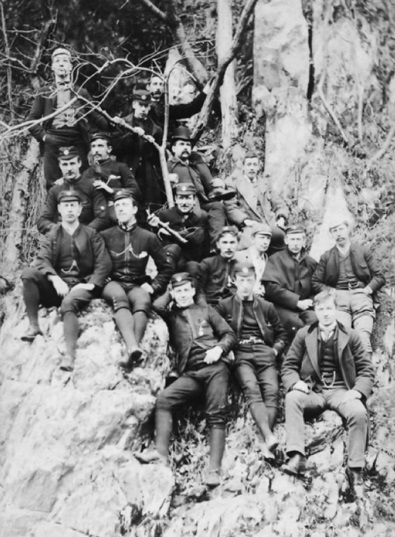 In July 1886 Mills - aged 19 - set a new LEJOG record of five days, one hour and 45 minutes, riding on a high-wheeler. As was the norm in those days, Mills rode with the aid of pacers, as Birchall notes in Amazing Anfielders: "fellow Anfielders and friends paced him, organised accommodation and food, and secured the help of local clubmen to guide him safely on his way. Mills rode day and night, snatching little sleep."

Mills followed up his End-to-End record by setting a new 24 hour record in August, 268.5 miles, on the North Road (the main highway from London to Scotland, superseded by the A1 and then the M1), also on a high-wheeler. Later that same month Mills was doing another End-to-End, this time on a tricycle, covering the distance in five days and 10 hours - some 30 hours faster than the previous record, held by fellow Anfielder Tom Mariott. In September Mills added two more records to his palmarès: six hours and 45 minutes for 100 miles on a tandem tricycle and - also on a two-seater trike, again accompanied by fellow Anfielder AJ Wilson - two hours 46 minutes for 50 miles, both on the North Road. Then, rounding out his record-breaking year, the teenager broke his own 24 hour record, this time riding a diamond framed safety cycle and covering 295 miles on the North Road. 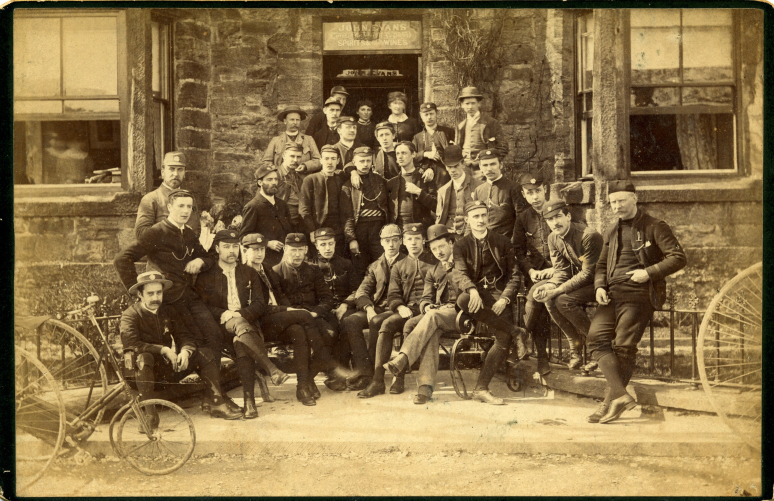 "The Glan Aber Hotel [Betws-y-Coed] was the destination for the 1886 Whitsuntide holiday. The picture includes GP Mills (middle row, hand on lapel), surrounded by Artie Bennett, Lawrence Fletcher and Doc Carlisle. These Anfield riders were among the best long-distance men of their day. Behind Mills is Hugh Fraser, his arm in a sling. [...] The tricycle in the foreground is a Humber 'Cripper', similar to the machine Mills rode from Land's End to John O'Groats later in the year."

In the years after his 1886 annus mirabilis Mills continued to ride and set distance record. He also became a Second Lieutenant in the 3rd Volunteer Battalion, the Bedfordshire Regiment and started a short-lived bicycle business whose collapse made him a bankrupt.

When, in 1891, Maurice Martin of Le Veloce-Sport created La Grande Course de Bordeaux-Paris he wanted the best long distance riders of the day to be present. Many of these were British riders - including the Anfielders Mills and Holbein - who saw themselves as amateurs, even though cycling was their life. As a condition for their participation in Bordeaux-Paris they refused to race against professionals, thus keeping many of their French rivals out of the race (and allowing the British riders to then hire them as part of their pacing teams, with Mills able to call on the talents of the French long distance specialist Charles Terront to get him to Paris first). British riders finished the race filling the first four places, Mills leading them home.

In October 1891, recovered from his victory in Bordeaux-Paris in May, Mills knocked more than 21 hours off his LEJOG record, reducing it to four days, four hours and 15 minutes, riding a diamond-framed safety. In 1893, he reduced the tricycle record to three days 16 hours and 17 minutes. The following year he brought the bicycle record down to three days, five hours and 45 minutes and in 1895, paired with TA Edge, added the tandem record to his palmarès with a time of three days four hours and 46 minutes.

When the Great War broke out in 1914 Mills - aged 47 - rejoined the army and was posted to France in December 1915. His war record won him the Distinguished Service Order and saw him rise to the rank of Lieutenant Colonel. In all, 41 Anfielders are believed to have served in the war [PDF], with four of them dying, two of them brothers, David and Edmund Rowatt, who were killed within a month of each other at the Somme in July of 1916 (a third brother, Robert, was seriously wounded in 1915). 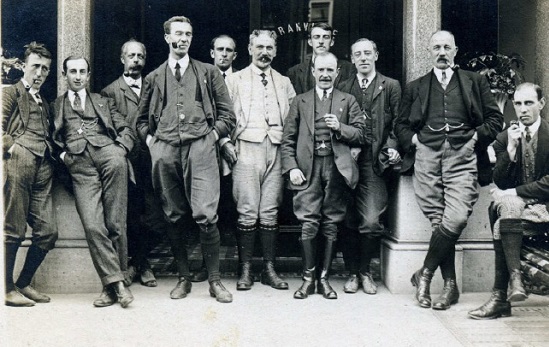 "The end of the 1914 Irish tour coincided with the declaration of war. Three of the young men in the photo enlisted within a month, while President Fell (in the light suit) had the responsibility of guiding the club through the seven difficult years that followed."

As well as its role in developing the talent of long distance champions, the Anfield has also helped shape the nature of touring. Jack Thurston's Lost Lanes Wales contains a story about how the official history of mountain biking - that great American invention, born in Marin County when a handful of enthusiasts popularised off road riding - tends to overlook the contributions of earlier pioneers and how one such group of pioneers rode over the Berwyn mountains in Wales in March 1919, a ride celebrated 40 years later with a plaque at Bwlch Nant Rhyd Wilym. Amazing Anfielders adds more to the story Thurston told, explaining how a group of Anfielders extended their Saturday club ride into a weekend away. The riders set out from near Wrexham as dusk fell, a starlit sky augmenting their acetylene lamps. By the time they reached their destination at Llanarmon Dyffryn Ceiriog the stars were gone as snow began to fall. With the countryside blanketed by snow the next morning, the riders were advised by locals against their planned attempt to cross the Berwyns. The group - now dubbing themselves 'The Berwyn Levelling Syndicate' - dismissed the locals and stuck to their plans. Deep snowdrifts made staying on track difficult. Fresh snow falling made it harder still. But after four hours of riding and walking, the Berwyns were levelled.

"How is so much known about a cycling expedition a hundred years ago? Well, one of the friends, WP Cook, took photographs that have survived, and the adventure was recorded in The Anfield Monthly Circular, [PDF see page 60] and that, too, is part of the Anfield Bicycle Club's archive. In addition, a few weeks later another of the friends - legendary cycling journalist, Walter Macgregor Robinson, writing under the pseudonym 'Wayfarer' - immortalised the journey through an article, 'Over the Top', published in Cycling." 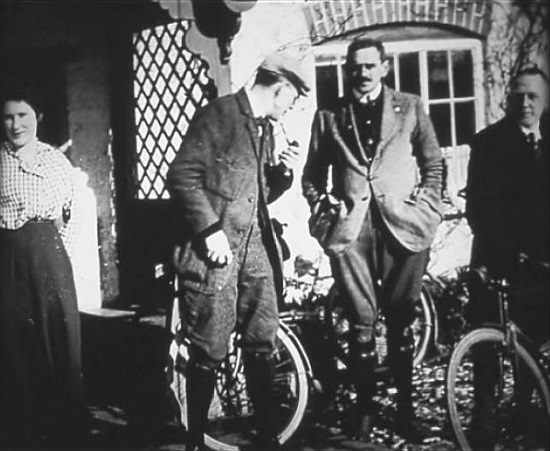 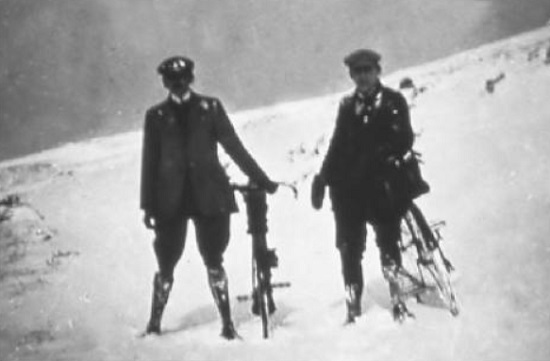 Even into the 1970s - as the Marin County pioneers began to get their act together - the Anfielders were still enjoying a bit of rough stuff. 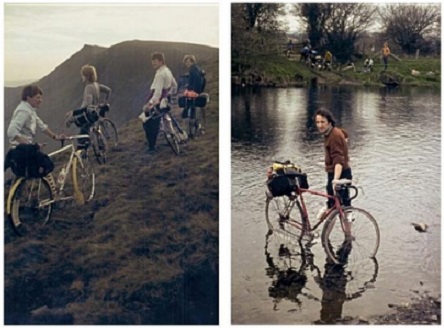 "The Circular recorded a revival of all-night riders [in the 1970s] - we saw the dawn from the Long Mynd on one, and from Moel Sych another. The 1973 Autumn Tints tour led to the summit of Cadair Berwyn on a wonderful October Saturday. Easter tours also led to Wales - here at the Alwen Ford, Corwen - and tracks in the Cambrian Mountains."

The history of the Anfield, then, illustrates the role played by a club within the wider sport, both in racing and in recreational riding. David Birchall dips in and out of that history in Amazing Anfielders: as well as the two main stories told above you can learn briefly about the Anfielders' role in popularising time trialling after the NCU banned road racing, the club's promotion of the 1922 World Championships and many other stories. The book arose out of a £16,000 Lottery grant that enabled the club to digitise its collection of photographs, newsletters and other club memorabilia and share them with Cheshire Archives and Local Studies and - through the club's website - the world at large.

The official history of the club was recorded in The Black Anfielders, published in 1956 and updated for the club's centenary in 1979. With that history still in print, Birchall describes Amazing Anfielders as being a complementary illustrated history, with most of his story being told through photographs and reproductions from club newsletters etc. Weighted toward the early years of the club - the first half of this slim collection takes the story up to the twentieth century while the post-WWII era is got through in a brisk dozen pages - Amazing Anfielders is an enlightening glimpse into a forgotten world of gentlemanly cycling.

That Birchall is largely skimming over history, only briefly touching upon topics, might be seen as a handicap, but when you consider all that has been made available via the club's digital archive, then Amazing Anfielders offers the reader a portal into an otherwise daunting collection of "900 Circulars (12,000 pages), 70 annual reports (3,500 pages), race cards and results sheets (500 pages), and about 2,000 photographs, manuscripts and ephemera." Amazing Anfielders highlights areas of interest for those "interested in celebrating the sporting and cultural heritage of one of the world's earliest cycling clubs." Those who want to know more than the brief history Birchall offers will spend hours in the Anfield's archives finding out more about the stories he introduces them too.