The World Of Cycling According To G, by Geraint Thomas

The Tao of Thomas.

Share All sharing options for: The World Of Cycling According To G, by Geraint Thomas 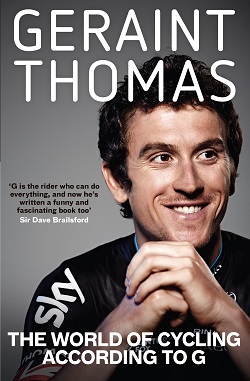 Title: The World Of Cycling According To G
Author: Geraint Thomas (with Tom Fordyce)
Publisher: Quercus Sport
Year: 2015
Pages: 373
Order: Quercus
What it is: Sky équipier Geraint Thomas on life inside the peloton
Strengths: If you get to the end of it and don't realise that Thomas actually loves cycling then you've got a heart of stone encased in ice
Weaknesses: Too many appetisers and not enough meat and two veg

Sky équipier, junior Paris-Roubaix winner1, Olympic gold medallist2, and two-time Bayern-Rundfahrt winner3 Geraint Thomas's The World of Cycling According To G is the latest is a long - long4 - line of post-Beijing British Cycling and My Part in its Rise books. In it the Welsh fan favourite talks very little about himself and instead offers readers insights into life in the professional peloton, and inside Team Sky.

Here's just some of the Tao of Thomas.

- The Perfect Ride
We're going west, out towards Ogmore-by-Sea. The terrain is never more than rolling, and we'll stop for Welsh cakes and coffee at a little cafe in Llantwit Major. It's run by a guy who used to race bikes, so the welcome will be warm. He'll be showing highlights of the previous day's victory on the big screen. Bolstered by the caffeine and glorious slaying of New Zealand, we'll cruise back nice and steady, possibly breaking it up with a few spontaneous races to the next village or roundabout. Appetite awakened we'll pedal straight past mine and up to my mum's for Sunday lunch.

- Rain
Whenever there is bad weather at a race there will be a Briton in the showdown - Cav, Swift, Sky teammate Ian Stannard. What is a convenient excuse for others becomes a soggy-bottomed opportunity for us. We can handle it where others cannot.

- DaveB
I've heard Dave Brailsford described as a cross between the Dalai Lama and Colonel Kurtz, I've heard him compared to a free climber, all risk and reward. I've heard him described as the best sports coach Britain has ever produced. Here's how I prefer to encapsulate him: you best mate's dad.

- Climbing
Some fear it. I believe you have to love it.

- Descending
Never do you feel more at one with your bike than when you are descending.

- When the Wind Blows
Wind? What can mere wind do that mountains, freezing rain, flat-out sprints and blazing heat can't?

- Belgium
Belgium, for the professional cyclist, means the end of winter and the slow start of spring. So, when I shut my eyes, I see this: rows of dark, bent trees; narrow, wet roads; grey skies overhead with rain on the way or just passed through; barren ploughed fields; and cold-looking cows. Plus the occasional knocking shop.

- The Bonk
Occasionally I will wonder: do French riders crave the same foodstuffs when they bonk? I'm aware that my own fantasy list could hardly be more British. I've never seen a Double Decker in a French grocer's. Perhaps they experience a more refined bonk: desperate for a Petit Écolier, craving a packet of langues du chat.

- You cannot use someone's nickname unless you personally know them well or have been introduced to them as such. A lot of commentators use nicknames that the rider himself has never heard of. Like 'Eddie the Boss' or 'Mr Mainwairing'. I always introduce myself as Geraint. Although, after their third attempt at pronouncing it, I just say 'G'. But I wouldn't go up to Andrew Flintoff and call him Freddie. Or Aaron Ramsey and call him Rambo.

- Winning
Confidence can be either a tailwind at your back or a mental slow-puncture. It fundamentally changes the way you race. Do you really believe, or do you just hope? It can be almost frightening to risk it all going for the win, knowing that if you fail you could end up tenth. It's easier to be caged and subconsciously be satisfied with a top five rather than going death or glory.

With too many of the recent rider-written cycling books you get to the last page and you're left wondering if the rider actually likes cycling. Without wanting to point fingers - but yes, I am looking at David Millar's 'love letter' to the sport he's recently left behind - most pros leave you feeling like they hate riding a bike they talk so much about the bad times: the crashes and the winter training and the sacrifices they make all the time. With Thomas there can be no doubt about his passion for the sport. It's all-pervasive in The World of Cycling According to G, with Thomas refusing to let anything get him down, and for this he is to be congratulated, he having been able to do something so many of his Team GB peers have abjectly failed to do.

So on the plus side, Thomas's love for cycling is infectious and great to see. On the downside, however, read too much of it in a single sitting and Thomas's bonhomie will be about as appealing as Pollyanna dosed up on two litres of Coca Cola and far too much chocolate. After a while you'll feel like just putting your hand up and going Geraint butt, you've done the Jack the lad routine, we get that you're likely to blow the doors off if off the leash and on the lash with Matt Brammeier, that you can have a few ales with Dalai Kurtz but pay for it the next morning, how much you're happy to pass on the knowledge and teach the newbies about how descending is a dangerous dance, a conga of carnage, and you have to stay loose like a goose, you've told us how absolutely brilliant everyone in Sky and British Cycling is, even the mechanics and the swannies - and we do get that you call them soigneurs and not the Sky-preferred carers, you love the lore and aren't going to let yourself be programmed like other Sky PC bots - and we get how warm and witty and wonderful even Froomey is in private compared with how the public sees him, but c'mon, when are you gonna stop hiding behind the banter and being everyone's mate? When are you going to get serious?

It's not that there's none of Thomas's own story in The World of Cycling According to G. For sure, yes, a lot of the book is The Newbie's Guide to Cycling, even down to the genre-standard diagrams for cornering and riding in the wind. And for sure, yes, a lot of the book is Thomas not talking about himself by talking about others (with sections for standard sports book anecdotes about the likes of Bradley Wiggins, Mark Cavendish, Chris Froome, Dave Brailsford, and Chris Hoy). But even in the bitty formula chosen by ghost writer Tom Fordyce (BBC), where you're rarely more than seven or eight pages away from Thomas moving on to a new topic (one minute he's talking cobbles the next he's going downhill fast and then he's telling you how to escape), there are bits of Thomas, of him and the Maindy Flyers and his progress along British cycling's medal-making production line. Piecing it all together, though, does take an effort - which, after 370 pages of banter, is asking maybe too much - and the most obvious takeaway from it all is that Thomas would prefer not to have to tell you his own story, is happier to just shoot the breeze and hide in the slipstream of stories about others.

That, of course, is not going to detract from the enjoyment Welsh sports fans, Sky fans, new cycling fans in general in the UK will get from The World of Cycling According to G. It is an entertaining read. But one best taken in small doses.