Cycling, the city and psychogeography - a potent mix of ideas and experiences.

Share All sharing options for: Cyclogeography, by Jon Day 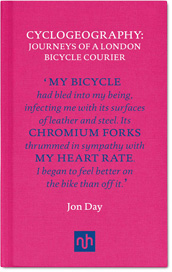 Title: Cyclogeography - Journeys of a London Bicycle Courier
Author: Jon Day
Publisher: Notting Hill Editions
Year: 2015
Pages: 162
Order: Notting Hill Editions
What it is: Cycling and psychogeography as a London-based academic writes of his life as a cycle courier
Strengths: Day tries to marry the styles and thought processes of Paul Fournel and Iain Sinclair and provide a fresh way of writing about cycling
Weaknesses: Day is something of a distant, detached narrator, hard to warm to even as you appreciate his evangelical zeal for cycling

"Urban cyclists live in Euclidean cities, hidden to others, cities made up of inclines and angles, curves and cambers. Almost unconsciously cycling uncovers the deeper and older structures of a landscape than car or train travel can."

Born in Paris in the 1950s - years in which the memory of war was still fresh and a sense of revolution filled the air - psychogeography was a response of sorts to a world being rebuilt with a new form of architecture, a place where psychology and geography collided. In the 1980s the concept was appropriated and redefined by a loose grouping of British writers, a response to the rise of Thatcherism, a time when ideas as well as bricks and mortar were being torn down and built anew. Today, one of the most prominent members of that loose grouping of British writers, Iain Sinclair, sees psychogeography's latest incarnation as being "this brand name for more or less anything that's vaguely to do with walking or vaguely to do with the city. It's a new form of tourism." Whichever incarnation you subscribe to - Guy Debord in Paris, Stewart Home, Iain Sinclair, Peter Ackroyd et al in London, Will Self travelling the world - psychogeography is ultimately about discovering the world in which you dwell, on foot.

Jon Day's Cyclogeography is an attempt to redefine the pedestrian's past-time and claim it for cyclists. "The history of cycling," Day tells us, "is the history of the modern landscape. Since their invention in the mid-Victorian era, bicycles have been associated with freedom, allowing previously immobile groups of people to become self-propelled and socially mobile, to discover the landscapes they inhabit."

But - for Day - cycling is not just about mobilising the masses, there is something inherently literary about it:

"Both cycling and writing are self-directed activities. If you stop working, you stop moving. The verb 'to spin' used to refer to the making of thread from fibre: spinning yarn on a wheel. Later it was applied to the motion of the wheel itself, and eventually the metaphor came full circle, describing the way in which stories themselves are told: spinning a yarn, stitching together a series of observations into one continuous, unbroken narrative. Cycling, like writing, forces you to think not just in terms of individual steps but in terms of conjunctions, routes and structures: how am I to get from here to there? How exactly will I navigate this particular snarl of metal and rubber and steel and chromium? How will I get to the end?"

Rebecca Solnit's Wanderlust allows Day to trace the history of psychogeography from the earliest pedestrianists - those who walked for the sake of walking, not out of necessity, starting with Jean-Jacques Rousseau - through Charles Baudelaire's archetypical flâneur and on to Debord and his dérive and then Sinclair and the London psychogeographers. Valeria Luiselli allows Day make the jump from foot to wheel, she reinventing the flâneur as the cycleur1. Like the somewhat decadent flâneur - for whom, in the words of Walter Benjamin, "the fruits of idleness are more precious than the fruits of labour" - Luiselli's cycleur "has discovered cycling to be an occupation with no interest in ultimate outcomes."

At the heart of Cyclogeography, though, is a contradiction: Day did not ride for the sake of riding, he was not reaping the fruits of idleness, his job as a cycle courier was very much focussed on outcomes. However, there was a degree of happenstance about his occupation:

"Though my journeys were imposed from above they were still unauthored. Or rather, perhaps, it was better to think of the city authoring these journeys itself: writing them through a confluence of economic demand and the curious idiosyncrasies of the post-code system."

And so Day becomes like a cycling Rousseau, for whom walking had been "a tool that could be used to measure yourself against the natural world, a world that was coming into keener focus as urban life began to dominate. You find your place within it by beating its bounds."

Bicycle racing is probably anathema to the idea of psychogeography, it has too much speed and too much purpose. But the stories of those who race bikes provide fruitful soil for would be psychogeographers, particularly stories associated with the hallowed grounds of our sport, the mountains, the cobbled climbs, the pavé etc of iconic races. One only has to utter the names - the Ventoux, the Mur de Huy, the trouée d'Arenberg - and immediately stories associated with them come flooding to mind. Of course, not all these stories are true, something Day does note about professional cycling's history: "In the early years the stories told about the Tour were much more important than the reality. Perhaps they still are." Some of the stories Day tells about the history of racing prove this point, intentionally and unintentionally2.

How much the mythopoetic nature of stories told about professional bike racing rubs off on the stories Day tells of the life quotidian of a London cycle courier I don't know. What does seem obvious, though, is that Day takes a rather romanticised view of their world.

"Bicycle couriering tends to attract the forgotten people who have fallen through the cracks of the system: migrants flying under the radar; gentle, solitary alcoholics who pedal around with cans of Strongbow in their bidon holders; high-functioning smack-heads with their gap-toothed smiles and machine-gun badinage, who travel always with the animated shuffle of the addict looking for a fix. Some are merely dedicated cyclists unable to pursue a career in the professional racing peloton through lack of talent or dedication3. But most are running away from something."

Day was running away from his station in life - he was between degrees - and saw in himself a latter-day George Orwell, "gaining an understanding of hard work at the coalface of capitalism to salve my conscience." In this, his life as an ouvrier de la pédale feeds into what he describes as a labour-fetishism that has been part of writing about London dating at least as far back as Dickens:

"The writer James Heartfield argues that the manual labourer now forms part of a secret lost race of 'troglodytes' that haunt the contemporary city 'cleared away in the transformation of London into a city dedicated primarily to business services and retail.' Such nostalgia is symptomatic of a larger cultural project, represented in the work-porn of television programmes such as Deadliest Catch and Trawlermen, documenting hard work and its associated dangers for our voyeuristic pleasure."

By the end of it all, it's not just the reader's voyeuristic pleasures that are being sated, Day himself becomes something of a passive observer of his craft before finally accepting that the time had come to move on:

"It was my third winter on the circuit4, my third year of shuffling packages around the indifferent city. I was growing weary of it. I had begun to think of the future. Couriering had provided a good stopgap in between studying for various degrees. They had racked up along with the miles ridden - BA, MA, PhD - but I had reached the end of that particular treadmill too. My girlfriend had found out she was pregnant, and I wasn't sure cycle couriering was the best way to support this new life. It was time to move on."

Before quitting, though, Day undertook the second of two rides5 that take Cyclogeography out of the unreal city and put it into a different world, Day retracing the wheeltracks of the poet Edward Thomas, whose In Pursuit of Spring is an account of a 1913 bike ride from London to the Quantock Hills in Somerset. Along the way Day encounters other phantom explorers. There's CE Montague who, in 1924, rode from Manchester to Charing Cross in twenty-four hours "in order to make friends with a great trunk road." There's Hilaire Belloc's The Stone Street and Hoopdriver from HG Wells's novel The Wheels of Chance. There's Edgar Hooley stumbling upon the discovery of tarmacadam and Alexis Martin on the physiology of asphalt. More so than in his accounts of city cycling, here Day captures something of the attraction of Iain Sinclair's writing, demonstrates the potential of cyclogeographic story-telling.

Like London itself, Cyclogeography is a book that defies attempts to define it. It is a memoir of Day's three years as a cycling courier. It is an attempt to create by example - rather than prescriptive rules - a form of writing about cycling, cylogeography. It is an attempt to evangelise cycling. These are all reasons to love Cyclogeography. Another reason is that it is a beautifully produced book, pocket sized with a pink hardbacked cloth cover, a book built to be a travelling companion (as Debord's original psychogeographers travelled Berlin using maps of Paris, why shouldn't I travel Dublin with an account of London in my pocket?).

Like London itself, there are parts of it which are over-familiar, not just through personal passage but through repetition in accounts of others (personally I would like to call a moratorium on any mention of Flann O'Brien when discussing cycling, his molecular theory having been reduced to cliché by over use). Like London itself, there are parts you won't have encountered before (while I was familiar with the work of Richard Long through Bill Drummond, Edward Thomas's In Pursuit of Spring was new to me). Like London itself, Cyclogeography is not always a welcoming read - Day is a somewhat cold and distant narrator - but it is a rewarding experience, leaving you with plenty to think about.