My Hour, by Bradley Wiggins

The sixth volume of autobiographies from Bradley Wiggins, this one an Hour in the life of a Tour de France winner.

Share All sharing options for: My Hour, by Bradley Wiggins 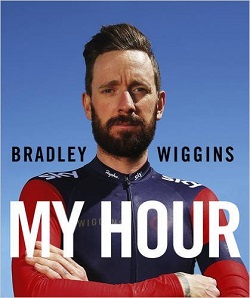 Title: My Hour
Author: Bradley Wiggins (with William Fotheringham)
Publisher: Yellow Jersey Press
Year: 2015
Pages: 176
Order: Penguin Random House
What it is: The sixth volume of the autobiographies of Bradley Wiggins
Strengths: At its best when Wiggins is being reflective on life and the consequences of winning the Tour
Weaknesses: There is a brave attempt to take you inside the mind of a rider doing the Hour which does at times capture the monotony of such an endeavour

Could Wiggins's cycling career really have been better than one Tour title1, seven rainbow jerseys2, seven lumps of Olympic shrapnel of various hues3, four of the same from the Commie Games4, five national championships5 and three European6 along with leader's jerseys from all three Grand Tours7 and the Hour record? Yes, better than all that, even allowing for what's still to come: virtually all his track successes will - have already - become little more than pub quiz answers while all that has been achieved on the road boils down to just two victories: the Tour de France and the Olympic ITT in 2012 (how many other Grand Tour victories could there have been, how many Monuments and assorted Classics could there have been, if Wiggins hadn't put his road career on hold for so long for the bangles and the baubles and the national pride of Olympic glory and then found himself usurped at the moment of his greatest success, dethroned even while his coronation was still fresh in everyone's memory?).

Could Wiggins's Hour - so carefully planned and prepared for, so much superior to the other four pretenders who had left their mark on the record in the time since the UCI rebooted cycling's true blue riband ride in May 20148 - really have been better than the 54.526 kilometres he recorded in London's Lee Valley VeloPark on June 7 last? Actually, it could have been so much better, had it been planned as an attempt to obliterate the record and not the one-for-me ride British cycling owed him. 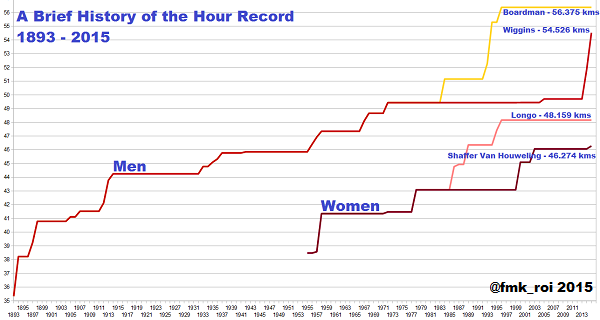 Consider this: if romance had not led Wiggins to choose London's Olympic velodrome - built on the site of the old Eastway circuit he and thousands of British cyclists grew up racing on - he could have gone for the record on Manchester's faster track or taken the advice of Eddy Merckx and gone for the record in Stuttgart's Hanns-Martin-Schleyer-Halle, where the 265 metre track has longer straights than are found on the 250 metre tracks in London and Manchester and so is supposedly more conducive to setting a fast Hour. If romance had not led Wiggins to choose London's Olympic velodrome over Manchester's medal factory he wouldn't have taken and lost such a big gamble on weather, specifically air pressure, which slows a rider down the higher it goes and is usually lower in Manchester than in London. The weather alone is estimated to have cost Wiggins anything between 600 metres had the pressure in London been 'normal' for the time of year and in or around 1,300 metres had he had the same conditions Chris Boardman enjoyed in Manchester in 19969. (In light of the way Chris Froome's recently measured VO2 max of 84.6 ml/kg/min has been "idealised" to a much snappier 88.2 perhaps the UCI should be petitioned to adjust Wiggins's Hour - all Hours - to ideal conditions?)

But that's not all: the Lee Valley VeloPark was packed out to its 6,000 spectator capacity, which helped push the temperature three degrees above the targeted 27, leaving Wiggins feeling dehydrated toward the end of his ride. And while those 6,000 fans brought atmosphere with them - a double-edged sword, one that can push you to go hard at the end but can also see you going out too hard at the start - they also sucked the oxygen out of the air leaving less for Wiggins to replenish his tiring muscles with. As Wiggins notes in My Hour, "going for the Hour in a sold-out velodrome is actually counter-productive to what I was trying to achieve, if you look at it purely in terms of distance covered in the 60 minutes."

But this is actually the real beauty of Wiggins's Hour: it wasn't just about covering the most distance possible in 60 minutes, which is one of those bits of wisdom everybody who's read the Hour's Wiki page will tell you is what the Hour is all about. Wiggins's Hour, it was about creating an event. It was about creating a story - not that bloody awful narrative thing everyone thinks sports need to add as they bend over backwards to TV coverage but an actual story - it was about creating something people would remember and talk about for years to come. Because when you really boil it all down, that's what the Hour is really all about, it's about creating stories, stories which will get told and retold until they become myths, such as the myth of Henri Desgrange setting the first Hour record10 or the myth of Fausto Coppi riding his Hour in Milan in 1942 in between RAF bombing raids on the city11.

For most of the first two decades of its history the Hour failed to tell stories, and failed to garner much interest, was overshadowed by the far sexier - and far, far more popular - paced Hour record. It was only after the paced Hour surpassed 100 kilometres12 and the authorities turned against paced racing that the Hour record we know today really came into its own, with the rivalry of Oscar Egg and Marcel Berthet, the two adding 2,687 metres to the record across five rides between 1912 and 191413. But none of those five rides are really recalled, instead it is the greater story of the rivalry between the two riders that people talk about today. And that is the way it should be. There is only so much that can be said about a man alone riding round and round a velodrome, the clock counting down and the laps piling up. The Hour ride itself - if we are to allow ourselves a moment of honesty about it - it's pretty boring. What matters is the packaging the story of that Hour comes with. Egg and Berthet's rivalry. Coppi's bombs and la bomba. Francesco Moser's appliance of science. Graeme Obree's tale of David versus Goliath.

At the heart of My Hour is an attempt by Wiggins to take you inside his Hour:

"I'm out of the gate, and all the initial questions - how will you feel? how will you manage it? - are being answered. 'Yes, I'm feeling pretty good here, the bike feels good, the position feels good, the crowd are in, it's not too hot in here, I've got a good line, it feels fast, there's no wind, all the doors must be shut, I can hear a girl shouting as I come into the back straight, I wonder if my family are in the track centre, they must be, I saw them earlier.' I'm focused on the effort but it's quite easy, and because the effort is easy you can think about other things. My mind isn't wavering - yet - and my legs are fresh. I'm just controlling the pace, but I'm having to make myself do it."

And on and on that goes, lap after lap after lap. It's a brave thing to attempt to do. How well it works is down to the individual reader and what they want to get from a book about an attempt on the Hour. Even if it is at times a little like watching an Hour ride, heavy going here and there, it is only a small part of My Hour, packaged as it is with pictures and infographics and brief digressions, Wiggins introducing the reader to his Hour heroes (as well as the expected names of Fausto Coppi, Eddy Merckx, Francesco Moser, Graeme Obree, Chris Boardman, Miguel Indurain, and Tony Rominger14, there are two that stand out: Ole Ritter, remembered today more for this failure to retake the record from Merckx in 1974 than for his 1968 ride that set the mark Merckx beat; and Ercole Baldini, who made his mark on the Hour in 1956 and, after Wiggins's ride, welcomed him to the club by sending him a book written about him with a message saying he'd enjoyed watching and regretted not having been able to be there).

All of this is surrounded by a more expansive story, Wiggins talking about the preparation for the event - grist to the mill for future tellers of stories about the Hour - but also offering a little bit of self reflection on life, especially life after his Tour victory. The latter is just a glimpse into a story yet to be told but that glimpse alone is tantalising in what it reveals:

"I came back to Britain and felt like the most famous man in the country after winning the Tour - and if I wasn't, then I was after I'd rung the bell at the opening ceremony at the Olympic stadium, followed by going on to win that time trial. It changed everything for the kids, for Cath and me, and that was all thrust upon us in four weeks with no warning, because it's not something you can prepare for. [...] Having to deal with that massive upheaval in my life took until the following June, when it then became clear that I wasn't going to start the 2013 Tour; it was probably the worst period of my life, in a sporting sense, because I didn't know whether I was coming or going or what I was doing next. So much had changed. [...] The experience had an effect on me. I was forced to change, I've come out the other side and I'm stable again; I know how to handle those situations. We trained so hard for all those years to win the Tour de France but there was no rule book we could look at to tell us about afterwards, how our lives were going to be turned upside down."

"My Hour was going to be about my personal performance on the day, but I wanted to turn it into something larger than that. It had to be an event; I wanted everyone to go away happy afterwards. That was important. [...] I felt that if I was doing the Hour Record then it should be about pleasing the public as well as about the physical performance - it would be open house with everyone invited, it would be a big event and it would be televised, I didn't ever consider doing it any other way."

My Hour tries to capture some of that, in words and images, offers a memento to all those who were there and all those who watched the ride on TV. I have in the past criticised Wiggins's books for coming too soon after the event to have real value but I don't think that holds true here, where you need that freshness if you are to get inside his mind during the ride, and where the rest of the book is Wiggins attempting to wax lyrical on a record that had a golden summer in the years of his youth and upon which he has now left his mark. My Hour offers a fitting tribute to the man and the moment.