To Hell On A Bike, by Iain MacGregor

A MAMIL rides the roads of the Hell of the North

Share All sharing options for: To Hell On A Bike, by Iain MacGregor 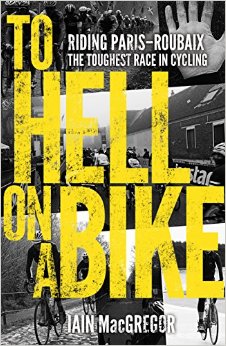 Title: To Hell On A Bike - Riding Paris-Roubaix: The Toughest Race In Cycling
Author: Iain MacGregor
Publisher: Bantam
Year: 2015
Pages: 257
Order: Random House
What it is: A MAMIL rides the roads of the Hell of the North
Strengths: As well as the story of his own preparation for and participation in the Paris-Roubaix Challenge, MacGregor weaves in the history of the race the sportive celebrates and talks to a few interesting people along the way
Weaknesses: Hell can be other people's accounts of their bike rides

The economics of cycling are changing. Once upon a time - and it really, really was a very, very long time ago now - bike races existed to sell newspapers, with the riders rewarded for their efforts by money raised from firms within the bike industry (who then took ads in the promoting paper to tell the public about the prizes won by the riders - the papers really had it made, back then). Slowly at first, and then quite quickly, the power of papers faded. Television came along and from the 'eighties onwards began to bring the sort of wealth to races that attracted covetous glances from the UCI and team owners. So race organisers began to prepare for the day when they might lose some of that TV revenue. By expanding their income base and attaching mass participation events to their races.

The Tour de France alone has been doing this since since the early 1990s (Vélo Magazine began promoting l'Étape du Tour in 1993, which ASO then took charge of) and ASO now have sportives attached to several other races in their stable, from the Paris-Roubaix Challenge to the Liège-Bastogne-Liège Challenge and now including the Arctic Race of Norway Challenge and the Paris-Nice focused Explore Nice Métropole (on the cyclo-sportive side of the business, ASO also have l'Étape Argentina and Roc d'Azur). Some will tell you that it was the Father of the Tour himself, Henri Desgrange, who invented sportives when he created the Audax movement, though some will also tell you that Henri Desgrange invented everything, including the Alps and the Pyrénées. But the Tour - or to give credit where credit's due, Vélo Magazine - did not invent sportives. The earliest races, you could argue, had a certain sportive element to them, in that all you had to do to participate in them was pay the entrance fee (the self-styled Baron Henri Pépin could probably be called one of the first MAMIL sportivistas, or seeing as they used wool and not Lycra back in 1907, a MAMIW sportivista). Certainly the first mega races - Bordeaux-Paris and Paris-Brest-Paris - were really a mix of races and sportives, with a small handful of hardcore would-be-winners and a sizeable contingent of ordinary cyclists eager to just get around the course.

As the sportive market has grown - both in terms of events attached to races and in terms of stand-alone events - so too has grown the publishing industry's interest in sportives. You can find any number of books about what events to ride and how to train for sportives (nowadays you don't just plug the miles and trace the route on an Ordnance Survey map as preparation, you have to put in interval sessions on the turbo trainer and buy all the kit), books such as this new offering from Iain MacGregor, about his preparation for and participation in the Paris-Roubaix Challenge.

The Paris-Roubaix Challenge is the ASO-organised sportive that covers the route of the professionals' race, one day ahead of them. MacGregor - who works in publishing in London - set himself the target of riding the 2014 edition of it:

"I love cycling, and I used to be serious about it - I cycled from John O'Groats to Land's End in the mid-1990s. But recent years of raising twins and working (including a move back from Edinburgh to London for a new job) weakened my enthusiasm for real athletic challenges. For a while I rode my trusty racing-green Brompton through the various parks of west London to work each day, which was enjoyable enough but not entirely life-enhancing. Now, as I'm hitting 45 years of age, an unexpected fire has awoken in me, one which involves taking on a challenge, preferably using pedals."

Having completed the 2013 l'Étape du Tour MacGregor was looking for a new challenge, as he explained to his wife one day:

"‘Maybe,' I say, ‘I don't want to lose any of the good things I got from the Étape, my fitness and so on. I'm not getting any younger and I was hoping doing that race would spur me on . . .' I pause so I can give the impression I haven't really been rehearsing this speech for the past fortnight ‘. . . and actually, now I come to think of it, it really has, and I think I'd maybe like to do another big race one day. Maybe. I mean, if I do another one, it would have to be different this time. You know, closer to home and . . .' I run out of waffle.

‘All right,' Jo says, seeing right through me. ‘What do you want to do now?'

I pull out a book, and place it on the table in front of her. On the cover is a figure, a cyclist, though he is so covered in mud, grit and oil you can barely see his facial features, just the whiteness of his clenched teeth and bulging eyes, such is the effort he is putting into pushing his bike through what looks like a scene from the Great War. Around him is a colourful spectacle of grinning, cheering and happy spectators, who are waving flags and urging him on.

As preparation for the ride (and here I will resist doing as MacGregor does throughout To Hell on a Bike and call the Challenge a race - calling sportives races is a sin even more offensive than wearing replica kit) MacGregor does as many MAMILs do and looks at a dedicated training programme to prepare himself for what lies ahead. He read "many magazine articles (mainly in Cycling Weekly), browsed specific books, and surfed the web to see what most advanced training tips I could find for getting my legs and lungs into the best shape possible - in six months." And then he turned to Chris Sidwells, one of whose books he had been responsible for publishing and who is the author of the self explanatory self-help manual Cyclosportive: Preparing For and Taking Part in Long-Distance Cycling Challenges.

MacGregor's accounts of sweaty sessions on the turbo-trainer in the kitchen and splurging hard cash on undergoing a professional bike fit fill a couple of early chapters of the book but things click into gear as he parks his own story and delves into the popular history of Paris-Roubaix. Here he is joined by the likes of Peter Cossins, Daniel Friebe and Herbie Sykes who fill in a few details of the race's history for him, Cossins talking about why a French race is so important to Belgians, Friebe talking about Roger de Vlaeminck and Eddy Merckx and Sykes filling MacGregor in on the politics behind the result of the 1949 edition of the race when André Mahé and Serse Coppi were each declared winners and in the end had to share the glory.

In one of the more interesting interviews MacGregor calls upon François Doulcier of Les Amis de Paris-Roubaix, who talks him through the hardest cobbled sectors - Arenberg, Mons-en-Pévèle and the Carrefour de l'Arbre - and fills him on the work Les Amis do to preserve the area's pavé and of his plans to add extra cobbles before the race reaches Roubaix:

"For the race itself, we have a new project: that within two or three years we will create a new, final part of the Paris-Roubaix route with three new kilometres of cobbles. It is a great, exciting project for us, but we need money. More than one million euros. We are working on this project with our local government. It is a great plan which we hope will happen. We are also planning a new museum next to the velodrome."

Of the other interviewees (which include Barry Hoban and Roger Hammond, the two Britons who have stood on the podium in Roubaix, both having finished third) the most interesting is Francis Longworth, organiser of the Tour of the Black Country sportive in the UK, who is striving to recreate a little bit of the feel of Roubaix on the roads and lanes around Wolverhampton. Longworth offers an interesting perspective on the attraction of riding over a bit of rough:

"I view it as being as much an aesthetic experience as an athletic one: an aesthetics of speed. Being able to ride quickly over these kinds of roads, while keeping control is exciting and also satisfying in that, if you are fit and strong, it makes you 'aware' of your power in quite an interesting way."

Between the history of Paris-Roubaix and the contributions from Doulcier and Longworth To Hell on a Bike has something to offer the average cycling fan. But that offering is sandwiched between MacGregor's own story. And whether the average cycling fan really wants to know about another average cycling fan's suffering on a bike I don't know. Certainly, with MacGregor taking the book's final sixty or so pages to tell of his big day out on the road to Roubaix, I personally didn't want that much detail on his ride. I would baulk at a sixty page account of Sean Kelly winning Paris-Roubaix, so you can imagine how I feel about having to endure sixty pages of an average cyclist simply trying to get around the course and enduring crashes, near crashes and punctures, all recounted with an excess of exclamation marks.

Others will disagree with me here. If you've done the Challenge, or are thinking of doing the Challenge, you may even think that a sixty page account is too short, you may wish that MacGregor had written a chapter on each of the couple of dozen pavé sectors. And perhaps this is the real attraction of To Hell on a Bike - it's a book for sportivistas, reminding you of what you put yourself through or preparing you for what lies ahead of you.