Climbs and Punishment, by Felix Lowe

Retracing Hannibal's march on Rome, on a bike

Share All sharing options for: Climbs and Punishment, by Felix Lowe 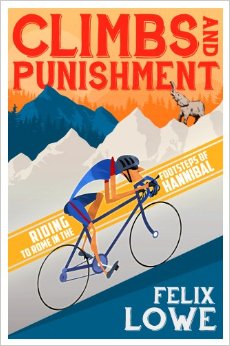 Title: Climbs and Punishment - Riding to Rome in the Footsteps of Hannibal
Author: Felix Lowe
Publisher: Bantam
Year: 2014
Pages: 367
Order: Random House
What it is: Felix Lowe - aka Eurosport's Blazin' Saddles - decides to retrace Hannibal's march on Rome, on a bike
Strengths: With its mix of Lowe's own personal story, that of Hannibal's journey and odd dollops of cycling lore, there's something for everyone here
Weaknesses: At times you do feel like you're actually on Lowe's month-long expedition, suffering alongside his fellow holidaymakers

One day, someone's going to go on a cycling holiday, have a jolly good time, not cry with pain on any of the climbs or scream with fear on any of the descents, they won't get lost due to their own ineptitude, they won't be faced with mechanical problems, not even a puncture, there'll be no crashes, not even a near crash, no dog will chase them, no squirrel try to commit suicide by leaping into their spokes, their companions will be perfectly companionable, there'll be no misunderstandings with hoteliers due to a failure to speak the language, they'll love the food, the weather will be great...everything, it'll be just dandy. And when they get home, they won't bother telling anyone about it. Not a sinner.

Until then, here's another me-and-my-cycling-holiday book, this time from the pen of Felix Lowe, the nom behind the Blazin' Saddles plume. Lowe - for those not familiar with either the name or the pseudonym - writes a blog for Eurosport which has "a small cult following" and is "renowned for its barbed wit and caustic analysis." In other words, he is to cycling what Ned Boutling is to...well...cycling.

For Cyclist magazine Lowe writes a column about finally taking up cycling in his thirties and indulges as many pratfalls as are needed to create copy. He planned writing about riding a sportive (but his Bantam stablemate Iain MacGregor beat him to it) and ended up joining one of his readers who was part of a group taking on a 26-day ride called the Hannibal Expedition, a guided holiday organised by a couple of friends, one of whom had made a documentary for the BBC about Hannibal. The ride would take him from Barcelona, around the eastern foothills of the Pyrénées, up over the Alps and then on down to Rome.

From the outset, things are not going right. There's crashing:

"On the first bend of the entire tour, the rider in front of me came a cropper and crashed. It was Michaela, the only one of our group opting to ride a hybrid with flat handlebars. Starting off at the back, I had quickly caught up with her and seen how nervously she was applying her brakes. When her back wheel inevitably locked up, she swerved, slammed on the front brake and went, rather innocuously it has to be said, over the handlebars and on to her side. Fortunately, as she got to her feet and back in the saddle, she seemed more embarrassed than hurt."

"There's never a good time to pick up a flat, but halfway up the final climb of the day, when you're isolated and it's raining, and just moments after popping a blackcurrant energy gel, is right up there with the worst. The instant pick-me-up powers of the sickly-sweet goo were meant to propel me towards the summit, not aid my tyre de-rimming and right-arm pumping prowess. It was quite a miserable way to cap off what had fast become a rather dank and depressing afternoon."

And there's even injury and mechanical mishaps to be endured:

"My right knee wasn't feeling particularly normal [...]. Incipient twinges had marred some of my long training rides but already, less than two full days into our journey, mild discomfort had graduated to considerable pain. Before setting off from Madremanya I made some alterations with the height and angle of my saddle, but that only appeared to make things worse. Rubbing salt into the wound, my Garmin GPS (on to which Sam had meticulously uploaded every day's route) had a bit of a meltdown early in the stage just after Dylan had dropped back to see Suren, who was probably contemplating a return to his perch in the van, and I'd overtaken Michaela, who had stopped to push her bike across a busy intersection. Resorting to the trusty combination of road signs and common sense, I chased down a rider up ahead whom I wrongly believed to be in our group. (In my defence, the man was old and had grey hair, so the rules of logic had him down as one of our own.) There followed a 15-kilometre detour after I stubbornly refused to backtrack and find the right road."

From very early on, one thing that comes through loud and clear is Lowe's competitive streak. Here he is talking about the group he was riding with:

"So where did I fall in the road hierarchy? To be honest, nowhere. Being the youngest and in possession of a pair of metre-long legs that worked on the pedals like pneumatic pistons powering a high-spec Wankel engine, it was of no huge surprise that I was stronger than a group of riders whose average age was a quarter of a century my dearer. Even with my stained-glass knee (nice and smooth to look at but immensely fragile) I often found myself effortlessly riding clear of my companions. I was forced into an early rethink of tactics, targets and alliances. Firstly, I vouched to clock up more then 100 kilometres every day; which often meant zipping off on impromptu detours to make up the numbers. I also got into the habit of starting from the back of the field, which, by picking off my 'rivals' one by one (or two by two, as was so often the case), is precisely how I clocked the group dynamic so well."

Later in the trip, Lowe's group is joined by another, and these interlopers challenge Lowe's top-dog status:

"Amid much back-slapping and bravado they tweaked their bikes, adjusted their saddles, pumped their tyres, and thumped their chests. A few cursory 'hellos' only enhanced the general feeling of intimidation. These were alpha-males of the worst sort - Australian - and collectively oozing with enough testosterone to fill the boot of Willy Voet's car. I was about as macho as Frank Spencer in a pair of Y-fronts - a Milquetoast mumbler of meek Englishness to their assertive Aussie brawn and cocksure hardihood. Lanky, spindly and now hairier in the leg, I felt even more out of place than Andy Schleck pumping iron at a World's Strongest Man competition."

These extra riders allow Lowe to turn the normal faux self-deprecation that is a staple of this genre into the humblebrag:

"Kapow! With the momentum in my favour, I surged round the bend and saw the road flattening out in front of me. I gave it one last dig to be sure before coming to a rest at an intersection just beyond the summit. Game, set and match to the wildcard. 'Well done, mate, you had me there,' said Pete. 'That was pretty epic. I thought I'd done enough but your legs were just too strong.' Still exhilarated from the climb, I was moved by Pete's words. Coming from such an accomplished rider - and a man from whom I had sensed a wholly fictitious hostility - they meant a lot to this relative newcomer."

The journey itself takes Lowe and his companions from Barcelona up to Carcassonne and on to Avignon, where Lowe adds a detour to take in an ascent of Mont Ventoux. Then it's on to Bourg d'Oisans, where Lowe does a double ascent of Alpe d'Huez. After that it's on over the border to Italy by way of the Col Agnel before the final assault on Rome itself.

Lowe sets his account of the journey against a backdrop of anecdotes about the people he's interviewed - Greg LeMond and Bjarne Riis - and the odd bit of cycling lore and stories about the food eaten and bits and bobs about Hannibal's crossing of the Alps.

As a relative newcomer to riding - which fact Lowe reminds us of time and again - Climbs and Punishment can be seen as something of a coming of age story. How much Lowe matures along his ride, that's left for the reader to decide. For the man himself, the end of the journey opens up a vista of a bright new future:

"My life on a bike has only just started, the knee pains will certainly return, but both the tastiest delicacies and hardest climbs are still on the horizon. The road ahead is long and, like Hannibal, I don't intend on taking the easy route."