Steven Ungerleider's account of the story behind the East German doping machine.

Share All sharing options for: Faust's Gold, by Steven Ungerleider 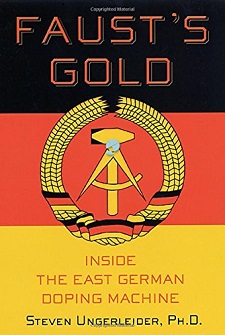 For the forty-one years between 1949 and 1990 that the Deutsche Demokratische Republik existed, sport was used as a tool to demonstrate the superiority of the communist system of the eastern bloc countries over the capitalist system of the west. The Olympics became part of the Cold War, where east battled west. The USA and the USSR went to toe-to-toe. Behind them marched their satellite states, with East Germany one of the best among them when it came to bagging the bangles and baubles at the quadrennial five-ring circus that is the Games.

For East Germany, the need to show that their way of living was superior was more pressing than for most: not only were the East Germans acting out their role in the larger Cold War, but they also had a more local battle on their hands. As well as trying to convince the outside world that the communist system was superior, they were trying to convince their own people - who were forcibly converted to the cause at the end of the war - that the communist system was superior. And, when it came to the Olympics, time and again the East Germans did prove their superiority.

Regular readers will know by now that I love doping. I simply can't get enough of it. And for this reason many people over the last few years have been telling me that I have to - simply have to - read Steven Ungerleider's Faust's Gold: Inside the East German Doping Machine, according to them the book about East Germany's doping programme. For a long time I ignored their advice. This year I caved. And all I can say at this stage is that I wish I hadn't.

Steven Ungerleider is a sports psychologist who was a member of the United States Olympic Committee sports medicine group. Through his work with American athletes in the 1970s and 1980s, he came to hear about the East German doping regime, first through the usual whispers. Since about 1990 onwards - when Der Spiegel began to break the story - many of the whispers of doping have been confirmed. With the assistance of Brigitte Berendonk and her husband Werner Franke - who have been at the forefront of making the German public aware of the extent of doping in East Germany - Ungerleider learned the truth behind the rumours. Toward the end of the 1990s Ungerleider visited Germany to witness for himself some of the trials that arose from the East German doping programme, principally those that involved female swimmers. Faust's Gold is largely an account of a couple of those trials.

By and large, Ungerleider is not concerned with explaining the origins and extent of the doping. Some of that story is told, but in a confusing and confused manner. Some of the story of how Werner Franke came to putting the story before the German public is told, as is the story of Franke's wife, Brigitte Berendonk, an East German athlete who defected to the west and made exposing the truth behind the East German doping machine her life work. Mostly, though, Ungerleider is concerned with the story of the effect the doping had on East Germany's female swimmers and in particular with the story of a couple of the trials in the late 1990s that dealt with those who administered the drugs.

The human cost of doping is an important subject to cover - particularly here where there was scant regard for the health of the athletes being doped - but there is a danger with telling that story, and that danger is that the telling dwells too much on the pornography of pain. And that is the chief mistake Ungerleider makes, he seeming to almost revel in the pain of the story's protagonists:

"Christiane raised her hand and pointed across the dark paneled courtroom to the defendants' table. 'They destroyed my body and my mind. They gave me those pills, the Oral Turinabol [a testosterone derivative developed in East Germany], which made me crazy and ruined my body.' Christiane glared at Dieter Binus; then her voice rose in fury. 'They even poisoned my medal!' She suddenly stood and hurled tot he floor the token of her supreme achievement, the bronze medal she had won for swimming for East Germany in the 1980 Moscow Olympics. 'It is tainted, poisoned with drugs and a corrupt system. It is worthless and a terrible embarrassment to all Germans.' Presiding judge Hansgeorg Braütigam gaveled the stunned courtroom to silence. But he did not admonish Christian Knack Sommer. Everyone in Room 700 knew she had spoken the truth."

More than a decade after its original publication Faust's Gold was updated by Ungerleider, with new chapters added and new text inserted into the old chapters. The net effect of this updating is to make the book even more confusing. Now, as well as talking about the East Germans, Ungerleider has chosen to introduce the case of Lance Armstrong, with a self-serving introductory chapter in which we learn of his attempts to get the former Tour de France champion and the head of USADA to sit down in a room together and talk. We also get offered a twenty page historical timeline of doping in which about the first five pages cover the real history of doping and the rest one American doping story after another, including doping at the Kentucky Derby.

Adding some international perspective - showing that the East Germans were not the only ones doping and comparing some current doping scandals with what happened in East Germany - makes sense. But Ungerleider isn't offering perspective, there is no comparing and contrasting going on here, he simply scratches the surface of the well worn facts of the Armstrong case, and a couple of others. We get to see that there was (and is) doping in the west (or, more specifically, in the US - Ungerleider misses a chance to compare the East and West German doping systems) but there's no real attempt to show how the two were alike. Or, crucially, how they differed. For there are vast differences between the doping that happened in East Germany and the doping that went on - and continues to go on - in the west.

If you're looking for an objective account of the East German doping programme - how and when it came into being, its full scope, the extent to which information on it was shared with other Communist states, and with coaches and doctors in the west - Faust's Gold is not the book to read and you would be better advised to turn to Google and find some of the papers published by Franke. If, on the other hand, you want to read about the human cost of doping - the lives ruined by the unsafe use of dangerous drugs - then, yes, Ungerleider achieves that objective.