It's Top Trumps time on the Café Bookshelf again. 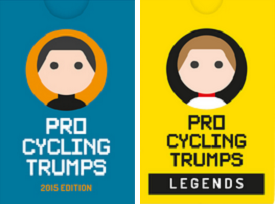 Title: Pro Cycling Trumps
Author: Jim McLeman/Pro Cycling Trumps
Publisher: Pro Cycling Trumps
Year: 2015
Order: ProCyclingTrumps.com
What it is: Three decks of Top Trumps-style cards, covering legends of the peloton, stars from the current season and women cyclists
Strengths: Fun for all the family and the perfect present for birthdays, anniversaries or other occasions
Weaknesses: As always with these things, of course you're going to quibble with the selection, wonder why some riders are included and some not

One of the strange things about doing these Café Bookshelf pieces is that, often times, I get to go from knowing next to nothing about a particular subject to suddenly becoming perhaps a little bit too well informed. Take, for instance, Top Trumps. A couple of months ago, Top Trumps was something I'd heard about but never experienced. Then I got a deck of Claire Beaumont and Rupert Smissen's Cycling Stars and - presto! - I think I was ready to try out for the Irish Top Trumps Olympic team (Top Trumps never having been a big thing over here, there's not much competition to get on the squad). Now, having received another two decks of Top Trumps-style cards - again, with a cycling theme - I'm getting so good at this that I reckon I could even medal come Rio.

Whereas Cycling Stars's deck offers only thirty cards with riders drawn from throughout cycling's history (Eugène Christophe through to Mark Cavendish) Jim McLeman's Pro Cycling Trumps come in three decks (legends, this year's peloton and a forthcoming deck covering the women's peloton) each containing fifty-four cards. Each card contains a basic - but curiously fun - image loosely based on the rider, along with the relevant scoring stats, which here are a bit more objective than those used by Beaumont for Cycling Stars.

Legends of the peloton

The idea of the game is, I think, clear from the review of Cycling Stars: we deal out all the cards, I turn over my top card (let's say it's from the 2015 deck and Cofidis's Nacer Bouhani) and try to pick an attribute which will outscore whatever card you turn over (let's say I pick Bouhani's One Day Races score, 77, and that that beats your top card, Giant's Marcel Kittel, who only scores 62 - I could have picked Bouhani's Sprint score, 90, but I just don't have any confidence in his sprint train, which is unfortunate for you as Kittel's Sprint score of 98 would have beaten Bouhani). Round and round we go until someone has all the cards and everyone else has none. 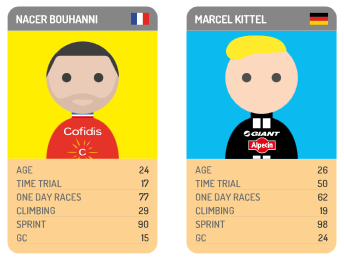 It's all pretty straightforward and it's all pretty good fun. And, with McLeman having used relatively objective traits to score his chosen riders on, there's not much likelihood of blood being shed as you argue over whether Djamolidine Abdoujaparov was better than Erik Zabel. Which is at one and the same time both a good thing and a bad thing. 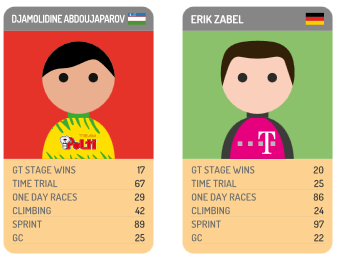 There is, I think, a lot more you can do with these cards than just play a standard game of Top Trumps. You could see if you could build a house of cards using the likes of Tony Rominger, Miguel Indurain, Laurent Jalabert and the rest of that generation and then see how long it lasts before it gets blown down (clue: a bloody long time - you could even toss the USADA and CIRC reports at it and it wouldn't tumble). You could play a timed version of the game, sort of like one of those prequel sprint races they put on ahead of the GPs Montréal and Quebec. You could play a mash-up game, the stars of today versus the stars of yesterday (Stephen Roche would beat Nico on all level, but Dan Martin would tie with Sean Kelly on climbing). Or you could try and recreate races and see how they should have played out: every time I've replayed the end of this year's Paris-Roubaix using the relevant cards, John Degenkolb still wins but no matter how many times I've tried to replay the finish of last year's Liège-Bastogne-Liège I just can't get Dan Martin to fall off.

One more use for you. Regulars round here may know that I'm with Paul Fournel when he says that maps are dream machines, to be read like adventure stories. A map of France, it can tell the whole history of the Tour, if you read it right. I reckon the same can be said of a deck of cycling Trumps. All you have to do is use the cards the same way Tex Tyler's World War II soldier used a deck of playing cards as a surrogate book of prayer, allowing one deck of cards to replace all the cycling books you've ever owned. Who needs their cycling book shelf on a Kindle when really all you need is a deck of cards?

Let's use the legends pack here, fifty-four riders ranging from Costante Girardengo and Alfredo Binda through Ferdy Kübler and Hugo Koblet, on past Luis Herrera and Andy Hampsten and right up to Paolo Bettini and Óscar Freire. Let's pick three cards at random and see what stories they tell. First, there's Fred de Bruyne, then there's Charly Gaul and finally there's Alfredo Binda.

De Bruyne is the least recognised name of that trio, a rider who today rarely gets the credit he deserves. Between 1956 and 1959 he was the best rider in one day races. In two years he'd won four of the five Monuments (Milan-Sanremo and Liège-Bastogne-Liège in '56, the Ronde van Vlaanderen and Paris-Roubaix in '57) For three years straight ('56 through '58) he came out top at the end of the season in the Challenge Desgrange-Colombo, the forerunner of today's World Tour. Across four years he'd notched up wins in seven editions of the Monuments. Perversely then, despite all this success, the best story I know of him is the day he lost to Shay Elliott in the 1959 edition of the Omloop Het Volk, the day Ireland's first flahute became the first English-speaking rider to win The People's race.

If De Bruyne is one of the under-acknowledged stars of the classics, no one is ever likely to overlook Charly Gaul's contributions to the Grand Tours. The Angel of the Mountains was there that day in the 1956 Giro d'Italia when they scaled Monte Bondone in a snowstorm and two years later he lit up the road to the summit of Mont Ventoux, scorching the climb from Bédoin in 1h02'09" (a record for the climb that stood for more than three decades, not falling until the Critérium du Dauphiné Libéré in 1999). That ride put Gaul within four minutes of Raphaël Géminiani, who was wearing the maillot jaune in the 1958 Tour. But the very next day Gaul surrendered more than eleven minutes and Gém seemed to have the Tour in the bag. Two days later, on the road to Aix-les-Bains, over the Col du Luitel, Gaul launched the greatest comeback since Lazarus, while Gém suffered the biggest betrayal since Judas. Gaul reached Aix-les-Bains more than fourteen minutes up on Gém, whose team-mates Jacques Anquetil and Louison Bobet had somehow found themselves in positions where they were unable to render aid to Gém. Gaul was now just 1'07" off the new maillot jaune, Italy's Vito Favero, and twenty-eight seconds off Gém, who had slipped to second. With one more time trial to come Gaul - who had shown he was more than just a climber by beating Anquetil in that Tour's first contre-la-montre and then scorched up the Ventoux ITT - now held the whip hand and it was his Tour to lose. And he was far too strong that year to let that happen.

Finally, there's Alfredo Binda and one of the loveliest stories about him comes from Herbie Sykes in Maglia Rosa and concerns a conversation that reportedly took place on a train travelling from Marseilles to Milan in the spring of 1923:

- You know that if he comes back home we're in big, big trouble? You know that, don't you?
- Don't concern yourself Tano. His brother told me he's doing well for himself in Nice - he's winning and earning a lot of money. Anyway, he's just a trumpet blower from Varese.
- That's right. And if he comes back he'll be blowing his horn all right. It'll be the end of us all.

Tano, he was Gaetano Belloni and his travelling companion was his great friend and rival, il Campionissimo, Costante Girardengo. The trumpet blower from Varese, he was Binda. And return to Italy he did, in the autumn of 1924, with the aim of picking up a 500 lire prime in the Giro di Lombardia for the first rider to crest the Madonna di Ghissalo. The following season Binda was wearing a Legnano jersey and, bossed by the brilliant Eberardo Pavesi, won the Giro d'Italia and the Giro di Lombardia. Four more wins in the corsa rosa followed, as did three more wins the race of the falling leaves, three wins in Milan-Sanremo and three world titles. Belloni had got it right, Binda really was the end of all of them.

As well as three decks of cards (I haven't seen the women's deck, it's due to launch shortly) McLeman's Pro Cycling Trumps business also offers personalised digital images or prints - you too could have your own Trump card - and a selection of posters of individual cards or all of them. But, for me, the most beautiful extra offered is a selection of button badges featuring some of the images from the cards. It's my birthday this year and if you really want to buy me something nice, those badges are the perfect gift. Every cycling fan should have a set. 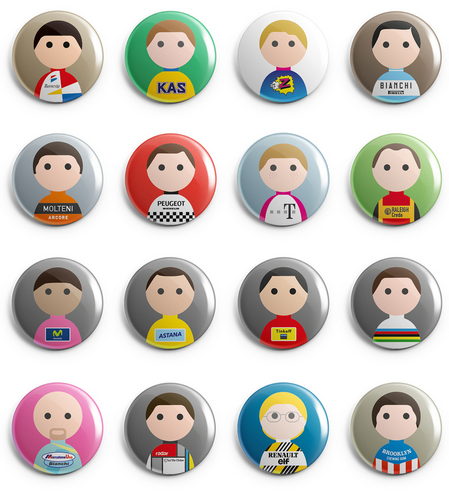