Arthur Linton: The Forgotten Man of the Hour

A new play about Arthur Linton and Choppy Warburton offers an opportunity to consider some of the myths associated with a cyclist who was putting Wales on the cycling map a century before Nicole Cooke came along.

Share All sharing options for: Arthur Linton: The Forgotten Man of the Hour

Aberdare. Today. Twins Jimmy and Jenny are celebrating their eighteenth birthdays. Jenny works in Boots in Ponty but dreams of Paris and the catwalk. Jimmy plays computer games in his attic and dreams of honour and dignity. When Jimmy's attic collapses his world is turned upside down, for in the rubble is an old Gladiator bicycle and a strange man in Victorian underwear. The ghost of Choppy Warburton - the Svengali of cycling in the 1890s, feared and respected in equal measure on both sides of the English Channel - is seeking redemption and has returned to Aberdare, the Welsh mining village that was home to one of his greatest riders, Arthur Linton. Soon Jimmy is reliving Linton's legendary ride in the 1896 edition of Bordeaux-Paris, from the confines of his collapsed attic.

That's the plot of Gladiator, a new play from Welsh playwright Laurence Allan which is currently touring Wales (for dates, visit the National Theatre of Wales site). It joins Roland Smith's Pedal Pusher and Maxine Peake's Beryl in recent attempts to put cycling on the stage and affords us an opportunity to consider some of the myths associated with two of the men whose story it partly tells: the Welsh cyclist Arthur Linton and his trainer, James 'Choppy' Warburton. 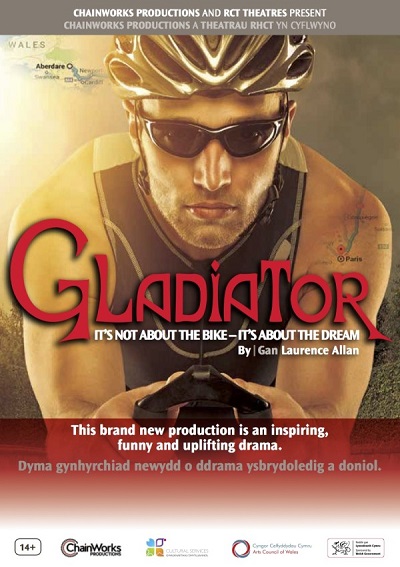 Arthur Linton's cycling successes were mostly forgotten until the 1990s when - in 1997 - an IOC report, Historical Evolution of Doping Phenomenon, suggested that Linton was the first athlete to die as a result of doping. That was followed by Dr Gary Wadler, who muddied the waters not inconsiderably by suggesting that Linton had died during the 1886 edition of Bordeaux-Paris. Some did their best to set the record straight, correcting the errors of fact in Wadler's claim - there was no Bordeaux-Paris race in 1886 and Linton actually died two months after sharing victory in the 1896 edition with Gaston Rivière - and in the years since, while many have repeated the myth (even embellishing it and putting Linton in the Tour at the time of his death), others have worked to try and find the truth about both Linton and Warburton, most notably the late Gerry Moore, whose Little Black Bottle tells the stories of both men. And while, for the most part, Linton's trainer Choppy Warburton is still considered the Michele Ferrari of his age some - such as Moore, and Peter Nye - are trying to show that the secret of Warburton's successes may not have been down to doping and are giving more and more credit to his innovative training techniques.

Moore, though, inadvertently contributed to perpetuating an alternative myth about Arthur Linton, the myth of Linton's Hour:

"On the 27th May that year [1893], at a race meeting at the Harlequins Sports Ground in Cardiff, Arthur Linton made history by breaking all Welsh records, from five to twenty-two miles, including the unpaced world hour record, with a distance of 22 miles, 1,510 yards [36.786 kilometres]. The previous world record had been established by Frenchman Henri Desgrange sixteen days earlier at the Vélodrome Buffalo in Paris. But the celebrations were short-lived, as the National Cyclists Union (NCU), the sports ruling body at the time, refused to ratify the distance as a world record for reasons now lost in time. Perhaps the track size had not been officially measured and certified, or an officially recognised observer had not been in attendance. Whatever the reason, Desgrange still held the record."

The claim that Linton broke Henri Desgrange's Hour record is today much repeated, from Wikipedia through to the BBC. With Allan's new play about Linton hitting the stage, it's time to consider the truth behind the myth.

At nine-and-a-half minutes to four on the afternoon of Saturday, May 27, 1893 - sixteen days after Henri Desgrange had set the first officially recognised mark for the unpaced Hour record - the twenty-four-year-old Arthur Linton set out on his mythical hour, riding round and round the 440 yard cinder track in Cardiff's Roath Ground, home to Harlequins. Linton's splits for the ride were as follows:

At the end of his Hour, Linton had covered 22 miles, 1,510 yards. At 36.786 kms, that was 1,461 metres further than Desgrange's 35.325 kms. And yet, today, in the UCI's official list of Hourmen there is no mention of the Welsh cyclist. Did Linton really beat the master mythologizer Desgrange's Hour, only to be denied the record by officialdom?

Of course not. For not only was Linton's not the fastest Hour ridden at the 'Quins' ground that Saturday afternoon - England's FJ Osmond later covered 23 miles 1,260 yards (38.167 kms) in an attempt on the English record - unlike Desgrange's Hour it was not ridden without pace: Linton had available to him a team of nine pacers (JA Metcalfe, E James, J Thomas, F Meredith, E Jenkins, S Linton, E Kennard, RO Dowdeswell, and F Grainger) who each aided him for half-a-mile (two laps) at a time. Linton's ride was a Welsh record, beating Thomas's 22 miles and 11 yards (33.806 kms) set in Newport on May 1, but it was not a world record. And most certainly not a world record for the unpaced Hour.

In the century and more since Desgrange's Hour in 1893, the cycling world has done its best to forget that there ever was another version of the Hour. And yet between the 1870s and the early years of the twentieth century the unpaced record survived in the shadow of the other Hour, the paced, first set behind behind men mounted on high-wheelers or horses, then paced by multi-cycles and finally caught in the slipstream of ever faster motor-cycles. In 1909 Paul Guignard - riding behind Franz Hoffman who was mounted on a three-cylinder Anzani - pushed the paced Hour above 100 kms at a time when the unpaced Hour had reached 41.520 kms, the French star hitting a dizzying 101.63 kms on the Milbertshofen track in Munich, a 660 metre oval that suited the high speeds of that era's stars of paced racing.

After Guignard the paced Hour fell out of favour with the UCI. Léon Vandersuyft took it out of retirement in 1924, clocking 107.710 kms on the Autodrome de Linus Montlhery and the record enjoyed a final Indian Summer, Vandersuyft having a brief rivalry with Jean Brunier and the pair pushing the record up to 120.948 kms (Brunier) by the end of 1925. Three years later Vandersuyft pushed the record out to 122.771 kms in the last Hour of the paced era.

Before its demise, though, the paced Hour shone. Reliable statistics for it are hard to come by but the details I've been able to collate show that there were at least nine records set in the 1880s, 40 records set in the 1890s, and another 24 set in the first decade of the 1900's. In that time there were a total of just six successful attempts on the official Hour record, with maybe another six in the years before the ICA took charge. In an age when records mattered, the paced Hour was the real star of the moment.

While Arthur Linton's 1893 ride in Cardiff was well off the mark for the world record (to the best of my knowledge the paced Hour would have been held by Jules Dubois when Linton made his ride, and stood at 39.928 kms) the cycling star from the valleys of south Wales did eventually write his name into the Hour's record books. For all of one day in August 1894 Linton was the reigning paced record holder, having covered 41.949 kms on the boards of the Buffalo track in Paris, only for Dubois to ride 43.333 kms in Bordeaux the next day. Later that same year Linton took another tilt at the record, in Bordeaux, reclaiming the record with a distance of 45.433 kms. (At this stage, the unpaced record stood at 38.220 kms.)

Fittingly, at the time of Arthur Linton's death in July 1896 the record was held by his brother, Tom, who had ridden 49.893 kms in Catford, London a fortnight before his brother's demise.

That Linton's 1893 Hour is just another myth should not detract from his two successful attempts on the paced Hour, where he was beating real stars of the day, men like Dubois (who also set a record for the unpaced Hour), Émile Bouhours (winner of Paris-Roubaix in 1900) and Lucien Lesna (who was among the favourites for the inaugural Tour de France before he suffered a career-ending leg injury in the infamous Paris-Madrid motor rally that took place a few months ahead of the Tour). Perversely, though, those four record-setting rides are for the most part overlooked, especially so by those who repeat the claim that Linton beat Desgrange's Hour. Even in the UK, Linton - along with about a dozen other British riders who inscribed their names in the paced Hour's record book - is the forgotten man of the Hour, lost in the shadows of Graeme Obree and Chris Boardman. A man who is remembered for something he did not do and not given the credit for the things he did.