A cycling novel that rights the wrongs of the Armstrong era.

Share All sharing options for: High Road, by David Chauner 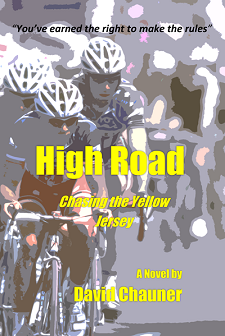 Title: High Road - Chasing the Yellow Jersey
Author: David Chauner
Publisher: David Chauner
Year: 2015
Pages: 249
Order: DavidChauner.com
What it is: A noughties-set cycling novel in which our American hero must face down the dastardly French, who will stop at nothing in order to win the Tour de France
Strengths: Not all the twists are as predictable as you might think
Weaknesses: Everything is dialled up to eleven

David Chauner's High Road - Chasing the Yellow Jersey opens in a hospital room. A quarter of a century before that one. Here, a twenty-something American cyclist faces the end of his cycling career following a crash in the Tour of Britain. Twenty-six years later, the nineteen-year-old son of that American cyclist gets a seat in America's hottest cycling team, bossed by a former team-mate of his father. Five years later - in a post-Festina-like new millennium - the kid's leading the team in the Tour de France. Standing in the way of Kurt Dufour - our all-American hero - is France's Jacques Poulain, five-time winner of the Tour, all back-to-back, and the man aiming to be the first to six.

The first person to six Tour wins? Yes, that's right, the first to six. Lots of people want to rewrite history and with High Road that's just what David Chauner has done, wiping out everything that happened in the era of Lance Armstrong and re-writing it with a French villain and an American hero. Or, better still, multiple American heroes, for as well as our morally upright anti-Armstrong on the bike we have an American reporter who refuses to turn a blind eye to the deceit going on under her eyes and determines to expose the cancer at the heart of cycling.

What's interesting about Chauner trying to wipe away the stain of the Armstrong era - the stain of cheating athletes and a complicit American media all too happy to cheer on one of their own - isn't so much the fact that he actually does it, but how he does it. First consider our media heroine, Katherine Anderson, a chain-smoking, jaded, thirty-something hack who can't rise much beyond tabloid TV and is caught in flagrante delicto in the back of a TV van right as our hero is riding into the yellow jersey. You almost get the feeling that Chauner isn't quite a fan of a less-than-fawning media and so writes Anderson as a character you're not meant to actually like.

Or consider the villains of the piece: the French. Chauner, you feel, really doesn't like the French. Three pages in we've got a cheating frog bastard (Chauner's words, not mine) and the whole novel twists on Dufour's on-the-bike rival, Jacques Poulain, and his sponsor, Jérôme Garnier, who will stop at nothing to ensure victory come Paris. In between we learn that wimpy Frenchmen don't do firm handshakes, Kurt's friend tells him to go "kick some French ass", and Poulain is - wait for it - arrogant. Worst of all, I think, is that far too many of Chauner's characters refer to Poulain simply as "the frog" throughout High Road, Chauner definitely travelling the low - and cheap - one when it comes to France and the French.

What, do you think, could be driving this Franco-phobia? Consider, for a moment, the character of Jérôme Garnier. If Jacques Poulain is a rather obvious substitute Bernard Hinault - le blaireau recast as a foal - then Garnier is an ersatz Bernard Tapie: a too-rich French industrialist who knows that everything has a price and all you have to do is offer the right sum to buy anything, even victory. Despite being set in the first year of the new millennium, High Road is very much a book of the 'eighties - the era of Greg LeMond versus Bernard Hinault and Laurent Fignon - Chauner mining that decade's Tours for raw material (spotting the references is one of High Road's pleasures, from Dufour coming good in a time trial at the Giro d'Italia ahead of the Tour through Garnier trying to recruit our American hero during a rest-day in l'Alpe d'Huez).

This is history re-written not just to excise the Armstrong era, but also for cycling fans who still can't quite get over Bernard Hinault not delivering Greg LeMond victory on a silver platter in the 1986 Tour. And for those who believe that the French were driven by anti-American sentiment in their quest to expose Armstrong's cheating and bring him down.

The novel's plot builds quickly through Kurt Dufour's back story. While he is an anti-Armstrong he does bear a passing resemblance to cycling's own Lord Voldermort: Armstrong escaped death, Dufour escaped the death sentence, having been tried for the murder of a girlfriend but found not guilty. That court case leads to the nineteen-year-old Dufour taking up cycling and turning pro. Lickety-split quick we're up to the meat and two veg of the novel, the Tour de France, Chauner not hanging around with any of the foreplay and jumping straight to the action and the Tour's final week in the Alps:

"Kurt Dufour, in the role of noble challenger, had shadowed Jacques Poulain with tenacity worthy of the most determined underdog. In second place overall, having conceded only one minute and thirty seven seconds to Poulain, Dufour's refusal to give in across the north and west of France, through the Pyrenees and in the straight-up time trial to the Puy de Dome summit, had energized his own GTI squad and others in the peloton as well. With each day, as Dufour and his loyal équipiers met or matched everything Poulain and Comtec could serve up, interest in the Tour reached a new level, and Poulain became increasingly more agitated and sharp with the press. Last night, with as close to genuine bravado as he could muster, Poulain had promised the press that he would bury Dufour on the way to L'Alpe d'Huez."

Digging deep into his suitcase of courage Dufour takes the yellow jersey on the Alpe and we enter a murky world of doping, race fixing, murder and mayhem. After the Alpe, we're into Kurt Dufour's war, the world against the American:

"Don't forget that we're in France and that Poulain is a Frenchman and he has to win one more. Kurt's a fresh face - and a welcome one at that - but our fight will also be against the system...the Tour organisation, the press, a ruthless corporation that has its hands in the pockets of the sport..."

With blurbs from Phil Liggett, John Wilcockson and Frankie Andreu ("likely to become a best seller", "a real thriller", "a realistic look at the Tour de France from all angles") Chauner - a former US Olympian and organiser of the Philly Classic - is a man who knows his way around the peloton. For some - as with Freya North's Cat - spotting the real person behind an invented character will be one of the pleasures of High Road. Who, for instance, do you think this could be:

"He was the undisputed English-speaking authority on professional cycling, having covered the Tour and most of the other top races for nearly two decades. During all that time, he had moved in the innermost circles of the sport, exposed to the scandals, the tragedies, the dirt. But Sterling made light of such things. He was an expert at creating the positive spin, in defence the sport as he saw it - a tough, no-nonsense business that created many heroes and provided the public with unforgettable moments of drama and excitement."

Outside of the in-jokes, does High Road work as a novel? If what you're looking for in a novel is a plot-driven pot-boiler with everything dialled up to eleven then yes, it works. The characters are cardboard cut-out and you don't get to invest in them emotionally but the plot is racey enough and the writing pacey enough to keep you turning the pages until you get to the grand denouement as the Tour races into Paris. A stage summed up by race commentator Phil Sterling with a line that really does capture the essence of the whole novel: "In twenty years of covering the Tour de France and cycling races all over the world, I must say there has never been a story quite like this."