Share All sharing options for: Hinault, by Ruben van Gucht 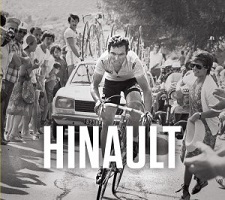 Title: Hinault
Author: Ruben van Gucht (with a foreword by Bernard Hinault and an introduction by Philippe Brunel, translated by Rebekah Wilson)
Publisher: Bloomsbury (by arrangement with Cannibal Publishing)
Year: 2015
Pages: 207
Order: Bloomsbury UK | US
What it is: The professional career of Bernard Hinault in words and pictures
Strengths: An elegant mix of words and images as befits one of the most respected champions in the sport
Weaknesses: Low on analysis, high on emotion

When the twenty-two-year-old Bernard Hinault won his first classic - Gent-Wevelgem, in April 1977 - it was possible for cycling aficionados to shrug it off with a cynical 'So what?' When, five days later, the Breton won his second - Liège-Bastogne-Liège - they had to sit up and take notice. Six weeks later, on the pre-penultimate stage of the Critérium du Dauphiné Libéré and with Hinault in the leader's jersey, he had them on the edge of their seats:

"On top of the Col du Porte, triumph is within reach: just descend to Grenoble and then conquer the Bastille. Behind Hinault, Cyrille Guimard is keeping a close eye on the time difference. At the top, the gap is one minute and twenty seconds. A safe margin.

"Nothing could be further from the truth. Hinault swoops down into the valley like a falcon. Mid-dive, things go wrong. French cycling fans skip a heartbeat when, at the fourth bend, which swerves 90 degrees to the left, things go completely wrong. There's the squeak of breaks, a loud curse, a cloud of dust and suddenly the yellow jersey is nowhere to be seen. Disappeared off the radar. The French television reporter can barely keep his cool. A few fractions of a second later the camera shows the ravine down which Hinault has tumbled. Nearly vertical and several metres deep. Miraculously, the Frenchman's fall is broken by a tree. Dense foliage as a vital safety net for a dive with potentially dramatic consequences." 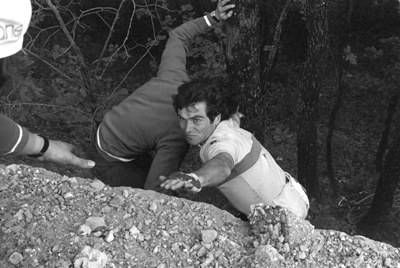 Hinault's victory in 1977's Dauphiné Libéré should - many believed - have seen him go into that year's Tour de France, but Hinault and his directeur sportive, Cyrille Guimard, had no intention of listening to the many and stuck to their own plan: Hinault would not make his Grand Tour début until the following season, and he would do it in Spain. There, at his first attempt, he took the win.

The form honed in the Vuelta a España helped Hinault win the French national championships and it was the French tricolor jersey he sported when he started his first Tour. There he duelled throughout with Joop Zoetemelk, prevailing in the final time trial and joining that illustrious club of débutante Tour winners.

A year later Hinault and Zoetemelk were duelling again and this time the Dutchman raced Hinault all the way into Paris:

"Ber-nard Hi-nault! Ber-nard Hi-nault! The crowd roars its support for the pursuer as he streaks past. The yellow jersey wearer himself takes up the gauntlet. He cuts his losses; tactics and calculations go out of the window. They come together further along the avenue. A spectacle in the traditionally soporific final stage. Hinault and Zoetemelk, first and second in the standings, in an old-school showdown. A pair of rivals that tower over the rest of their fellow riders. Unheard of suspense on the cobblestones in the shadow of the Arc de Triomphe. The peloton is stunned. The will to respond is there but the power to respond has drained away at the end of a gruelling Tour. In the front, bitter rivals join forces. An unforeseen, unexpected and unprecedented understanding at the critical moment. The sprint to win is Hinault's crowning masterpiece. And the peloton? It simply falls short."

By the time the first Classics' Season of the 1980s came around Hinault's palmarès included his wins at Gent-Wevelgem and Liège-Bastogne-Liège as well as La Flèche Wallonne and the Giro di Lombardia. 1980's Ardennes' Classics brought Hinault one of his most famous victories on a day that Liège-Bastogne-Liège became Niege-Bastogne-Niege, a day that recalled the hardships endured by Eugène Christophe in 1910's snow-bound Milan-Sanremo.

"The farmer leaves his tractor in the cowshed out of necessity, a dog crawls back into his kennel with his tail between his legs, and everywhere the shutters are down. Only wolves and bears are out and about. And riders. In the white solitude a group winds its way through snow-covered hills and valleys. They've forgotten they're riders, now it's just a matter of survival. All that matters is pedalling and continuing to pedal, eating and following the tracks of the cars. Stop and think and you're a goner."

Hinault followed his Ardennes success with his début at the Giro d'Italia where - as with his début Vuelta and Tour - he took the final victory. The Giro-Tour double had to wait, though, a knee injury leading to Hinault withdrawing from the Tour when the race hit the Pyrénées. Hinault went home to lick his wounds. He returned in August and claimed the Rainbow Jersey of World Champion.

When the 1981 Spring Classics came round, Hinault had a point to prove, critics to silence. But first, some fun.

"The Dutch beer classic isn't a real classic in the early 1980s. Herman Krott, the spiritual father and organiser of the Amstel, only occasionally gets a couple of big fish on on the start line.

"In 1981, the Amstel Gold Race is fifteen years old. A star rider would be welcome to mark the occasion, Bernard Hinault seems to be just the man, However, top cyclists don't particularly fancy a day of twisting and turning in Dutch Limburg. Not even Hinault. His preference is for the Tour du Tarn. Yet in the end he goes for the Amstel, nicknamed the dosh race. The reason for his presence soon becomes clear: show up in exchange for a tidy sum. It's a tried and tested formula in the otherwise stingy Netherlands."

Through fog banks the peloton ambled for most of the day, a sacrificial pair of breakaways injecting some semblance of excitement into a race that came down to a sprint, which Hinault won - more than justifying the fistful of francs Krott had bought his participation with.

Win followed win through 1981 and into 1982. Paris-Roubaix. The Dauphiné. The Tour. The Giro. And then Hinault returned to the Tour.

How often has the man wearing the maillot jaune won on the Champs Élysées? Twice. And both times it was Bernard Hinault. (There's another dozen occasions where the race leader won the final stage but let's not spoil the story here by getting into that.)

"When the peloton rides into Paris a few days later, Hinault hasn't forgotten the criticism of his racing style. Stubborn and ambitious, he feels the need to dot finish with flare. The 69th Tour de France ends in the same way it began: with an Hinault win. On the Champs-Élysées, he does things differently from three years earlier, when he was involved in a direct duel with Joop Zoetemelk. Hinault saves all his ammunition for the final sprint. A Belgian almost puts the kibosh on matters. Pol Verschuere steps on it in the final lap, in a naïve but brave attempt to stay ahead of the stampeding pack. Verschuere flounders barely 100 metres from an unforgettable triumph. Bernard Hinault sprints up and over the Belgian and lets his legs answer the critical voices that denounce his racing style. Noticeably absent in the sprint melee is Sean Kelly, who nevertheless wears the green jersey. He passes up the highly coveted victory on the Champs Élysées. A manoeuvre that feeds rumours. Rumours that Hinault asked Kelly amiably but insistently not to sprint in order to keep the yellow jersey wearer's chances intact." 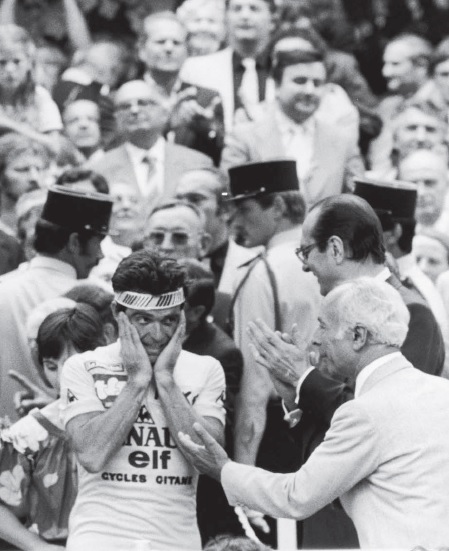 1982 was the pinnacle. Hinault's third Tour, his second Giro, his first Giro-Tour double. The fall began in Spain the following year where once again Hinault won, but at a price: all was not well in his knees. Surgery was necessitated and most of the rest of 1983 was wiped out. Hinault's return in 1984 saw him soundly beat in the Tour. Come the autumn, Hinault showed there was life left him in yet, adding a second victory in the Giro di Lombardia to his record.

Italy proved to be good hunting ground for Hinault. As he proved the following year when he sealed his third maglia rosa.

"No matter how much the organisers plan the route to Moser's advantage, how hard the tifosi push on steep mountain slopes and how many bonus seconds he gathers along the way, he can't manage to catch up with Hinault. Some 4,000 kilometres after the start in Verona, Hinault mounts the top step of the podium at the finish in Lucca after around three weeks of exerting an iron grip and tight control. Hinault doesn't get into trouble once along the way, and following his victory in the Tour of Lombardy, receives a second confirmation of his return to the highest level of cycling." 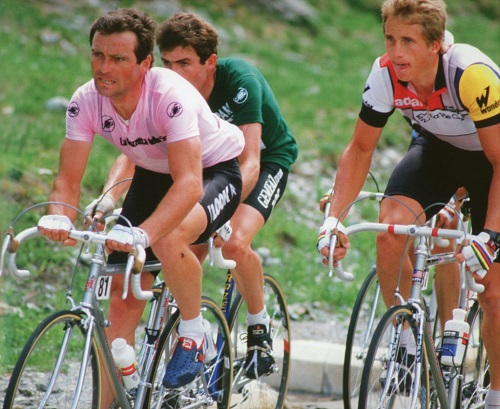 The Giro was followed by Hinault's fifth Tour de France win and his second Giro-Tour double. But victory in the Tour came at the price of a promise: Hinault would not race his final Tour in 1986 to win, but instead to help his American team-mate Greg LeMond take the honours. Whether that promise was kept is disputed.

"On the final climb to Alpe d'Huez, the pair are still together and apparently on friendly terms, although there's nothing remotely friendly about it. The LeMond-Hinault battle is fierce, not for wimps. Hinault drives towards the top, seeming to take LeMond in tow, and capturing French hearts as he does so. Adding some extra nobility to his heroism by means of a manoeuvre that's not what it seems. The champion who sacrifices all his chances for his upcoming young teammate But that's not what Hinault's thinking. He's hoping to see cracks appear in the American's shield. Cracks that will bend and eventually break. LeMond's having none of it and resists. At the finish there follows a short play can only be categorised as historic. Hand in hand over the line." 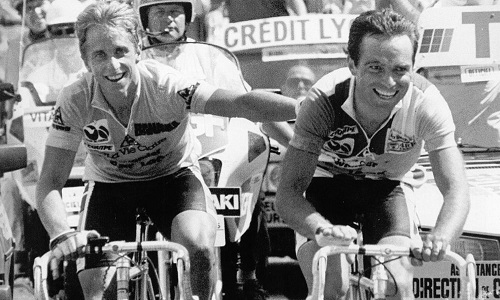 It didn't end there but it should have, the last - and one of the most enduring - images of the patron. True to his word, Hinault hung up his wheels at the end of the season.

Across twenty chapters and mixing words and images Ruben van Gucht paints an elegant portrait of Bernard Hinault's professional career, tracking the Breton from his amateur years through to his retirement. Each chapter focuses on a key date in Hinault's career - for example, 19 April 1977, Hinault's first classic, Gent-Wevelgem - but also adds events from before and after (so, for example, the Gent-Wevelgem chapter also includes Hinault's first victory in Liège-Bastogne-Liège five days later).

Of the photos, there are more than enough rarely seen images to justify the expense. Some of the best are Hinault at play - hammering away at an accordion with Jock Boyer looking on, reading a newspaper on the ceremonial ride into Paris at the end of a Tour, along with a touching image of a beaming Hinault with his wife, Martine. Most are black and white, with colour images used sparingly, but effectively, Hinault resplendent in either the maillot jaune or the maglia rosa.

Bernard Hinault may not have had the hunger of the Cannibal, but he has left a legacy that fans of cycling feel more attached to. Merckx was a machine - half man, half bicycle - that only failed when his motor ran down. Hinault, he was human, more easy to relate to. His career had its highs but it also had its lows and - often times - it takes a dose of adversity for fans to actually understand what they are seeing, for fans to actually appreciate greatness. Merckx may have been the best, but Hinault will always be more loved.