Richard Moore pops into the Café to talk about Étape - which has just been released in paperback - and his forthcoming The Bolt Supremacy.

Podium Café: You came to the Tour de France in the 1980s - Channel 4, Robert Millar, Bernard Hinault and all that - and the idea for Étape was for you to talk about stages that are your personal favourites, so you confine yourself to the 1970s and onwards, modern cycling. They're stages you knew about, from watching them, from reading about them, even from reporting them. Is there one in there in among them all where what you thought you knew was turned on its head by what you found out when you started talking to people?

Richard Moore: Maybe to some extent José-Luis Viejo's from 1976, though only because his version differed so radically from the official accounts I'd read (and showed his win in a more positive light).

It was interesting to learn little details, like Jorg Jaksche's claim that Marco Pantani's win at Les Deux Alpes in 1998 might have had something to do with his traditional Italian race food, while Jan Ullrich was breaking his teeth on frozen Powerbars.

Also, from the same Tour, Bobby Julich's tale of the Tag-Heuer watch was one that I enjoyed.

RM: Yes, mainly on YouTube, so thanks to all those who have uploaded so much old footage. It has become an incredibly valuable resource.

Obviously watching it again helps to visualise it but you also spot things. Such as that stage to Les Deux Alpes: Julich told me that when Pantani jumped away on the Galibier he turned twice to look back at them. The first time to check where they were, the second to laugh at them. The camera didn't catch the expression on his face, it was on the wrong side, but watching the footage and pairing it with Julich's account really brought that moment to life. Which, given that it was Pantani, made it a little eery and unsettling.

It was also very poignant to watch him and the late José Maria Jimenez battling the elements and forming an alliance on the descent of the Galibier.

PdC: When I reviewed the book last year I suggested it was a mix-tape of greatest hits (Merckx, Hinault etc), album tracks (Chiapucci, Pelier etc) and b-sides (Nelissen, Viejo etc), some of which readers would be familiar with, some which they'll be hearing for the first time. Is there a particular story you wish you'd been able to cover, a bonus track you'd like some future edition of the book to include?

RM: Floyd Landis's ‘win' at Morzine in 2006 is an obvious one. There are loads, to be honest, including some very recent ones... the cobbled stage in 2014 would make a good chapter. But sometimes the longer you leave them, the better and more revealing they become because riders are no longer with the same teams, teammates or directors, and tend to speak more frankly. Cavendish, for example, discussing Aubenas in 2009, criticising Kim Kirchen for joining the break after Cavendish had said in the bus that morning that he was confident of winning. He wouldn't have said that at the time.

PdC: You model the book around an imaginary Tour of sorts, starting with a prologue time trial, ending on the Champs Élysées. You have climbers, sprinters, breakaway artists. You even have a rest day tale. But ... no team time trial. Are you among the many who wish this kind of stage would die and never reappear?

RM: Actually I like team time trials and did toy with including 2001, when Credit Agricole beat US Postal, though that story's been told a few times. It wasn't a conscious decision to exclude a TTT. I prefer them to individual time trials.

PdC: The 1976 Tour comes up a couple or three times in Étape. The two stories that you touch upon both involve favours being done to keep sponsors in the sport, other recent books have touched on how personal animosities between certain riders - or how team orders favouring one rider over another - impacted outcomes. Some of this was touched on by Geoffrey Nicholson in his classic The Great Bike Race: do you think it's time some enterprising UK publisher re-issued that book and modern fans got a chance to appreciate that 1976 is a bit of an over-looked classic in the Tour's history, for all that it tells us about the way cycling worked then, and still works now?

RM: It's absolutely time that book was re-published. William Fotheringham introduced me to it and I have one in my bag on the Tour now, though the pages are falling out. It's a brilliant book, ostensibly about a single edition of the race but really about the Tour itself.

PdC: You cover a lot of ground in Étape, in your introduction you talk about "extraordinary feats and diabolical deeds, heroism and deceit, farce and tragedy." I want to talk about the deceit. Not doping, let's park that one for know. But the deals, the favours for favours, the karma bank or whatever you want to call it. To me, this is one of the beauties of the sport, the part that actually almost justifies comparing cycling to chess on wheels. Do you think the modern peloton is as open about these deals as they were in the past - even Nicholson, writing in 1976, was aware of some of the deals done, and talked about them - or are fans today too judgemental to allow proper consideration of this side of the sport?

RM: It fascinates me, too, and it's covered a little in the chapter on the gruppetto: the deals and also the politics, which can shift all the time. In the book I tell about how, before a stage in the Pyrenees in 2010, Alessandro Petacchi visited Mark Cavendish in his team bus to plan how they, the sprinters, would ride the stage. Then Cavendish was dropped on the first climb and Petacchi promptly got his team to ride to try and eliminate him - they were rivals for the green jersey. Then there were the politics that affected a stage in 1992, when the animosity between Peter Post and Jan Raas meant their teams, Panasonic and Buckler, sabotaged each other and themselves. Deals are made and broken all the time. It's part of the game.

PdC: 1995. I remember that I had lost a lot of faith in the Tour in the 1990s - the Irish had stopped winning and the doping was getting a bit too obvious - but that 1995 Tour, I remember watching the day after Fabio Casartelli died and the way the peloton wheeled along at funereal pace and then, right before the finish, let the Motorola riders ride off the front, and I know everyone else was mourning a dead rider, but for me, that day proved that cycling still had something going for it, some code of honour or whatever, that it wasn't all a busted flush, there was still something worth believing in, even if it wasn't the actual racing. And then a few days later, when Lance Armstrong won into Limoges, pointing to the heavens, I was in tears again. So me, I appreciate you including that story in Étape. What's the general response been to you including Armstrong, more or less balanced than you expected?

RM: I haven't heard any negative comments about the fact that I include a couple of chapters that feature Armstrong, or that I interviewed him for this book. I set out my reasons for including him in the introduction, so maybe that helped put it in context. But to me it would have been absurd to exclude Armstrong and include certain others... or to pretend that he is not part of Tour history. He is.

PdC: As well as Étape coming out in paperback, you have a new book out this year, a follow up of sorts to The Dirtiest Race, this time looking at Usain Bolt and Jamaican athletes. Before getting you to tell a little about that book, what's your take on the state of athletics today, given the recent run of stories about doping: do you think the IAAF is up to the task of dealing with the actual problem or are they just dealing with the PR problem of these stories?

RM: I don't know enough about the IAAF but my impression, having spent a bit of time on the athletics circuit in 2013 and 2014, was that it felt a bit like cycling in about 2006 and 2007: as though a storm was coming. I think athletics has a tougher time policing itself without the team structure that cycling has, which I think has helped in trying to change the culture.

But even more concerning is Seb Coe, who is running for IAAF president. Coe doesn't inspire much confidence when he appears to be so dismissive of recent well-researched allegations and stories - all very reminiscent of certain former UCI presidents. The impression is that he's more interested in shooting the messenger than in finding out the truth.

PdC: The Bolt Supremacy then, your new book. It's about Usain Bolt and a whole lot more, yes?

RM: Yes, it's really about the place he's from, Jamaica, and the question: why are they so good?

It was kind of indirectly inspired by the 2012 Tour de France. Wiggins was asked daily whether he was doping, which was fair enough, but then it got a little ridiculous, as though journalists were playing to the social media galleries a bit. I went straight from the Tour to the Olympics, which was so sanitised in comparison, with Usain Bolt asked questions like: ‘Are you a legend now, Usain?' It was like going from one extreme to the other. I'm not a big fan of extremes. I think you rarely find the truth at the extremes.

But I became aware of a paradox, even a bit of hypocrisy on my part. Because I was very sceptical of Bolt and the Jamaicans despite knowing next to nothing about them. I was sceptical because I read Carl Lewis's comments and took them at face value; because I thought it very unlikely that this tiny Caribbean island could be so dominant; and because I looked at the dubious history of the 100 metres and concluded that Bolt was probably a doper.

But this was lazy, it wasn't based on any facts, and so it was potentially unfair. I don't think it's good enough just to make assumptions. So I decided to go there to at least try to find out what I could and learn a bit about the place and the people. The book is mainly the result of the six weeks I spent in Jamaica and the 60 interviews I did there.

PdC: Cycling-wise, what's next - I take it there'll be daily podcasts during the Tour, yes?

RM: Two podcasts a day at the Tour! KM 0 in the mornings, the regular show in the evenings. Tune in at thecyclingpodcast.com. 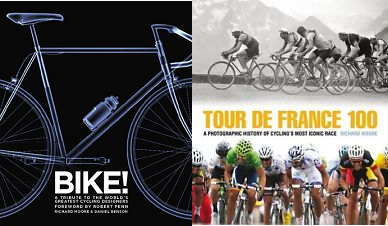 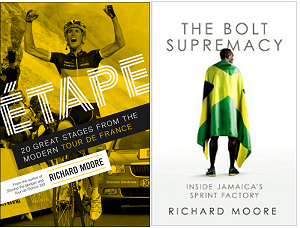 You'll find him online at richardmoore.co and on Twitter @RichardMoore73

You'll find reviews of Heroes Villains and Velodromes, In Search of Robert Millar, Chris Hoy - The Autobiography, Sky's the Limit, Slaying the Badger, Mastermind, Tour de France 100, and Étape - along with earlier interviews - on the Café bookshelf.

Our thanks to Richard Moore for taking the time to participate in this interview.