A Corinthian Endeavour, by Paul Jones

A history of the British national hill climb championships that gets to the heart of why we cycle and why some choose to climb hills.

Share All sharing options for: A Corinthian Endeavour, by Paul Jones 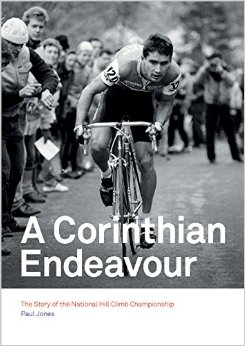 Title: A Corinthian Endeavour: The Story of the National Hill Climb Championship
Author: Paul Jones
Publisher: Mousehold Press
Year: 2015
Pages: 283
Order: Mousehold Press
What it is: An engaging history of the British national hill climb championship
Strengths: For Jones, the real attraction of hill climbing is the sense of community it creates and he is at his best when he is talking passionately about the heroes of the sport and the feelings it engenders
Weaknesses: At times it can feel like turning up for your first time trial, a strange other world that can close itself off to outsiders with in-jokes

"If there's one thing that highlights the difference between continental cycling and the insular version practised on this island, it's the juxtaposition of climbing theatres: Alpe d'Huez versus The Rake. One takes forty-five minutes, the other takes two and a half. There is no comparison beyond the obvious fact that both are stretches of uphill tarmac. And yet, they form a centrepiece to racing in their respective environments. Bike racing in any given place emerges out of the topography and climate. In France, it's mountains and fields of sunflowers. In the Netherlands, it's crosswinds and echelons across pan-flat flood plains. In the UK, it's endlessly undulating countryside with sudden, sharp and violent climbs."

In 1880 - when bikes were big and roads were rough - the Surrey Bicycle Club organised a climb of Reigate Hill, 2,640 yards (2.4 kilometres) with 420 feet of elevation gain. A GH Coleman was fastest of the 41 riders who finished. Thereafter, hill climbs quickly sprouted all over the country.

In 1887 - when the high-wheeled ordinaries were being overtaken by the diamond frame of the safety - came the Catford Hill Climb, which today claims to be the oldest continuing bike race in the world (world war and a big wind have disrupted it). The Australia-born Selwyn Edge - third in the first edition of Bordeaux-Paris four years later and after that a pioneer of the British automobile industry - was the event's first winner. Max Pendleton - father of jockey and retired Olympian Victoria - notched up a record eight wins in the event (1965-1969, 1971-1973), his grass-track skills giving him an advantage on the 700 metre greasy leaf-strewn slope.

Over time, in the UK, hill climbing came to find its place at the end of the road season, a mini eight week season developing that - today - culminates at the end of October with the national hill climb championship, the subject of A Corinthian Endeavour, by Paul Jones. The timing - greasy roads slick with fallen leaves - seems daft, wheel-spin an unnecessary adversary in the fight against gravity. But there's something about going uphill at the end of the season: the Italians still do it with the race of the falling leaves, Il Lombardia. The British, as Jones points out, they've got the race of the slipping wheels.

Great Britain's national hill climb championship has visited some wonderfully named climbs, such as Cat and Fiddle. Nick O' Pendle and Winter's Gibbet. Where do these names come from? Here's Jones on another of the national's favoured slopes, Barber's Hill, which climbs out of Llangollen in Wales and is properly called Moel-y-Barbwr:

"In keeping with the severity of the effort and the near death experiences of many of the riders, the hill is named after the town barber and schoolmaster, Thomas Edwards, who was by all accounts a bit quick to anger. He settled a full and frank exchange of views with his wife over whether to boil or roast a neck of mutton by cutting her throat with the tools of his trade, before running out the door towards Cross Lane. The schoolchildren saw Maria Edwards running around with blood spurting all over the place so raised the alarm. The barber ran across the open fields to the top of one of the many climbs overlooking the town. He was caught and hung on a gibbet at the top of Moel-y-Geraint, which has since been known as Moel-y-Barbwr."

Simply turning up proves that the stars saw some value in hill climbs, but they didn't always value them as high as others did. Here's Boardman:

"Hill climbs were a fun exercise and satisfying to tackle at that particular time, but I was always aware that being good at them was a very specialised ability of little value in any other arena. If there was a power to weight ratio uphill pursuit event, then this skill set would be similar!"

In 1998 the Cycling Time Trials council - organisers of the national hill climb championship - flung open their doors and, for the first time in the event's history, accepted entries from women (Nicole Cooke was fastest of those who entered). Five years later and progress was tearing along, with the inauguration of a separate title for women (Ruth Dorrington was first). The likes of Eileen Sheridan and Beryl Burton and Yvonne McGregor never got a shot at the title and you have to feel that the hill climb's story is the poorer for their omission.

Jones offers the women a chapter to themselves in A Corinthian Spirit, which largely features four-time champ Lynn Hamel (2008, 2010-2012). In that he agrees with Hamel when she says the media needs to be more proactive, write about the women and not just the men.

When I put a couple of questions to her, Maryka Sennema (2013, 2014) cut across an argument made by Jones in A Corinthian Endeavour about how new technology is threatening hill climbing, noting how her own club's internet forum helped introduce her to hill climbing in the first place, and that "the likes of Strava have helped to show many women that they are actually good enough to compete."

The big joke about the British time trialling scene is that the races take place at ridiculous o'clock on code-named drag-strip dual-carriageways. Hill climbing is different. Hill climbing has crowds. The shorter the hill - the typical one ranges from just under one kilometre to a little over three - the more dense the crowds packing it seem. Here's Jim Henderson (1998-2001, 2003) offering a description of riding through them:

"You're trying so hard, looking ahead, people are right in thick and I was riding at people to smooth out the bend and you know they'll get out of the way, but I had this sensation of riding through a tunnel of people all leaning forward. Faces that you know are coming past you, screaming something that you get snatches of and you're gone, and there's all this stuff going on and you can't concentrate on it because you're concentrating on your ride, turning the pedals - push, push, push, push - and I think I just felt like I was trying more than any time previously. [...] There is an awareness of something outside the race, but you are in the race and seeing through peripheral vision all the time - a face is beside you but it's close, and because you're going slower it's not like a road race or the track, you might be the fastest person in the national hill climb you you're still only going 15mph. So when someone is really close to you it takes a couple of seconds in hearing range. It's just a continuous noise, through people continuously and of different people saying different things."

On one level, it's possible to look at A Corinthian Endeavour and say it is the type of book for the type of person who'd ride the type of event Jones writes about. One for the cognoscenti, the testerati. And at times it is too much this sort of book, Jones speaking to others like him who know the delights of the British hill climbing season, offering race reports and witticisms that they'll appreciate but which don't always translate to a wider audience.

You could see A Corinthian Endeavour as being the perfect pairing for Michael Hutchinson's recent Faster, there Hutchinson focusing on the science side of time trialling, here Jones dealing with the human. Really, though, A Corinthian Endeavour is trying to be larger than that, it's trying to say something bigger. As much as it is a book about the British national hill climb championships, it is also a book about "the unifying and singular joy that comes from riding a bicycle." Here's Jones at his best:

"Time and space became suspended and only the journey and the moment became real, the gradual unfolding of the landscape and the utter serendipity of the world around me. This is the profound and realising capacity the bike has. In a world where we become steadily more insular and introverted, more virtual and in some bizarre paradox, ever less connected and not more so, cycling provokes a real and telling experience with the here and now. It provides the opportunity to see amazing things that you wouldn't have seen if you were doing anything else apart from riding your bike at that precise moment in time, moving through the continuous landscape of flux and change. Being on the bike for that long, getting further and further, creates a space in time where all of the things, the world of work and the petty worries you have, begin to melt away in layers until you are suddenly there in the landscape. Just don't expect to be able to explain the profound nature of the experience to someone who hasn't left the house."

The rest of the text is littered with occasional lines that cause you to pause: "The clock ticks audibly on the wall within the silence of reminiscence, the seconds so palpably less precious now, in conversation, than they ever were in the race." Give Jones a smaller canvas than seventy years of hill climbing champions and I think he is capable of astounding the reader.

And there is real humour, not just inside jokes, a quintessentially British kind of gentle humour. Vic Clark - three time national champion, 1946-1948 - takes Jones back to the days of his youth, when for a year and a half he was working in Coventry while his wife lived in Nelson, a hundred twenty something miles separating the two. Come Friday going home time, Clark would hop on his bike and ride across to Nelson:

"One weekend I took my tandem up there, on my own. Got somewhere near Stockport and there was an Army bloke thumbing lifts and nobody stopped for him, and I said, 'There's room for one on the back but you'll have to work for it.' He must have been a cyclist because he got on the back and I dropped him off at Burnley!"

"We'd be off all day, dropping into a café or pub late at night, sometimes nine or ten o'clock. There were no point in rushing home: there were only the wireless."

A Corinthian Endeavour, then, is a book that can appeal beyond its apparent immediate audience of British testerati, is not just for those with intimate knowledge of that quaint curiosity, the British hill climbing season, and can appeal to all who care about cycling, want to understand where it has come from and what it is that keeps it going on. For Jones, the hills and the champions who have reigned on them are the portal to the community spirit that is the true heart of cycling, present in the hearts of true cyclists.

You'll find an interview with Paul Jones on the Café Bookshelf.