A lavish dose of techs mechs. 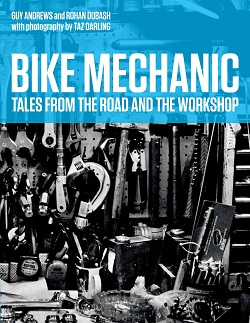 Title: Bike Mechanic - Tales from the Road and the Workshop
Author: Guy Andrews and Rohan Dubash with photography by Taz Darling
Publisher: Rouleur Books / Bloomsbury Publishing (UK) | VeloPress (US)
Year: 2014
Pages: 272
Order: Bloomsbury (UK) | VeloPress (US)
What it is: Practical tricks of the trade from the peloton's wrench monkeys
Strengths: The mix of historical anecdotes and practical tips of the trade makes Bike Mechanic more than just a reference manual
Weaknesses: If you're the sort who prefers to let someone else fix your punctures this probably isn't the book for you

"A soigneur can't really fuck up. I mean, how do you fuck up a massage? And even if you do mess it up somehow, it isn't going to cost them the race. But cycling's on TV and if something [mechanical] happens, it looks bad for us."
~ Kris Withington

Bike mechanics, of a kind, have been in the news rather a lot recently. Not for their pre- or post-race wrench monkey routines but for the heart-wrenching scenes of horror they have been involved in creating during races throughout the season. Neutral support - this year at least - has never seemed less supportive and (if you are Oleg Tinkov or Jim Ochowicz) never seemed less neutral. The truth is, though, that the neutral support mechanics are the unsung heroes of road racing. Team mechanics, their riders may from time to time remember to credit them or journalists looking for a different angle on a story might think to talk to them. But - by and large - neutral support goes unnoticed.

In Bike Mechanic - Tales from the Road and the Workshop Guy Andrews and his team of shutterbug Taz Darling and professional grease monkey Rohan Dubash offer up a chapter looking at life from inside neutral support vehicles, travelling with mechanics from Mavic and Vittoria at a couple of races and seeing how neutral support operates from the inside. 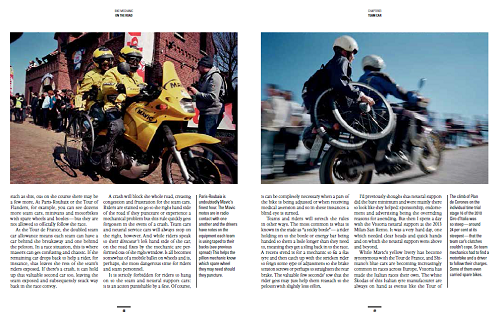 The area of most interest right now with regard to neutral support vehicles is the way they move through the peloton. This varies throughout a race. At one moment it can be compared to the elegance of "moving through a flock of birds or a shoal of fish" while at others the riders can appear to be like "monkeys at a safari park, they seem hellbent on swamping us." Like many who drive in the professional peloton, neutral support drivers can and sometimes do act like they are rally drivers, giving it lots of va-va-vroom: "Just a quick chat with a policeman to open the road and we're flying down a farm track at 140km/h. Frédéric pulls his seatbelt over his head (it's been fastened behind him to stop the alarm sounding). Through a village and down a hill, the car drifts from side to side...". Back in the peloton, it's sandwich in one hand, gear stick in the other and the steering wheel controlled by knees. But it's not just the drivers living it large: "From nowhere, a cyclist appears in the window at my right shoulder and, as Frédéric brakes, he uses our wing mirror to catapult his momentum forward. No-one else in the car seemed bothered. All in a day's work." Proper harum-scarum stuff. But par for the course in today's professional peloton.

What's not seen is the actual work neutral support does, or rather just how much effort goes in to providing the service they do. Watching on TV, all we see is a rider rolling to a stop, a neutral support mechanic popping in a new wheel and the rider pushing off again, all done at F1 pit stop speeds. Andrews and co offer a story of their neutral support driver spotting a rider with a puncture and immediately being able to identify what's required - "Campagnolo, rear, 11 speed!" - but really this is a story better told in a photograph: 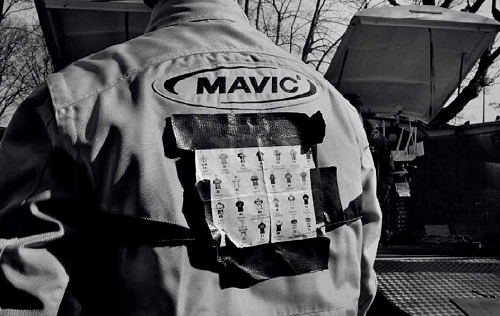 The life of a neutral support mechanic is just one of the behind-the-scenes stories told in Bike Mechanic, one of those rare cycling books that focuses not on the riders but on their entourage, here the men (and - certainly in this selection - they do all seem to be men) who keep their bikes on the road. There's general chatter about frame building and how various people got involved in the trade, but then we move on to specifics: the routine for cleaning bikes, life in the team car, the aforementioned guys who provide neutral support, life in the team truck and the service course etc. All of this behind the scenes colour leads up to the real nuts and bolts of Bike Mechanic: a guide to the tools and tricks of the trade for those willing to get a little bit of grease on their hands and try and maintain their own bikes to professional standards.

For me - as someone who knows how to take a bottom bracket apart but struggles to reassemble it - a lot of the best stuff in Bike Mechanic is the stuff I don't think about. Take tyres. When Andrews and co. interviewed Garmin's Kris Withington in 2009, they were getting 1,000 tubulars from Vittoria at the start of the season. That's for a team of 30 riders, with maybe 150 bikes, covering racing and training. In the Tour, they were getting through 60 or 70 tyres, the team leaders getting new tyres every day and their used tyres being handed down to other members of the team: "The best riders always get the new material, the best material, and the rest what's left," Withington told the authors. "Because we run three racing programmes, you'd run out of tubulars - especially if you're just pulling them off every day - so you have to be resourceful too." Some other numbers to help make your head spin: a team can expect to get through 25,000 bidons in a year. They can also get through 400 saddles, 300 chains and 250 pairs of pedals.

Once upon a time, Campagnolo ruled the roost when it came to supplying teams with kit. In the early 1970s Shimano entered the market, most notably with the Briek Schotte-bossed Flandria-sponsored squad that featured among its riders Walter Godefroot, Freddy Maertens and Michel Pollentier. Maertens often tells a story from the 1973 Worlds about some of the underhand double dealing that went on in what quickly turned into a war between the Italian and Japanese manufacturers. Andrews and co offer a less salacious but ultimately more interesting story of Shimano's entry to the market:

"Shimano was quietly ambitious and keen to learn more about road racing, so instead of making a PR fanfare to announce its arrival in Europe the firm chose to simply circulate a few groupsets and drop a small band of mechanics and engineers in at the deep end. The feedback took time. Shimano insisted on written reports from their representatives after every month of racing. One of the correspondents sending back information to the Sakai HQ was mechanic Hiroshi Nakamura, and he was clearly realistic about the components' limitations. 'My first impression of a European road race was one of complete mayhem,' Nakamura remembers. 'It was not uncommon for components, Campagnolo and Shimano, to break and I remember the beating that our Crane derailleurs took at Paris-Roubaix...'"

Shimano were not alone in listening to feedback from the teams they supplied, as another interviewee - Yoshiaki Nagasawa - notes:

"One day I suggested to them to modify the front derailleur cage shape by one millimetre so the chain shifts properly and doesn't drop. The Campagnolo mechanic looked at my suggestion and gave me a thumbs up. Two weeks later, it was out as a production model. Amazing, I always gave them my feedback, because they will use it. In return, Campagnolo gave me everything I needed at the races."

For someone like me, these historical anecdotes are among the best bits of Bike Mechanic. There's a wonderful interview with Yoshiaki Nagasawa in which he talks of arriving in Italy from Japan and working as an illegal, first with Sante Pigliaghi and then Ugo De Rosa, learning the trade, as a mechanic and then a frame builder and then taking that knowledge back to Japan where he built bikes for the Keirin circuit. The ubiquitous Dario Pegoretti takes us back to his roots and the need to make mistakes and learn from them. Yozo Shimano tells a funny story about getting Ugo De Rosa to build him a bike, which was duly delivered - with Campagnolo components.

All these tales - the historical anecdotes, the slices of life in the service course, team van or neutral support vehicle - are more than mere colour, they help to ground what follows in the practical experience of seasoned professionals. For what follows these tales is one of the hardest things in cycling to talk about: the tools you'll need in order to look after your bikes, and how to use them properly. Here, shutterbug Taz Darling's photography really comes to the fore ably illustrating Andrews and Dubash's words. 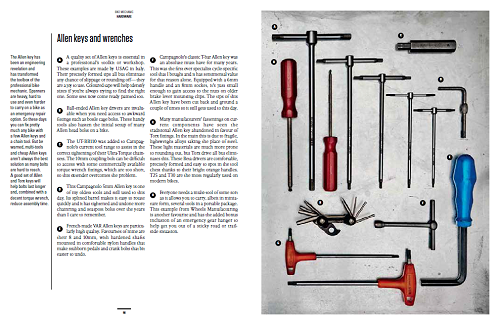 The tools of the trade... 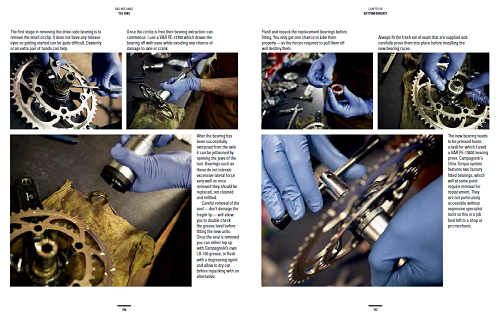 Darling's images - even when they seem the most mundane - are worth paying attention to, for in among all the geekery of Peanut Butter spanners and T-bar Allen keys and slip-joint pliars there are moments of humour: 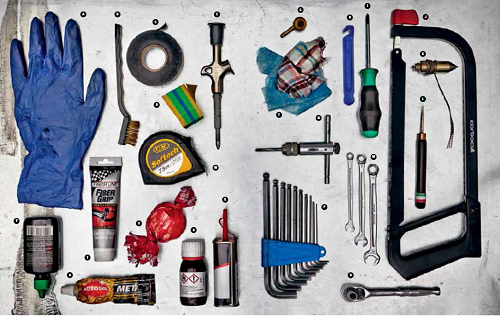 Darling's photographs are an essential part of Bike Mechanic. At times - as in the case of the tools of the trade - they can seem purely illustrative (belying their composition) but most of the time they tell their own stories, often times in lusciously dark b+w shots where people seem to be swimming in a sea of black ink or colour images that are so rich in contrast they could be black and white: 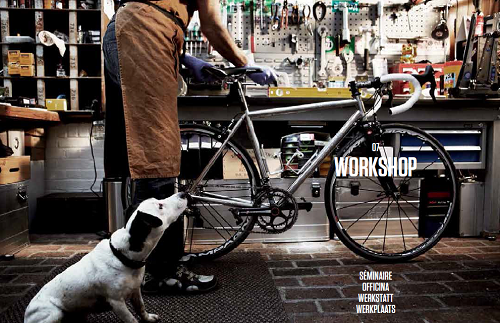 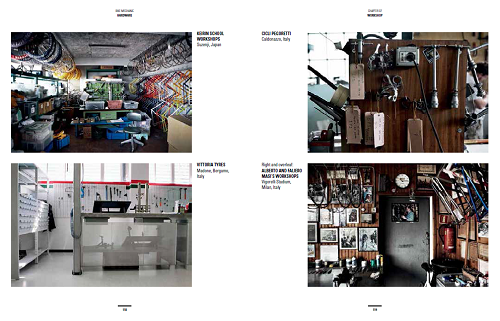 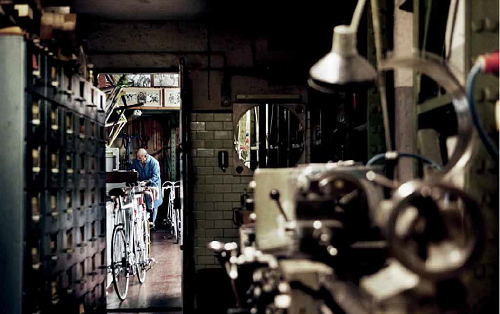 Bike Mechanic, then, mixes historical anecdotes with techs mechs tips of the trade, offering the would-be bike mechanic a solid grounding in what needs to be known, but also offering something to those happier to let others strip their bottom bracket and repack their ball bearings. As with all Rouleur-related books, the production values are high, making Bike Mechanic a book for the ages, a book to inspire and inform a generation of wrench monkeys. 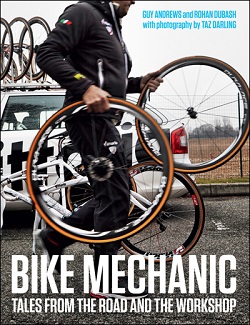 US and UK cover images