A Year In The Saddle, by Giles Belbin and Daniel Seex

Share All sharing options for: A Year In The Saddle, by Giles Belbin and Daniel Seex 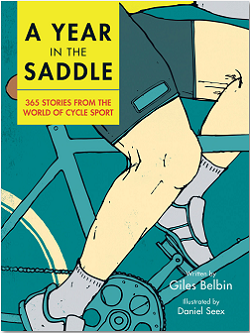 Title: A Year in the Saddle - 365 Stories from the World of Cycle Sport
Authors: Giles Belbin (words) and Daniel Seex (illustrations)
Publisher: Aurum Press
Year: 2015
Pages: 352
Order: Quarto
What it is: A cycling miscellany, with one story for each day of the year
Strengths: It's an eclectic mix of stories, some told from unexpected angles
Weaknesses: As always with these things you'll quibble over things left out and some of the things included

Among the things I share my birthday with are the anniversaries of the opening of Madison Square Garden1, the ending of the Boer War, the birth of Clint Eastwood and the death of Adolf Eichmann. Thanks to Giles Belbin and Daniel Seex's A Year in the Saddle2 I have learned that I can also add to the list of my birthday anniversaries celebration of the day in 2005 that Gino Bartali was posthumously awarded Italy's Medaglia d'oro al Merito Civile for his "wonderful example of great spirit of sacrifice and human solidarity." Me and Gino, eh, two peas in a pod.

Not unlike William Fotheringham's Cyclopedia - but running January 1 to December 31 instead of A to Z - A Year in the Saddle is a cycling miscellany built to be dipped in and out of. Let's do some dipping. 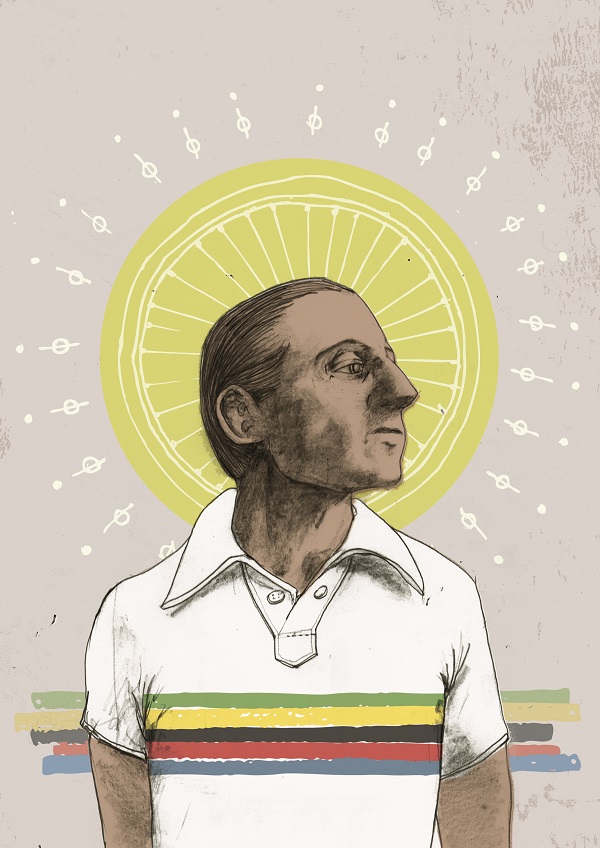 To this day Fausto Coppi remains one of cycling's greatest riders. He rode with grace and panache, a silky, smooth pedalling action belying the effort he put into cycling. His appeal was best summed up by fellow rider André Leducq, who described Copppi as riding like 'a great artist painting a watercolour'.

Coppi was born in 1919, in Castellania, north-west Italy. He developed his cycling legs early in life, working as a delivery boy, for a butcher. His first race win came in 1938 in the Castelletto d'Orbo-Alessandria. His breakthrough year was 1940, with a national title on the track, followed by a stage win and the overall victory in the Giro d'Italia; the first of five wins in Italy's national tour.

Despite losing some of his prime years to the Second World War, Coppi's palmares (list of races won) place him at the top table of cycling's greats. The early part of his carer was defined by his intense rivalry with Gino Bartali, which divided both cycling and Italy. Coppi won the Tour de France twice; holds the record for most wins in the Tour of Lombardy, triumphing on five occasions, four of them in succession; won Milan-Sanremo three times; and became world champion in 1953. He also held the hour record from 1942 until 1956.

Away from the bikes his life was beset by tragedy. Fasuto's younger brother Serse - a fellow cyclist who had won the Paris-Roubaix classic - died in 1951, after falling while sprinting to the finish line of the Giro del Piemonte. Later, Coppi faced the wrath of the Catholic Church for his affair with Giulia Occhini. Nicknamed Coppi's 'White Lady', Occhini had met the cyclist at a race and, despite both being married, they became lovers. When the story broke the two became embroiled in a national scandal. Even the Pope got involved, first telling Coppi to return to his wife and then later refusing to bless the Giro's peloton because of Coppi's presence.

In December 1959, having retired earlier that year, Coppi travelled to Upper Volta in Africa for an exhibition race. He returned complaining of feeling unwell and was diagnosed as having pneumonia. In fact, Coppi had contracted malaria. He died on the morning of 2 January 1960. Ten thousand mourners attended his funeral. 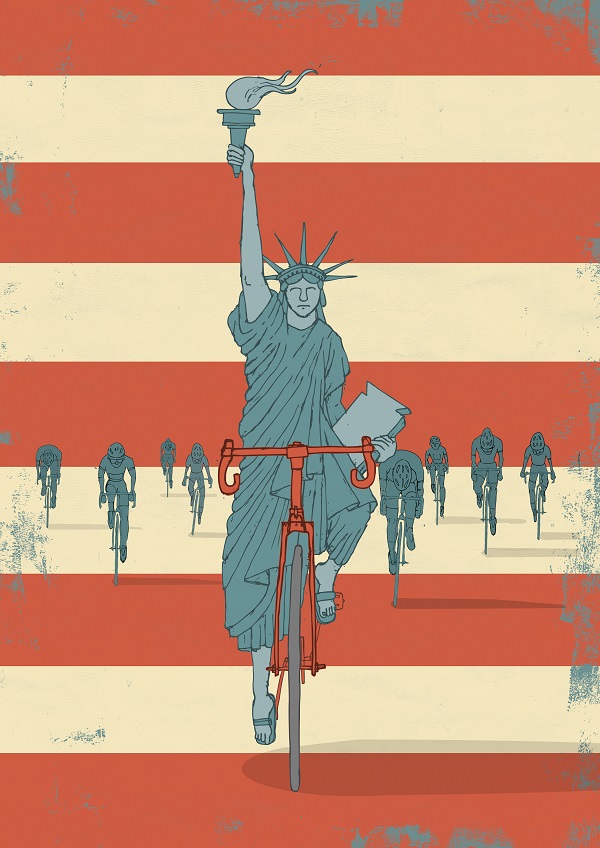 Six-day racing was first held at Madison Square Garden, New York, in 1891 when it was the very first event held in the now legendary arena. At first riders raced alone, with the only limit to the amount of time they could ride being stamina and their ability to go without sleep. That first race was won by William Martin, a professional who had earned his nickname, Plugger, because of his consistent and durable style.

By 1899 the format of the race had changed. With organisers concerned for the wellbeing of riders who, only too aware of the financial rewards on offer, were now pushing themselves beyond all reasonable levels of endurance, a rule was introduced stating that no individual could ride for more than twelve hours a day. (In 1898 the winner, Charles Miller, had spend 126½ hours out of that a possible 142 on the track - half an hour of that downtime spent getting married.) The ruling led to teams of two being formed and in 1899 the Garden hosted New York's first two-man six-day race.

Into the 1900s and the event grew in popularity. Soon six-day races were springing up in other American cities. Six-day riders were among the most famous and best-paid athletes in the States. Demand grew so much so that from 1920 New York hosted more than one race a year, attracting the celebrities of the day to the Garden to watch the action.

The last six-day meet in New York prior to the Second World war took place in 1939. Started by baseball star Joe DiMaggio, the race finished on 25 November with Cesare Moretti and Cecil Yates winning. Six-day racing returned to New York in 1948, but not at the Garden. It wouldn't be until 1961 that the event, dubbed by at least one writer the 'Mad Whirl', returned to its spiritual home. At the time it was hoped that it would be the first of many but any such optimism soon faded and the 1961 edition proved to be the last of the New York Sixes.

As with most of these things, there are the occasional factual infelicities (in the Six Day story above, Madison Square Garden actually opened in 18793, it was the New York legislature that brought in the rule limiting riders to 12 hours on the boards and Sixes were popular across the States before the 1900s with riders already able to spend the winter crossing the country from one Six to another). This, though, being a book to whet your appetite rather than satisfy it, you can live with this. The stories that catch your attention will send you looking for more detail.

So what's covered? Well, in January alone, A Year in the Saddle's wide range of topics takes you through the GP Sven Nys, the Bremen Six, Alfred Dreyfus, Helen Wyman, the Vél d'Hiv and more. Many of the stories told throughout the book are about races won (March gets several entries for Paris-Nice, April for Paris-Roubaix, July the Tour de France etc) and the births of deaths of various riders and other stars of the sport (men and women, from most disciplines of the sport). Some days being quieter than others you do get entries that raise an eyebrow (5 August: Tour de Guadeloupe joins UCI America Tour (2005); 6 August Oakley's Overthetop trademark is registered (2002)). Mostly, though, it's stories about names and races you'll recognise.

As well as the individual stories for each day, A Year in the Saddle offers the reader Daniel Seex's accompanying illustrations which, in their own right, are reason enough to want to pick the book up. They don't overpower the words and, unlike recent illustrated books such as P is for Peloton and The Modern MAMIL they don't feel like they're the book's raison d'être, they work in harmony with the text.