The Misfortunates, by Dimitri Verhulst

Share All sharing options for: The Misfortunates, by Dimitri Verhulst 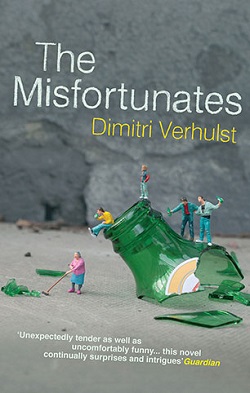 Title: The Misfortunates
Author: Dimitri Verhulst (translated by David Colmar)
Publisher: Portobello Books (UK) | Thomas Dunne Books (US) (Originally published in Belgium as De helaasheid der dingen by Atlas Contact)
Year: 2007 (translation, 2012)
Pages: 200
Order: Portobello (UK) | Macmillan (US)
What it is: A semi-autobiographical novel that confounds expectations of the misery memoir genre and serves up a slice of low life that's a thing of beauty
Strengths: Brutally frank and achingly tender
Weaknesses: The border between laughing with and laughing at is easy to cross without realisation

A few years ago the world of literature went through a vogue for what can best be called misery memoirs, rotten childhoods retold in all their gory glory. Some say its mass public appeal started with Dave Peltzer's A Child Called "It" but as a genre it started much earlier and has never gone away (in Ireland we were force-fed it in school, having to read Peig in the original gaelige). Its popularity is cyclical, with the economy: good times are good for misery memoirs, bad times are bad. I think it's a reaction against the general happiness brought about by apparent economic well-being, we have to have some miserable fucker bring us down by feeding us the literary equivalent of a chemical cosh.

The industrial production of misery memoirs reached its zenith in the second half of the noughties, just before Juliana Buhring co-authored Not Without My Sister, around about the same time as the global economy tanked. About the same time as Dimitri Verhulst's De helaasheid der dingen - The Misfortunates - was published in Belgium.

"We were poor, always had been, but we bore our poverty with pride."

That's how Dimitri Verhulst describes the extended Verhulst clan - Dimitri, his father Pierre, his grandmother Maria, and his uncles Karel (Girder to his friends), Herman, and Potrel - who reside in Arsendegem1, a town "that everything beautiful must leave or be destroyed." Telling the story of Verhulst's early life - the bits before and after the novel he's yet to write, the bits before and after the years when the State took responsibility for his care - the author serves up a series of vignettes, interlinked short stories. Tales from a life that offer a beginning and an end that mirror one and other and bits in the middle that join up the two. A novel, not a memoir. Fiction not fact. Narrated by a character who bears the name of the author and bears many similarities to the author. And who really is the author, telling stories of things that really happened to the author. Both a bit more polished than reality.

Brutally frank and achingly tender, Verhulst - the narrator - paints a warts and all portrait of his family. Here he is from early in the novel, when an aunt who has escaped the family and Arsendegem is forced to return with her daughter and two black eyes and in so doing reminds the Verhulsts of what it is she escaped from and what it is they are eternally consigned to:

Some have drawn a comparison between Verhulst - the author - and Roddy Doyle2. Around the time that misery memoirs really took off, they really took off in Ireland. It was the time of the Celtic Tiger and the Irish were getting happy getting rich - or thinking they were getting rich - and desperately needed a load of miserable fuckers to bring them back down to earth. Frank McCourt set the stage with Angela's Ashes, a piece of pure Oirishry, one of those ‘sure it was a hard life but weren't we happy with what little we'd got' confections that sought to put the fun into dysfunctional (and in so doing ultimately led to Mrs Brown's Boys - there's a lot to hate Frank McCourt for). And Roddy Doyle blossomed, particularly his Barrytown books and their associated films, which were good enough - acceptable enough - to be considered for Bookers and BAFTAs. Interviewed by Rosie Goldsmith in May 2014 for European Literature Night Verhulst explained why the comparison with Doyle is wrong:

"I started writing in the ‘90s - my début was in ‘99 but the thing I débuted with was written in ‘94 or something - and you had this wave of ‘alcohol literature' from the Irish3, it was very popular in Europe. I didn't want to publish this one [The Misfortunates], I kept this story for later. I wanted first to become a better writer because once you write it's done, you cannot do it again. But also, I didn't want to jump on this car of popular literature. But the thing was, later I realised no, it's stupid to compare it with Roddy Doyle and this Irish literature, because there you always have the comfort of the mother. The men were drinking and were giving their families miserable lives but there was always the mother. And she was not always loving her children in the perfect way but she was there, it was a resort of comfort. And I didn't have this. When I realised this, I could put these women away. And it's true, I am playing with the role of the women in the book. Because they are not really there. They are there to clean the vomit. It sounds a little bit rough but it was like that, when one of my uncles vomited again he just shouted the name of his mother and she cleaned it. So you have to do something with that in literature. You give these women a certain role where you start feeling ‘do they really like women?' or ‘what function do women have in these lives?'."

If it's misogyny, it's misogyny for a higher purpose, art. Whether that's a fair get out of gaol free card, you tell me. (There's a big box at the bottom of the page or you know where I'm at on Twitter.)

What, though, is any of this doing on a cycling website? Have I grown bored of poorly written and even more poorly researched stories of the professional peloton and decided to just write about whatever I'm reading this week? Nearly but not quite. For The Misfortunates is a cycling novel. In the same way, that is, that Alfred Jarry's Le Surmâle4 is considered to be a cycling novel5. In other words, it's not a cycling novel. But, as with Jarry, it has one key chapter that literary cyclists will want to read. A story of the Tour de France as the ultimate drinking game.

Drinking for the Verhulsts was not so much a way of life as a way of getting through life: "God created the day and we dragged ourselves through it." When a local publican stages a World Drinking Championships and Verhulst's uncle Herman wins, another of his uncles, Girder, gets the hump at having been excluded for being underage and so creates a rival event, a test of drinking strength to match the Tour's test of cycling strength.

Nineteen stages. Five kilometres per unit of drink. Ordinary beers for the flats. Trappist - 10% ABV - for the category four climbs. Water and milk for the descents. Wine red or white, tequila, mescal and whisky for the Aubisque and Tourmalet. All against the clock. With a yellow jersey for the winner. And polkadot and green jerseys for the climbers and the sprinters.

"This alcoholic parlour game was the best of its kind, no one had designed a better method to unveil the most talented piss artist to humanity. It was clear that soon, all over the world, people would be playing their own Tour de France."

Verhulst even imagines how the purple prose of Henri Desgrange might report the endeavour:

"Today, through an imaginary France, our professional boozers display their degenerate but immense energy. From Paris to the blue waves of the Mediterranean, from watery lager to pastis, from Marseilles to Bordeaux, from distilled vinegar to lukewarm wine. While passing through these sun-drowsed, pink and dreamy towns, cutting across the fields of the Vendée, up the entire length of the Loire, these men and women let the fluids cascade down their throats, frenzied, inexhaustible, knowing that along the way they will encounter all kinds of momentary blackouts and rising nausea they will have to shake off. Withstanding headaches and diarrhoea, they will tap new energy calling on their ambition to become something, even if only by the grace of a strong stomach and good liver function, which is still, after all, better by far than being absolutely nothing."

Quoting Dino Buzzatti - a sot like Antoine Blondin with an ability to create heroes out of losers might have been more appropriate but Buzzatti will do - Verhulst shows that cycling really is the national sport of the Belgians. In all its varieties.6

What lifts The Misfortunates out of the misery memoir ghetto is that it comes with the beauty and sadness of Gavin Bryars' Jesus Blood Never Failed Me Yet. And with humour. Humour as black as night, as black as the shades worn by Verhulst's beloved Roy Orbison. One of the difficulties with such humour, though, is that there is a border between laughing at someone and laughing with someone and there's no one at the frontier to stop you from crossing over. Verhulst himself seems aware of this problem, he mocks one character in the novel as someone who might watch with amusement a TV series about families like the Verhulsts. And when some folklorists take interest in the family's drinking songs he mocks their interest:

"It was an illusion to think that anyone was genuinely interested in ordinary people. [...] Easy pickings for the entertainment of a self-declared artistic bourgeoisie, that was the masses."

But the laughter ... the laughter - like the misogyny - is designed to serve a higher purpose, it's not giggles at grotesquery, a Sunday afternoon trip down to Bedlam. Here's Verhulst again, speaking to The European Short Story Network:

"I know people easily become immune to images and stories. So you have to... well, not shock them, because shock is too easy, too adolescent, in a way. But I love using humour as a way to cry. Humour is not just meant for laughing; it's meant to open our eyes. The best jokes have something that hurts in them. I did the same with The Misfortunates. Of course it's a sad story about someone's youth - mine - but, well, getting humour in it is the best way to open people's eyes."

Verhulst eventually escaped Arsendegem and his extended family - a fact for which he thanks the person who brought about his release - but you can never really leave the past behind. The Misfortunates tells stories of his family compassionately, Verhulst showing sorrow not so much for the world his family lived in, but for the part of them that he has left behind: their sense of loyalty. He still carries the name Verhulst with pride but having started the novel with ‘we' he ends it with ‘they' and ‘I'. And the feeling that he has lost something important along the way. If he's laughing at anyone here it's himself, not his family.