In what is proving to be a good year for cycling novels on the Café Bookshelf, we turn our attention to a London-set noir telling the story of a 1920s track racer and the criminal underworld he falls in with.

Share All sharing options for: Devil Take The Hindmost, by Martin Cathcart Froden 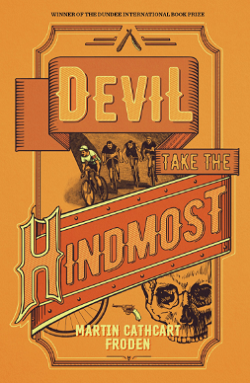 Title: Devil Take The Hindmost
Author: Martin Cathcart Froden
Publisher: Freight Books
Year: 2016
Pages: 316
Order: Freight
What it is: London-set noir telling the story of a 1920s track racer and the criminal underworld he falls in with
Strengths: A novel that rewards the reader with a well told tale and the opportunity to pause and think about a world now forgotten
Weaknesses: More slow-boiled than hard-boiled but with atmosphere aplenty

It's Good Friday 1929 and a record crowd has paid to see the cyclists. Down on the oval I watch Paul focus on his hands. Hands that used to handle white-eyed horses, deliver lambs, right fence posts blown over in the Campsie gales and put his drunk father to bed.

The Herne Hill grandstand sits dignified along the home strait of the velodrome and today it's full of clueless celebrities (Barbara Hepworth, Vita Sackville-West, Lord Pritchards, Riccardo Bertazzolo, the boxer) and people in the know (AA Weir, FT Bidlake, G Hillier - and me). The arena heaves under the pressure of people fighting, betting, spilling gin and smoking.

The cyclists line up and then Crack! With a jostle of elbows and straining thighs they're off. We're all cheering, all drinking, all hoping the weather will hold up so that we can see the boys swirl round the concrete bowl like so many eggs whisked for an omelette.

Paul gives himself over to the centrifugal force and to the animal he usually keeps caged in his lungs. Today he can't settle for anything less than a miracle. He lives by his lungs and by the grace of Mr Morton. I dry my hands on my trousers, something I've not had to do for many years.

About a third into the race Paul drops down the field. His grimace says he's hurting. My hands are now sweating so much the cummerbund of my cigar has become attached to my ring finger. I claw at the piece of paper like a married man given a once-in-a-lifetime chance to spend the night with Vilma Bánky.

So opens Martin Cathcart Froden's début novel Devil Take The Hindmost, a 1920s-set noir built around London's criminal underworld and Britain's track cycling scene. It tells the story of Paul McAllister, a Scottish farmer's son who washes up in London after falling out with his drunk father and is quickly liberated of his luggage, wallet and bicycle. A friendly local comes to his rescue, in the shape of Silas Halkias, a sunny man with a shady line in business: "a lowly moneylender and fixer of boxing matches, cock fights, greyhound races." Silas is, of course, no good Samaritan: if of that breed he would definitely be the black sheep of the family. He has ideas about how useful Paul could be to him:

I could put him to use in the yard out at Sandown if he knows his way around horses. Or make him a wrestler, smeared in petroleum jelly. His strong arms locked around another man's waist, in tight black breeches, no top.

Then the seeds of a new plan are planted:

‘Mr Halkias, look at that, what a beauty,' he says, pointing across the street, at two women holding bikes.

‘Which one? The tall one? I suppose if you like them gangly, horses for courses. But a word of advice, I'd steer clear of some women, ones dressed up that nicely, loitering on street corners. They're either married to someone richer than you, or not the marrying kind, if you know what I mean.'

‘No, no. The red bike. The BSA. That's their Path Racer, look at the sloping head tube, that's lovely. My bike was good, but no match for that. Look, it's even got aluminium rims. Amazing. People in London must be very wealthy.'

Paul proceeds to explain to Silas that, back in Scotland, he'd done a bit of racing, the sport having been in the family, on his uncle's side. Silas, though he may not know one end of a bicycle from another, knows enough to know that velodrome racing attracts a crowd. And where there's a crowd there's the prospect of gambling. And betting is his line of business. So Silas sorts out a new bicycle for Paul (actually a second-hand bicycle for Paul, a 1921 Iver Johnson Special, bright yellow), finds a trainer, Harry Wyld (who seems to be named after one of the Wyld brothers who made up three quarters of the team pursuit squad that collected bronze for Britain at the Antwerp Games in 1928) and enters him in a race. In Peckham.

That's right, that Peckham. Desmond's Peckham. Nelson Mandela House Peckham. London back then was filled with tracks to race on, legacies of the Victorian bicycle boom. Today, only Herne Hill survives. But back then, Balham, Catford, Kensal Rise, Paddington, Putney, West Ham, Wood Green, they - and more - all boasted cycling tracks of one kind or another. Curiously, despite the bazillion books that have been carelessly thrown on shop shelves over the last few years cashing in on the popularity of cycling in the UK and claiming to tell the history of British cycling from Victorian times to the current Elizabethan era, hardly a one of them ever mentions the interwar years. Between Arthur Linton and Reg Harris, hardly anything happened in UK cycling, if the published histories of it are to be believed. Which is just one reason why Devil Take The Hindmost makes for such an interesting read for cycling fans, not just for lovers of a good noir: it's a forgotten world, given life in an imaginative way.

As it's a Tuesday the crowd will be small but dedicated. Possibly even near to sober. Enthusiasts. Not just happy to be out in the sun, watching other people almost kill themselves, but knowledgeable. It won't be the gin-fuelled Saturday night revellers you sometimes get at the bigger velodromes, or the Sunday crowd who have decided to make a day of it; the ones who save up, steal, borrow, pay, to come and enjoy themselves, almost disregarding the racers. For the weekend crowd, the entertainment could be anything from tigers killing ocelots, to boxing, rowdy soapbox preachers, or bearded ladies on stilts. It just happens that this year they have decided to flock to cycling. Next year it might be something else. But today, at Kensal Rise, it'll be a crowd with stubs, with notebooks and pens behind their ears, mumbling odds and race pedigrees. Offering litanies to the gods who reign in the Kingdom of Money. Praying to the numbers they have chosen, or feel have chosen them.

Imaginative should not be mistaken for accurate. Devil Take The Hindmost is, first and last, a novel, not an historical treatise. Here, the whole point of researching the era is not to be able to reproduce a facsimile of it, but to be able to reproduce a version of it that feels plausible while serving the needs of the narrative. You can take real characters like the Wyld brothers and redraw them. You can place a cycling track in Peckham. You can give Paul equipment that feels like it could have been available to him. Like most of cycling's greatest myths, even when Devil Take The Hindmost is deliberately diverging from reality, it is still telling a greater truth.

But is it any good, do the real and the almost real create a believable world, does the narrative work? Well I quite enjoyed it. Ok, yes, I have a thing for crime fiction, but usually from the other side of the Atlantic and usually from Hammett or Chandler or one of them, the hard-boiled private eye variety. Noir, well I'm not always crazy about that: more than one Jim Thompson in a year and I'm reaching for the Prozac and that's probably how I feel about the genre in general: it's going to give me a bit of a downer. Cathcart Froden, fortunately, is not depressing. Well, not too depressing anyway, if you get past the bodies rolled up in carpets or a well-wielded cut-throat razor.

For the most part Devil Take The Hindmost rolls along at an easy pace, building atmosphere like a head of steam. Having done well in his initial races Silas pushes Paul to race more, venturing forth from London and racing in places like Brighton and Mansfield (the web of tracks left over from Victorian times extended well beyond London). Soon Silas's boss, Mr Morton, the boss of bosses for all the crime in and around the Elephant and Castle area of south London, is noticing Paul and his success, and he tugs him tighter into the criminal underworld by turning him into a courier for his numbers racket. Meanwhile, Paul himself is soon well out of his depth after meeting Miriam, whose all-woman gang of smash-and-grab artists is another part of Morton's empire, she - like Silas - another vassal of the lord of the Elephant and Castle.

Thinly drawn, the corpulent Mr Morton is your archetypal crime lord: controlling all in his employ and feared by all who have heard of him. After perhaps a longueur during which both Paul's racing pedigree and love for Miriam are established, we get to the meat and two veg of the novel, with Paul imperilled by Morton and needing to find a way out, giving the novel a pacey finale that pleases with its surprises and - thankfully - avoids that pitfall of so many cycling-related novels and doesn't dial the action up to an improbable eleven.

In 2015 Devil Take The Hindmost won Cathcart Froden the Dundee International Book Prize for unpublished novels, earning its author £10,000 and a publishing contract. Possibly, you could be forgiven for thinking, there is an element of cashing in here by the Dundee prize jury, the BBC's Peaky Blinders having shown a public appetite for Britain's between-the-wars criminal underworld. But I think here the jury were really rewarding a well written piece of fiction that is firmly grounded in a world that might have been. A novel that rewards the reader with a well told tale. And the opportunity to pause and think about a world now forgotten.