Triumphs and Turbulence, by Chris Boardman

Share All sharing options for: Triumphs and Turbulence, by Chris Boardman 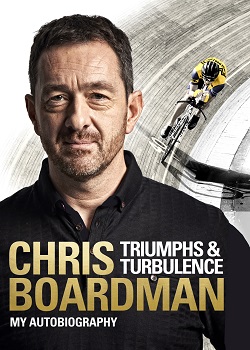 'Before the chat show begins I've got a bit of a plug I'd like to do for a new book I've just published, it's from Peartree Publications, the new publishing wing of my company and it's a collection of amusing sporting anecdotes. It's called A Funny Thing Happened On The Way To The Stadium...to Alan Partridge...by Alan Partridge. It's a stocking filler you know, it's not going to win the Booker Prize. Be nice to be nominated. Here's an extract. It's about the time I bumped my car into a well-known celebrity's...George Best! Shouldn't have told you that really - spoilt the surprise. Anyway, I'll read it: "I'd just finished having lunch with Geoff Capes the shot-putter at the Savoy and I was reversing my Ford Granada out of a parking space when Bang! I bumped into a very flashy Lotus sports car. ‘Who's driving that?' I wondered. You'll never guess. It was none other than George Best! ‘Sorry about that, George' I said. ‘Oh well' he said ‘I suppose we'll have to swap insurance details.' And I said ‘Yes.'" George Best. Marvellous.'
~ Knowing Me Knowing You With Alan Partridge

Cave diving in the Yucatan. That's how Chris Boardman, with his "trademark dry humour and everyman perspective," opens Triumphs and Turbulence, his long awaited and much delayed autobiography:

"Six torch failures, two valves blown and one catastrophic loss of an air supply between us in less than 20 minutes: if I hadn't had a big lump of plastic in my mouth I would have let out a sigh."

That comment just about sums up Chris Boardman for me. It could be the end of the world, fire and brimstone raining from the heavens, and I'd imagine Boardman standing there, arms folded, tutting and quietly chiding himself for having hung the washing out earlier: "Shame. It'll never dry in weather like this."

I should confess something before we go much further: I was never a fan of Chris Boardman1. In the same way I was never a fan of Damon Hill, with whom I think Boardman has more than a few things in common. Both were so focused in their prime that they seemed like personality-free zones. But both have become more real, less robot-like, in later life. More interesting. This year Hill has published a long awaited autobiography which, by all accounts, is actually quite good. Paul Kimmage wrote about it recently, sort of, recalling a conversation he had with Hill a decade ago:

- I'm curious that you have never written an autobiography.
- I wouldn't know what to write.
- But you've had such a fascinating life.
- It's not over yet.
- No, but there are sportsmen half your age who have already written two.
- Maybe I should do what Bob Dylan has done and make it into instalments. I don't know. I think that I'd want to write it myself and I just haven't found the time yet. And there are two sides to this: there's the sporting story and what I did in my career; and there's my life, which is a different story altogether. I haven't worked out how I would separate them yet.

Like Hill, Boardman's autobiography has been a while in the coming - he retired from racing at the turn of the millennium - and like Hill Boardman's autobiography has been self-penned (over two or three years, with editorial assistance from Gary Imlach2). There, alas, the comparisons between the two books end. For I don't think Boardman has yet worked out how to tell the two parts of the story, the personal and the professional, his life and his life in cycling. Triumphs and Turbulence - My Autobiography, like last year's Chris Boardman: The Biography of the Modern Bike - The Ultimate History of Bike Design (written ‘with' Chris Sidwells) and 2000's Chris Boardman - The Complete Book of Cycling (written ‘with' Andrew Longmore) feels like one of those things done to pay for a new extension, or send one of the kids to college, or pay for a holiday cave diving in the Yucatan. Not something Boardman particularly wanted to do, not something he felt compelled to do. Just something that pays the bills.

Like many of the just-paying-the-bills cycling autobiographies I have reviewed here on the Café Bookshelf - particularly the recent rash of chamoirs3 - Triumphs and Turbulence doesn't so much fail on account of what it is, it fails on account of what it could have been. What it is is a safe, competent, by-the-numbers story of a sportsman's career. All the anecdotes you'd expect are duly served up, right down to the celebrity angle of him having gone to school with Daniel Craig. If you have low expectations for these things and are happy to reread stories you've read and heard dozens of times already you'll probably consider it a tour de force.

What it isn't is the book its title promises: stories of triumphs and turbulence. Here, for instance, is the story of Boardman's second Hour, the enduring Hour, the last of the BHE Hours, the one that is still, today, the unofficial mark everyone knows is yet to be beaten even if we all pretend Bradley Wiggins actually holds the current record:

"Over the next 60 minutes, I produced the best performance of my sporting life. So good there's almost nothing to say about it."

(Thankfully, fans wanting to know more about that Hour, and the other two, have Edward Pickering's highly enjoyable The Race Against Time to tell them the story.)

Or here Boardman is in a triumphant mood, returning home to the Wirral after success in the Barcelona Games:

"I didn't like it. This was my home, my village, and these were the people I'd known all my life. I didn't want to be on a pedestal, have people staring when I walked past. I wanted to be anonymous, normal. It was hours before it all died down, and when it did I stepped out into the now quiet street to celebrate with an age-old tradition. I went to the Dolphin."

In many ways, Boardman seems to be still trying to be anonymous, even after he's turned his name into a brand that sells someone else's bicycles, even after he's accepted money from mega-media conglomerate Bertelsmann to publish an autobiography. Back then, after Barcelona, all Boardman "really wanted was to have my cake and eat it: to carry on pursuing the type of challenges I enjoyed as an amateur and make some significant financial progress at the same time." Little has changed in twenty-five years.

So, here, everything gets sanded down, smoothed out. Streamlined. Leaving no turbulence. Take Boardman's split with Lotus. Here it is in all its gory glory:

"A few weeks earlier I'd had a disastrous meeting with Lotus. We were there to discuss our continuing relationship and the possibility of attempting the hour record on a Lotus bike, but we got nowhere. At one point, a senior executive intimated that I should be grateful for being allowed to use their machine. I spat the dummy and we left with no agreement in place."

How about Greg LeMond allegedly having his nose put out of joint by Roger Legeay all but ignoring the former American star as he fawned all over the future British one? Boardman didn't see it at the time and - as with so many of the stories Boardman fails to tell here - hindsight adds no insight.

I could keep going on, pointing out how all the triumphs and all the turbulence are played down until you get a story that rolls along like a gently undulating road. But why do that when there's the humour to consider? Here's Boardman celebrating in Paris after finishing the Tour de France:

"In the basement of the Concorde La Fayette hotel we danced and drank and I seem to recall being on a stage, shirtless. But that's another story: what happens in the nightclub stays in the nightclub."

Or here he is on the Secret Squirrels:

"We continued to experiment with controlled roughness and other interventions that I am not able to discuss without the fear of British Cycling operatives breaking into my house under cover of darkness and neutralising me and my family."

And that's before he goes all Ned Boulting with a whole chapter on ITV 94's Tour de France coverage. This book should come with free sutures.

Having read so much about the topic elsewhere, I was actually looking forward to Boardman talking about the toll success takes on an athlete's personal life, the true price of gold, thought this was a man capable of offering insight into what it takes to be a successful sportsman. But the turbulence his career caused in his family life is, like so much else in the book, downplayed. Here, Boardman's marriage almost collapses in one paragraph but is saved in the next.

It's not that Boardman is totally without insight into his family life. For instance, here he is on the kids' nanny, Moira Gillespie:

"We first met ‘Moi' in September 1992 when she came down from her hometown to work in the new nursery at the end of the road. She started coming to us at weekends and gradually became part of the family.

"Her first job had been looking after the children of American service personnel at the US naval base at Holy Loch. It was there that she acquired the phrase ‘Love you bunches', which she mischievously used with our young and impressionable kids. It stuck, got shortened to ‘bunchies', and is still in use today. It will probably be passed down through generations of Boardmans to come, a legacy of which I'm sure Moira would be very proud."

What's at play here, of course, is that cake and eating it business: "Having a fairly public life, I value being able to walk away from the public spotlight and have a private existence." Which makes you wonder what the whole point of Boardman writing an autobiography is. Or the point of you reading it.