Share All sharing options for: Break Away, by Euan Ferguson 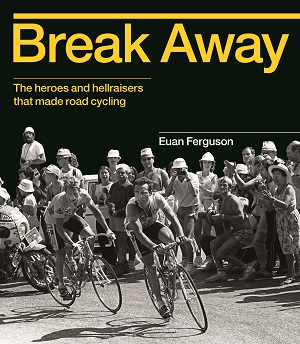 Title: Break Away - The Heroes And Hellraisers That Made Road Cycling
Author: Euan Ferguson
Publisher: Frances Lincoln
Year: 2016
Pages: 208
Order: Quarto
What it is: 50 people who made road cycling
Strengths: Brevity
Weaknesses: Selection

And so we turn, like a buckled wheel, to yet another cycling miscellany, this from the pen of Euan Ferguson whose previous books include Drink London - The 100 Best Bars and Pubs and Craft Brew: 50 Homebrew Recipes from the World's Best Craft Breweries. An editor with Time Out, Ferguson offers cycling fans what he describes as "a beautifully illustrated history of road cycling, from early velocipedes to the modern peloton, as told through the fascinating stories of 50 of the most important people to have stepped on a bicycle."

I'd describe it as a listicle.

A book for Buzzfeed browsers.

That's the sort of perversity that even De Sade would be shocked by.

Let's start with Mark Twain. A man whose sole contribution to cycling appears to be an essay he thought was so bad he didn't publish it in his lifetime but which, in the years since his death, has become one of the most important and least read documents for that class of cycling fan that seeks validation in the fame of other cyclists. If you've read the essay you'll agree with Twain's assessment of it. And wonder why he's on any cycling listicle.

What about Twain's British counterpart, HG Wells? Wells did at least leave to cycling more than a single deservedly unpublished essay, having penned novels and short stories featuring cyclists. Ferguson opts not to tell his readers about the seldom mentioned The History of Mr Polly, a novel that features cycling and is looked upon favourably by Wells's army of fans, but instead chooses the The Wheels Of Chance, which has been appearing on literary cycling listicles since the year dot and is a novel so awful that even Wells's ardent admirers find it hard to say something complimentary about it.

Whether Twain or Wells merit inclusion or not on this or any listicle is moot: but could we all please grow up and get past the stage where we're praising awful essays and awful novels just because they feature bicycles?

On the plus side, at least that other listicle perennial, Alfred Jarry, doesn't feature in Ferguson's selection. For such small mercies we should be extremely grateful.

The book's 48 chapters - the two Pélissiers and the two Bobets each share chapters - typically run two to four pages each and feature an introductory page with lots of white space and an inspirational quote.

That's followed by some brief text - a few hundred words - and images. The images themselves are nothing out of the ordinary: many are so over exposed they've become visual clichés, some are purely illustrative, marginally better than passport photos.

What you're getting for your money is perhaps best illustrated by example. This is the opening of the book's final chapter, on Peter Sloterdijk:

"Peter Sloterdijk is a cycling philosopher or a philosophising cyclist. Over his long career the German has straddled the worlds of academic and popular philosophy; in 2008 he gave a typically eloquent interview to the magazine Der Spiegel in which he described the horror he felt at the sport's dopers, compared with the awe of their prowess brought on by his own amateur ascent of the mighty Mont Ventoux. With his symbolic interpretations of cycling, he perpetuates a long tradition of writers turning their attentions to an essentially humble but contradictory pursuit. For the vast majority of those who ride bicycles, to do so is simply a convenient way to travel. It's not glorious, it's not lucrative, there's no suffering; it's actually quite pleasant. Those who make their money from it are a tiny minority, yet are granted legendary status. What is it about road cycling that has attracted such grand scale mythologising?"

Rather than spending the remaining few hundred words available to him by telling us about Sloterdijk and what, beyond some guff about doping and the Ventoux, justifies his inclusion on a listicle of 50 of the most important people to have stepped on a bicycle Ferguson launches into a paragraph on ... Alfred bloody Jarry.

Oh Lord, why do you torture me so?

From Jarry we move on to a paragraph about Roland Barthes. Some of you may have heard of him, he wrote an essay one time on the Tour de France. Not a lot of people know about it.

Okay, well, at least now we know where Ferguson is going here: listicles within a listicle, this one of cycling intellectuals. Who's next? No one. No Robert Redeker. Not even Dino Buzzati, Antoine Blondin or Paul Fournel. Instead, this: "The only other sport that's had a comparable level of serious intellectual attention is boxing, which shares with cycling suffering, danger as spectacle, and the necessity of absolute dedication."

Look, I like cycling as much as you do, honest, but come on, let's be reasonable here: sure, yes, a few people have waxed philosophically and entertainingly about cycling. But many, many more have waxed philosophically and entertainingly about soccer and baseball and loads of other sports. Cycling, it's not special. Cyclists, we're not unique snowflakes.

Ferguson does return to Sloterdijk, briefly and tellingly, before wrapping up, with this quote: "If you pull down the sport's dimension of honour, and its symbols, everything ends." Kill the myth, kill the sport? Quick! Call the homicide detectives and have them arrest Benjo Maso! But this is what Ferguson apparently actually believes. Which explains why so much of what he has to say throughout Break Away is apocryphal, exaggerated or downright wrong.

Kirkpatrick Macmillan? His contribution to cycling is today seen by many as being up there with Leonardo da Vinci's: bogus. Did Eddy Merckx really rip the Hour record "into so many pieces it stayed his for decades"? Only if you accept the airbrushing from history of Francesco Moser, Graeme Obree, Chris Boardman, Miguel Indurain, and Tony Rominger. Which Ferguson doesn't, talking about several of them. Or how about this: did we really have to wait until 2015 to get "the first ever African team" at the Tour? Or this: "In 1985 the first American team, 7-11 [sic], entered the grand European tours, and the trickle of [American] riders turned into a flow." MTN was far from the Tour's first African team. And Robin Morton had put American teams in the Giro d'Italia and the Vuelta a España before 7-Eleven took their first Giro start. How many times do these claims have to be corrected before people stop repeating them?

When all you want from cycling is some bedtime stories, truth is something that can comfortably be sacrificed.